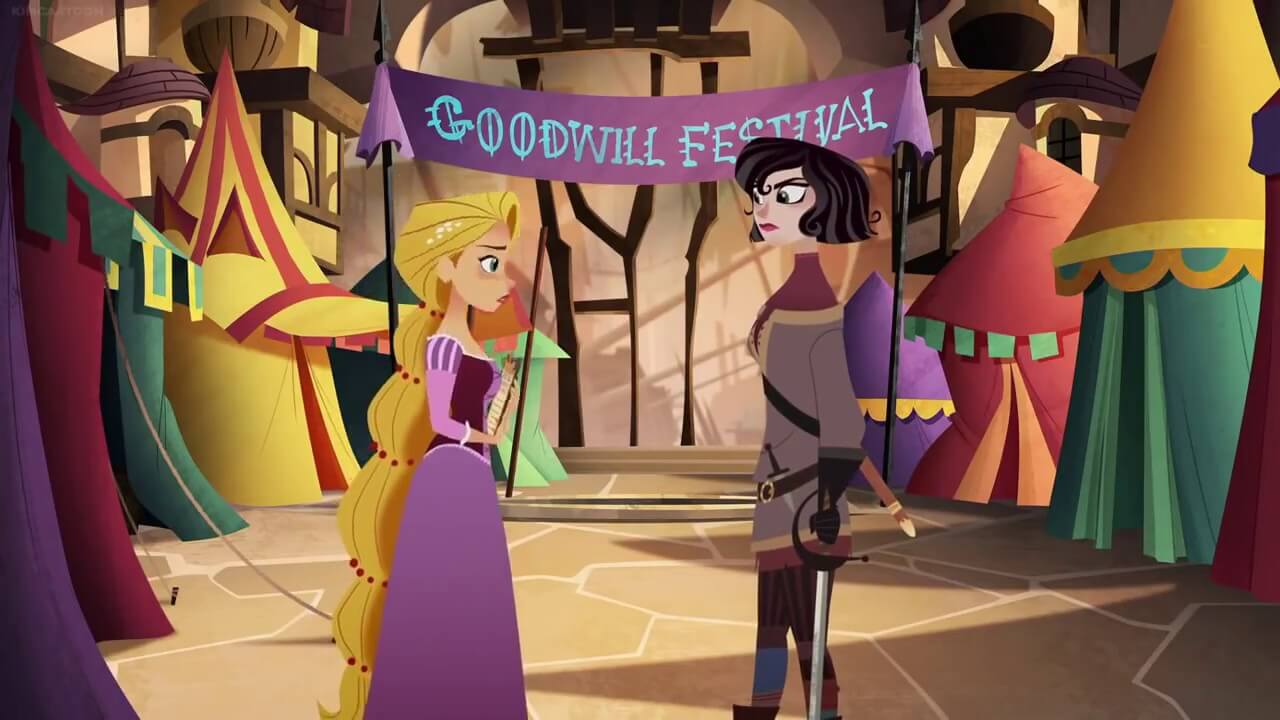 This week on Rapunzel’s Tangled Adventure, Rapunzel wants to bring Corona’s Goodwill Festival to Vardaros. Being a surly bunch by nature, the people of the city don’t want to participate. One man tries to steal the pen used for signing the roster, but Cassandra wrests it away from him. She challenges the people to wrestle her: if they fail to get the pen from her, they have to sign up for the festival. This idea manages to excite the people and impress Quaid, so Cassandra becomes co-festival planner, with Vex eager to be her helper. This causes rivalry between the friends and growing frustration for Rapunzel, as even Eugene prefers Cass’ events. However, he points out that the important thing is for everyone to have fun. He also suggests that Rapunzel and Cassandra get together and talk about it.

Throughout the episode, Lance and Hookfoot look for a gopher for Rapunzel’s gopher grab event. Rapunzel goes to Cass’ tent looking for her, but Cassandra accuses Rapunzel of trying to steal her ideas. On the day of the festival, Eugene handcuffs Rapunzel to Cassandra in an attempt to force them to work together. It turns out that the guys got a Sneeze Weasel instead of a gopher, resulting in disaster. Quaid, Lance and Hookfoot are thrown over a cliff by the creature, but Vex and Eugene manage to get them back to safety. Rapunzel and Cassandra trick the Sneeze Weasel, and he gets stuck in Quaid’s honey. The gang departs Vardaros, and while Vex is happy to see Rapunzel go, Quaid remarks that she really made a positive difference for the city.

I have mixed feelings about “Goodbye and Goodwill.” While watching it, the first thing I noticed was the return of Cassandra’s nasty personality. In “Beyond the Corona Walls” and “The Return of Quaid” she was nice, if a little passive; in “Goodbye and Goodwill” she’s straight-up mean and annoying, something that bothered me intermittently throughout season one. Another annoying holdover from the first season is that the onus for fixing the situation is placed on Rapunzel, without Cass even apologizing for being a turd until the very end. As the lead character, they probably want to just give Rapunzel all of the “lessons,” but in cases like this, it doesn’t work. 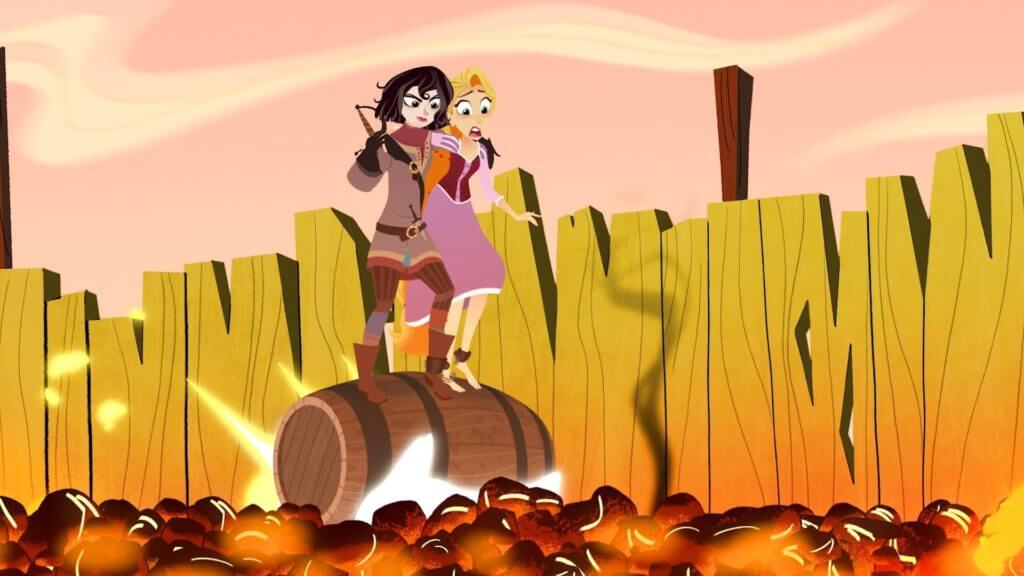 Cassandra spends the entirety of “Goodbye and Goodwill” instigating Rapunzel and being competitive, like a child. How are we supposed to feel that Rapunzel is responsible and owes her friend an apology? Why are these two even friends? This aspect is exacerbated by the presence of Vex, who is basically a tiny version of season one Cassandra. Even at the end of the episode Vex treats Rapunzel callously and is happy to see her and her friends leave Vardaros. For a Disney Princess TV show intended for children, this feels incredibly mean-spirited. And what’s the point? Vex isn’t cute or likable or even funny, which I think is the intent. She’s just a little brat. She may be Quaid’s deputy, but she needs a spanking and a timeout.

That being said, I do find it funny whenever checks in with Lance and Hookfoot. The sloppy drawing of a gopher pretty much gives away what will ultimately happen in “Goodbye and Goodwill,” but I thought it was entertaining enough anyway. Although he doesn’t get the spotlight, I think Eugene has some of the episode’s best bits. His advice to speak openly with Cass is good, regardless of Cass being an emotionally retarded two-year-old, incapable of giving Rapunzel time to get three words out. I also liked how he’s willing to take on the Sneeze Weasel himself and was quick to jump in and help the others.

I think this season’s premiere gave me pretty high expectations, but it seems that the episodes between big story/musical episodes are, for the most part, going to be about the same as season one. I liked the first season, but I didn’t love it, and I was hoping to love this one. “Beyond the Corona Walls” was great and had good musical numbers, and I was hoping that would a constant going forward. This isn’t a problem unique to Rapunzel’s Tangled Adventure, however; I’ve noticed this about a few children’s TV shows, especially ones based on a preexisting property. The original Tangled is one of my favorite Disney movies, and it’s perfectly self-contained. So while it puts a lot of pressure on the TV series, it also doesn’t lend itself to obvious continuations. I think this show — and a lot of others like it — just doesn’t know what to do with the characters. Eugene and Rapunzel feel more simplified than in the original film, and the villains are less threatening for the most part. 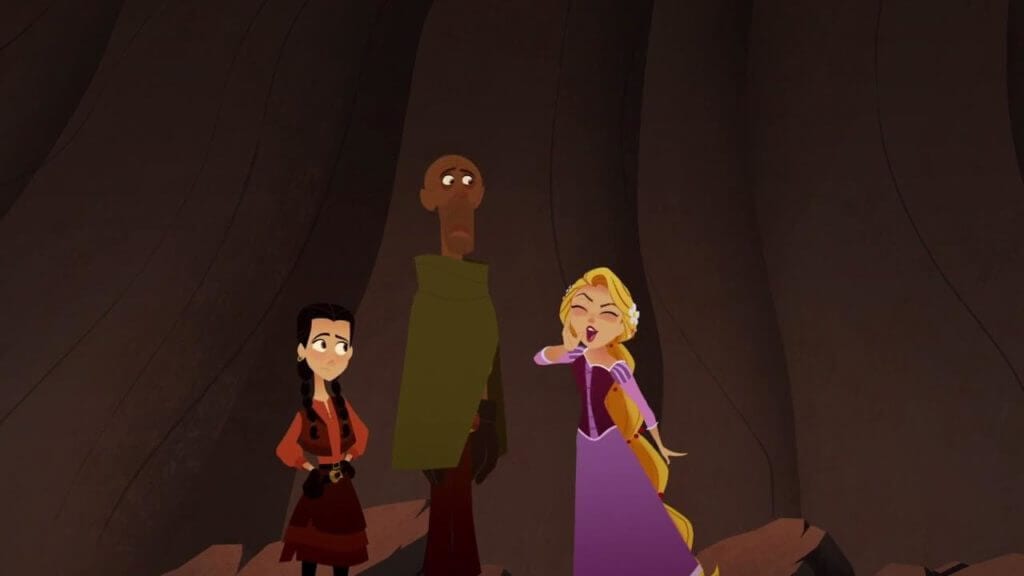 When they introduce something interesting, like Quaid or Adira, they never do much, and these characters and plot elements feel thrown together. I understand that, being serialized, the show will have some filler. Disney films also have very different budgets and target audiences than their TV shows.  At times, though, I can’t help feeling that the “in between” episodes could be made to feel more connected to the film and even the better, grander episodes of the series. This show is aimed primarily at small children, but personally, I don’t care. I’ve never liked the “it’s for kids” excuse when it comes to any entertainment, but especially animation from major studios. Another recent Disney animated series, Gravity Falls, didn’t have these issues, and the majority of Disney films have something for adults to enjoy and a little more going on beneath the surface. Moreover, let’s say it is just for kids. Why should that mean less effort is put into it? The writers, animators and directors should be held to different standards because children have lower expectations? I’ve never understood this line of thinking. A film or TV series will be targeted to certain demographics, but in my experience, the good ones work so well that anyone can enjoy them. I enjoy Rapunzel’s Tangled Adventure as a continuation of the characters I love, but I can’t help finding it lacking in some areas, especially in “filler” episodes.

I enjoyed “Goodbye and Goodwill” OK, and loved the scenes with Eugene, Quaid, Lance and Hookfoot. But pretty much anything involving the villagers or the primary female characters left a bad taste in my mouth. Vex and Cassandra annoyed me to no end, being childish and treating Rapunzel (the main and best character) like an outcast who isn’t good at anything. At times I got the distinct feeling that the writers aren’t capable of or willing to reach for more interesting conflicts and character interactions. The original film set the standard pretty high, but even when I consider that this is a Disney TV series intended for little girls, I think some things could be handled better. I’ll keep watching because I love Rapunzel, the music and the voice cast, but “Goodbye and Goodwill” left something to be desired.

I enjoyed “Goodbye and Goodwill” OK, and loved the scenes with Eugene, Quaid, Lance and Hookfoot. But pretty much anything involving the villagers or the primary female characters left a bad taste in my mouth. Vex and Cassandra annoyed me to no end, being childish and treating Rapunzel (the main and best character) like an outcast who isn’t good at anything.