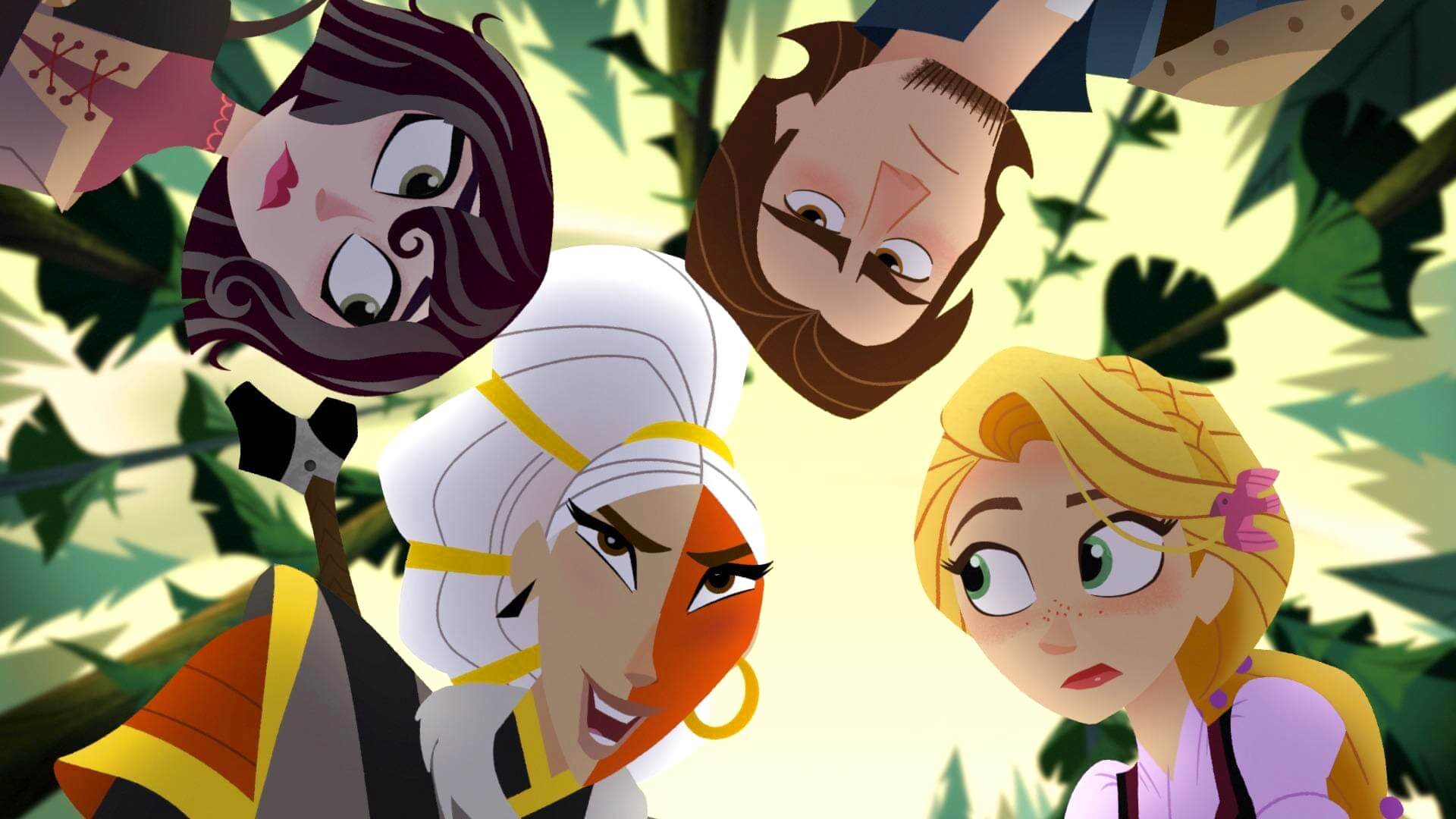 In “Forest of No Return,” Eugene saves the gang from a pack of wolves. However, his thunder is quickly stolen by Adira, who shows up and insists on leading everyone through a particularly tricky forest. The forest, known as the Forest of No Return, changes all the time, trapping and confusing travelers. It’s also filled with creepy critters, from huge flies to “pupshrooms.” As Adira bests each creature and bypasses every obstacle, Eugene becomes increasingly jealous and disheartened. Adira assigns each person a nickname based on a trait, much to (almost) everyone’s frustration. The most annoyed is Eugene, whom she calls “Fishskin.”

He’s finally had enough when, at dinner, Lance openly says that Eugene should take notes from Adira. He ziplines everyone over a field of hot geysers, against Adira’s wishes to run through it. This gets the group lost, without Adira or a special map she has for traversing the enchanted forest. Eugene makes his way out, finds Adira, and apologizes for his behavior. He says that he wants to be in control again and doesn’t feel like the adventurous swashbuckler he once was. She uses her map to locate the others, and explains to him that Fishskin, his nickname, is perfect for making strong glue and that he keeps the friends together with “laughter and warmth.” At the edge of the forest, Adira goes her own way, with everyone on good terms and leaving Eugene with an improved sense of self.

“Forest of No Return” is yet another episode about which I have mixed feelings. I’ve never thought an episode of this series was bad, but besides the hour-long musical episodes, they’re usually burdened with annoying character moments and unnecessary plot elements. I like the different places they’ve taken the characters and the adventurous tone they’re going for, but at times I wish the creators would focus on what people loved about the first movie to begin with. I want to like Adira, and initially thought I would. She’s pretty, has a cool name and an air of mystery. But she’s really annoying in this episode. They grill Eugene for being arrogant and wanting things done his way, but Adira does the same thing. And she gloats the whole time! Even at the end when she leaves the group, she remarks that she is “amazing” and “a champion.” Last time I checked, it wasn’t cool to say things like that about yourself, especially if you presume to teach someone else a lesson in humility. It’s very easy to sympathize with Eugene as he gets repeatedly embarrassed by the outsider, and his friends take her side. It’s true that he could have been more mature about the situation, but it’s a situation he shouldn’t have to be in. They can have Adira take the lead without making one of the main characters look bad. It’s just uncomfortable to watch.

That being said, I actually like Eugene’s arc in “Forest of No Return.” It’s nice for them to point out how much he has changed since the beginning of the first film. I enjoyed seeing him fight the wolves in the beginning, and I love his talk with Adira after he gets everyone lost; I just don’t necessarily think that what happens between these two sequences is the best way to get there. I also don’t think he’s the only one who should have apologized, or that Adira has any room to teach someone else humility. It also feels like Rapunzel should have been more supportive. She defends him a couple of times, but her comments are played for laughs, and she ultimately puts her faith in Adira. This feels so wrong. Throughout the series thus far, their relationship has been on and off for me. It’s like the writers, depending on the episode, didn’t watch the movie or don’t like these two as a couple or something.

Rapunzel has had an episode about how she met Pascal and frequently refers to Cass as her “best friend.” Where does that leave her future husband? They seem almost like a casual high school couple who argue about stupid topics, only occasionally hold hands, and apparently aren’t always there for each other. This is a poor reflection of what they were in Tangled. At times Rapunzel feels like a very different character — a flatter, less interesting character who frequently has to learn unnecessary “lessons” and gives unneeded apologies. Between this and Eugene’s treatment in “Forest of No Return,” I’ve concluded that this show has a bizarre sense of right and wrong. If one person is antagonizing another and the second party reacts understandably, they do not owe the instigator an apology. What a bizarre thing to teach children, and they’ve done this 4 or 5 times now.

The visuals in “Forest of No Return” are excellent. There are lots of interesting backgrounds in the forest and a great contrast of color scheme. I particularly love the “flowers” the group encounters near the end of the episode. One thing I appreciate is how they’ve shown lots of places outside of what we saw in the movie, and each new location looks and feels unique. They’re really creating a whole world around Rapunzel’s tower and the Kingdom of Corona, and that’s pretty cool.

I want to love this show; I really, really do. I like the animation style, I love that the main actors came back, and there are things I love about almost every episode. But kids’ series tend to have a moral of some kind for each episode, and sometimes this show comes up with some pretty weird and convoluted ones. As a viewer, it’s frustrating to have someone apologize when you feel that they weren’t wrong, or that the other person should reciprocate and they don’t.

While “Forest of No Return” doesn’t have a villain, I think the episodes that do really underwhelm with their baddies. Big Hero 6: The Series, for example, seems to be doing this much better. The villains in Tangled the Series/Rapunzel’s Tangled Adventure have been nonentities so far, with season one’s Lady Caine being a perfect example. I remember a lot about season one, but this character is just a name and a face to me. She showed up twice, told some sob-story about her father (that’s never explained or developed), and got put in jail. What was the point of that? She wasn’t sympathetic, threatening or entertaining in any way.

Overall, “Forest of No Return” is a perfect example of everything I love and don’t care for about Rapunzel’s Tangled Adventure as a whole. The visuals are good, the voice acting is good, and I genuinely want to see more of these characters. But the series has flattened them and seemingly goes out of its way to teach them lessons that sometimes don’t feel appropriate for the character and can come off as mean-spirited. I really would like to know more about the creative process behind this show, how they plan out each episode, and what their long-term intentions are for the characters.

Eugene deserves his own episode, and his development is good here, but I don’t understand why the journey has to be cringe-inducing and led by a character who I increasingly wish death upon. I don’t know why they feel like they need to dumb down characters and relationships from Tangled; it was already a family movie, and not too complicated for children to understand and enjoy. Rapunzel and Eugene seem, in this series, like casual friends who occasionally kiss and hold hands. It’s just strange and feels disingenuous. In fact, after everything they went through together in the first movie, I find it difficult to believe she would reject his proposal, and that has bothered me since the very first episode of season one. They made her reluctant to settle down, presumably so she could have an epiphany about it this season, but it just doesn’t feel right for the character. Her friendship with Pascal has been minimized, undoubtedly to make room for Cassandra and because he is nonverbal. Again, this doesn’t feel right, because she’s known Pascal her whole life and taken him everywhere.

I enjoyed “Forest of No Return,” but just a little. This series makes some pretty big mistakes, and it seems to like making the same ones over and over. Event episodes like season premieres and finales are awesome, but everything in-between lacks that energy and often feels like filler. I don’t think filler is bad by nature — it’s neutral — but some series use it to their advantage to build character and a sense of fun, while others stagnate and lose sight of the grander narrative. I’d say Rapunzel’s Tangled Adventure is somewhere in the middle, but I can’t deny my growing frustration with it. Spin-offs/sequels/continuations/whatever should tell their own story and not retread what’s come before, but they should have the fans and the intent of the original work in mind while doing so. It feels like this show doesn’t really care about being consistent with some elements of Tangled or re-capturing what made it special. That’s OK, I guess, and better than a lot of Disney’s made-for-TV content, but it’s sad. It feels like more could be done with this series, but they would rather show two characters arguing about something ridiculous, and have the offended party apologize to the offender. I’ll still watch Rapunzel’s Tangled Adventure to keep up with what happens, experience the undoubtedly amazing musical episodes to come, and see if these elements are improved upon.

I enjoyed “Forest of No Return,” but just a little. This series makes some pretty big mistakes, and it seems to like making the same ones over and over. Event episodes like season premieres and finales are awesome, but everything in-between lacks that energy and often feels like filler. I don’t think filler is bad by nature -- it’s neutral -- but some series use it to their advantage to build character and a sense of fun, while others stagnate and lose sight of the grander narrative. I’d say Rapunzel’s Tangled Adventure is somewhere in the middle, but I can’t deny my growing frustration with it.