This week on Rapunzel’s Tangled Adventure, Cassandra furiously practices swordplay with her left hand. Explaining to Lance that she can’t afford to take a break if she wants to be at her best, it’s apparent that she’s angry with Rapunzel for the incident at the Great Tree. Eugene and Maximus tell the group that they’ve located the caravan, but it’s broken. Rapunzel volunteers herself and Cass to go for supplies, really as an excuse to try to get Cassandra to talk to her. On the way, the two come across a river swimming with piranhas. Rapunzel offers to help Cass across, but she declines, instead climbing across a tree with her injured hand. They find an abandoned town consumed by the rocks and an apothecary cart with various reagents to cure illnesses and cast spells. That night, a memory wand falls into Cass’s lap just as the two are arguing about the events at the Great Tree. Cass says she wishes Rapunzel would just forget the whole thing. Cassandra’s wish has unintended consequences, as the wand really works and Rapunzel’s memories revert to her time in the tower. Cass immediately gets to work on a counter-spell, but it’s complictaed and requires a lot of ingredients. However, just as the potion is almost complete, Rapunzel sneaks off in pursuit of mint, believing Cass to make soup. Cassandra finds her fighting a goat for the mint, and they head back. That night Rapunzel looks up at the stars and realizes that they’re going away from the tower, not towards it. She turns on Cass and runs away. Soon, all of Rapunzel’s friends are looking for her. Lance unwittingly wanders into a trap laid by Rapunzel for “ruffians,” and soon he and Eugene are hanging over the piranha-infested water. Cassandra tells Rapunzel the truth and persuades her to drink the potion, restoring her memories. She finally admits that she is still mad about what happened at the Great Tree, but she says she will get over it and be OK. The two reconcile and embrace.

In “Mirror, Mirror,” the crew is all getting on each other’s nerves. Rapunzel’s drawing is making a scratchy noise, Cassandra’s sword practice is loud and obtrusive, Lance won’t stop whistling, and Eugene keeps looking at himself in the mirror. Rapunzel encourages everyone to try to get along, despite being shut in together due to the rain. They pass by a large house made of shells and decide to investigate in spite of Cassandra’s reluctance. They’re greeted by a Frenchman named Mr. Matthews who gives them all rooms and food. Even in their new surroundings, the friends can’t seem to stop bickering. Cass confronts Rapunzel about the house, pointing out how weird it is for such a nice place to be sitting in the woods. Their conversation is cut off by the announcement that dinner is ready. During the meal, Rapunzel observes changes in Shorty’s behavior: he uses silverware and napkins, displays perfect table manners, and is completely coherent. She tells Eugene about this, and they see Lance get sucked into a mirror and replaced by a clone. They tie up the impostors and tell Cass what happened. They all decide to quiz one another to make sure they’re not impostors themselves. Eugene, Rapunzel, and Pascal pass their tests, but Cass releases the fake Shorty and Lance. Soon, all of the real friends are trapped in the mirror except for Rapunzel and Pascal. The two cleverly trick the copies into touching the mirror, giving their companions the perfect chance to switch with their doubles. Despite all of this, they decide to stay with Matthews one more night instead of going out in the rain. The camera pans to an axe lodged in a tree stump just outside the group’s caravan. 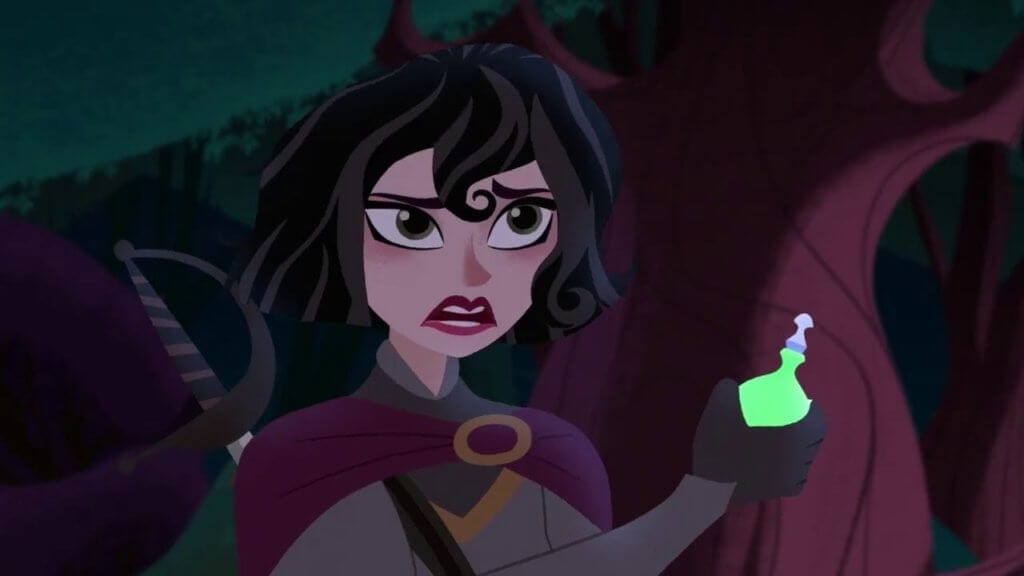 I like that “Rapunzel: Day One” is confronting the injury to Cassandra’s hand, rather than ignoring such a major development or passively incorporating it into her persona. I don’t like Cassandra as a character, but this is a pretty serious consequence of the events in “Rapunzel and the Great Tree,” and it’s easy to understand her pain and anger. I also find it interesting that, despite loving Rapunzel and generally disliking Cassandra, I can’t decide who I agree with here; it’s true that Rapunzel had things well in hand with the Tree until Cass stepped in, but one could also argue, as Cassandra does, that Rapunzel never should have used the incantation to begin with. But while Cass says that she could have dealt with Hector/the Tree, I’m not sure that’s true. This is genuinely a complex argument the two are having, and I think they’ve really created an interesting conflict here. It also feels like a pretty bold move to disable a powerful female character like Cassandra, and by the way her hand looked in the earlier episode, I don’t think they’ll be reversing this crippling injury. Based on some of the episodes and plotlines in season two, I’m surprised to say this, but it really feels like they’re making some brave, clever choices here. I’m curious to see where this conflict between the two friends goes, or if this is the last we’ll hear of it. The fact that Cass resents Rapunzel and blames her for the effects on her hand is pretty dark for a show like this. I do have questions about the extent to which her hand is crippled, though. They make it a point to display that she can no longer fight or hold a sword with her right hand, and the injury motivated her to replace her squire-like outfit with a suit of armor to protect her going forward. Yet she seems to be able to hold some things with her hand and uses it to climb across the river early in the episode. It could be that I’m being a little picky here, but it seems like they’re simultaneously showing the injury to be debilitating in some scenes and negligible in others. I also wonder if this could be a condition that could potentially spread up Cass’ arm and to other body parts, although that may be an unlikely development in a kids’ series.

I also really enjoyed the way they revert Rapunzel when her memories are erased. Normally I hate stuff like this because I like to see characters develop rather than regress. But in this instance, the concept is used effectively because Cassandra learns something about Rapunzel by seeing her this way. Rapunzel’s fears and anxieties both of and caused by her mother, as well as her optimism and yearning to explore the world, are brought to the forefront of her personality, and Cass seems to find a new appreciation for her quirky friend. I also like Eugene’s reaction when he sees Rapunzel like this, although I wish he had been in the episode more. I’ve said similar things before with this show, but while I can appreciate episodes about certain characters, it bothers me how they sideline or ignore the rest of the cast. “Rapunzel: Day One” is about the two women and their friendship, and that’s great. I’d argue that it was sorely needed at this point, much like Cass’ flashback in “Rapunzel and the Great Tree.” But Eugene is Rapunzel’s true love, and their relationship was one of the best parts of the movie and one aspect that made the series a must-watch for me. I guess the creators just don’t know what to do with these two as a couple, as they’ve “Flanderized” Eugene and made him into a punchline. He’s treated at times like a background character or a sidekick when he should be the co-lead. It also feels like they rely too much on the Flynn Rider persona, a facade in the original film that he ultimately ditches when he meets someone who values him for his true self. I might be asking too much of a Disney Princess TV show, but honestly, they should strive to match the film’s tone and honor the characters’ arcs from it.

As for “Mirror, Mirror,” I like it, although it’s a bit more episodic than “Rapunzel: Day One.” I’m not even sure why they were released together, as the stories don’t necessarily connect any more than any other two episodes. I like the notion of the friends bickering and having problems and then being confronted with agreeable, flawless versions of themselves. I’d like more explanation of Matthews, the shell house, and exactly what the clones are. I like the concept of the copies, and they are plenty creepy, particularly that of Rapunzel. I also appreciate that the friends realistically annoy one another, and the wake-up call they have as a consequence of their encounter with their copies. I do wonder what the significance is of the axe we see in the very end, and if the events of this episode will have any relevance going forward. It’s interesting that the group would elect to stay with Matthews after all they’ve seen and been through, and I can’t help but guess that they’ll come to regret that choice.

“Rapunzel: Day One” creates some inconsistency with regards to the seriousness of Cassandra’s hand injury, and sidelines one of the series’ best characters in an annoying fashion. That being said, it’s also a bittersweet exploration of a serious conflict between two friends, either of whom could ultimately be right. This episode contains beautiful visuals and asks some surprisingly poignant questions. “Mirror, Mirror” is less successful overall, but possibly less flawed too. While I have fewer issues and questions with this episode, it’s also more filler-y and lacks its predecessor’s intrepidity and emotional punch. But I like the idea of the clones (or whatever they are), and the shell-house is a genuinely creepy setting. I wonder who owns the axe in the end, and I think we’ll find out soon.

“Rapunzel: Day One” creates some inconsistency with regards to the seriousness of Cassandra's hand injury, and sidelines one of the series’ best characters in an annoying fashion. That being said, it’s also a bittersweet exploration of a serious conflict between two friends, either of whom could ultimately be right. This episode contains beautiful visuals and asks some surprisingly poignant questions. “Mirror, Mirror” is less successful overall, but possibly less flawed too. While I have fewer issues and questions with this episode, it’s also more filler-y and lacks its predecessor’s intrepidity and emotional punch. But I like the idea of the clones (or whatever they are), and the shell-house is a genuinely creepy setting. I wonder who owns the axe in the end, and I think we’ll find out soon.