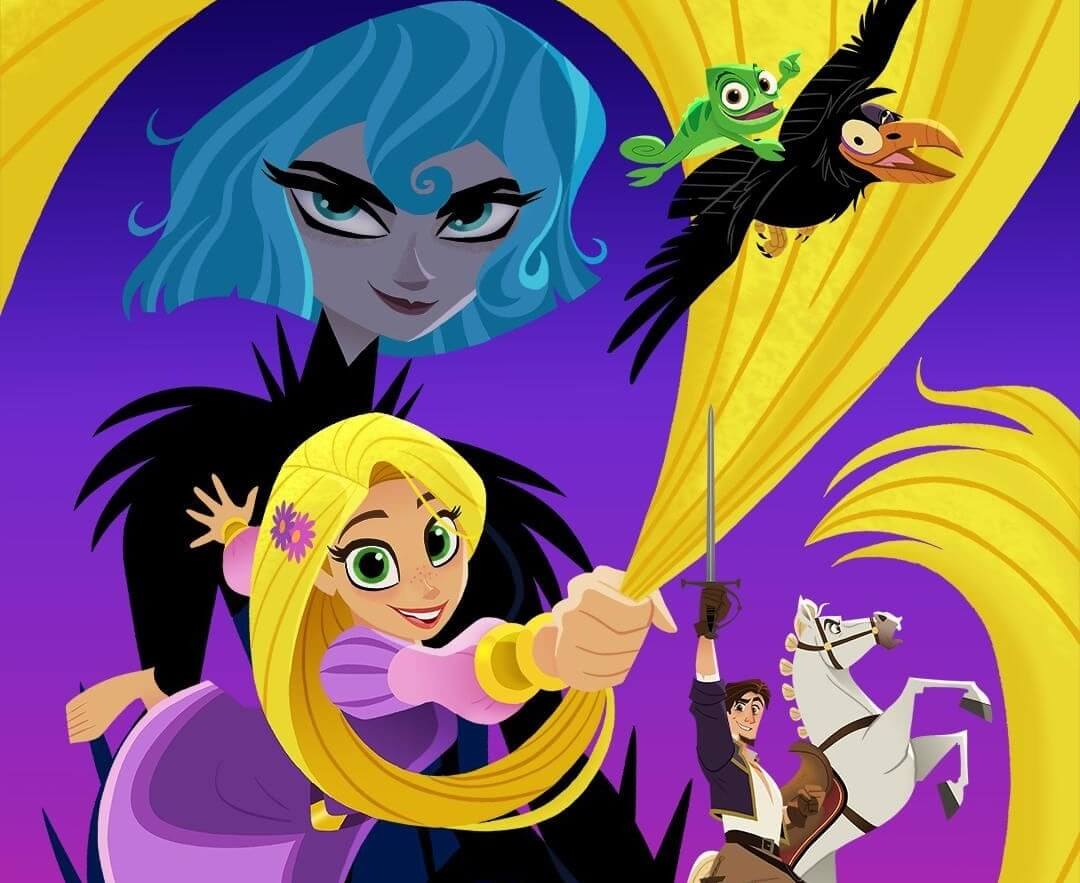 Tangled is one of my favorite Disney movies, featuring gorgeous animation, fantastic music, and interesting, well-developed characters. So far, the Disney Channel follow-up, Rapunzel’s Tangled Adventure, has been more mixed in quality. However, I had hoped the third and final season would go for a more consistent tone. While only time will tell, “Rapunzel’s Return” is a surprisingly fantastic season premiere.

Following season two’s epic conclusion, “Destinies Collide,” we’re dropped right back into the action as Cassandra reveals her true colors (well, really just a lot of blue). After fusing with the Moonstone, she explains that she’s been denied everything her whole life and intends to reclaim it. We’re treated to a flashback to Cassandra’s early childhood by way of a ghostly entity within The House of Yesterday’s Tomorrow. This is what Cassandra saw in “Rapunzeltopia,” and what has motivated her to turn against her friends. In short, Cassandra is the biological daughter of Gothel, cast aside in favor of sundrop Rapunzel. In the present, Rapunzel retorts that this makes her and Cassandra like sisters, even closer than they thought. She tries, as always, to work things out, but Cassandra isn’t having any of it. Cass sets off to her destiny, leaving the others to theirs. Adira simply says that her destiny leads elsewhere, heading off as well. The others aren’t left to contemplate for long; Ulf arrives in a hot air balloon and mimes a message to Rapunzel: Corona is in trouble and needs her help. 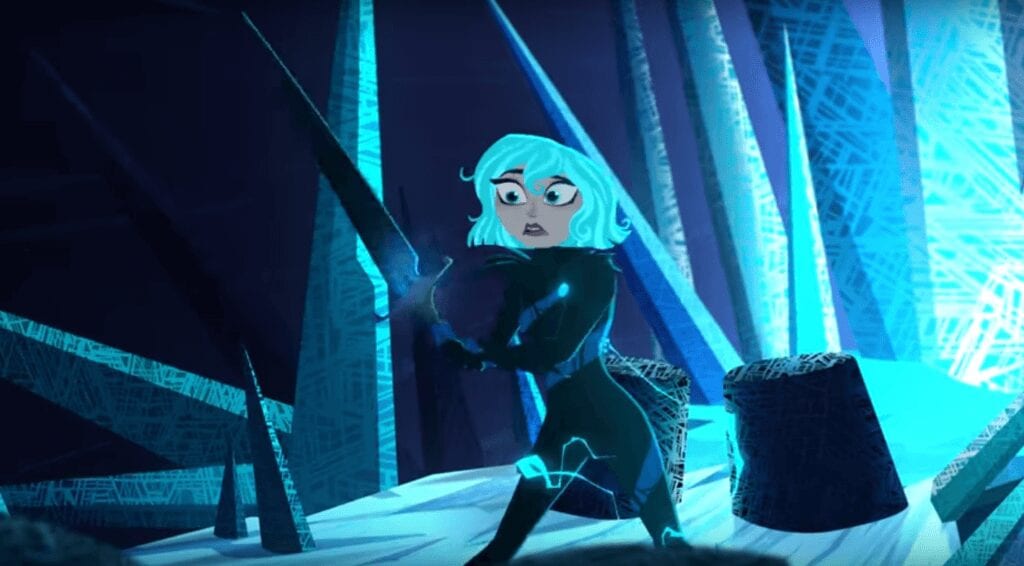 She and her remaining allies climb aboard his balloon, and once they get home, it’s clear that something is very wrong. There are no people in the streets, and they soon discover why: Rapunzel’s parents, the King and Queen, have handed down an order that everyone mine a particular mineral. Of course, all is not as it seems, as the King and Queen can’t remember Rapunzel, or much of anything. Varian has allied with Andrew and his Saporean Separatists in a bid to overthrow the Coronian monarchy and make everyone forget about Varian’s past misdeeds. After a defeat at the hands of the Separatists, Rapunzel and her friends retreat and hide. However, she sneaks off alone to save her kingdom. Unfortunately, she is caught, captured, and placed in a holding cell. Andrew and his cronies are willing to go further than Varian, who just wants to avenge his father and redeem himself. Naturally, this causes problems, and they toss Varian in a holding cell with Rapunzel. The two talk things out, with Varian realizing that Rapunzel is still willing to forgive him and make peace. Just then, Eugene and Lance show up and bust them out. Rapunzel convinces the guys to let Varian join and help them. 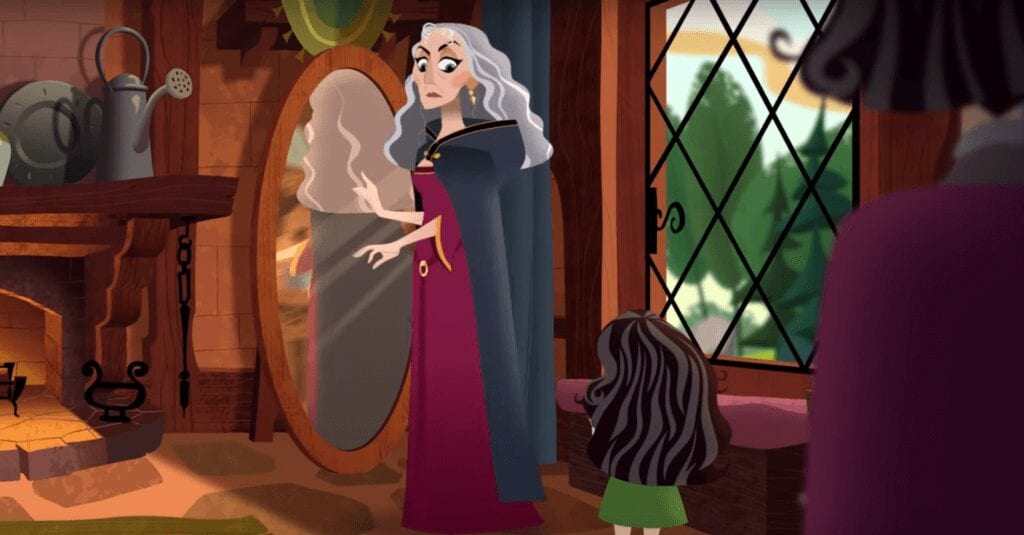 Meanwhile, Andrew sends the King and Queen careening away in a carriage to their doom. Rapunzel and Varian are off to prevent the Separatists from using Quirinium, Varian’s special element, against the people of Corona. She sends Lance and Eugene to follow the carriage with her parents. Rapunzel tosses Varian to safety and flies the balloon carrying the Quirinium thousands of miles into the air and away from Corona before blowing it up and falling to safety herself. Maximus and Fidella ultimately save Rapunzel’s parents from going over a cliff, but Kai, Andrew’s crony driving the coach, falls anyway. A celebration is held in Corona, and Rapunzel tells Eugene she’s finally ready to sit down and talk about what happened with Cassandra.

I had some pretty significant issues with Season Two of Rapunzel’s Tangled Adventure, namely the sheer amount of filler and inconsistent tone. However, the last few episodes and Cassandra’s turn were handled masterfully. It looks like season three is going to do a fantastic job at tying everything together if “Rapunzel’s Return” is any indication, and I can’t wait to see it. Fans have been observing since the show’s premiere TV movie that Cassandra looks too much like Gothel for mere coincidence. I love the way the showrunners tied this in, and while it wasn’t exactly a huge surprise, it does have huge ramifications. Even though I haven’t enjoyed Cassandra or her friendship with one of my favorite Disney characters, her flashback sequence is a real tear-jerker. Cassandra is more compelling and sympathetic as a tragic villain than she ever was as one of our main heroes. Her reprise of “Waiting in the Wings” is incredible, and “Crossing the Line” is a compelling villain song. This turn makes so much sense because, personally, I’ve never found Cass to be likable, and she’s always had this chip on her shoulder. Making her an antagonist casts all of her past misdeeds in a new light, not to mention this very specific and gut-wrenching reasoning for her jealousy. 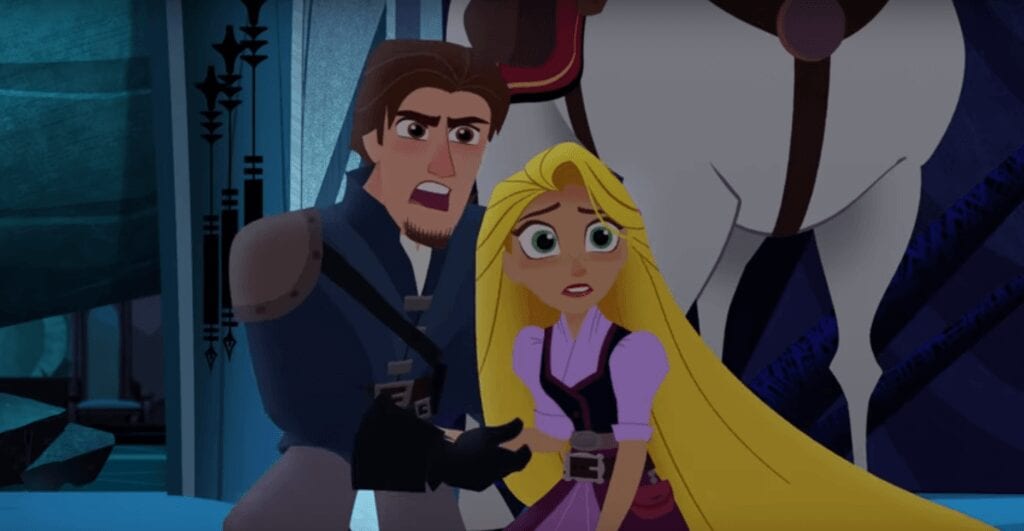 Of course, we all know Gothel was a terrible mother anyway, and it’s even displayed in Cass’ memory, in addition to the first movie. I’m wondering if Cass will eventually remember or realize that, and see that Rapunzel was the real victim. Whatever happens, I hope they don’t redeem Cassandra. She’s an insanely cool, threatening villain, and they’ve just brought Varian back to the light. That feels right because he’s just a kid, and what he really wanted was friendship and acceptance, compared to Cassandra’s lust for vengeance and power. That being said, I don’t want to undercut how well done her motivation was. I really want to go back and re-watch the series to trace her character arc. I also want to mention that it was badass when she bested Adira in combat. I literally gasped. In the flashback and her reprise, both baby and adult Cassandra ache for the love her mother can’t or won’t supply. And, just as we saw with Rapunzel in the film and in flashbacks, the love Gothel offers is in small, calculated amounts. She always leaves her victims wanting more. She’s a master manipulator, after all. I absolutely love that Donna Murphy came back to reprise her role. I almost wish they’d give her another song, but at the same time, this isn’t her story. 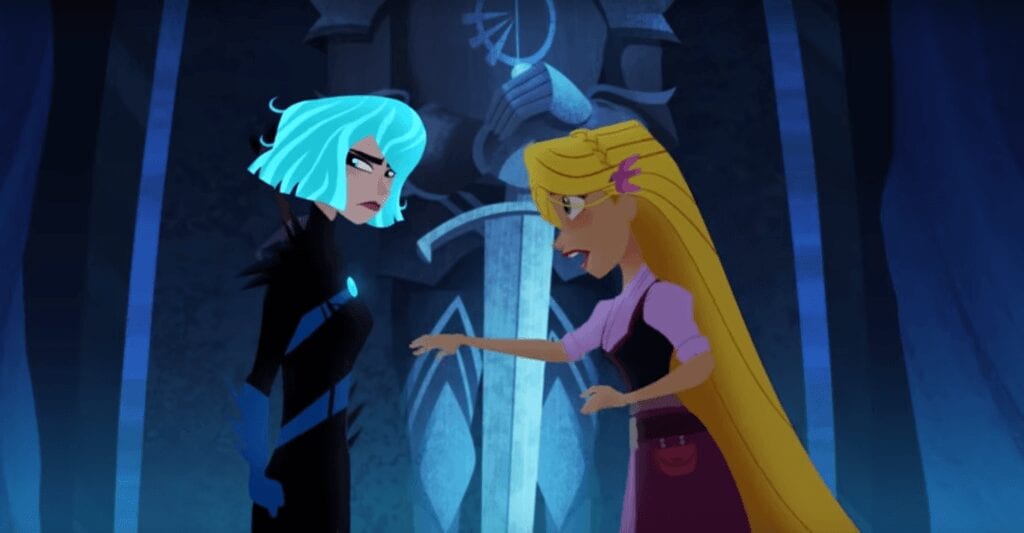 On that note, Rapunzel’s arc in “Rapunzel’s Return” is powerful and satisfying as well. Throughout the episode, Rapunzel looks shattered by what happened, but she’s not able to open up about it. Her best friend (aside from boyfriend Eugene and pet Pascal) stabbed her in the back, and to her, the reason makes no sense. She even tries to reason with Cassandra so she can understand, but of course, that doesn’t work. Being able to reconnect with Varian and bring him back into the crew is therapeutic for Rapunzel, so much so that it helps her to discuss what Cass did with Eugene, who has been trying to help her the whole time. Undoubtedly, this also brings memories and feelings of Gothel and the hell she was raised in back to the forefront for Rapunzel. I bet she’d like to tell Cass how lucky she was to be raised by the Captain of the Guard instead. “Rapunzel’s Return” has some surprisingly sophisticated character work, in my opinion reaching the heights of the original movie. It also has two incredible, emotionally-charged songs, thanks to my former least favorite character. I can’t even choose a favorite between the two; they’re very different but both great to listen to for both sound and lyrical content. 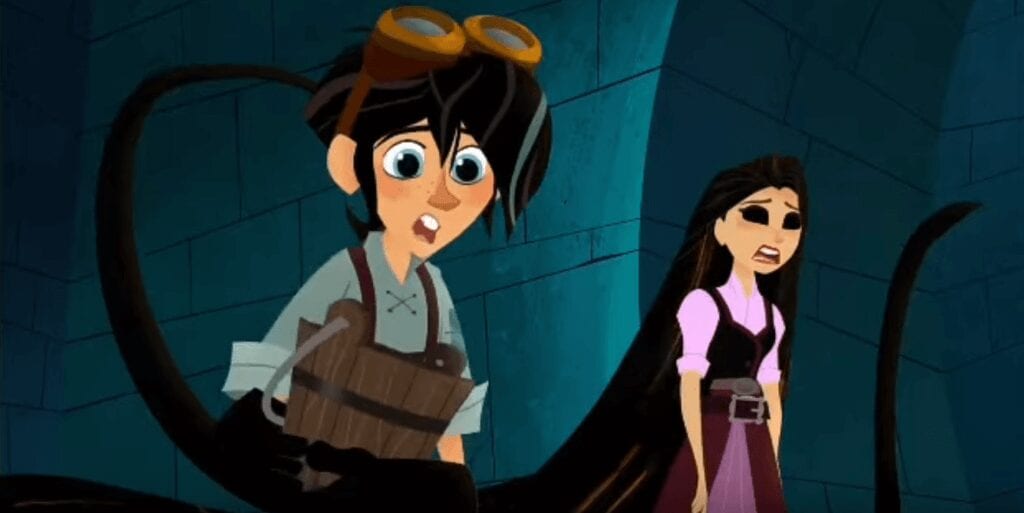 However, the episode isn’t quite perfect. The final song, “Better than Ever,” is very annoying. I can appreciate the attempt to end this epic, somber, heart-wrenching premiere on a positive note. I love upbeat, happy songs that give us several characters’ perspectives on an event or idea. One of my favorite songs, period, is “Next Stop Anywhere” from season two’s premiere, “Beyond the Corona Walls.” This song serves a similar function, to set up the season and build excitement and a sense of adventure. But it’s more dynamic than “Better than Ever,” and the vocals are absolute dynamite. Zachary Levi, Mandy Moore, and Eden Espinosa sounded incredible together. Honestly, I’m sad we probably won’t hear them sing together again. The animation in “Rapunzel’s Return” is stellar, especially in action sequences and anything involving Cassandra.

“Rapunzel’s Return” is a great season opener and a great episode of TV, period. They’re taking Rapunzel, Cassandra, and pretty much all the major characters in interesting and new directions. The animation, voice work, and most of the music are firing on all cylinders, and they’ve genuinely gotten me interested to see where the rest of the final season goes.