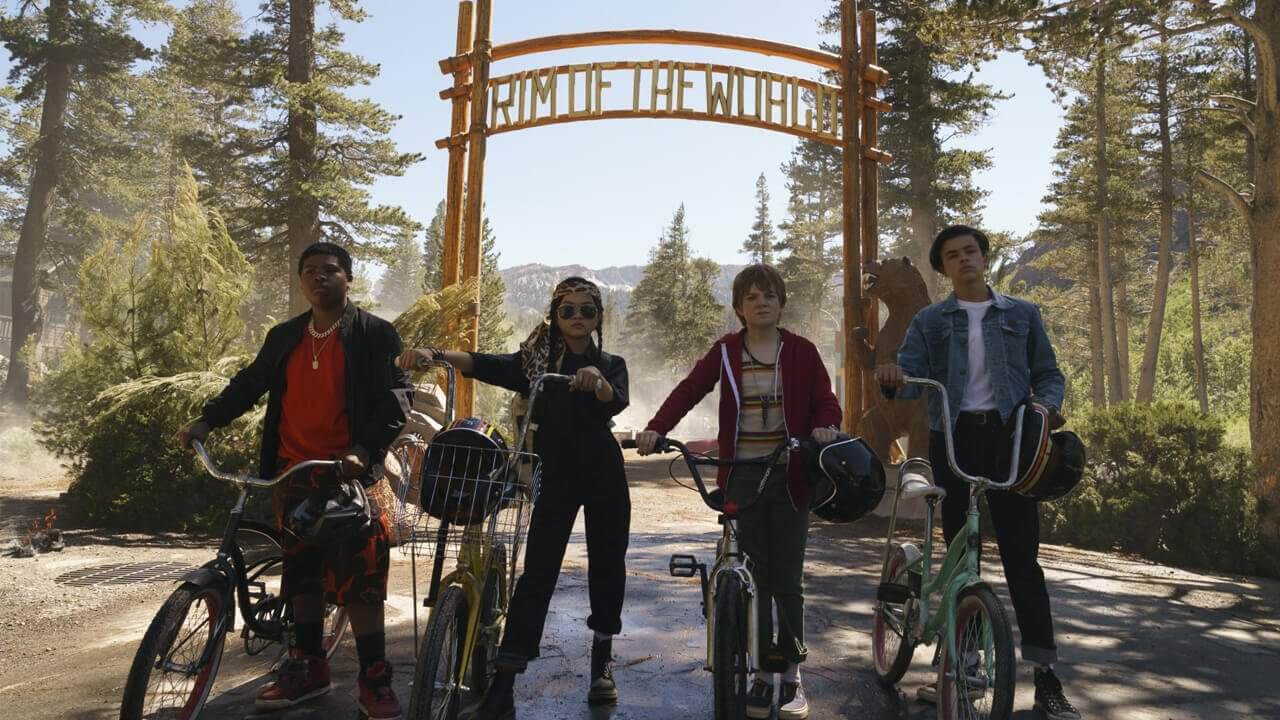 Ever since the 80s, the coming of age tale has been a popular storytelling device in fiction. Whether it was ET or Stand by Me or modern day hits like Super 8 and Stranger Things, these stories have often served as not only a gateway to understanding one’s self but also a gateway for the younger generation to discover science fiction for the first time. But in this age of spectacle, it can be hard to find this storytelling device in Hollywood’s output. Sure, in the last decade you had big films like Transformers being about a teenager and their first car, but all too often, the story is lost in studio mandates of big action and explosions. Still, there have been attempts in recent years to get back to the heart found in these stories and remind people of what science fiction can do at its best. The latest of these attempts is the new Netflix film Rim of the World.

The plot of Rim of the World centers on four kids who go away to summer camp, where an alien invasion suddenly knocks out all of their electronics, and they must figure out how to work together to save the world. The four leads really work in this film, and all have an organic reason for being at or near camp that ultimately informs their character in a big way, whether it’s to do with trauma (Alex, portrayed by Jack Gore) or just wanting to explore (ZhenZhen), for which the titular sleepaway summer camp is a great conduit. We can all relate to being away from home for the first time, something that we see most clearly through Alex’s eyes. While some may see it as a sense of independence, others may feel that it’s a bit overwhelming, something that’s hinted at when Alex is afraid of zip lining. But there is no better place to face up to your fears than sleepaway camp, and that is compounded by an alien invasion.

One of the best things about Rim of the World is the fact that the electronics are knocked out. All too often, parents have to tell their kids to put down the phone or the game controller, as children are more concerned with how many likes they get on Facebook than the outside world around them. By taking those things away, the characters must think on their feet and work together – something that would have been a given in past iterations of this story but takes on a new context in the modern era. As a result of this, things like fear and first love are brought back to the forefront and, by extension, allow our characters to refocus on the things that matter, all the while advancing their journey towards a MacGuffin. I like the fact that the kids come into possession of their goal organically; too often in movies like this, it falls to the kids in contrived ways. The film does a great job of not talking down to the audience and justifying the fact that these kids are the only hope for the world’s survival. While some may find this idea lazy, I’ve always believed it all depends on how you use it, and in this case, writer Zack Stentz uses it to full effect.

All that being said, there are some minor issues with Rim of the World, most notably the CGI of the aliens. I understand that this isn’t a 200-million-dollar film, but I couldn’t help but feel the creatures were created with the effects of a movie out of 2004. While this may have allowed the filmmakers to focus on the characters when the aliens first come on screen, I was taken out of the movie. I got used to it as the film went on, but that doesn’t mean it wasn’t an issue. As I said, Rim of the World could be a gateway science fiction movie for the next generation, so it’s really important that the aliens are up to par with their progenitors. I hope if there is a sequel, they will give the designs a bit more attention.

Despite this, the behind-the-camera talent deserves a lot of kudos, most notably screenwriter Zack Stentz. I’ve been following Mr. Stentz’s career since Terminator: The Sarah Connor Chronicles. While his work on the likes of X-Men: First Class and Thor was fantastic, it was his more recent contributions to The Flash that made me see all the talent that he has amassed through his writing experience, which has now culminated in Rim of the World. There is a polish to the story that can only happen when you have someone like Stentz behind it. Every moment is paid off, and there is a rich arc for our characters, something that is facilitated on-screen by director McG. Growing up, McG was one of the first directors I took note of, particularly in terms of how, for over a decade, he would come out with a new movie every three years like clockwork. Recently, he has become more involved in the development of TV projects (particularly on the Lethal Weapon pilot). I was worried the director wasn’t going to return to movies, so I was relieved when I found out he would be helming Rim of the World a decade after his last sci-fi opus, Terminator: Salvation. Composer Bear McCreary is also fantastic, reuniting with McG for the first time since Human Target, on which McG was an executive producer. McCreary’s work always has a classical nature to it, and given Rim of the World’s progenitors, this approach was the perfect choice for the score.

Rim of the World is a reminder of what science fiction can do when it focuses on characters and stories. Despite some problems with the creature design, writer Zack Stentz and director McG did a wonderful job with this old-fashioned sci-fi adventure. I can’t wait to see what else this team will bring us in future Rim of the World installments.

Rim of the World

Rim of the World is a reminder of what science fiction can do when it focuses on characters and stories. Despite some problems with the creature design, writer Zack Stentz and director McG did a wonderful job with this old-fashioned sci-fi adventure.