Science! The Elements of Dark Energy is an all-new graphic novel from Jason Inman and Ashley Victoria Robinson (Jawiin Youtube Channel, and writers of Jupiter Jet), following a diverse cast of kids, with our main heroine being Tamsin Kuhn Trakroo, a fourteen-year-old genius who goes to study at the highly esteemed Prometheus Institute. Think of this as Hogwarts for science, where she attends with her friends AJ and Sally, and her crush, Garyn. She’s not just there to apply her brainpower to the tasks at school, though; she’s there with a secret mission from her father to stop the evil Headmaster Laveran. But can she trust her father?

If you know me, you’ll know that I reviewed Inman and Robinson’s Jupiter Jet last year, and I was impressed, to say the least. I loved their sensibility for adventure and drawing an exciting cast of characters (I’m still waiting for that second entry, though!), and you know what? I’m still damned impressed with their output this time around. Science! is a smart and wildly entertaining graphic novel, built using real scientific research and filled with fun, colorful characters. 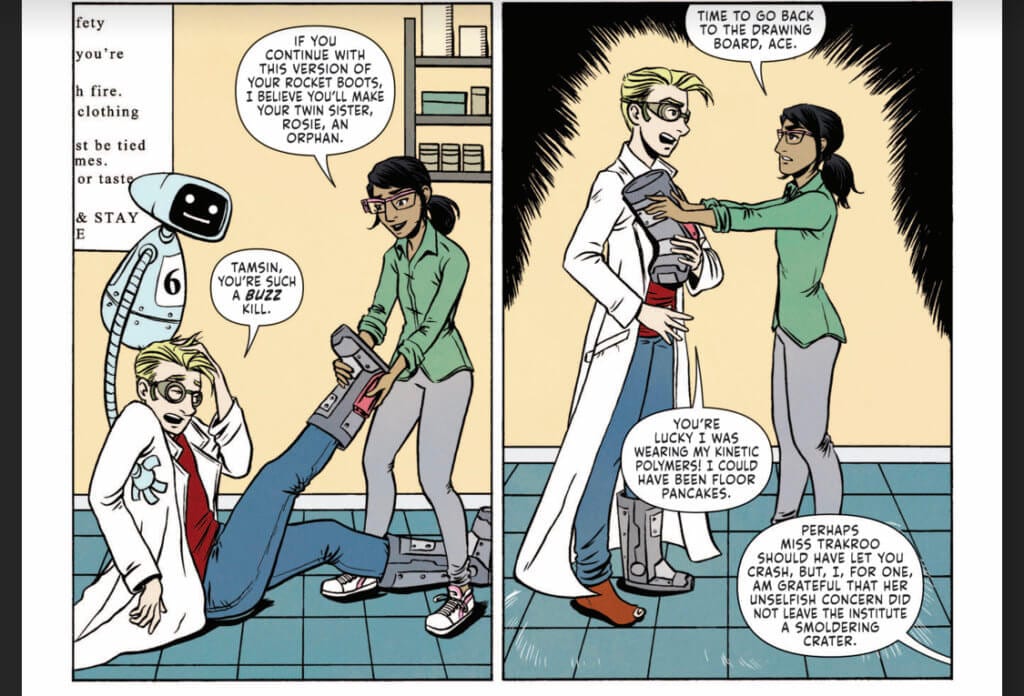 Science! doesn’t waste time getting us acquainted with the characters, opening with an amusing gag of explosive proportions, before introducing us to the antagonist and the conceit of Tamsin’s mission. The storytelling on display is both efficient and entertaining. The dialogue between the teens is natural and witty to a reasonable degree for people of their age. We’re introduced to the central romance of the story as well, between Tamsin and her roommate Garyn Merik, which is something that becomes even more important later on in the story. From the get-go, Inman and Robinson make us cozy, making the story feel pretty straightforward, but there’s a turning point where the story shifts in a different direction that I honestly can’t say I saw coming. There is a significant twist in the story that I DID kind of see coming, involving Laveran and Tamsin’s father, but even that wound up being subverted by the end.

One of the storytelling choices they made, which I appreciated, was having these helper robots (called S.T.A.Ts) stop to help explain some of the higher-concept ideas. This not only helped science-illiterate people like myself understand the concepts better but will also really help out younger readers who don’t know what dark energy or the real implementations of telepathy, etc. are. These interludes, called S.T.A.T Facts, also feature some witty jokes. I can see how some might find these odd for pacing, but they’re essential, and they’re infrequent enough that they worked for me. The S.T.A.Ts are very much some of the cooler inventions in the comic, serving for information purposes as well as humor. Still, they figure into the plot in a very fundamental way that I really appreciated. If I had any gripes with the plot, it would be that I’d like to know more about these characters than just their little blurbs when they’re introduced.

There are several characters introduced in the beginning pages, and I feel that by the end of the story, we only truly get to know maybe two or three to any substantive degree. Are there too many introduced at once? Perhaps we could have held off on a couple ’til a second novel, but maybe they wanted all cards on the table in case this wound up being the only book. However, an asterisk should be placed on this critique, as this is clearly the beginning of a potentially larger story. These are things that could totally be fixed in the future when there are more stories set in the universe. The only relationship I feel wasn’t explored that could have genuinely enhanced this plot is between Tamsin and her father. We only see her father in flashback or as this uploaded consciousness in her glasses (which is really cool, by the way), but we don’t have much of an inkling of their relationship when he was alive. This could have made certain choices that Tamsin makes late in the game be a bit more emotionally impactful. I wish it were a bit longer, to be completely honest, and I wanted more time within the Prometheus Institute with Tamsin, Sally, Garyn, and AJ. Hopefully, we get more soon.

I dug Dez Pittman’s art. It’s quirky, stylized, and with the coloring by Becka Kinzie, it really pops and lends to the adventure qualities of the book. Even in some of the darker panels, where we see some pretty rough stuff, I’m having fun looking at the art. The characters are expressive; this aided the character interactions a lot, particularly the romance of Garyn and Tamsin. I’ll say that there are a couple of imperfect panels, one in particular after an explosion where a character almost looks like she’s flattened. But there were very few instances I can point to where I can say, “That didn’t look right.” Altogether, the bold art style truly complimented the story and brought uniformity to the tone of Science!

I think there’s an interesting lesson to be learned here. It’s something that a lot of sci-fi hits upon, but it’s still crucial. Knowledge and science, in general, is a powerful thing, and it should not be taken lightly. It shouldn’t be used just to get ahead, and you should know what you’re messing with before you start. The characters in Science! learn that lesson, and some of them learn it the hard way.

Overall, I think Science! is further proof that Jason Inman and Ashley V. Robinson are up and coming comic creators to watch. They have a firm grasp on writing fun and interesting worlds to engross yourself in, and while I thing Science! is a (slight) step down from Jupiter Jet, I also think that this world has immense potential to grow into something beautiful. Science! is a book I can wholeheartedly recommend to anyone of any age group.

What did you think of Science!? Let me know in the comments below! Stay nerdy, everyone!

Science! The Elements of Dark Energy

Science! The Elements of Dark Energy is a smart, fun, and colorful introduction to the Promethean Institute and heroine Tamsin. The relationships could be stronger, and some of the art needs work, but this is a fun sci-fi romp for all ages.