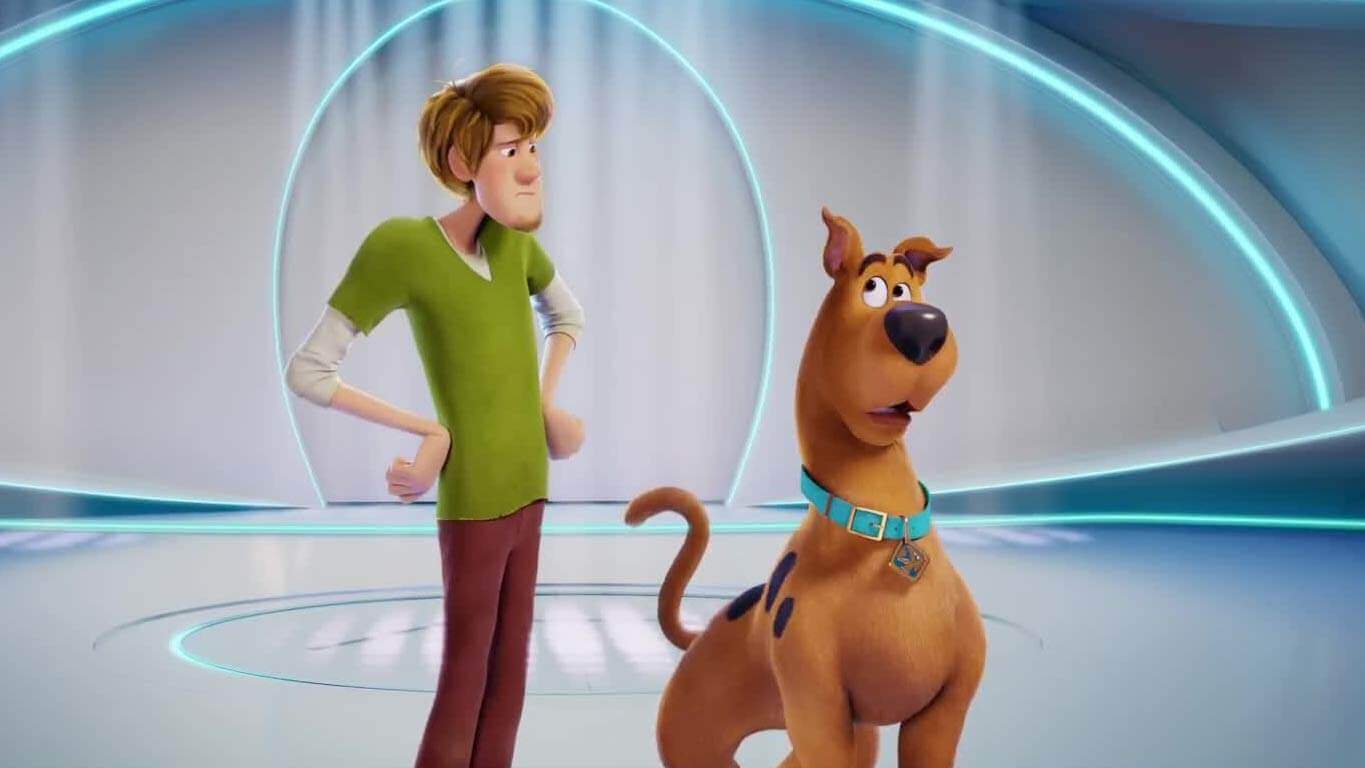 The time has finally come. While I had hoped to see my beloved Great Dane’s next adventure on the big screen, I will be forever grateful to director Tony Cervone and Warner Bros. for making Scoob! available at home amid the pandemic. So without further ado, let’s see what this opening salvo in the Hanna-Barbera cinematic universe has in store for Mystery Inc.

Scoob! opens on  Venice Beach ten years ago, as we see our currently nameless titular character (his design here reminiscent of A Pup Named Scooby-Doo) stealing some food. A chase with a police officer ensues, and a lonely Shaggy is nearly knocked over. As Scooby hides from the cop, he hears Shaggy talking to a pile of sand about how this totally counts as a play date. A sympathetic Scooby crawls out from his hiding place, and they share their first meal together. The cop approaches them and tries to take Scooby away, but Shaggy tells him he’s not a stray, and his name is Scooby Doobie Doo. Shaggy takes Scooby home and, after introducing him to his fascination with the Blue Falcon, offers him his signature collar, which Scooby happily accepts.

Following an encounter with some bullies on Halloween and meeting the rest of the gang for the first time, we get a montage of mysteries mimicking shots of the opening titles of the show as a new rendition of the theme song plays. We then rejoin Mystery Inc. in the present day as they try to expand their brand. Unfortunately, their prospective investor, Simon Cowell, doesn’t see the value in Scooby and Shaggy and refuses to back the team if they are involved. This outrages the duo, and they leave to go bowling, where they encounter a bunch of robots. After some typical Shaggy and Scooby hijinks, they are beamed aboard the Falcon Fury. They meet Dee Dee Sykes, Dyno Mutt, and Bryan, the new Blue Falcon. The superhero team explains to them how Dick Dastardly, head of Dastardly Demolition, is after three dog skulls from around the world. Meanwhile, the rest of the gang begins to put the pieces together as they try to find out where their friends are.

For a 50-year-old franchise, it can be difficult to come up with a fresh perspective. For the most part, I’m pleased to say that Scoob! achieves this. In films like Scooby-Doo and The Reluctant Werewolf or shows like 1980’s Scooby-Doo and Scrappy-Doo, Fred, Daphne, and Velma weren’t there, so Shaggy and Scooby were basically the leads by default, unable to share the load with the rest of the team. In a sense, Scoob! is the first time Shaggy and Scooby had to earn their place on the team and prove they’re more than just Scooby snack aficionados. In addition, I loved how they maintain the zany tone of not only the original series but also the more recent direct-to-DVD films. Finally, there are some great Easter eggs for longtime fans, from Hong Kong Phooey to a nice homage to original Scooby-Doo voice actor Don Messick.

All this being said, Scoob! is not without its issues, most notably the other three members of Mystery Inc. often not being given enough to do. This occurs to the point that I don’t understand why they couldn’t have had Frank Welker to reprise his role as Fred. This brings me to the voice work, which is pretty exemplary across the board. With Mark Wahlberg’s Blue Falcon and Ken Jeong’s Dyno-Mutt (both of whom I could easily see carrying a spinoff down the road), as well as Welker’s perennially excellent Scooby-Doo and, to my surprise, Will Arnett as Shaggy, of particular note. It’s no secret that I’ve been critical of this bit of casting, given that Matthew Lillard was – just as our favorite theme song says of Scooby – ready and willing. However, I‘m pleased to announce that I was wrong, and Arnett gives Shaggy an emotional core I hadn’t expected. I was even surprised by Ian Armitage’s portrayal of Young Shaggy, perfectly encapsulating his socially awkward phase, thus making him incredibly relatable to kids and adults alike.

All of this is thanks to a fantastic story. While too many writers on a project can often spell disaster, from my perspective, that wasn’t the case with Scoob! Writers Adam Sztykiel, Jack Donaldson, Derek Elliot, and Matt Lieberman – the latter of whom co-wrote the story with Eyal Podell and Jonathan E. Stewart – crafted a narrative that, for the most part, works very well. Yes, they were a couple of things that were a bit too on the nose, as well the aforementioned underuse of Fred, Daphne, and Velma. But overall, I was impressed with how well-constructed the story is, as director Tony Cervone excels in his first solo directing gig. Everything that’s set up is paid off expertly. While people who haven’t seen Scooby-Doo! Mask of the Blue Falcon may scoff at the idea of adding superheroes to the film, I thought it was handled well and didn’t take anything away from our main heroes. Yes, this is the beginning of a shared universe, but Scoob! is, thankfully, still all about Scooby-Doo.

I need to give a special shout-out to the sound designers. One of the things I’ve always loved about Scooby-Doo is that, growing up, I would hear the sound of the gang running from the monsters and instantly know that Scooby-Doo was on without even being in the same room as the TV. Usually, it would just blend in for me, but in Scoob!, I suppose, because of it serving as a franchise reboot, it stood out. I’m delighted that they’ve been able to carry that forward in this new iteration.

With a great script, and some fantastic vocal performances, great sound, and some nice moments of fan service, Scoob! is a worthy entry in the Scooby-Doo canon. While I hope the other members of Mystery Inc. get their due in a sequel, this is a wonderful start to the Hanna-Barbera cinematic universe.

With a great script, and some fantastic vocal performances, great sound, and some nice moments of fan service, Scoob! is a worthy entry in the Scooby-Doo canon. While I hope the other members of Mystery Inc. get their due in a sequel, this is a wonderful start to the Hanna-Barbera cinematic universe.

I liked Scoob. I agree that the rest of the gang should’ve had more screen time and development. I also hope that Daphne becomes more of the independent fighter that I enjoyed in the character from the past decade. Most of the cast was pretty good. Mark Wahlberg seemed to be just him when he was Blue Falcon but I thought Jason Isaacs must’ve had a blast voicing Dick Dastardly. Loved everything about that character in the movie.

I might rent this soon, then. I thought it looked cool when I saw the trailer, and was looking forward to seeing reviews of it.

I found the movie enjoyable, but it was indeed very different from what we are used to in Scooby Doo. Shaggy and Scooby joining a team of superheroes is somewhat of a bizarre concept (at least in my opinion).

I thought it was a really enjoyable film and very funny. I’ve already seen it twice.

Wow I didn’t expect much but I trust your review so I’m going to check it out.