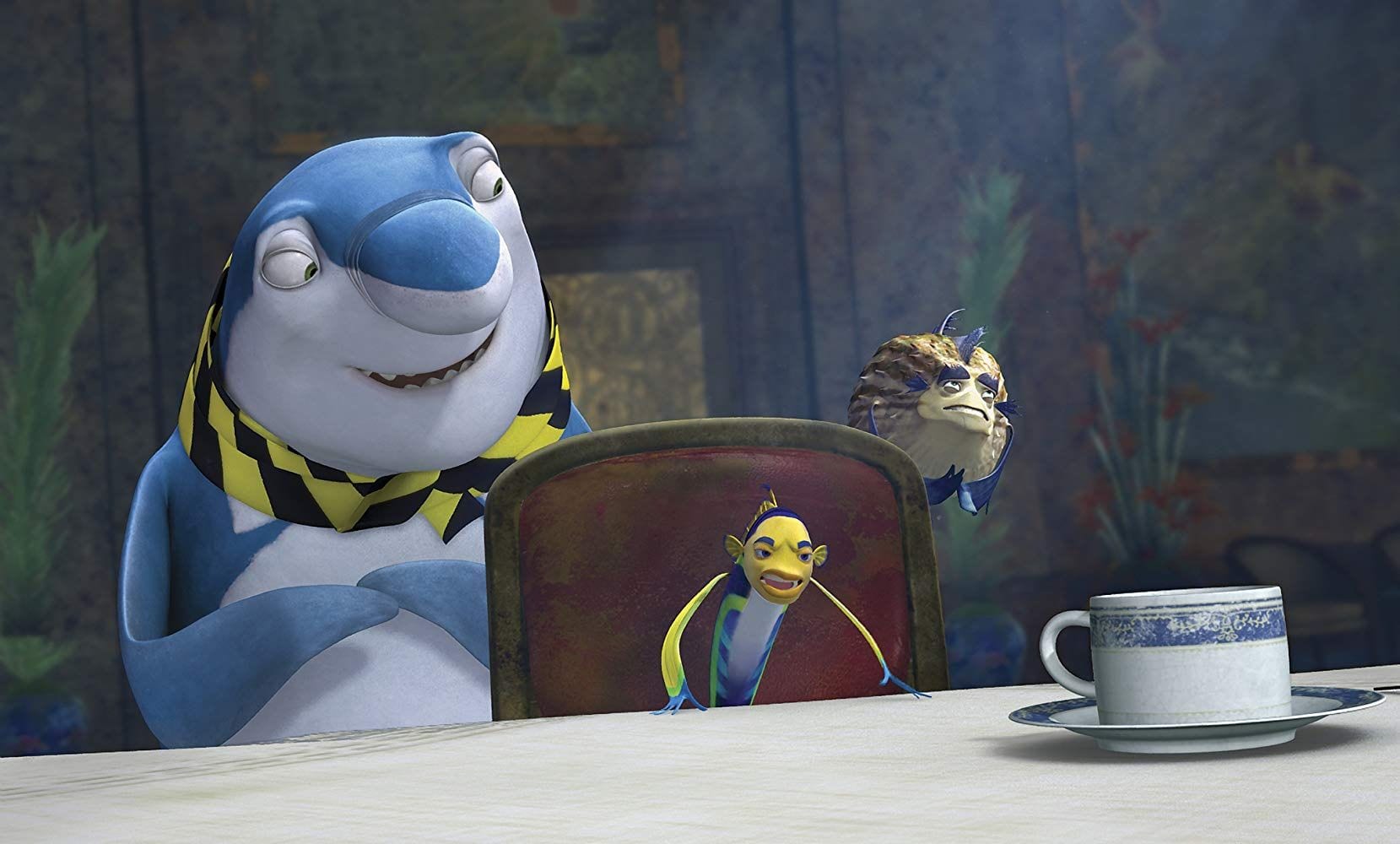 DreamWorks Animation released two movies in 2004, and they couldn’t have been more different. Shrek 2 and Shark Tale are both animated comedies with all-star casts packed with pop culture references and adult humor. However, that’s where the similarities end. The films’ characters and execution of their concepts make it hard to believe the same studio made them at the same time. When I was a kid, we actually received VHS copies of Shrek 2 and Shark Tale, among other movies, so I saw them around the same time. While Shrek 2 became one of the most-watched movies in our family collection, we watched Shark Tale once, and everyone agreed it wasn’t any good. Having not actually seen Shark Tale in about fifteen years, I went in wondering if I might feel any differently now. When I was young, I hated DreamWorks because they attempted to rip off other animated movies. With few exceptions, I was convinced that they were a heartless studio with no creativity or passion. Of course, this all sounds a little silly now. I also don’t think Pixar is the infallible, most perfect studio on earth anymore. Let’s take a look back at one of DreamWorks’ most reviled animated movies.

Shark Tale follows a fish named Oscar (Will Smith), who works at a whale wash. He considers himself a failure because he doesn’t live at the top of the reef with all the wealthy celebrities. His co-worker and best friend, Angie (Renée Zellweger), has a crush on Oscar, but he’s too self-absorbed and worried about fame and fortune to notice. Oscar owes his boss, Sykes (Martin Scorcese), $5,000. Sykes decides to call him on it when Don Lino (Robert DeNiro), the head of the sharks, starts demanding protection money. Angie gives Oscar a precious pink pearl from her grandmother so he can pay Sykes off, but he foolishly bets it on a racehorse that ultimately loses. Sykes’ men tie Oscar up, torture him, and leave him for dead. Here, Oscar meets Lenny (Jack Black), a vegetarian shark and son of Don Lino. The Don sent his other son, Frankie, out to teach Lenny to be a real shark, but it doesn’t go to plan; Lenny refuses to eat Oscar, and Frankie is killed by an anchor. When Sykes’ henchmen come back, they see Oscar alone next to a dead shark, which earns him the title of “Oscar the Shark Slayer.” The money and fame attract Lola (Angelina Jolie), who previously rejected Oscar when she realized he was betting with someone else’s money. Conflict arises quickly as Angie is jealous and feels undervalued, and the sharks believe Oscar killed both of Don Lino’s sons. Oscar has to ask himself what’s really important. 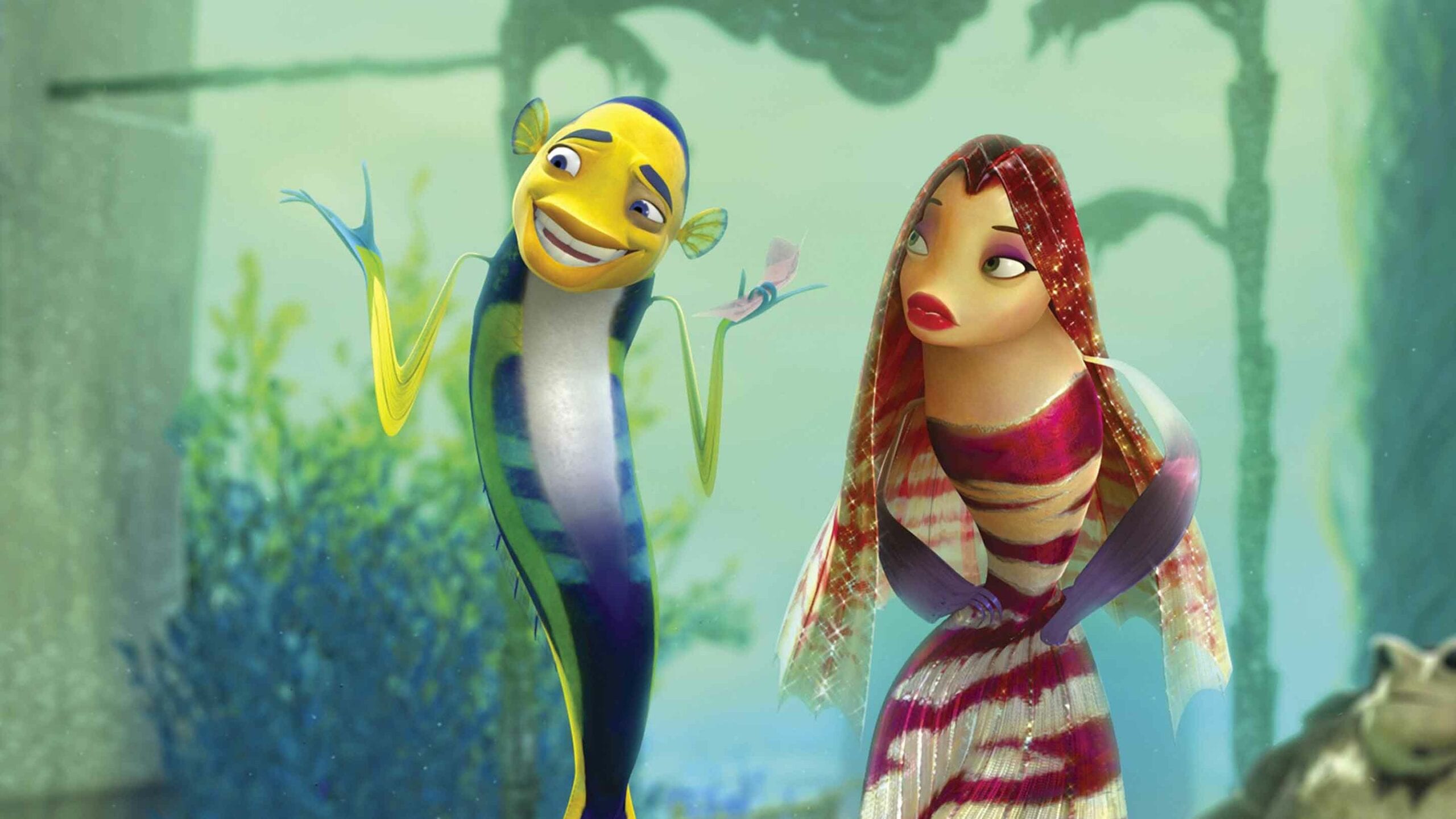 This movie is terrible. And I don’t mean disappointing or not for me; I mean spectacularly, offensively bad. People probably watch Shark Tale ironically like The Room or Plan 9 From Outer Space. However, I would take either of those over Shark Tale because they were made with love and seemingly came from a place of naïveté. Shark Tale is cynical to its core, and everything from its characters to its use of music feels disingenuous. It’s hard to even know where to start with a movie that’s so thoroughly, unapologetically mean-spirited and poorly made. I will give some credit to the cast, as it sounds like they’re all genuinely trying. And some lines are quite funny, although unintentionally so. Scenes that are supposed to be taken seriously, like Don Lino finding out that his son Lenny is alive, end up hilarious because of the line deliveries and timing. Meanwhile, actual jokes like the celebrity name puns fall flat, and the character-centric jokes are usually cringe-worthy. I love Jack Black, and he would get a much better opportunity with DreamWorks’ Kung Fu Panda series, but Lenny is a bad character. The parallel they try to draw between being vegetarian and being gay is questionable at best. And the lispy, high-pitched voice he does is both insulting and annoying. However, Renée Zellweger, Angelina Jolie, Martin Scorcese, and Robert DeNiro are unironically pretty good. The latter two provide a lot of the unintentional laughs I mentioned earlier. Their characters are despicable and unlikable. However, the actors’ line reads provide the meager enjoyment Shark Tale has to offer. I also think this is actually a good concept for a film. A mob of literal sharks who sink into chaos and fear when a fish kills one of their kind sounds exciting and potentially funny. Oscar’s “character arc,” obvious and trite as it is, could have worked in a better movie. 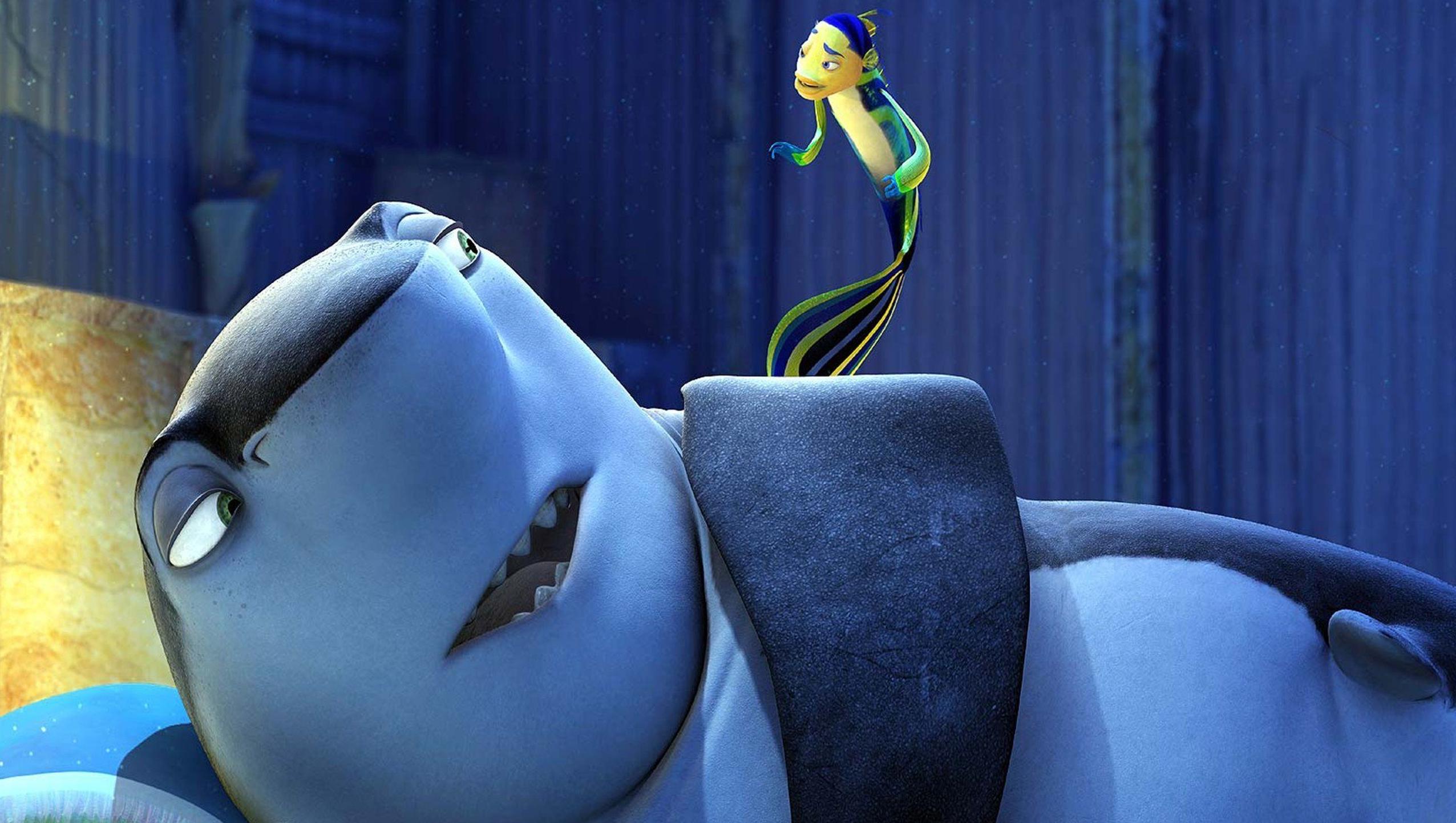 However, Oscar and his friends (and enemies) are just too unlikable for Shark Tale to work. Oscar is selfish, which isn’t a bad way to start his journey, but he doesn’t really learn anything until the very end. There is no gradual realization or change; it’s too late in the film, and it feels insincere both on his part and the film’s. His obsession with wealth and fame is too over-the-top to be believed, and he’s totally inconsiderate of Angie’s feelings for most of the movie. It’s really unbelievable just how dumb this guy is. After everything Angie does for him, he doesn’t get the hint until she literally tells him she loves him. And for her part, Angie never communicates honestly until Oscar is going out with Lola. I’m not even sure why Angie cares about Oscar at all; he’s selfish, greedy, and never shows any concern for her well-being. They both come off as really dumb and unlikable. It’s also hard to accept that Lino, Sykes, and Oscar can all forgive one another so quickly when they’ve done and said so much wrong throughout the film. Sure, Oscar didn’t really kill Frankie or Lenny, but he did terrorize the shark community and lie for a considerable amount of time. And how can Sykes and Oscar be “cool” with someone who literally wants to eat them and everyone like them? For his part, Sykes threatened Lino and tried to have Oscar killed. None of this feels earned in the end, and the movie has the gall to end with a dance party. The early 2000s were littered with dance party endings to animated films, and this trend briefly came back in the 2010s. This is the laziest, least satisfying way to give a movie a happy ending. You don’t have to resolve the underlying conflict that caused the movie’s problems, and these scummy people don’t have to truly make amends. 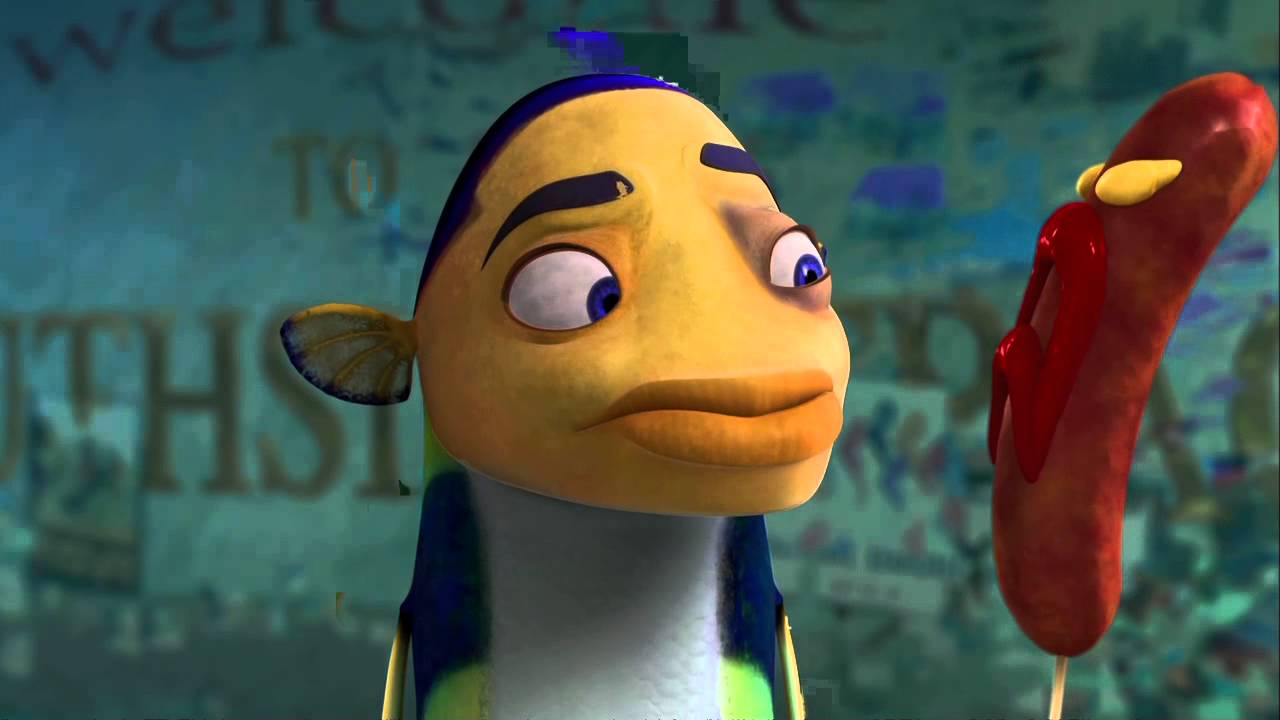 This is also a movie that feels exceptionally dated. And I don’t mean the animation; it’s creepy and horrifying, but that’s on the designs, not the CG quality. Shrek 2, The Incredibles, and Howl’s Moving Castle all came out in 2004, and none feel dated like Shark Tale does. Personally, I find it easy to ignore or even embrace outmoded visual effects as long as the story is good. But this entire film hinges on pop culture references. Shrek 2 got by with this because it had a strong story and characters, and you know what? The jokes were good, and many still apply. And listing celebrities while replacing their names with fish puns isn’t funny or witty; that hardly even counts as a joke. Meanwhile, the soundtrack is pretty bad, too. Hans Zimmer and Jared Lee Gosselin’s original score is fine, but honestly, it’s pretty bland and unnoticeable. But the pop songs here are just bad fits. They always go with the most obvious choice, like “Gold Digger” for Lola and “Car Wash” because Oscar works at a whale wash. This actually makes me think a little of Suicide Squad, where every character and set needs its own song, and none of them are even creative uses of the music.

Overall, Shark Tale is just about as bad as it gets. I consider this to be one of DreamWorks’ weakest animated films, if not the worst overall. I’m genuinely curious to see if the mean-spirited tone, unlikable characters, and garish technical aspects can be beaten.

Thanks for reading! You missed nothing haha.

Saw it once and spent years inside a bottle trying to forget it. Now I have a nice ship. But I can’t go anywhere stuck in this bottle. LET ME OUT!!! Or at least bring me a bacon sandwich.