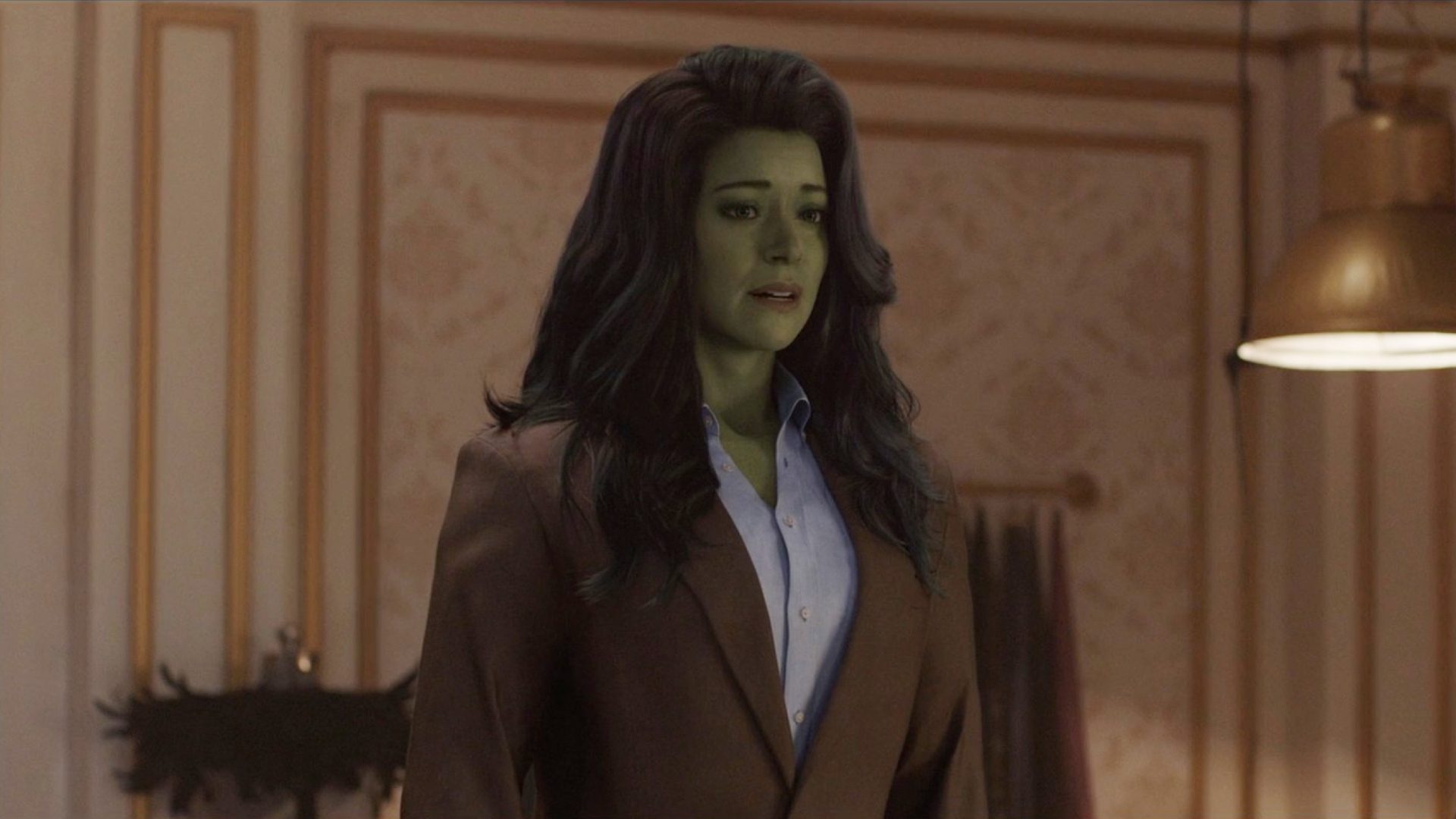 “Mean, Green, and Poured Straight into These Jeans” may be the worst episode of She-Hulk (so far; we’ve got four more of these suckers to go). The woke feminist stuff is present, though not as abrasively as in, say, the pilot, and it’s got plenty of bad plotting and character work to complement it. This dumb, grating, embarrassingly unfunny episode encapsulates what this show is and what it isn’t: it’s lame, bad-comedy fluff, and it isn’t a fun, cool superhero show.

Jen takes on Titania for the rights to the name “She-Hulk.” Nikki seeks out some She-Hulk-appropriate clothing for Jen so she doesn’t look like a child wearing her father’s suit in case she Hulks out during working hours. The guy who played one of Arrow’s best villains is turned into a blithering idiot who talks like he has a speech impediment because men are so dumb, right, ladies?

“Mean, Green, and Poured Straight into These Jeans” (a title someone got paid to come up with, in case you thought the universe was fair) is concerned solely with the ending of last week’s episode, at least as far as Jen is concerned. Titania is selling a line of beauty products called “She-Hulk,” and when Jen’s brother tries to market a bunch of t-shirts with the name on them, she tells him about the copyright lawsuit. He then slowly explains copyright law to Jen, which makes her scream into a pillow. Get it? A supervillain (I guess) is stealing her name, but the real problem is mansplaining! That and a girl-talk moment between She-Hulk and Nikki about women not feeling safe while listening to headphones are the more obvious instances of women-got-it-worse lamentations. (Granted, I haven’t been privy to much girl talk, but do women really just joke around about that to each other?) But even beyond the moaning about men, it doesn’t get much better.

Jen’s got a bigger problem than just the embarrassment of seeing her superhero name in bad commercials for lousy products (the single line that made me chuckle this week: “She’s literally selling snake oil!”): her boss doesn’t like the publicity of some Kardashian wannabe successfully suing one of the firm’s most prominent attorneys. So he assigns one of their crackerjack lawyers to the case. Is it the already-established character Pug, played by good actor Josh Segarra? Of course not; they’re busy mocking him for being a man and existing. No, they bring in Mallory Book, a no-nonsense fashionista played by Renée Elise Goldsberry. Goldsberry makes out better than anyone else in “Mean, Green, and Poured Straight into These Jeans” because she’s allowed to just deliver some lines without making any awful jokes. And she comes off as a decent lawyer, too; the courtroom scenes aren’t at the level of a David E. Kelly show or even as good as that episode of Happy Days where Fonzie and Mr. Cunningham served on the same jury, but they aren’t as bad as the previous attempts.

Unfortunately, the trial is a snooze because it’s over a nonsense case where someone is trying to copyright Jen’s alter ego. Is there a doubt in anyone’s mind that Jen will win the rights to “She-Hulk”? What stings a bit is that the show could have done something with the concept. Where does a person’s right to their own identity begin and end? Is Jen wrestling with the idea of fighting for the name she once decried? Does Jen have a responsibility now that she’s fought for and won the name of a superhero? Who has the rights to other superhero names? Does her being related to The Incredible Hulk make any difference? I probably don’t need to say that She-Hulk isn’t interested in any of these questions; Hulk being her cousin is brought up and immediately ignored, and one of Titania’s lawyer’s arguments is that Jen said she didn’t want to be called “She-Hulk,” but instead of leading to some introspection or character development for Jen, it’s just a plot point. Even the solution to the trial, where Jen’s string of dates testify that she presented herself as She-Hulk, could have been used to make her struggle with her dueling identities, but they brush it off by calling them all losers again, with Book telling Jen she can do better. (She’s totally welcome for them saving her ass in the case, though.)

While Jen is having something resembling a story, the subplot involves Nikki and Pug trying to get her some clothes that are fashionable yet built for a superhero. Nikki is tasked with getting Jen a better suit, and Pug, after asking Nikki to help him get a second pair of Iron Man sneakers (because he’s dumb or something), gets roped into taking her to a source of superhero clothing he knows. This is a convoluted sequence that thinks it’s a lot funnier than it is, but it soon lands these two time-wasters at the door of a tights tailor named Luke Jacobson. He’s like Edna in The Incredibles, except he’s a gay stereotype who’s so flamboyant Harvey Fierstein would tell him to tone it down. He’s also not funny, as if that needs to be confirmed about a character in She-Hulk. But he’s the guy who makes super suits – or some of them, I guess. I’m not against this in theory; it fits with Jen’s job as a high-priced lawyer that her firm would get her some exclusive clothing. But the way they find Jacobson is silly and takes too long; it would be more believable for the senior partners just to have him on speed dial. But Jen’s got a suit now, so she’ll only look ridiculous because of the CGI. This also sets up a much-ballyhooed upcoming guest appearance, and the way he now has his costumes made vs. how it happened on his show is probably suggestive of the tonal shift his adventures will experience now that they’re on Disney+. Get ready for a legion of those Don Corleone “Look how they massacred my boy” memes.

Does any of this sound like something you’d want from a superhero show? You can have some of these elements; Daredevil had legal drama, and virtually every superhero story deals with themes of identity and personal lives conflicting with saving the world. But they were balanced with action, villains, and the cool stuff that defines the genre. Look at Titania, for example. In the comics, she was introduced in “Secret Wars,” where she fought She-Hulk and a bunch of other Marvel heroes on another world. Here, she’s a social media influencer and owner of branded products whose evil scheme is to use “She-Hulk” to sell perfume. Who cares? And what’s worse is, the show wants to have it both ways; it tries to look thoughtful on occasion, but when someone points out that it never explores these subjects or says a single meaningful thing about them, they and their defenders say, “It’s just a comedy.” Then don’t raise any lofty ideas. (Being funny wouldn’t hurt either.) She-Hulk is an unfunny, thoughtless, poorly-plotted bore, and “Mean, Green, and Poured Straight into These Jeans” is, in that respect, its perfect episode.

She-Hulk: Attorney at Law – "Mean, Green, and Poured Straight into These Jeans"

“Mean, Green, and Poured Straight into These Jeans” picks up the Titania storyline and makes it even duller, with a court case it’s hard to care about and a boring subplot accentuated by laughless humor.

It’s too bad because I like the look of the guy lawyer and totally forgot he was in Arrow. Worst thing about it is that I know guys who talk like that now. It’s a sign of a sub-culture.

Everything we need to know about their intentions with that character is in the name “Pug;” like they’re calling him a good little doggie.