The Japanese role-playing game genre has been a niche one on Western shores since the earlier days of its prevalence when publisher Square-Enix (formerly known as Squaresoft) began localization of its Final Fantasy franchise in 1990. Since those days, the JRPG genre has boomed into a multifaceted one, ranging from intense, action-oriented combat to turn-based battle systems that harken back to those days of yore. Your average gamer knows of Final Fantasy, regardless of whether or not they’ve ever played one of the titles, but equally so, the average gamer doesn’t know of many (if any at all) other games that populate the pool. One such franchise is the Sega-published Shining series.

Full disclosure: I’ve never played a Shining entry prior to Shining Resonance: Refrain, but after downloading the demo and playing as much of it as is possible within its constraints, I wished sorely that I had, because it has elements that feel like some of my most-loved things about the Tales of franchise, which is one of my favorite game series.

Shining Resonance: Refrain is the re-release of Shining Resonance, which was originally only available on the PlayStation 3 and exclusive to Japan. This current generation remaster removes both the region and console exclusivity, as it is now available on the Xbox One, PlayStation 4, Nintendo Switch, and PC. The story centers on an imprisoned boy named Yuma who is rescued by knights of the Kingdom of Astoria and brought to their nation’s capital. What makes this boy so special that Astoria would risk the lives of their own to emancipate him? Well, to put it bluntly, he is the physical vessel for the Shining Dragon, the most powerful of the ancient world dragons, and its spirit resides within him. Astoria prays that Yuma will use the Shining Dragon’s great power to aid them in their struggle against the Empire of Lombardia. This story may appear like standard fare if you’ve played any number of fantasy JRPGs before, and that’s because it is. The narrative doesn’t truly bring anything new to the genre, but what it does it does well, and I haven’t found myself rolling my eyes at the tale being told – more often than not just enjoying its relative simplicity. 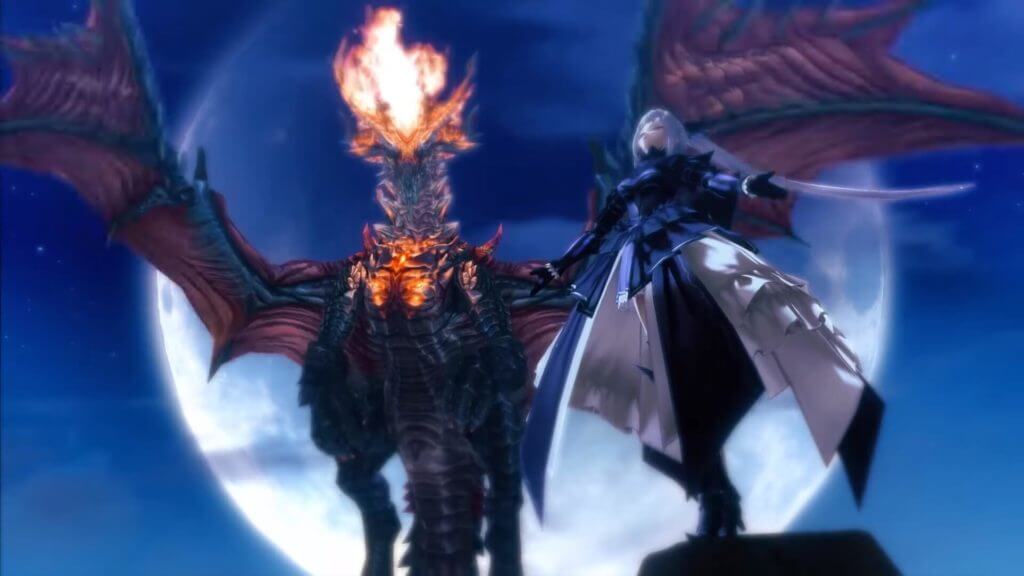 The “Refrain” (aside from being an example of Japanese developers having a penchant for strange, and sometimes downright wordy, subtitles) part of the title refers to a new mode of playing through the game’s story, although “new” might be a stretch. In essence, playing through this new Refrain mode adds two previously unplayable characters into your party, making them available for the game’s noted bonding moments, just as with all of your other party members would be. While a great way to add a few more Trophies/Achievements to your Gamercard, it doesn’t have any real effects beyond that. In fact, if anything, it may cause some confusion, as there will potentially be several points throughout the story in which you are battling a certain character while also having said character in your party. For me, this wasn’t particularly distracting; I’ve played more than enough JRPGs to be familiar with the antics that New Game+ modes frequently inject into the game. That said, if you feel that this would potentially remove some of the narrative immersion for you, then I’d advise you play through the game’s story in its vanilla iteration.

Something that generally makes or breaks a JRPG for me is the combat, as I like to level-grind like a madman. Shining Resonance: Refrain’s combat system is fast, crisp, and, apart from a swift camera angle change, the game has virtually no transition from field screen to battle screen (something that, after grinding for any length of time in a given game that does have one, can get really old really quickly). The combat is all real-time, so no waiting for your turn to hit something while you get hit by your opponents like in the Pokémon or older Final Fantasy entries. See that thing? Want to go kill that thing? Cool; go kill that thing, turns be damned – what is this preschool?

On the surface, the combat is incredibly simple, with you having one button input for your light attack and another for heavier ones called Break Attacks, both of which consume your Action Point (or AP) gauge. Beyond that, you have a customizable set of 4 Special Force Attacks that consume MP. These Force Attacks can range from summoning a bolt of lightning to healing a party member or giving a party member a boost to their offensive or defensive parameters, remove debuffs and status ailments, etc. Once you’ve progressed a bit further into the game’s first real act, a new facet to the battle system called B.A.N.D. Sessions opens up to you, in which, after filling up the Band Performance Mana meter, your entire party will gather to play a tune that adds significant buffs to the whole team. These buffs vary based on who the session leader is and who the other party members are.

Why all of the references to music, you may ask? Simply put, your party members fight with weapons that double as musical instruments call Armonics. One such Armonic is a sword and buckler shield combo that doubles as a violin; another is a flaming staff that is also a rock guitar. These weapons have a variety of traits that can be upgraded or customized through the Tuning and Aspects Systems to achieve various results. It sounds simple on the surface, but there’s a surprising level of depth to them once you start to do your own fiddling (sorry, it’s a habit).

Furthermore, your non-controlled party members can also apply additional effects to you based on their bond with you, and these change depending on how you choose to set up your Bond Diagram. Each character has a predisposition of one form or another towards another given character in the party. These attitudes can change based on whatever trait you assign to those characters, and altering the trait of one to improve your relationship with another may negatively affect the relationship with yet another still. Even with these deep systems built in, the game is pleasingly easy to play and enjoy without feeling overwhelmed by them.

If you’ve played other cell-shaded JRPGs in the past, then you should find yourself at home with Shining Resonance: Refrain. I found the visuals aesthetically pleasing, and the character designs are particularly gorgeous. Despite originally being a PlayStation 3 release, it’s clear the effort that was put forth to raise the visuals as a whole to current generation standards. The background environments could stand to have a little more detail, but truthfully I spent too much time staring at the characters themselves and their battle effects to notice with much regularity. 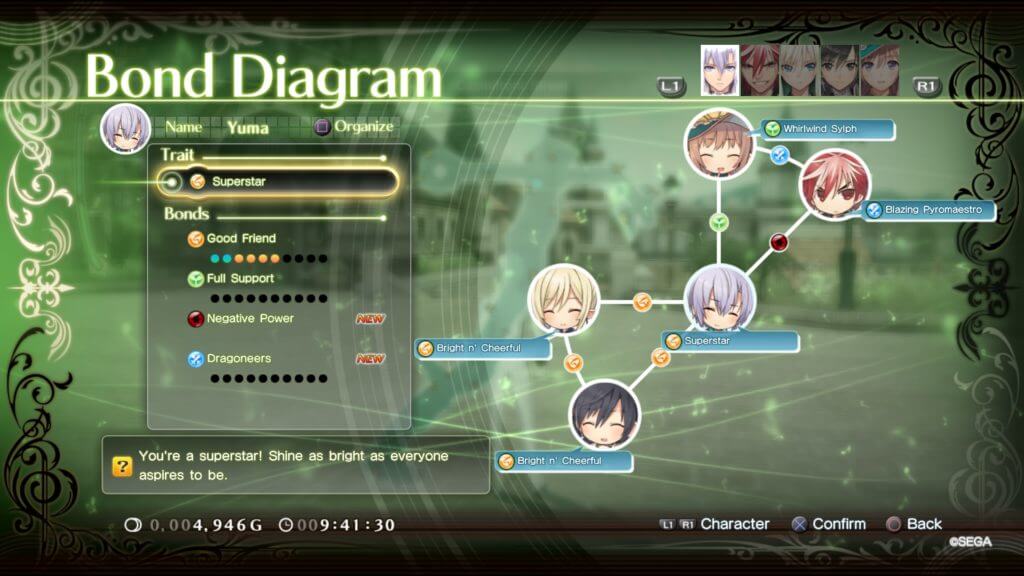 Japanese Role-Playing games tend to have soundtracks that can seem to all blend together at times, and while some of Shining Resonance: Refrain’s tracks do follow that stereotype, many do not and quite a few of them are catchy. (I’ve found one or two stuck in my head for a few days now.) I do wish that there was a greater presence of orchestral tracks, given the game’s heavy musical theme. The lack of such doesn’t ruin the audio experience per say, but having it there would add another level of immersion.

After over a dozen hours put into Shining Resonance: Refrain thus far, the story has kept me curious to see what happens next. As with most JRPGs worth their salt, the crux of the narrative is within each of the unique characters, what they bring to the team and how they interact with the other members. The battle system alone is enough for me to want to play for hours on end, but here’s hoping that the story holds up its end of the bargain as well. If you enjoy JRPGs with fast and enjoyable combat (specifically if you happen to be a Tales of fanatic like myself) or just the genre in its entirety, I’d give Shining Resonance: Refrain a fair shake.

Beautiful characters to look at combined with a battle system that is responsive and fun to watch, and a story that keeps you interested make Shining Resonance: Refrain a great title to grab for anyone who is a JRPG fan.