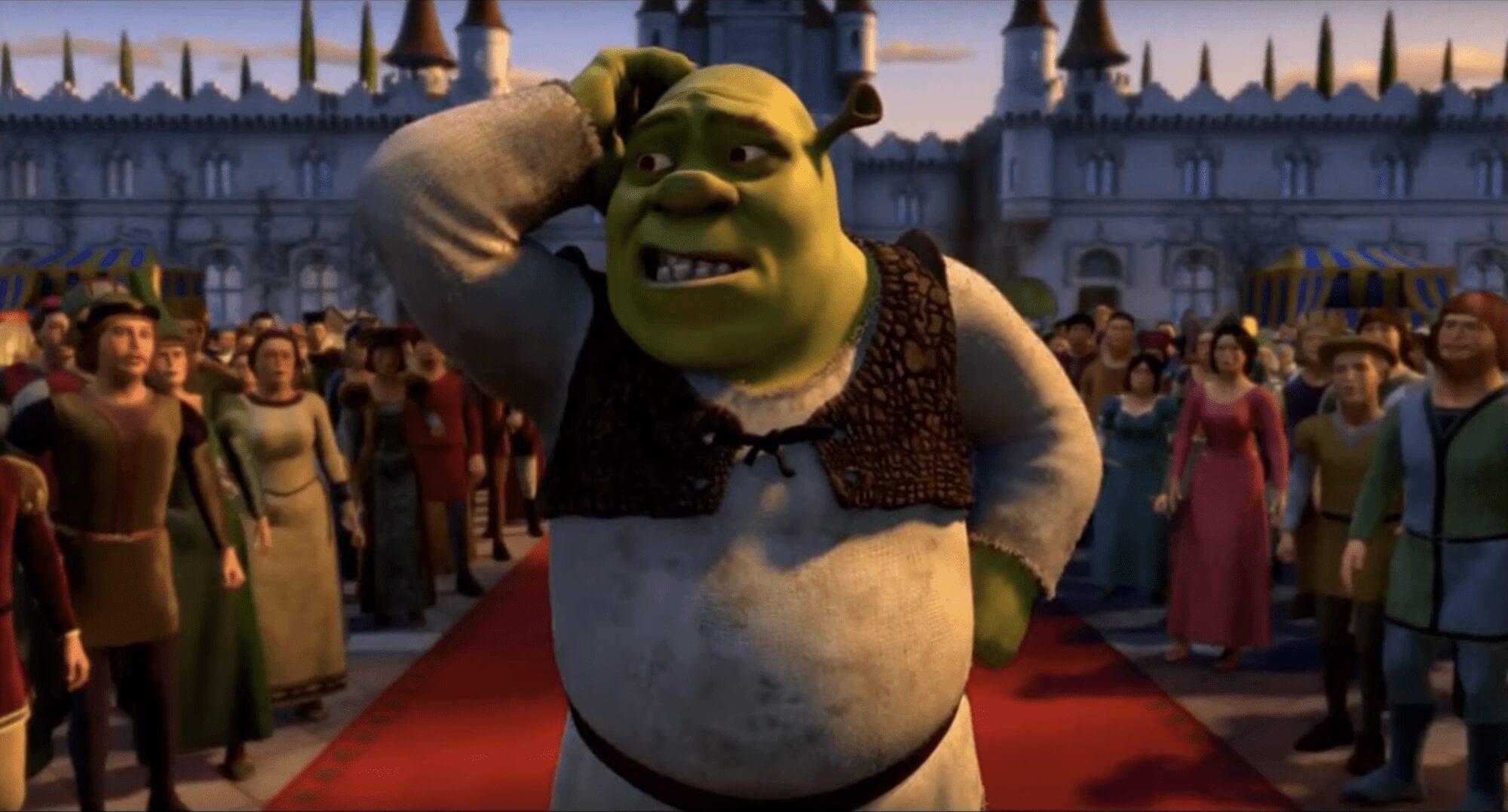 Conventional wisdom tells us that sequels are usually a bad idea and never as good as the original movie. Every now and again, there’s an exceptionally good sequel that shakes things up, expanding on themes and characters from the original while also exploring new ones. I’ve always considered The Empire Strikes Back and Toy Story 2 to be the best movie sequels of all time. They both improve the comedy, deepen the characters, and introduce new and interesting themes. I know, not exactly a hot take there. The next great animated sequel came in 2004 in the unexpected form of Shrek 2. Again, not exactly a revolutionary outlook to take on the film. Shrek 2 is the only Shrek film I actually like. However, I will be watching Shrek the Third and Shrek Forever After to review them, so my opinions may shift slightly. Re-watching Shrek 2, everything was as good as I remembered, and I even noticed some new things. Let’s have a look.

Shrek 2 rejoins Shrek and Fiona on their honeymoon, treating us to a montage of their misadventures and various movie references. When they get back home, Donkey is waiting for them and ready to annoy Shrek. As soon as Shrek has explained why he needs to be alone with Fiona for a while, the reunion is interrupted by a messenger inviting them to Far, Far Away, the kingdom Fiona is from. Shrek refuses to go, but Fiona and Donkey ultimately get their way. After a long and unpleasant carriage ride, they arrive, and things go much as Shrek expected. Commoners gawk, babies cry, and a bird flies into a building and dies, horrified at the sight of the ogres. Fiona’s parents, the King (John Cleese) and Queen (Julie Andrews), were literally expecting their human daughter to arrive with Prince Charming. At dinner, the King makes his displeasure even more evident, accusing ogres of eating their own young and mocking Shrek’s swamp. For his part, Shrek questions the decision to lock Fiona in the tower, and the argument devolves into a literal food fight. Fiona storms off and is unexpectedly comforted by the Fairy Godmother, who wants to pair her up with her son, Prince Charming. The next morning, Shrek agrees to go hunting with the King to patch things up. However, instead of the King, Shrek and Donkey encounter Puss in Boots (Antonio Banderas). He attacks Shrek, but it doesn’t end up being much of a match. Shrek spares Puss’ life, and he reveals that the King hired him to kill Shrek. Believing that Fiona wants and deserves the fairy tale life she’s always been promised, Shrek breaks into Fairy Godmother’s factory and steals a beauty potion. The potion turns Shrek into an attractive human man, Fiona into her former human self, and Donkey into a white stallion. However, Fairy Godmother quickly realizes what happened and uses it to her advantage. Before Shrek can get back to the castle and explain everything to Fiona, Prince Charming convinces her he’s Shrek in human form. Fairy Godmother uses the sight of the two embracing to convince Shrek that Fiona is happy and he needs to move on. However, when Shrek goes to the bar to mope with his friends, he hears familiar voices. Fairy Godmother, Charming, and the King are arguing over their plan to replace Shrek with Charming. It becomes clear that Fiona isn’t accepting Charming and knows something’s up. This heartens Shrek to get to Fiona, but Donkey gives away their position, and Fairy Godmother sends guards after them. It’s a mad dash to escape from prison, find Fiona, and tell her the truth before midnight, at which time the spell will either fade away or become permanent with true love’s kiss.

I’ve always liked Shrek 2 better than the first one, which I don’t recall re-watching much as a kid. They both parody fairy tales and pop culture, but Shrek 2 does a lot more with that concept, and it feels less mean-spirited. One of my favorite scenes in the film comes in the form of its opening montage set to “Accidentally in Love” by Counting Crows. I was surprised to learn this song was written specifically for the film. I heard this song so often as a kid that I assumed it was just another popular song co-opted by a franchise known for doing so. This makes sense, though; the lyrics fit in so well with Shrek and Fiona’s relationship. The upbeat, playful tune accentuates their wedded bliss, and this scene displays the improved tone and comedy. These movie references are funnier because they’re not hateful; this isn’t just Jeffrey Katzenberg vindictively trying to make his old cronies pay. Directors Conrad Vernon, Kelly Asbury, and Adam Adamson bring more love for the properties they mock where there was previously a sense of bitterness. They also parody a wider array of films and stories instead of repeatedly bashing decade-old Disney films. It feels fresher for the variety, and more of the jokes land because it’s less repetitive. 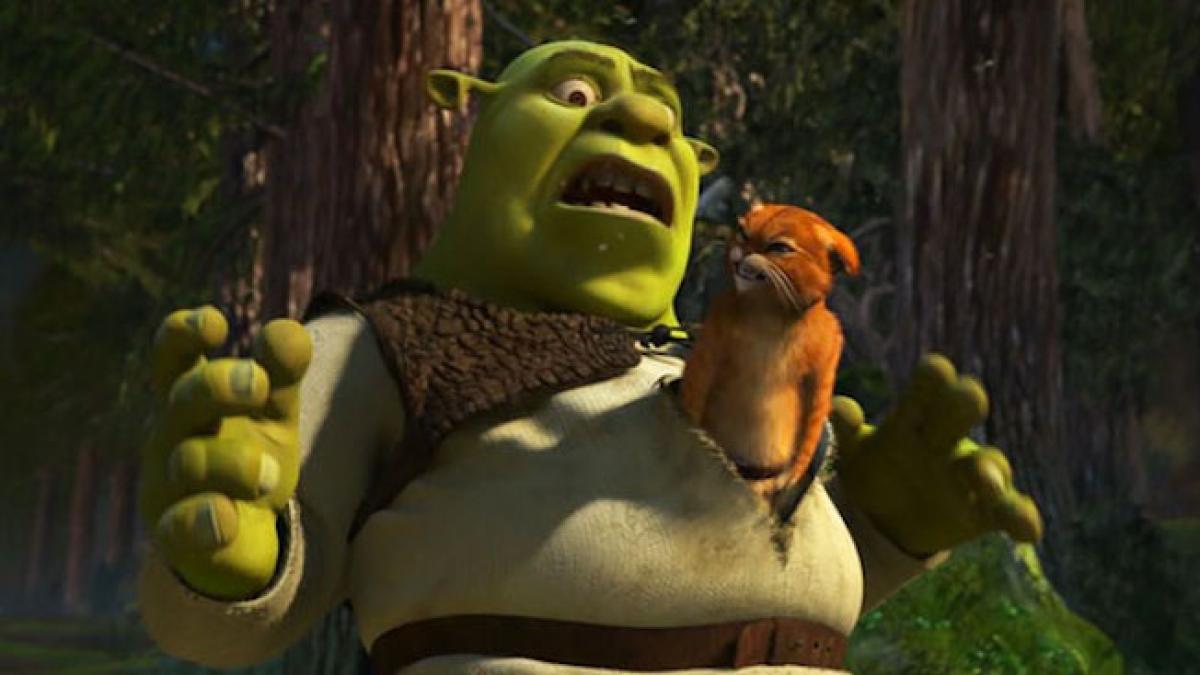 The characters are also handled better here. They had plenty of personality in the first movie, and everyone’s goals were clear, but most of them weren’t particularly likable. Shrek was a hated ogre rejected by society, but he was also a huge jerk. I understand that his behavior was a reaction to his treatment, and he still seems consistently Shrek here. However, they develop him more and give the audience more reasons to like him. He wants Fiona to be happy, but he knows going to see her parents as ogres isn’t a good idea. He tries to make it work once he meets the parents but quickly loses his temper when the King hurls abuse at him and responds in kind. It really feels like they shifted from trying to make Shrek an edgy outsider to a realistic character with feelings. Donkey’s jokes are also less grating this time around. I will say that Fiona is less of a character here than she was in Shrek. She really becomes more of a goal or plot device, where in the first film, she was an active participant in the plot. I also find her more likable, though, especially near the beginning when she reminds Shrek that she’s made changes for him. His position is understandable, but hers is, too. She just wants a nice visit with her parents, and while the fights aren’t entirely Shrek’s fault, he isn’t helping, either. 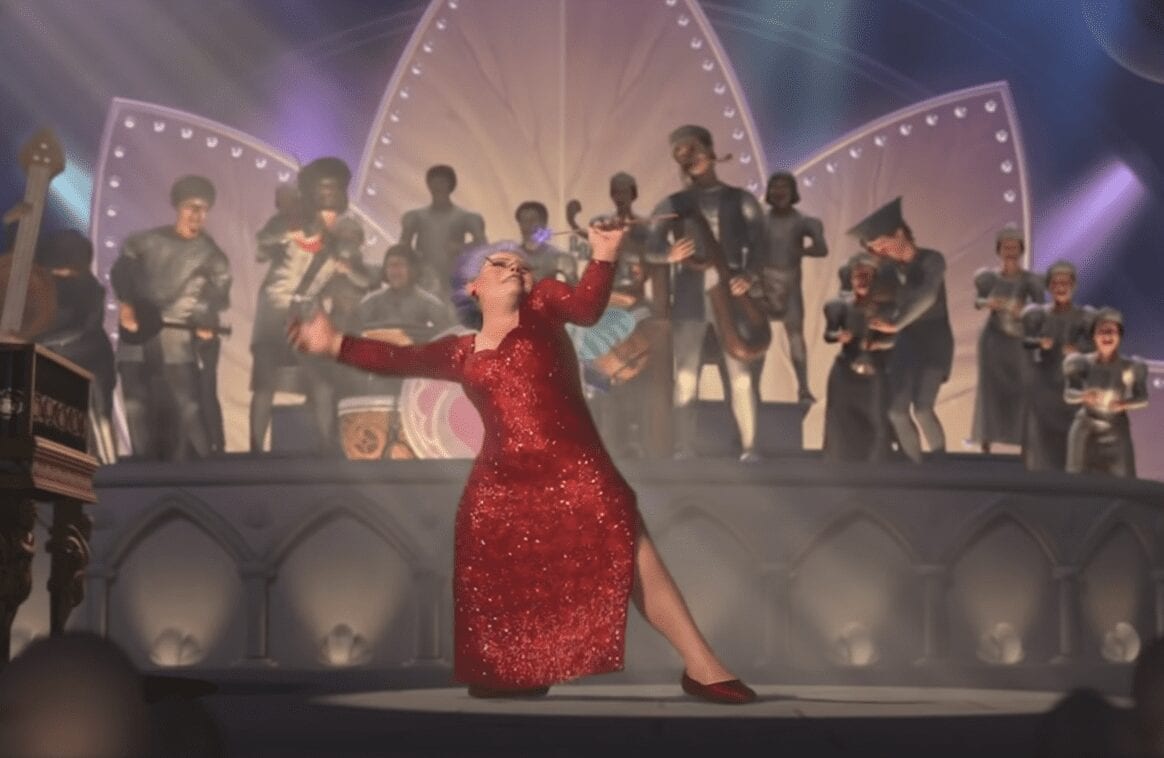 While I love John Lithgow, Jennifer Saunders’ Fairy Godmother is a considerable step up from Farquaad as the villain. She’s funny, glamorous, and has a killer set of pipes. There’s a reason this has become the definitive version of “Holding Out for a Hero” in the intervening 17 years. Actually, there are two reasons; this arrangement is an absolute banger, and this woman’s voice is electrifying. This sequence, which balances the dance between Fiona and Charming with Shrek and friends running to the palace, is my favorite. This is four minutes of pure adrenaline. While there are other DreamWorks movies I prefer overall, this is a top-5 contender for the best individual scene. John Cleese and Julie Andrews are also delightful as Fiona’s parents. Cleese is hilarious, and I only wish we could have gotten inside the King’s headspace a little more. But what we get is excellent, and the movie isn’t about him. Rupert Everett is funny as Charming, a narcissist whose “mummy” does everything for him. Puss is actually one of my favorite characters in the whole ensemble, and Antonio Banderas is equal parts charming, funny, and intimidating (albeit briefly). I like the soundtrack here better than the first movie too, and for many of the same reasons I think the characters, story, and comedy work better. These songs aren’t inherently better, but they feel like they were carefully selected to explore character motivations and emotions rather than create an edgy sound. Even though it only plays in the credits, “You’re So True” by Joseph Arthur has become one of my favorite songs.

Overall, I think Shrek 2 is actually what many people believe the first Shrek to be. It’s funny, it’s heartwarming, the pacing is phenomenal. I found myself bored with some scenes during the first film, but Shrek 2 is very tightly written, and nothing is wasted. The animation is gorgeous and noticeably better than the first time around. The characters are more likable and funnier this time, and the references to other movies are utilized better. Shrek 2 isn’t my favorite animated movie of 2004, but it might have been if it wasn’t in such a competitive pool.

Thank you for reading and commenting!

Absolutely. This movie took the best parts of the first one and took them to new heights. Great review!!

Thank you for reading! Glad you liked it as well.