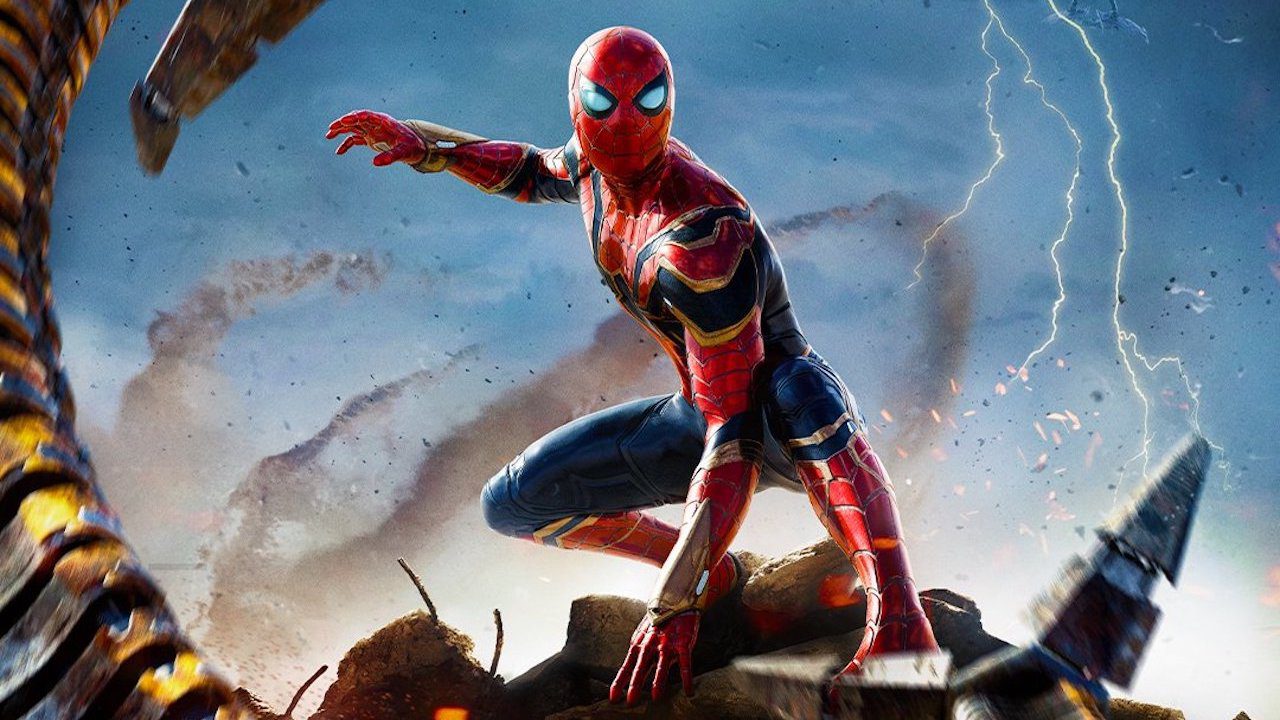 Spider-Man: No Way Home had me worried from the start. I’d enjoyed Spidey’s previous MCU films very much, and while I haven’t cared for some of the changes made to his lore, I had faith that it was leading somewhere and decided to go with it. Then, they announced that the third movie would involve the multiverse and that Peter’s rogues’ gallery from the older series would be entering the MCU to menace him, and my excitement abated. This was a sure sign that Tom Holland’s Spider-Man wasn’t being taken seriously, that the previously patient Marvel Studios was going to fast forward through his development to give us empty spectacle aimed squarely at our nostalgia buttons. Well, the spectacle is there, but it’s far from empty; No Way Home is a big, fun superhero movie, but its biggest surprise is how well it works as a Spider-Man movie.

Following his outing in Far From Home, Peter Parker deals with the fallout of having his secret identity revealed: endless media stalkers, a public divided between loving and hating him, the crushing boot of the government, and worst of all, his friends and family being put through as much hell as he is. Finally, he gets the idea to ask Doctor Strange to make the world forget they know he’s Spider-Man. But the spell goes wrong, unleashing monsters from the multiverse, all of whom want to kill Spidey.

One of the more prevalent complaints about the last two Spider-Man movies was that Peter didn’t suffer enough, and there weren’t any lasting consequences to his actions. (I think there’s some truth to it, although there are moments of great consequence in both films; having Peter destroy his girlfriend’s entire life to stop her father is pretty crushing.) As soon as Spider-Man: No Way Home starts, life begins beating down Peter. The aftermath of Mysterio’s final revenge is expounded on in great detail, including the toll it takes on those who know him. Peter has some resources, but with Tony Stark gone and the Avengers not really a thing anymore, it doesn’t look all that cool to be Spider-Man. Not only does his suffering help Peter feel more human, but it triggers his visit to Doctor Strange and the spell request.

The plot is more or less what you’d expect from the marketing. You know that all the former Spidey villains are coming back to face Tom Holland’s web-slinger thanks to a spell-gone-wrong. Initially, I didn’t think this would work; the early scenes with Doctor Strange are slightly better than they seemed in the trailer, but they’re still by far the weakest part of the film. While Strange going along with Peter’s request isn’t quite as dumb as it seemed, it still feels reckless and out of character for him, and Peter’s interference is somewhat more believable but still makes him look dopier than it should. Beyond the actual story beats, though, are the characterizations, and those are what work. Peter is desperate to spare his loved ones from the guilt-by-association the world has foisted on them, and Doctor Strange takes pity on a kid who suddenly had life-altering notoriety thrust upon him. These are the early steps to a couple of great arcs, and while it’s a little rough going in the beginning, it’s well worth it. 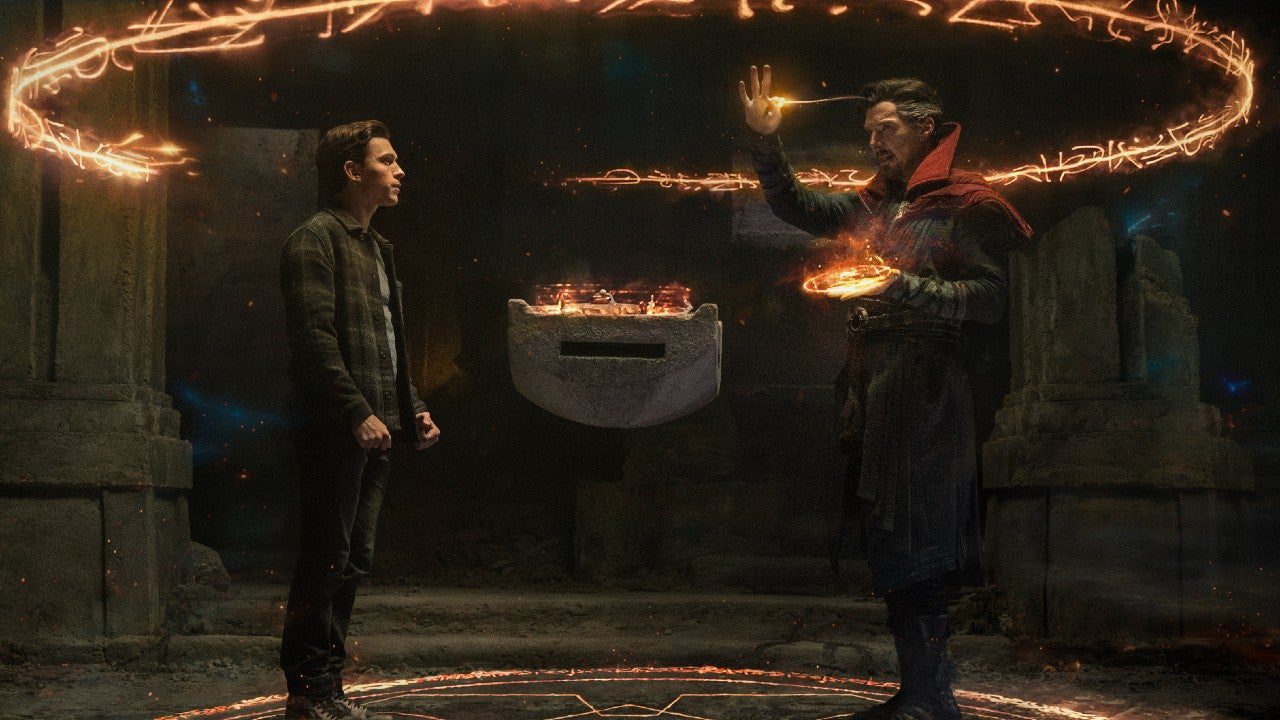 Also worth it, and I can’t believe I’m saying this, is the multiverse story. Spider-Man: No Way Home does all the things I wished it wouldn’t and uses them to craft a human, heartfelt story about what it means to be a hero. Amy Pascal described the “Homecoming Trilogy” as Peter growing up, and No Way Home feels like the last leg of that journey. This is Peter’s transition into adulthood, as well as to being a hero in a way that makes sense to him. And the villains not only contribute to that development but have arcs of their own, becoming even more three-dimensional than they were in their original appearances. As much as the nature of a hero is explored through Peter, that of a villain is examined through the bad guys, and it’s done without diluting their menace. Your heart will break for some surprising people in this movie, and the writing that gets them there is tremendous.

So too is the acting. Spider-Man: No Way Home has a slew of terrific performances, starting with Tom Holland. He’s more human than he’s ever been in this one, and I’ve loved him in all of his appearances. You can see how he’s aged, not just physically but emotionally, since he first showed up in the MCU, and his struggles with himself and the results of the mayhem he inadvertently unleashed are believable and sympathetic. This is also Zendaya’s best performance as Michelle, in part because they’ve mostly toned down the “look how cool I am” vibe she gave off in the last two. She and Jacob Batalon’s Ned become more than just amusing sidekicks this time, faced with the reality of being close to a superhero with some deadly enemies. The same goes for Marissa Tomei as Aunt May; she comes into her own in No Way Home in a way the other films didn’t allow her to, and while she’s still very different from the classic version (read: hot), she’s more like May in spirit this time.

Equally great work comes from the villains, especially the main ones. Willem Dafoe is the standout; he imbues Norman Osbourne with new dimensions, finding still more layers to his already compelling character. Alfred Molina, too, is excellent as Doctor Octopus (why are we suddenly treating “Doc Ock” like it’s his official name rather than a silly nickname Spider-Man uses to mock him?), finding Otto’s humanity underneath an angry man seeking to share his misery with the world. Jamie Foxx’s Electro is mostly just fun, a criminal who has embraced being bad. Sandman and Lizard get a bit of a short shrift by necessity, but in their limited time, they show human faces to their monstrous characters. Finally, Benedict Cumberbatch can play Doctor Strange in his sleep, so good has he become so quickly, but the character is the weakest point of Spider-Man: No Way Home. While he has great moments, and I like his arc as it relates to Peter, he’s too silly in other places, and some of the jokes are bad. I’m hoping this is the final mentor-style character for Spidey because Strange’s appearance proves the trope has worn out its welcome.

The technical aspects of Spider-Man: No Way Home are mostly good, although it falters a bit in its special effects. A lot of them are phenomenal, like Doctor Octopus’ arms or the vistas of opening multiverse portals. But some fall well short of a big-budget movie like this; the most glaring is the Lizard, who never looks like anything more than a cartoon. Every time he opens his mouth, you’re taken out of the movie. The action scenes are thrilling and visceral, particularly a down-and-dirty fistfight that closes the second act. The advantage of having so many villains is that they each have a very particular set of weapons or abilities, and director Jon Watts makes full use of that, meaning the action never grows stale. The score compliments that splendidly. I’ve always liked the Spider-Man theme from his MCU appearances much more than either of the previous versions, and it continues to function equally well as Spidey’s theme music and an exciting action tune. A few hiccups aside, this is pure superhero spectacle, and it’s a relief after a stale slate of would-be blockbusters.

Spider-Man: No Way Home is a heartfelt celebration of Marvel’s flagship character, an exciting adventure that uses its multiversal trappings to explore what makes a hero and why Peter Parker is one of the greatest. The setup is a little rocky, some of the special effects don’t work, and Doctor Strange can hamper the narrative from time to time, but the whole is spectacular. Do your best to stay away from spoilers!

Spider-Man: No Way Home is a heartfelt celebration of Marvel’s flagship character, an exciting adventure that uses its multiversal trappings to explore what makes a hero and why Peter Parker is one of the greatest. The setup is a little rocky, some of the special effects don’t work, and Doctor Strange can hamper the narrative from time to time, but the whole is spectacular.

I am definitely watching it. Though, not for another few days because I am visiting my sister and her kids for Christmas. Question; it’s off-topic but as I said, I LOVED Daredevil and The Punisher (possibly more than MCU movies which says a lot) but it Jessica Jones worth seeing too? Not sure if you reviewed it ever but would you you recommend it?

Season 1 of Jessica Jones was great, but season 2 wasn’t very good. I didn’t watch the third one because it got canceled and I figured there wasn’t much point, especially after season 2.

If you haven’t been spoiled yet, I’d recommend staying off social media as much as possible till you see Spider-Man. The spoilers are everywhere.