REVIEW: Spirit: Stallion of the Cimarron (2002) 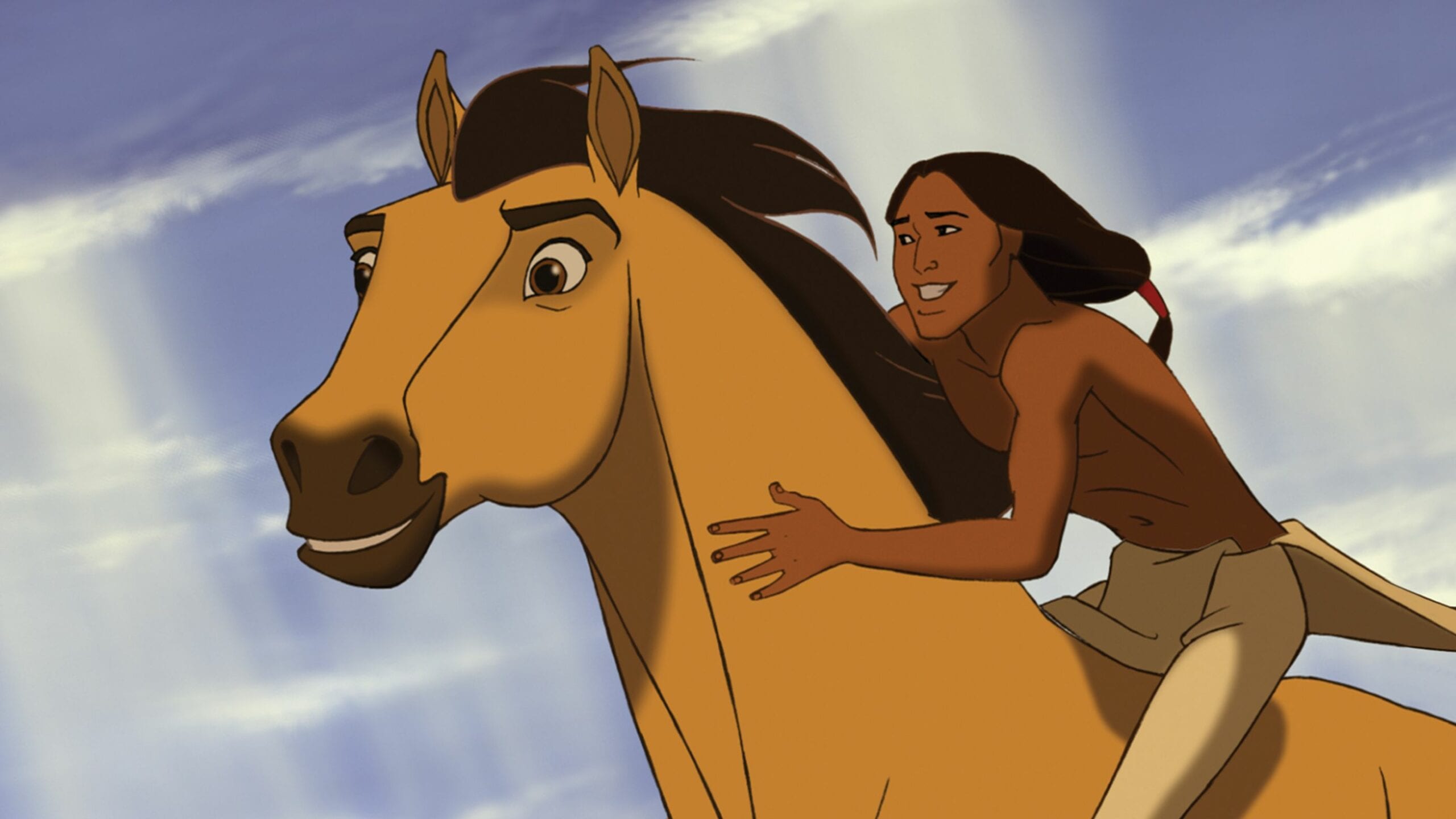 I’ve always wondered why people don’t often discuss DreamWorks Animation’s hand-drawn animated films. Maybe it’s because the studio itself so rarely promotes them, or perhaps they got swept up in all the other traditionally animated movies of the day. Aside from The Prince of Egypt, all of these efforts from DreamWorks were box office bombs, and their critical reception was hit-or-miss. After Shrek, the studio’s next release was Spirit: Stallion of the Cimarron in 2002. The Road to El Dorado and especially The Prince of Egypt have attained cult status with devoted fan followings online, but I never hear anything about Spirit. I didn’t even see this film when it was released, although I remember the Happy Meal tie-in toys, some of which I had. I saw it a few years later and was left somewhat underwhelmed. I didn’t hate Spirit, but it lacked both the subtly powerful storytelling behind The Prince of Egypt and the madcap, character-driven comedy of The Road to El Dorado. I remember feeling more bored than anything during the brief 86-minute runtime. However, like many people, my tastes change over time, and I’ve wondered more than once if this is one of those films that appeal more to adults. For example, as a kid, I didn’t care much for Bambi or The Hunchback of Notre Dame at all. While Bambi isn’t one of my favorites by any means, both films have artistic value I couldn’t appreciate then. It’s notable that, in Spirit, none of the animals talk, which may have put kids (myself included) off or bored them. I was also intrigued by the Spirit spin-off TV shows Netflix put out recently. They look to be set in the modern day, sharing nothing with the film except for the titular horse. I’m not sure if I’ll bother with either series, but I can’t help but be curious about loose tie-ins with a 20-year-old, mostly forgotten film. Regardless, I, of course, rewatched the movie for this review to see if I felt any differently about it now. Let’s take a look.

Spirit: Stallion of the Cimarron follows a wild horse from birth to adulthood. Once he comes of age, Spirit becomes the leader of his herd, taking on responsibilities like protecting the foals from mountain lions. All seems well until Spirit finds a group of humans and gets too curious, waking them up and getting himself captured. He ultimately ends up on an Army base with a Colonel (James Cromwell) intent on breaking and training him. Although he’s initially reluctant to trust any humans, he eventually befriends a Lakota Native American named Little Creek (Daniel Studi). Both captives of the Colonel, they make a daring escape and free the other horses in the process. To Spirit’s dismay, he’s tied up again once Little Creek gets him home to his tribe. However, there he meets Rain, Little Creek’s mare. Her mutual trust and affection for the humans confuses and disgusts Spirit, but he likes her immediately. Spirit changes hands several more times throughout the movie, and Rain has a long fall, leaving her stranded and motionless as Spirit is again dragged away. Once he finds Little Creek and Rain again, Spirit is torn between staying with them or finding and rejoining his herd.

Spirit: Stallion of the Cimarron is simply gorgeous to look at. Some CGI elements can be distracting, especially in the beginning. However, the horses, the landscapes of the unsettled West, and the sky are just breathtaking. The designs and movements of the horses are the definite visual highlights of the film, although the colors of the sky and the clouds are very pretty too. I still prefer the epic look of The Prince of Egypt and the radiant colors of El Dorado, but I admire what this film did, and it excels at what it’s going for visually. However, the human characters are one gripe I have with the hand-drawn imagery. They’re not distractingly bad, just not very distinctive. This is forgivable with the random soldiers and people working on the railway, but the Colonel and Little Creek should have gotten a little more attention in this area. I could only distinguish the Colonel because of his uniform and Little Creek because his two friends look like background characters from El Dorado. 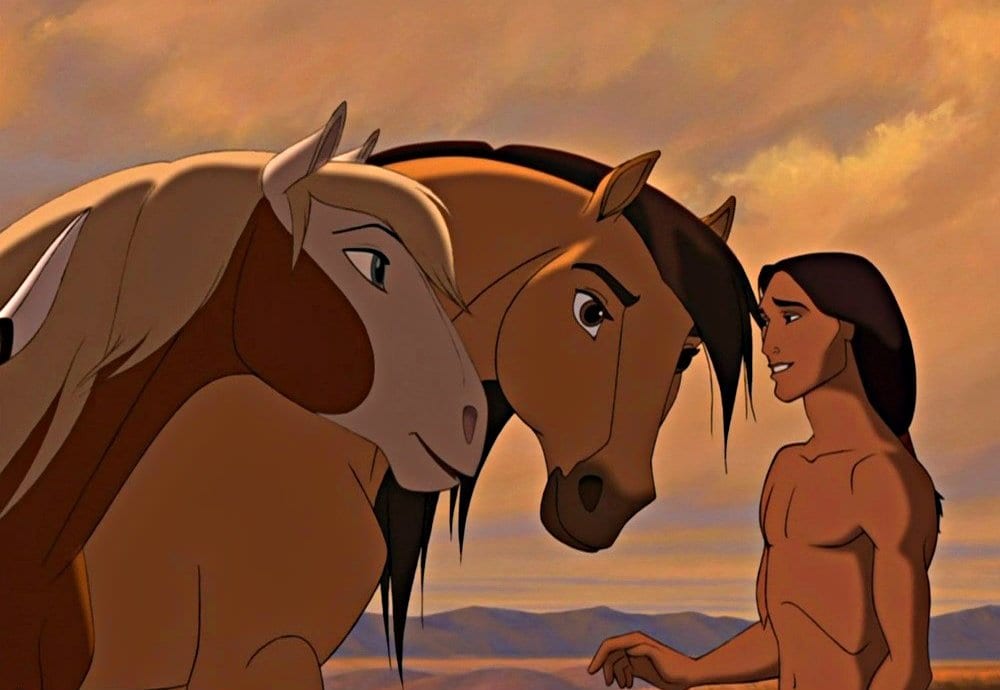 The film’s original score is provided by Hans Zimmer, who worked wonders with The Prince of Egypt. However, while the music in Spirit: Stallion of the Cimarron is generally uplifting and adventurous sounding, it’s not very good or, again, distinctive. While watching the film, I remarked to my husband that it sounded like aggressive, upbeat muzak, and he agreed. I normally love Zimmer’s work, and it’s not bad here; it’s just so nondescript. Rather than feeling like an organic extension of the film’s story, this sounds like music that could have come from anywhere. I have similar feelings about the Bryan Adams songs that play over various scenes. A lot of people complain about Phil Collins’ songs for Tarzan, and I’ve never understood it. They’re gorgeous, I like the lyrics, and they move the story forward and develop the characters. However, rewatching Spirit, I got the feeling that this must be the sensation those people are referring to when they watch Tarzan. Adams is musically narrating the thoughts of Spirit because neither he nor the other animals in the film speak. I don’t dislike these songs, but they sound like generic pop-rock to me. And I like some of Adams’ music, so it’s not him specifically that’s the problem here. In The Road to El Dorado, Elton John’s songs are not only very good and genuinely catchy, but they’re integral to the film’s identity. If you took “The Trail We Blaze” out of the scene in which Tulio and Miguel travel to El Dorado, it wouldn’t work at all. The upbeat song contrasts to the hardships and antics they run into so that the audience gets the impression that it’s a perilous journey but still a fun adventure of self-discovery. If you remove the songs in Spirit, nothing of artistic or narrative value would be lost. Most of the time, it’s obvious what Spirit and his friends are thinking by their body language and facial expressions. This is the magic of animation at work, and I wish they would have let it speak for itself. I know this movie was for a family audience, but kids aren’t that dumb. If the character has his intentions written all over his face or is slumped over in defeat, I think they’ll understand that.

The voice acting in Spirit: Stallion of the Cimarron is pretty good. Wes Studi’s son Daniel is great as Little Creek, especially since, more often than not, he’s talking to horses who can’t respond. James Cromwell is excellent as the Colonel, although I don’t like this character’s redemption arc, if you can even call it that. This has nothing to do with Cromwell’s performance; it’s just strange writing. The Colonel is a person driven by a need for control. He wants to control the westward expansion of the United States, control the Native population, control the horses. He’s not terribly complex or sympathetic, but I think he works rather well as the film’s villain until the end. At the end, when Spirit and Little Creek have escaped again, one of the soldiers aims his pistol at them, but the Colonel orders him to lower it, nodding at his adversaries as they walk away. I think they’re trying to retroactively say the Colonel is the kind of person who respects an equal enough to let them be once they’ve proven themselves. However, this makes little sense. Spirit never relented to him or his training in the first place, and Little Creek has proven himself a more than capable foe several times already. Why would the Colonel chase them across the desert and prairies more than once, just to let them go? It’s very inconsistent. If this was an attempt to humanize the Colonel and show he isn’t all bad, it’s too late in the film and clashes with every other thing he’s done and said. Finally, we have Matt Damon as Spirit. As I said, Spirit doesn’t talk, just like the other horses and creatures in the film. However, Damon intermittently narrates Spirit’s thoughts and gives us empty platitudes about freedom and the power of an unbreakable spirit. Damon’s read is quite good; I just question the necessity of a narrator. We already have obvious body language and facial expressions, not to mention the songs which literally tell us what Spirit thinks or wants. Any one of these elements could have worked fine, but all three? I would have stuck with the movements of Spirit to tell us how he feels. After all, nobody narrates Rain, his mother, or any of the other animals in the film, yet we can plainly tell what they’re thinking. It’s especially egregious when Rain has her accident and Damon chimes in, saying he was hoping and praying she would be okay. Spirit slumps down next to her, visibly distraught at her situation. I don’t think it was necessary or beneficial to verbally explain this to the audience. I like Damon’s opening and closing monologues, introducing us to the film and finally saying goodbye to Little Creek. But I would have cut everything else from him, and probably the songs too. It’s not good to force-feed your audience information that’s already obvious. 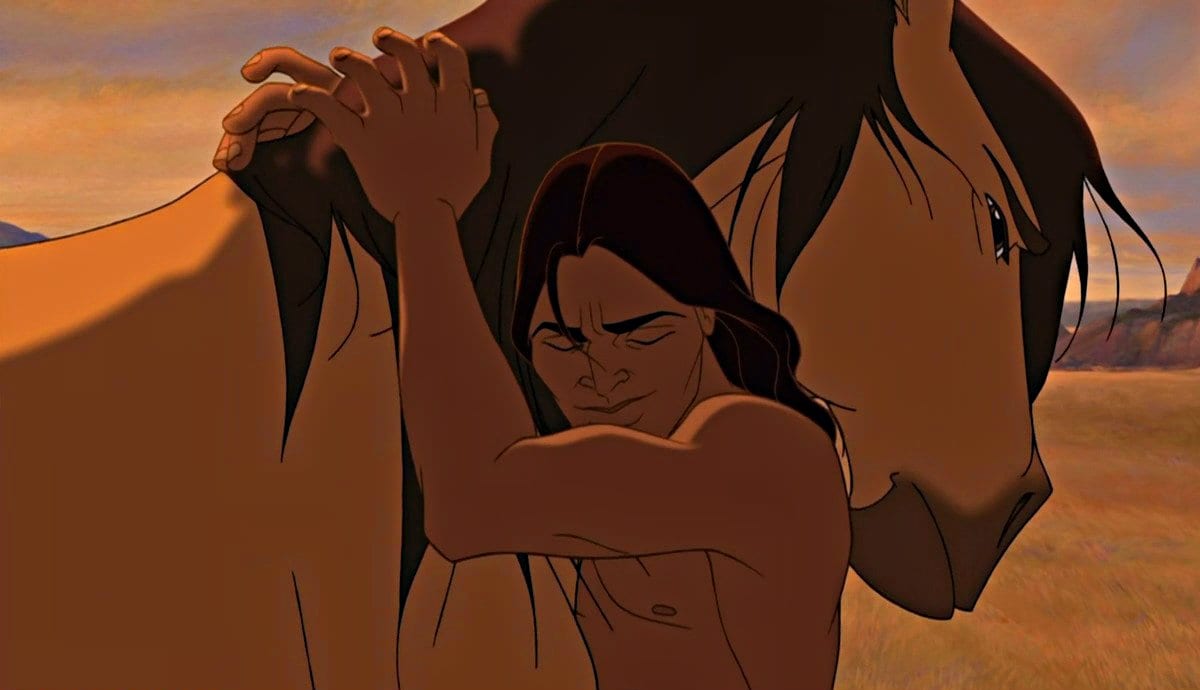 Overall, Spirit: Stallion of the Cimarron is fine. The voice acting and visuals are outstanding, but it’s hindered by redundant storytelling and inconsistent characterization of its villain. I would say it’s worth watching once for the beautiful animation alone.