Star Wars Rebels returns from the show’s mid-season hiatus to deliver the first two episodes of the series’ final run. Things got quite a bit hairy in season 4’s mid-season finale with Hera being abducted by the Empire, and Rebels wasted zero time having our heroes stage a rescue attempt. Both episodes offered an awesome way to not only pick things back up, but to send off the show with its final episodes.

“Jedi Night” opens with an emotional and beautiful scene between Jedi Master and Apprentice, Kanan Jarrus and Ezra Bridger. Kanan decides to ask Ezra to devise a plan to save Hera, because he believes his own feelings for her will cloud his judgment and possibly foil any plan he may come up with. Ezra understands this, so he gets to work with the rest of the team  – Sabine, Zeb, and Chopper  – and discovers a clever ruse to get them into the heavily fortified Imperial base where Hera is being held. The plan is a bit cartoonish (well, this is a cartoon – a Disney one at that), but it works out. 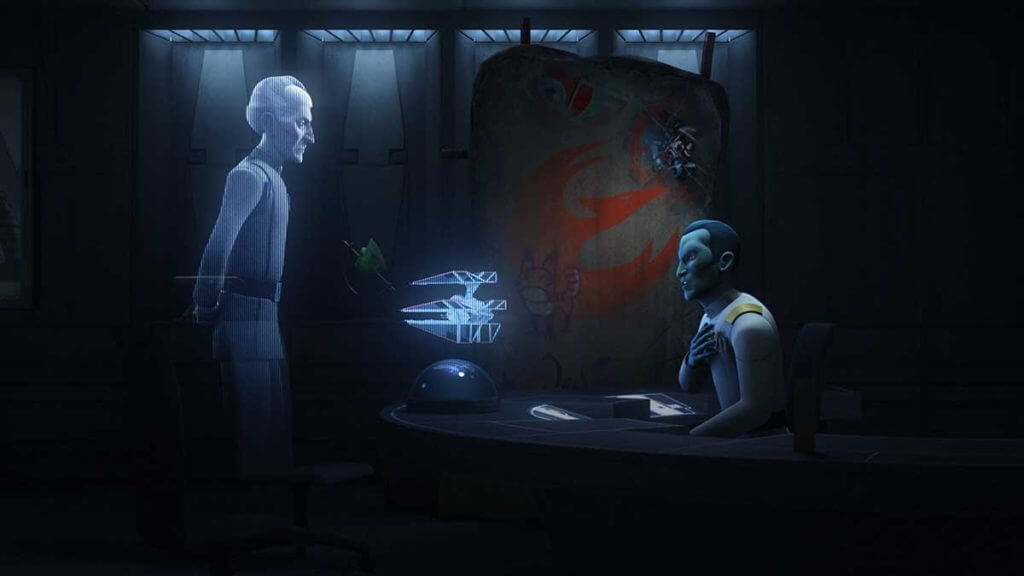 Meanwhile, Hera is being interrogated heavily for the location of the Rebels. Both Thrawn and Governor Pryce try their hands, with Thrawn preying on her Twi’lek culture, history, and her family. Pryce, on the other hand, uses a method we have seen before: an interrogation droid – just like the one we saw used on Leia in A New Hope. Fortunately, before the drug administered by the droid can force Hera into saying anything incriminating, Pryce is distracted, and this opens the window for Kanan to save the day.

Before things really hit the fan, we see Hera and Kanan share a heartfelt moment, one where they both affirm what most of us have suspected since both the beginning of Rebels and the novel A New Dawn – they are in love. While the fact that we finally get this revelation only due to the truth drug Hera is afflicted with sort of cheapens it, it’s from this point on that Rebels attacks straight for the feels. Besides saving Hera, the overarching mission this season is to ultimately remove the Empire from Lothal, so the team decides to take the “two birds, one stone” route and destroy the fuel depot supplying Thrawn’s TIE Defender production facility. This comes at a fatal cost, as we lose a character to death by explosion as they make time for the others to escape.

Kanan Jarrus is dead. While the Rebel’s transport is waiting, one of the fuel depots explodes, and could potentially destroy the transport. Kanan stays back and uses the Force to create a barrier, keeping the explosion and flames at bay. Hera, who we know just confessed her love for Kanan, attempts to stop him, but he uses the Force to push her back to the transport. With his final look at Hera, Kanan’s eyesight returns, and those grey eyes revert to their natural color, so the last thing he saw was the woman he loves. So, not only did Kanan die protecting his “family”, he died so the mission could be completed. 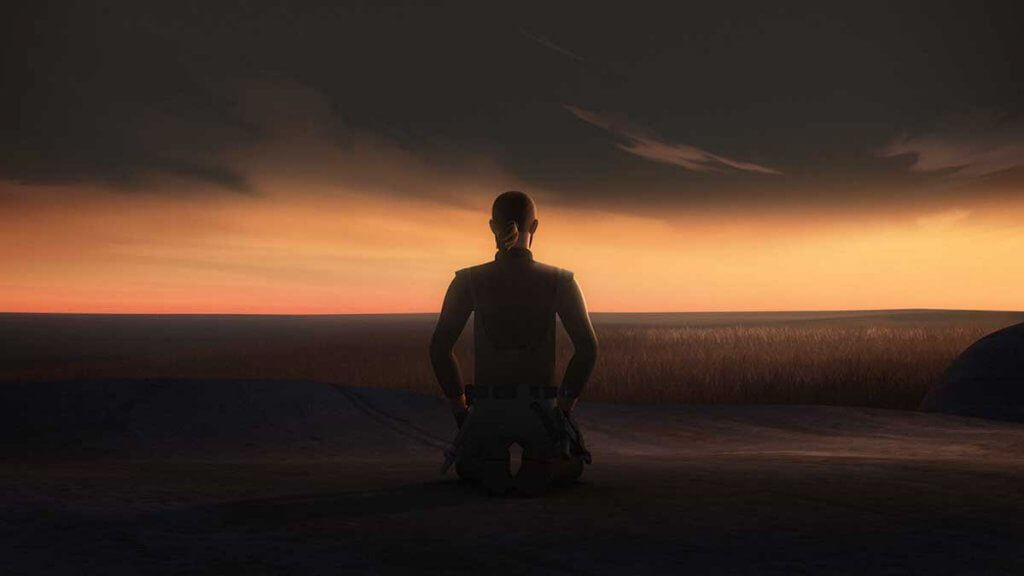 At this time, Thrawn has been called offworld to Coruscant to meet with the Emperor. Pryce has been in command in his absence, and so she decides to throw a parade in honor of Kanan’s death to distract from the fact she allowed the fuel depot, as well as Thrawn’s TIE Defender factory, to be destroyed. Pryce has Kanan’s lightsaber as proof he is dead, but upon finding out what really happened, Thrawn is none too pleased, and vows to rain vengeance on the Rebels, as well as on Pryce herself.

Back with the rest of the team, everyone is grieving over Kanan’s death in different ways. Hera sits in isolation and ponders why she hadn’t told Kanan how she felt sooner. Sabine and Zeb decide to crash the Empire’s parade the only way they know how – destruction. That destruction gets them into a fight with Rukh, Thrawn’s enforcer. This encounter proved to be very intense, as many fans are expecting quite a few deaths in these final episodes (my money has been on Zeb for a long time, personally), so it was hard to watch two characters we love fight a formidable opponent like Rukh. Thankfully, neither Zeb nor Sabine died here, and they both defeated (not killed) Rukh while sending a message that the Rebels are still ready and willing to fight, even without Kanan.

Ezra’s story here was the most interesting. He dealt with the death of Kanan, who was not only his Master, but also a father figure, like a Jedi – by meditating. His meditation lead to him being chased by a pack of giant Loth-wolves, and to eventually becoming lost. While meditating one final time, Ezra finds himself in communication with the leader of the pack, who mysteriously calls himself “Dume,” which is actually Kanan’s birth-given last name (Caleb Dume). During this meditation, a stone tablet from Lothal’s Jedi temple is given to Ezra, and it is made clear that something must be done concerning this temple. 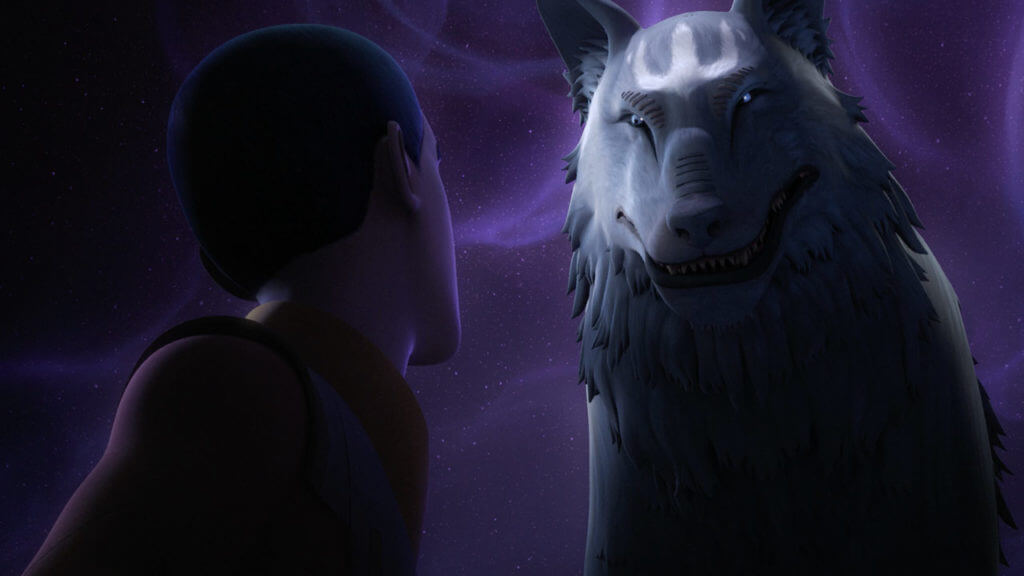 “Jedi Night” and “Dume” were both excellent episodes to kick viewers back into gear as we head towards the series finale of Star Wars Rebels. While some things about the episode were a bit far-fetched, and the way in which Hera’s love for Kanan was confessed didn’t quite do it for me, everything else about these two episodes was excellently handled. We all knew a big death was coming sooner or later during this final run, but I honestly didn’t expect it to be this soon. It will be extremely interesting to see how this chapter of Ezra’s story comes to a close without his Master, and it will be just as interesting to watch how Hera deals with this death, given we now know she lives on past Return of the Jedi.

For reviews on the rest of season 4 of Star Wars Rebels, and just about anything else Star Wars, keep your browsers locked to Geeks + Gamers.

Star Wars Rebels returns for its final run of episodes, delivering an expertly handled and emotional farewell for a main character. 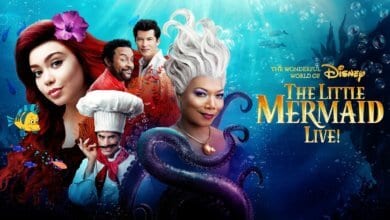 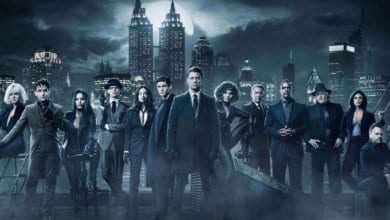 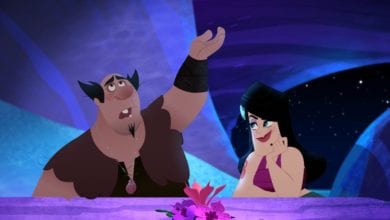 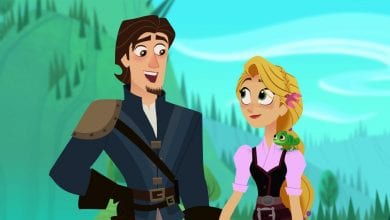