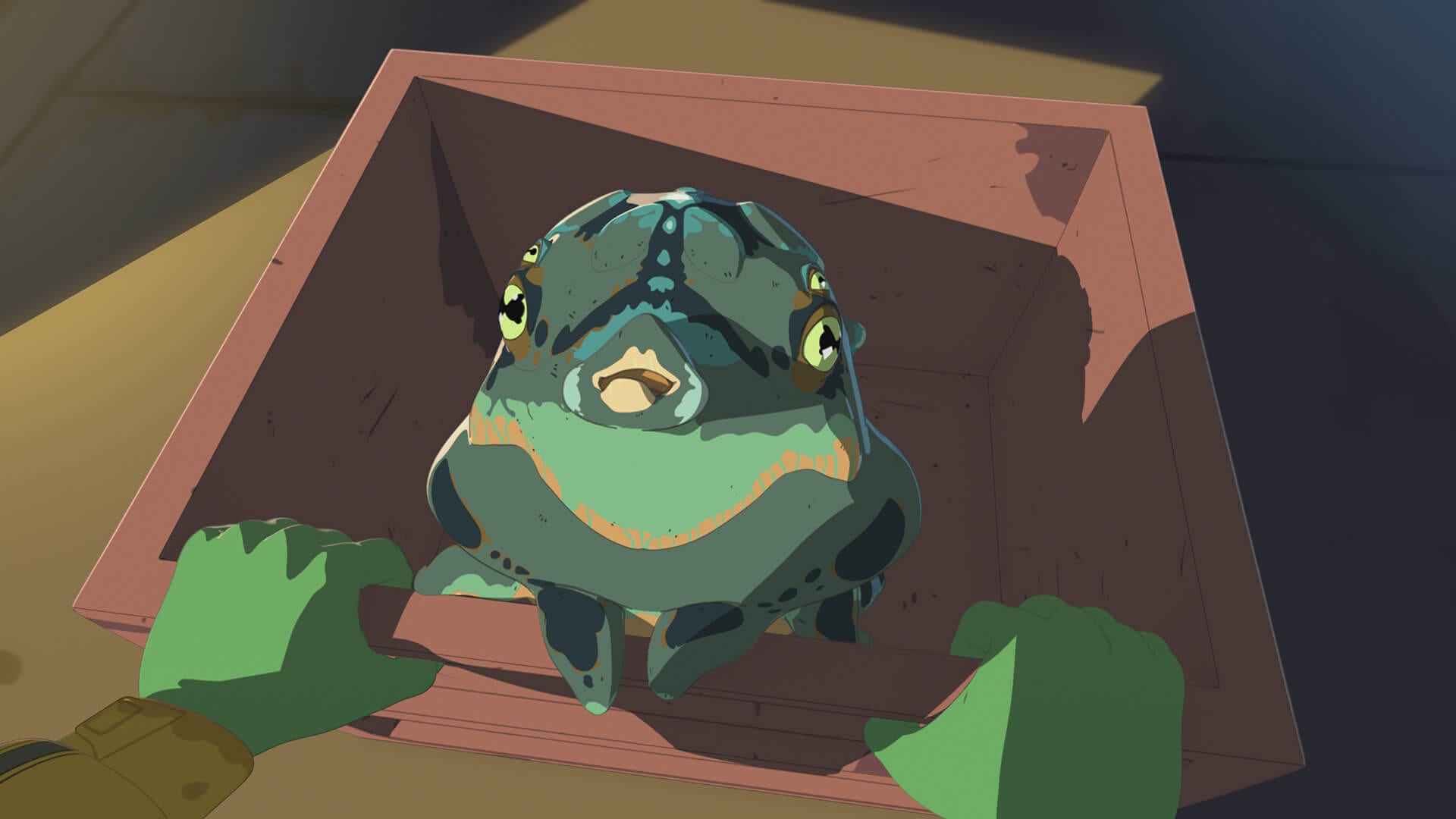 In “Bibo,” Synara brings in a scavenged ship. On it, they find an aquatic creature that Neeku decides to adopt and name Bibo. Within the Colossus, Bibo soon begins trying to eat everything, as well as stinking the place up. Synara asks Kaz to go on a salvaging run with her; there, she probes him regarding the pilots who saved her, and for once he’s tight-lipped. Bibo escapes, sending Neeku and Tam on a search for him. Thanks to a tip from Yeager, they find Bibo in the engineering shaft with Kel and Ayla from “The Children From Tehar.” Synara and Kaz get back to the platform but are stopped by guards before they can warn anyone about a huge sea creature they saw. Doza sends the Ace pilots out to defend the platform. Kel and Ayla warn Tam and Neeku that Bibo is a bad sign, and soon enough the sea creature shows up looking for him. People on the platform, including Tam, implore Neeku to give the creature what it wants, but he refuses to give Bibo up. However, Neeku eventually tells the pilots to stand down. He realizes that the creature isn’t a predator, but Bibo’s mother. He hands Bibo over, and the creature leaves.

In “Dangerous Business,” Kaz agreed to watch the store for Orca and Flix in exchange for parts. BB-8 accompanies him, and soon patrons begin arriving and supplying Kaz with orders. His first transaction is a little bumpy, but it turns out OK. His second customer, Taroj, has a very large order and requests that it be brought to his storage locker. Kaz complies, resulting in the customer locking him in the locker. Kaz contacts BB-8 asking for help, but Taroj tells the deck guard to destroy his storage unit’s contents, including Kaz. He soon starts improvising, searching the unit for anything he can use to escape. He finds a blowtorch, but just as he opens the door, the unit is dropped in the ocean. Nonetheless, he manages to cling to the inside of the building, saving himself. He sees Taroj and decides to follow him and reclaim a device he stole from the shop. He discovers that Taroj is working with the Empire; he and a group of stormtroopers go into a ship and fly away with the device and Kaz in tow. Bitey, the store’s pet/mascot, tears into the ship’s wiring, bringing it down. Bitey and Kaz escape, and when they get back to the store, everything’s a huge mess. Kaz tries to clean up, but Flix and Orca arrive before he gets the chance. They end up happy that he destroyed the ship rather than letting Taroj escape with the tool, which proves to be a drill. Flix and Orca inform Kaz that he’ll have to come back and work tomorrow to pay for the destroyed drill.

“Bibo” isn’t the worst Resistance episode, regardless of how little that means. That being said, it is an excellent example of several aspects that make this a bad show. From the moment Neeku finds Bibo and pledges his loyalty to him, it’s patently obvious that he won’t be able to keep Bibo as a pet. They try to make Neeku uncharacteristically expressive in this scene, with him even saying how joyous he feels. However, neither Josh Brenner’s vocals nor the show’s feeble visuals convey this heightened emotional state. This just isn’t a fun character to watch; he’s not interesting, and you don’t want to root for him. His devotion to Bibo also comes out of nowhere; sure, Neeku tells the gang that as a child he had a similar animal as a pet. But to react this way upon first sight is just strange. If they want to show Neeku this far outside of his normal behavior, I just feel like we need more explanation than him seeing an animal and thinking it’s cute. And back to the predictability of their friendship not lasting, it was also super obvious that the big creature was Bibo’s mom. If anything, I was shocked at how long it took the characters to come to this conclusion. Aside from being huge and having tentacles, she looks just like Bibo, and if she was trying to eat him, why would he be reaching for her? Stupid. The writing on this show is so insipid. This seems to have been done in an attempt to keep the audience guessing, but it really just serves to make the principal characters look like hapless idiots.

Kaz is just as stupid as ever in both “Bibo” and “Dangerous Business.” He continues to blindly trust Synara, apparently because she’s a pretty girl. He doesn’t question her sneaking around and seems fine with her obsessively questioning him about her rescue. His willingness to work at the shop for a whole day without knowing how anything works is also telling; seriously, he didn’t even ask the guys for some light training before being put totally in charge for a day? Thankfully Tam isn’t in these episodes much, but whenever she is, it’s a chore putting up with her attitude. Yeager is also used sparingly, and I hated the scene where Neeku and Tam guilt him into letting Bibo stay. Keeping a pet on the premises of your workplace isn’t a normal or reasonable request; why do they act like Yeager owes this to Neeku? And Yeager ultimately agrees and starts trying to help them! What the heck? I know this is just a TV show, but in no way is this the appropriate response to Neeku and Tam’s childish and entitled behavior. I’m also not sure why they brought back the kids from Tehar for this episode; I actually forgot about these characters and had no desire to see them again.

The action scenes in “Dangerous Business” all just kind of bleed together. There’s a lot of running around and chasing Taroj and the drill, and it’s all very generic. This would be easier to forgive if it was possible to care about these characters. Honestly, I don’t know why they didn’t just cancel Resistance instead of putting it on hiatus. Overall, both “Bibo” and “Dangerous Business” are pretty bad. They’re not the show’s worst episodes, but they’re also filled with boring characters, ugly visuals, and stupid plot choices. Resistance has been terrible from the beginning, and any hope that it would improve post-winter break has been destroyed.

Overall, both “Bibo” and “Dangerous Business” are pretty bad. They're not the show's worst episodes, but they're also filled with boring characters, ugly visuals, and stupid plot choices. Resistance has been terrible from the beginning, and any hope that it would improve post-winter break has been destroyed.