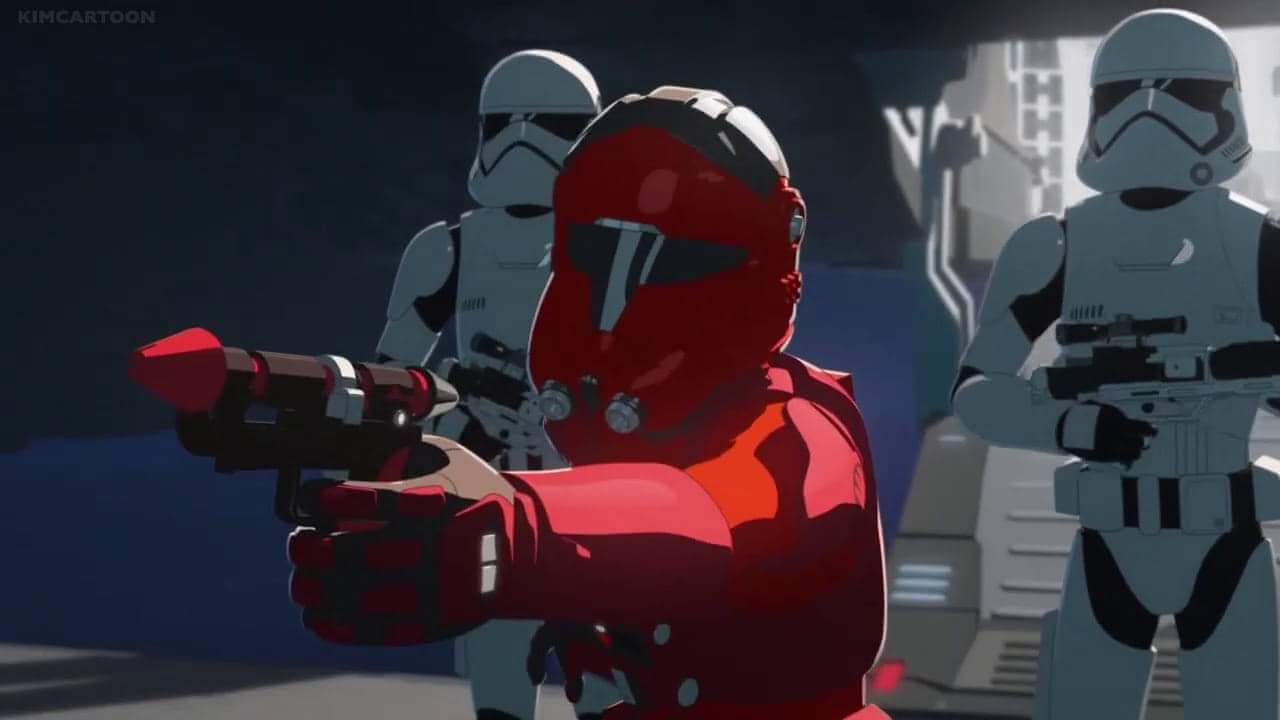 In “The Doza Dilemma,” the First Order’s pirates on the Colossus demand more pay in exchange for getting Doza’s cooperation. The First Order agent agrees and tells them they’ll have to steal something close to Doza, something precious to him. Meanwhile, Synara rendezvous with her contact within the pirates, Kregin. He charges her with preparing the cargo for the mission from the First Order. She has mixed feelings and might not be ready to leave the Colossus. Synara heads to Aunt Z’s, where she runs into Kaz, Tam and Torra. After a bit, Torra invites them to her room in the tower, exactly where Synara is supposed to be for her mission. They play a game where they shoot at orbs with fake guns; Synara proves to be an expert shot, but Kaz misses every orb. Synara says she has to go because she has work, and Torra gives her an access code to visit any time. Torra tries to talk to her father and tell him to increase security per Synara’s advice, but he shoos her away so he can continue a meeting with the First Order.

Meanwhile, Tam and Neeku head out to get some food while Kaz declines to join; Tam comments that he’d do anything to visit Synara. However, once he’s out on the platform, Kaz sees her with her fellow pirates. Believing Synara to be in danger, he decides to follow them. Synara tries to dissuade her comrades from completing their mission, asking what could be so important; they tell her that they intend to kidnap Torra. Synara tries to find help, and she runs into Kaz. She tells him that Torra was kidnapped, but not how or by who. Kaz jumps in the Fireball and Synara radios Doza, advising him to dispatch the Ace Pilots. Kaz finds the pirates, but he can barely keep up. Matters are made worse when they fire at him, damaging his ship and slowing him down. Kaz recognizes the pirates as the ones he saw Synara with earlier. The First Order arrives and, rather than paying the pirates, fires on them. They take Torra and tell Doza they’re bringing her home. They leave some stormtroopers with Doza to bolster his security and encourage him to consider Commander Pyre’s offer. Meanwhile, Synara worries about her fate as Kaz shows up asking about the two “customers” he saw her with the night prior. She lies to his face, saying that she had a late night shipment to take care of.

“The Doza Dilemma” is the best episode of Star Wars Resistance so far. That’s not saying a whole lot, but it does bear mentioning. This is the first time I’ve felt like this show had any real stakes, as well as moral complexity of any kind. It was also kind of funny after the kid’s game when Torra exclaimed, “This is so wizard!” I don’t know why, but I absolutely lose it whenever prequel quotes are used in the animated shows. This still doesn’t beat Sabine’s comments about sand in Rebels, but it was a nice little chuckle nonetheless. The plot of “The Doza Dilemma” feels more impactful than prior episodes because there’s actually something at stake, and it’s something we can all understand. Torra’s relationship with her father hasn’t been built up that well in previous episodes, but the couple of scenes they share here have weight to them. Torra wants to tell her father about her day and her new friend Synara, and if he had taken the time to listen, he would know that his home’s security had been compromised. Everyone from Kaz to Doza and even Synara spends most of the episode trying to save Torra, and that feels like something that’s worth the time and energy. It was pretty obvious to me that Torra would be kidnapped as soon as the pirates were told they’d be stealing something important to Doza, but it didn’t feel as by-the-numbers as prior episodes. This is the first time I’ve found it possible to care about anyone on this show and be a little bit glad when things turn out OK.

Synara, another of the show’s lead females, also gets some of the spotlight in “The Doza Dilemma.” They’re finally making something of her duplicitous nature, and now that Kaz knows she’s been lying to him, I’m curious to see what happens with the two of them.  This is the first time she’s shown any remorse for her actions and involvement with pirates. Her concern for Torra is somewhat surprising to me; for a pirate, Synara is pretty soft, as her boss mentions. I like the idea of her appreciating Torra’s earlier kindness in welcoming her to join the others in the bar and later in her own home. I wonder when and how she’ll tell Kaz the truth, and how he’ll react. Despite his usually trusting nature, it might be hard for him to get over a betrayal like this.

All that being said, “The Doza Dilemma” still isn’t a great episode of anything. The facial expressions on the characters are pretty good, especially Synara, but this animation is still ugly and looks cheap. It also feels like they should do more to flesh out Commander Pyre and the First Order as a threat. We still don’t know much about them other than they’re evil and wear shiny armor. The music in “The Doza Dilemma” also isn’t as good as in prior episodes, and in fact, leaves no impact at all. Overall, this episode is extremely mediocre, with flashes of good ideas and character development, and that makes it better than all of the ones before it by default. I didn’t have a lot of fun with “The Doza Dilemma,” but I also didn’t spend the whole time groaning or propping my eyelids open. If the show were to improve this much again, it would be pretty good. I don’t know why it took most of the season to get here, but for the first time I’m intrigued and want to continue with Resistance.

Overall, this episode is extremely mediocre, with flashes of good ideas and character development, and that makes it better than all of the ones before it by default. I didn't have a lot of fun with “The Doza Dilemma,” but I also didn't spend the whole time groaning or propping my eyelids open.