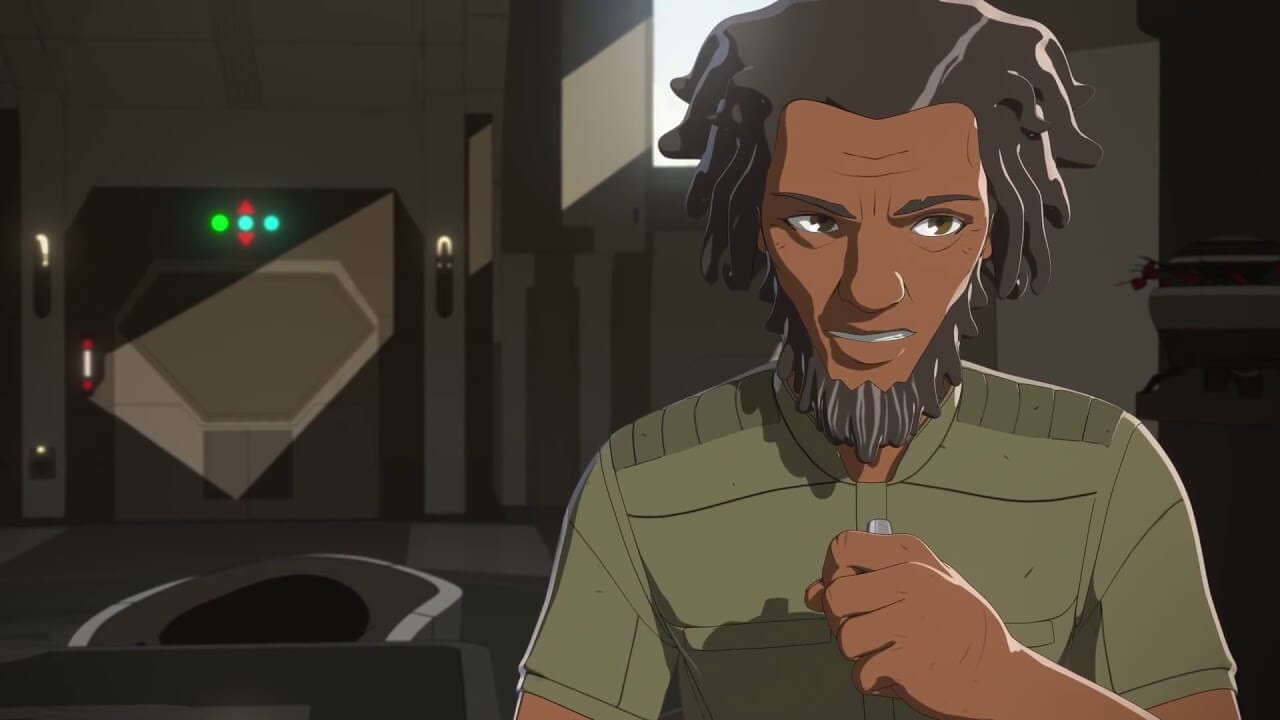 “No Escape, Part 2” opens where part 1 left off, with Kaz seeing his home planet destroyed. His entire family, all his friends from home, and the Galactic Senate are killed in the First Order’s attack. Torra pulls him away so they don’t get caught. They find Yeager and Captain Doza in their holding cell and release them. Yeager can tell something’s wrong, and Kaz tells him the bad news. Torra les her father know that Neeku is trying to get the Colossus into the air, to his reply that it hasn’t flown in 20 years. Two stormtroopers see that the cell door is open, but Torra and Kaz use it to lure them in, take their blasters, and knock them out. Meanwhile, Neeku and Kel are working on flushing out the water the Colossus took on to get airborne. The stormtroopers are in the corridors and, as such, Neeku is able to eject them from the station, along with the water. He then intercepts a transmission from Aunt Z.

Meanwhile, Agent Tierney tells Commander Pyre to call in reinforcements. She plans to take Tam back to the First Order base herself. Yeager and Doza overhear this conversation, but Doza says they can’t take them alone and free Tam. However, Yeager contacts Kaz and tells him about Tam. He tells him not to let her be taken. Just as Tam and Tierney are about to board the ship to leave, Kaz and Yeager try to convince her of the First Order’s evil. However, she doesn’t trust them, and they’ve unwittingly cornered themselves. Kaz radios to Neeku to get going. The Colossus lifts into the air, startling Tierney and the troopers. Yeager tries one more time to level with Tam, but she chooses to go with Agent Tierney. Doza releases the Ace Pilots from their holding cells. Aunt Z and Hype show up just in time to destroy First Order ships firing on Yeager and Kaz. Kaz, Yeager, and all the pilots take flight and fight TIE fighters just as a pirate ship arrives, to Kaz’s dismay, but he’s pleasantly surprised to see Synara at the helm. Kaz transmits coordinates to the jump point to Neeku, who protests that it’s an uninhabited planet. Nonetheless, they make the jump to hyperspace and Kaz reveals that they’re going to Tekar, home of the Resistance. However, Neeku states that he didn’t enter quite all of the coordinates; it’s a total crapshoot whether they’ll end up near Tekar.

Much like last week’s Part 1, “No Escape, Part 2” is a race from beginning to end. They’ve mastered the ability to fit plenty of plot, action, and even pathos into 22 minutes while maintaining a balanced feel. I do have a couple of nitpicks here, mostly regarding Tam; I mostly like what they’re doing with her, but I’d have preferred to see maybe one or two more short scenes with her mulling it over. Additionally, this episode would have an added bit of drama at the very end if we saw Tam with the First Order after Kaz’s final remark that most of them are together in the Colossus. However, they are given a very limited runtime to work with, and I can’t think of anything they really could have cut to make room, save a couple of unfunny lines from Neeku. I love the scene where Hosnian Prime is blown up. We saw part of this sequence last week, but it’s every bit as effective to begin the season finale with it. General Hux’s speech is chilling, but at times his delivery seems a tad forced or overdone. They did get Domhnall Gleeson to reprise his role from the sequel films, and while I dislike those movies, I don’t recall having any particular issues with his portrayal. Perhaps he’s just not used to doing voice work for animation. In any case, it’s just a few moments at the very beginning, and it’s mostly fine. Kaz’s reaction to the attack completely sells the scene regardless, and this is one of the first times I’ve really felt for this character, the other being when he discovered that Synara had been lying to him. Yeager also gets some great moments with Tam in “No Escape, Part 2,” and it resonated with me when she said he was like her father. You can see the hurt in his face when she takes Tierney’s hand and boards her ship. Suzie McGrath also does a particularly good job voicing Tam this week; she gets a lot of frustration and conflicted emotions into the performance.

As I briefly mentioned, Neeku is really unfunny in “No Escape, Part 2.” Throughout the whole season, they’ve treated Neeku as the go-to comic relief character, but he just doesn’t have a very entertaining personality. He takes everything literally, and the show frequently tries to utilize this for comedy, but it rarely works and, overall, it doesn’t seem worth it. Even though the series has improved drastically over the last few episodes, the comedy remains juvenile and stilted. This, along with the visuals, leaves room for major improvement in season two. Even though the texture and overall look of the animation haven’t improved, it’s worth noting that the way they frame the characters has. In the beginning, the show’s shots just bled together into a big, ugly mess. However, pretty much every episode since “The Doza Dilemma” has had memorable, dramatic-looking shots and tremendously improved character animation. Michael Tavera’s musical score is at its best in “No Escape, Part 2,” which is fitting for a season finale. The track that plays as the Colossus ascends is beautiful, and I’m also partial to the one that plays over the crew looking out into hyperspace.

“No Escape Part 2” is a fitting end to Resistance’s first season, tying up some loose ends but leaving others for future seasons. Kaz’s family is gone, Tam is confused and isolated with the First Order, and the Colossus is racing toward an unknown destination. I really, really didn’t think I’d be saying this, but I’m genuinely interested in seeing where the story goes in future seasons. I would say that this season has been shaky overall, as there were more bad or mediocre episodes than good ones, and it’s hard to say if I’d recommend it. If you’re really patient, you might want to watch the whole season, but if you just want to get to the good stuff, maybe start with episode 14, “The Doza Dilemma.” This show isn’t heavily serialized like Avatar: The Last Airbender, so it would be relatively easy to pick up the basic plot at this point.

“No Escape Part 2” is a fitting end to Resistance’s first season, tying up some loose ends but leaving others for future seasons. Kaz’s family is gone, Tam is confused and isolated with the First Order, and the Colossus is racing toward an unknown destination. I really, really didn’t think I’d be saying this, but I’m genuinely interested in seeing where the story goes in future seasons.