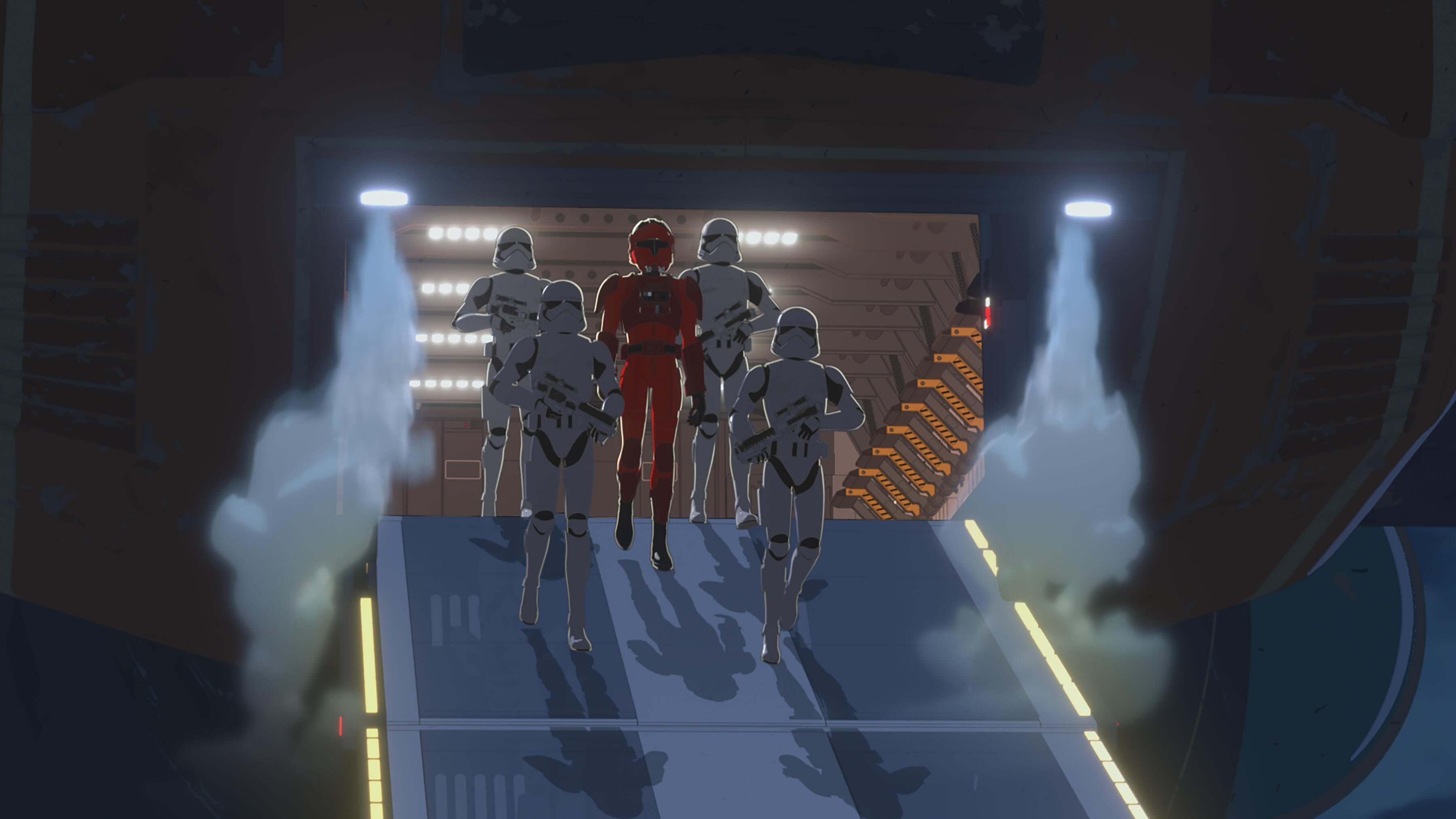 In “The High Tower,” Tam berates Kaz for falling into Bucket. Neeku has created new and improved comm links so he can talk to Kaz no matter how far apart they are. An announcement arrives over the radio waves: there’s a power shortage, and everyone is asked to use as little as possible while it’s rationed. The three mechanics decide to go to Aunt Z’s for drinks. Ace pilot Hype arrives, and Tam advises Kaz that he’s a narcissist who doesn’t care about his friends. Regardless, Kaz tries to befriend the pilot. Hype mentions that the First Order will be having a meeting in a nearby tower and Kaz begins scheming to get in there. That night, the three mechanics see First Order troops disembarking, and Neeku asks them why they’re there; luckily they just keep walking. Hype gets the three special access to the pilot’s lounge. Kaz asks Hype what’s going on with the First Order, but he informs him that Doza deals with them. Hype makes a comment about Tam needing a real ship to become an ace pilot and she storms off; Kaz sneaks off and uses the comm link to spy on the First Order meeting. Inside his office, Doza tells the stormtroopers that it’ll take more than a shipment of fuel to buy his cooperation. They say only that the future will be dim until he does as they say and grants the First Order access to the port. The stormtroopers spot Kaz as they leave the office, and he seeks refuge in Torra’s room. She tells him that he must have mistaken her kindness for attraction, but when the troopers come knocking she pushes him out of the window. Kaz tries to sneak around the edge of the ship, jumping and crouching like a video game character. Seeing this, the people at Aunt Z’s begin placing bets. Kaz makes it back safely. When the troopers question Doza about Kaz being in Torra’s room, both insist that it was just a friend visiting and he tells them to leave. Tam tells Kaz to get back to work and he gives Neeku his comm link back. Meanwhile, Doza thoughtfully watches footage of Kaz escaping.

Each time I put on Star Wars Resistance, I tell myself to try to have an open mind. I remind myself how much I love The Clone Wars and Rebels, and that Resistance is their successor. However, I usually find myself torn between bored and incredulous at what is unfolding on my TV screen. My husband often comments that it’s bad and really stupid, and I feel no temptation to defend the series or any part of its production. I don’t like to criticize every aspect of something because, much like praising every aspect, it feels cheap and easy. I don’t want to write something off as horrible or hail it as brilliant at the get-go, but after just a few episodes, I feel confident that Resistance has yet to display any redeeming qualities, be they technical, ideological or conceptual. 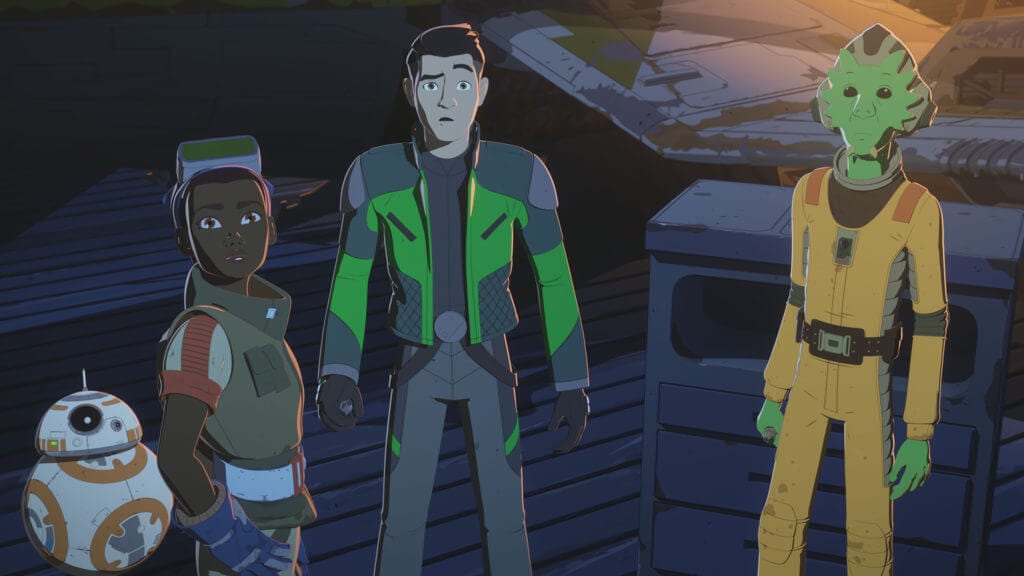 I don’t want to harp on the animation in “The High Tower” too much since I said so much about it last time, but in case you’re wondering, it’s still ugly and still creates this strange, gooey-looking texture on everything from characters’ skin to fabric to glass. In terms of music, this series only has a brief blast of sound with the Resistance logo as its theme song. In fairness, I will admit that Rebels and The Clone Wars did the same thing, and I always wondered why. Unlike those series, “The High Tower” doesn’t have any impressive score pieces or leitmotifs. The voice work here isn’t horrible or distractingly bad by any stretch, but the actors aren’t given much to work with when it comes to the boring scripts and paper-thin characters.

And, honestly, this is my biggest problem with Resistance. I can get past cheap animation if the story and characters suck me in, but Kazuta is annoying. Unlike Ezra and Ahsoka, this guy at least appears to be an adult, so his behavior is less excusable. He was also trusted by Poe with a secret mission; why is he always bumbling around like an idiot and acting like a toddler, fascinated with every shiny object or seemingly impressive person he encounters? It seems like they wanted to have an adult (or, at least, late teens) character to make his recruitment by Poe believable, but concluded that such a character would be boring or less relatable to the ankle-biters. That being said, one has to wonder why Disney airs this series at 10:00 PM on a school night if they truly want to rope in children and families. It’s also worthy of note that Rebels was already pretty child-friendly, and they still managed to deal with pathos and difficult topics like the effect the war was having on the planet of Lothal. I don’t know why they would feel the need to make their next series even more sanitized and dumbed down; Rebels seemed to me like a pretty good “happy medium” that explored the force and the war enough for fans while being tame enough for little kids. 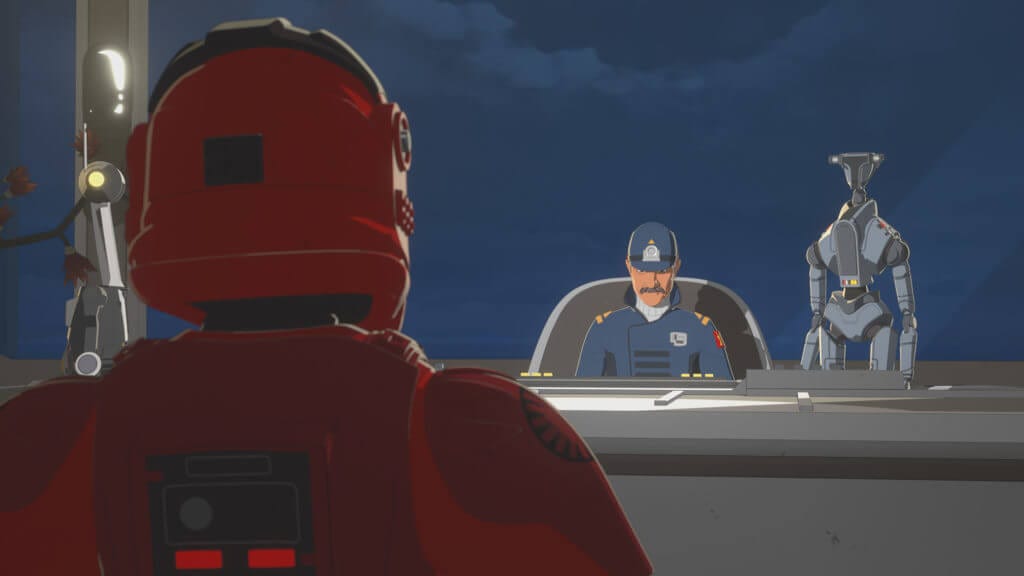 Jarek Yeager is completely absent in “The High Tower,” which, I guess, makes enough sense, since the mechanics aren’t shown working this time around. While I’m not in love with this character or anything, his backstory is the only thing I’ve found even slightly intriguing over the plot of now five episodes. I think it’s really sad that I can say that only one character even remotely interests me, and it’s one who will apparently be recurring as opposed to one of the leads. Tam seems to exist solely to bicker with Kaz and pine for the possibility of a new life. The second thing could be interesting if we really knew anything about Tam or if she was sympathetic at all, but I don’t consider not liking Kaz a personality trait; it’s just common sense. She does seem to think she’s superior to Kaz, and this is annoying in its own right. Neeku continues to be something of a nonentity in “The High Tower;” he takes everything literally and to the furthest possible confusion, so when Kaz asks why the First Order is there Neeku straight up asks them. This could be a funny moment, and Neeku could be used to a similar effect as Drax was in Guardians of the Galaxy. However, these sequences are not comedic in nature; they are just shown matter-of-factly, much like Neeku himself. The concept here isn’t bad, but the execution is bland and uninspired.

Torra arguably shows the most personality out of Kaz’s peers, though I didn’t find her putting off his perceived advances in “The High Tower” very funny either. The reveal that Torra’s father has been making bargains with the First Order isn’t much of a bombshell to drop; given that we previously didn’t know this character and he’s a government official, it’s new information, but not to any great shock. The scene where they negotiate isn’t very tense either; it seems obvious what will happen: they’ll banter back and forth, Kaz will overhear all of this and be OK. Now, it goes without saying that the hero of a series aimed at young children probably won’t die, especially this early. I’m not asking that the writers go George R. R. Martin on us; tension in moments like this comes from the audience having a bond with the characters who are in danger. In Avatar: The Last Airbender, even in life-threatening situations one could assume Aang would be returning next week. But these situations are terrifying for fans because you know this character and you so desperately want to see him succeed. I’m not saying the Resistance writers should consider killing someone or some other absurd plot twist; I just ask to be entertained. Seeing a character I don’t care about in a bind I know he’ll get out of within the next ten minutes doesn’t exactly get me on the edge of my seat. 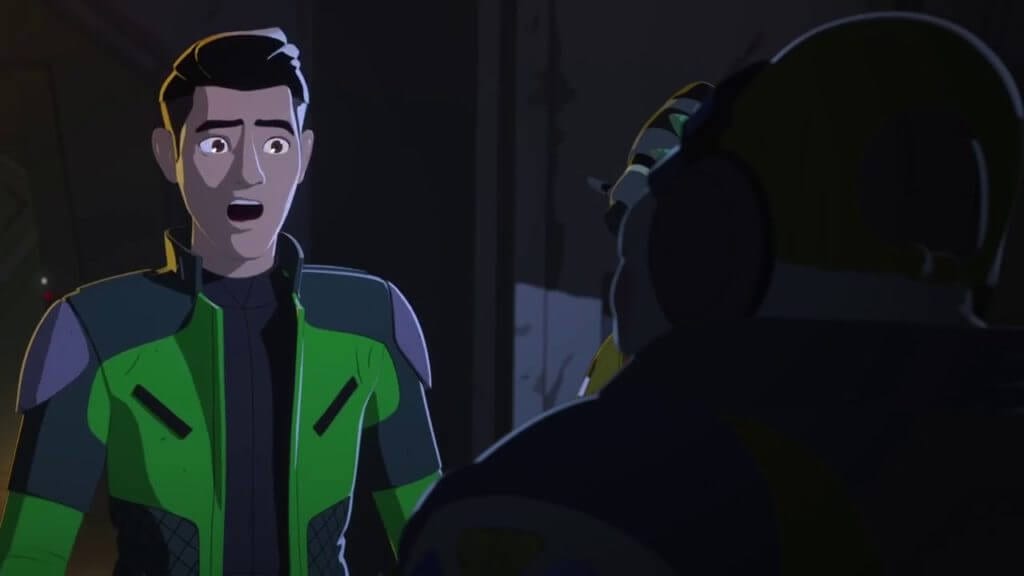 Overall, “The High Tower” is about the same level of quality as the previous three episodes of Resistance. In fact, it may be slightly weaker without the presence of Yeager. The animation, music, story, characters and just about every other facet of the series seem designed to entertain toddlers and nothing more. Some might argue that it’s okay to make a series just for kids, but in this case, it’s really not. This show was marketed to Star Wars fans, and fans of the previous animated Star Wars series, not just the usual Disney channel adherents. And again, this series airs at 10:00 PM on Sunday night; not ideal real estate for the Paw Patrol crowd. I dislike giving abysmally low scores, but I don’t see anything in Resistance that deserves defense or praise. Bad Star Wars content hardly surprises me anymore, but I have to say I miss looking forward to new episodes and having characters I loved and worried for.

“The High Tower” is about the same level of quality as the previous three episodes of Resistance. In fact, it may be slightly weaker without the presence of Yeager. The animation, music, story, characters and just about every other facet of the series seem designed to entertain toddlers and nothing more.