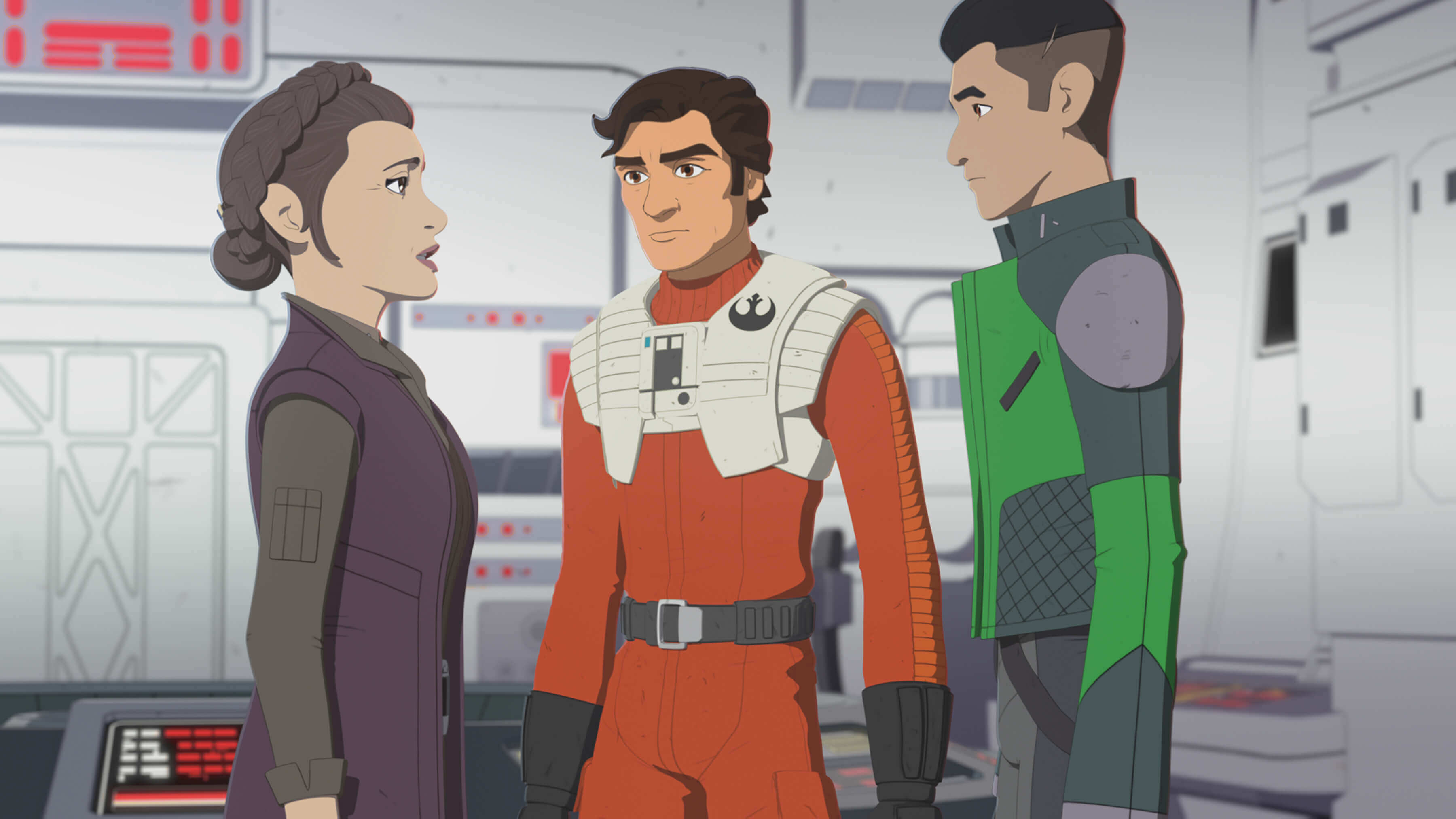 In “Station Theta Black,” Yeager has loaned Kaz the Fireball, angering Tam. Yeager reminds the feisty mechanic that he technically still owns the ship, to her reply that one of the stabilizers is still missing; she’s angry because she was in the process of fixing it. We cut to Kaz, who’s on his way to a rendezvous with Poe at the Resistance base. Unsurprisingly, he begins having trouble controlling the Fireball and Poe shows up just in time, rescuing Kazuta and the ship. Leia sends the two on a recon mission to a First Order installation called Station Theta Black. She reiterates twice that she doesn’t want Poe to engage any enemies while there, something to which he reluctantly agrees.

Poe and Kazuta maneuver their way through an asteroid field, pretending to be asteroids so as not to draw any attention. Once at the Station, Poe remarks that it’s the largest First Order installation he’s ever seen. Poe quickly fails Leia’s orders, shooting at a droid at the Station. Meanwhile, Captain Phasma tells one of her inferiors that the Resistance is at the station and she heads there to face them. Poe and Kazuta discover that the Station is scheduled for demolition and Kaz suggests that they leave, a sentiment BB-8 echoes; Poe seems hurt, saying that BB-8 is supposed to side with him. The First Order arrives just as Kaz learns that this Station is used for mining and processing; specifically, they’ve been using it for materials used to make blasters. Stormtroopers finally come face to face with Kaz and Poe, the latter of whom won’t put down his blaster. Poe and Kazuta slowly back away and bolt down a hallway, prompting the troopers to message Phasma regarding their whereabouts. CB-23 brings the ships around per Poe’s request, and the guys head out, albeit pursued by troopers in their own ships. 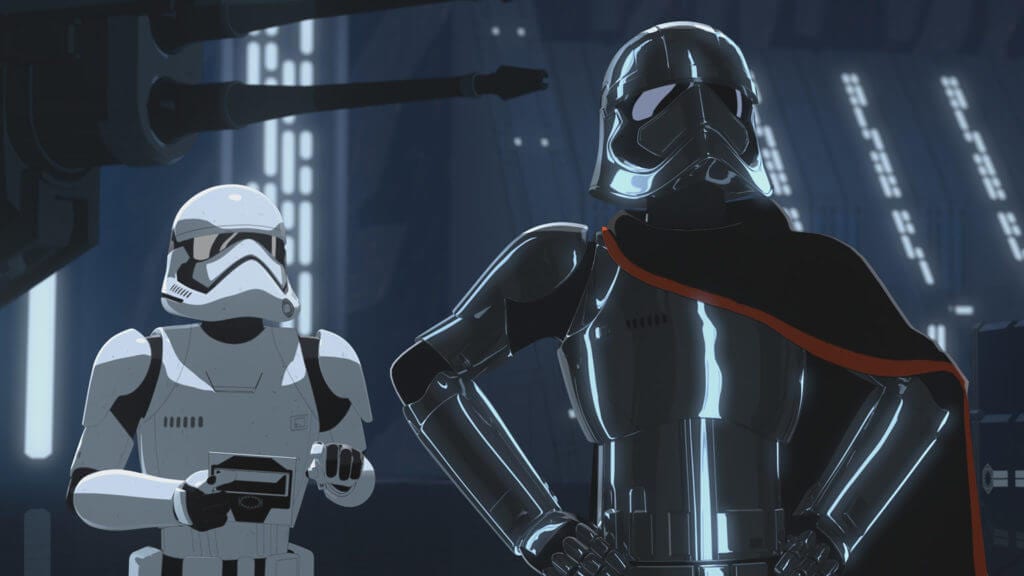 Phasma orders the troopers to turn back and blows up Station Theta Black; Kaz and Poe must outrun the explosion and keep their ships intact. At first, Poe believes that the unresponsive Kaz has been blown up as he can’t see or hear him, but he resurfaces, having used an asteroid as a shield. Back at base, they present Leia with the proof they’ve gathered, which Kaz fears won’t be enough to convince senators like his father.  Leia thanks them nonetheless, for their efforts and the evidence. Kazuta thanks her for the opportunity to help her Resistance, but she says that the Resistance belongs to everyone; she just guides it.

I want to start by talking about some good elements of “Station Theta Black.” When Poe and Kazuta arrive to get their orders from Leia in the beginning, Leia’s theme from the original trilogy plays in the background. I feel weird even praising the use of pre-existing music, but it was lovely and fit with the scene. I also thought that the opening scene with Yeager and Tam was effective; for once, Yeager was wrong, assuming that Tam was just being petty and wanting the Fireball for herself. Of course, she ends up being angry because the ship wasn’t space-safe yet, which is completely valid. I can’t help wondering if she is concerned about Kazuta at all, or just the ship.

And that’s about it for the episode’s redeeming qualities. BB-8 and CB-23 have gone from their initial mutual disliking to friendship and, apparently, love: we have no way of knowing any of this, as Resistance hasn’t shown the two together since “Signal From Sector Six,” but here they cozy up, and Poe refers to them as “love droids.” I found this to be a strange development; even in the aforementioned earlier episode, I thought things developed too quickly and out of nowhere. You may remember that they suddenly decided to be friends and we had no context as to how they came to this agreement; they beeped at each other for a solid 45 seconds, only for Poe to announce that the two are pals now. Now it seems that they’re a couple, pushing it further. I wasn’t even aware droids could be in love, unless you count the nonsense with Lando and L3-37 in Solo. Frankly, it disturbs me a little, but either way, the relationship between the two droids here has been so rushed and pushed to the side that you wonder why they included it at all. 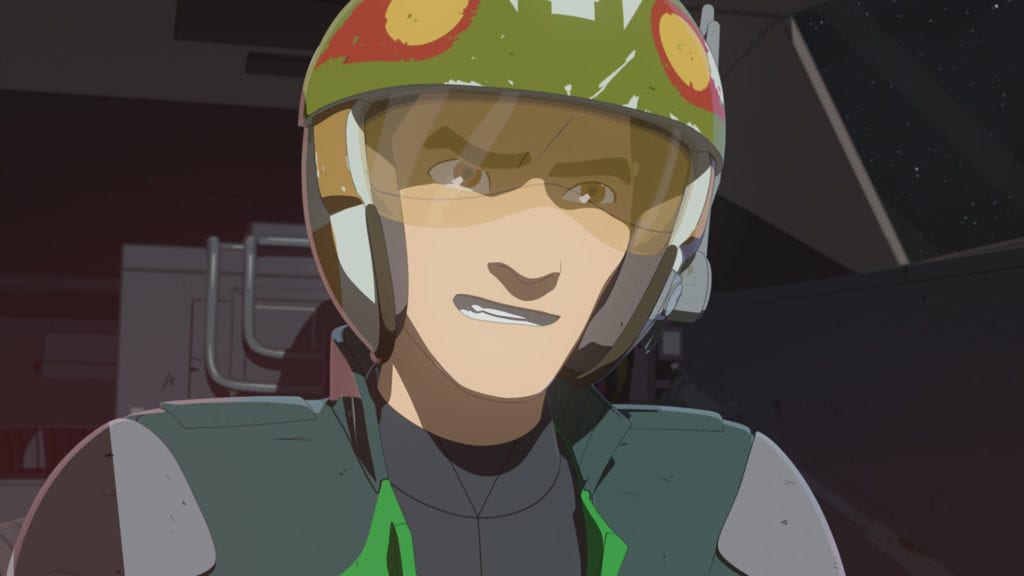 The scene where the two men slowly back away from the stormtroopers is so ridiculous I nearly laughed at the stupidity. Poe tells Kaz, out loud – where the troopers can surely hear – to slowly back away into the hall. Why on Earth would the troopers allow them to do so? They should and could have shot as soon as Poe announced the instructions. Stupid. Later in the episode, as Poe and Kaz fly away from the station, I also wondered why Phasma orders her men not to fire at the ships. Sure, she eventually tells them to blow up Station Theta Black, but why delay the process? This directly contributes to the men being able to escape. There’s also the sequence where Poe wants to stay and investigate despite the First Order being on the way, and Kazuta being the smart one for once and wanting to split once they have their intel. What’s Poe thinking here? Does he want more evidence? This is an interesting little role reversal, but it mainly serves to make Poe look like a moron. I also can’t help wondering about the conversation at the end. Leia and the two men agree that the Senate would never accept that the First Order presents a threat, then they say that those senators are profiting from the weapons produced by the First Order. How can they not believe something they already know about???

In short, “Station Theta Black” is bad. The opening scene is fairly solid, and I can’t complain about classic music from the original trilogy, but that’s all the episode has going for it. Last week’s episode, “Secrets and Holograms,” was pretty bad, but still considerably better than the earlier episodes. In that regard “Station Theta Black” is three or four steps back.

“Station Theta Black” is bad. The opening scene is fairly solid, and I can't complain about classic music from the original trilogy, but that's all the episode has going for it. Last week's episode, “Secrets and Holograms,” was pretty bad, but still considerably better than the earlier episodes. In that regard “Station Theta Black” is three or four steps back.