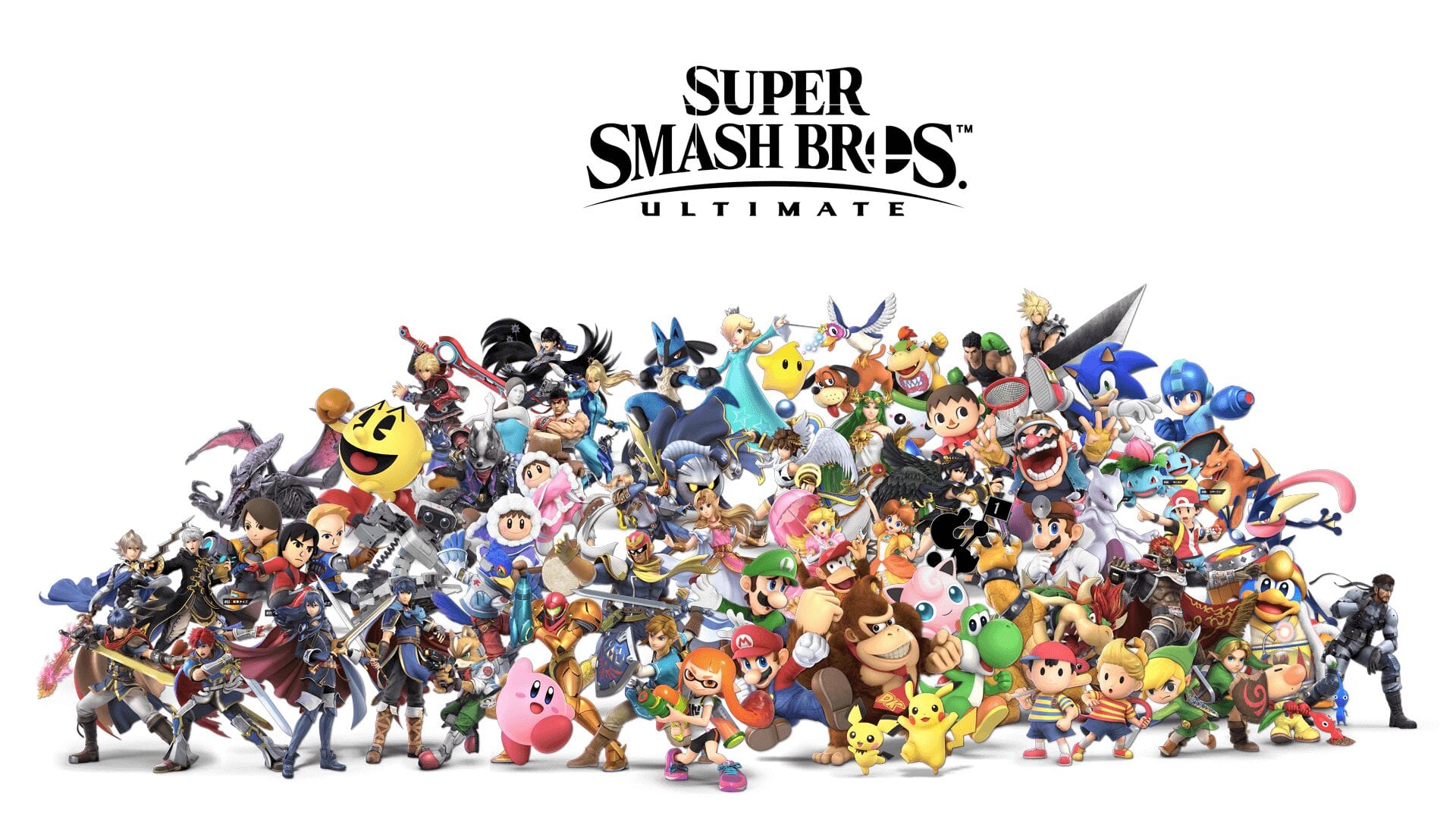 When the first Super Smash Bros. game released on the Nintendo 64, who could have expected that it would achieve the status of a global party game? Certainly not Masahiro Sakurai, but entry after entry, he brings us a melee of epic proportions that has brought gamers countless hours of enjoyment. The fifth console game in the franchise is no different. After diving into its many modes and dedicating an even greater number of hours, with varying degrees, to each one of them, I can confidently say that Super Smash Bros. Ultimate is nearly as fantastic as Melee. All of you fellow Smash Bros and Gals should understand the gravity of that statement.   Broadly speaking, the game is near perfect for what it is. From a sheer enjoyment perspective, I can seldom recall having as much fun with a party game, sans destroying friends in Mario Kart, as I have brawling it out with friends and co-workers on Super Smash Bros. Ultimate. The contributing factors to this nearly number the game’s massive roster. Let’s get to it!

Super Smash Bros. Ultimate brings with it a hitherto unseen casting of characters, both in complexity and number. Figures from a broad swath of franchises join in on the smash-up from as close to home as Link, Mario, and Pikachu, to those who most SSB fans could have only ever dreamed of, such as Cloud from Final Fantasy VII, Bayonetta, Simon Belmont, and soon Joker from Persona 5! When Sakurai announced that Super Smash Bros. Ultimate would bring with it every single character from the preceding entries along with additional new characters, fans flipped. Whenever you have a fighting or party game franchise that contains a large cast, it can be frustrating for fans when their favorites don’t always make it to subsequent entries. Sakurai and the team behind Super Smash Bros. Ultimate sought to circumvent that issue, and the result is a fantastic pool of playable fighters from which to choose. Now, friends can settle scores and arguments definitively without the excuse of, “Well, my best Smash character is really ‘X,’ but they’re not in this one!”

Taking a roster of such immense size (over 70) and balancing them in such a way that no one character is demonstrably superior to the rest is a challenging feat, and one could say it’s impossible, but Super Smash Bros. Ultimate comes darned close, with only a few characters who are underwhelmingly weak when compared to the others. In the fighting game genre, we would say that these characters received a “hard nerf.” Another issue that can come about from having so many fighters is running the risk of characters bleeding together and playing too similar to one another. To play devil’s advocate here, there is an entire classification of fighters in Smash Bros. that are called “Echo Fighters,” in reference to them largely being re-skins of other existing characters with a few minor tweaks. There might be one or two more echo fighters than is necessary, and one could certainly make an argument for the benefit of having instead made the majority of them more dissimilar to those from whom they were cloned. But this is not nearly enough of a detractor to write home about. The overwhelming majority of the characters are very different from one another, even and especially those from within the same franchise.

The large collections certainly don’t end with playable fighters, as the wealth of the series’ geography in the form of the many stages from across the franchise is also present. The crisp visuals offered by the Nintendo Switch bring older stages from the N64 and GameCube outings to life in living color! Playing some of my favorite newer characters on some of my favorite older stages is great fun, and it’s interesting to experience the mechanics of the former interacting with the latter. If you’re a fan of the games’ soundtracks, then an unparalleled track list is contained in Super Smash Bros. Ultimate for your audiophilic enjoyment. Additionally, any PokeManiacs jumping into the multiplayer melee with items turned on are likely to encounter a host of their favorite Pocket Monsters with varied effects (some great and others not so much), and all of them gorgeously rendered for the Switch’s hardware. That can be said of the game in its entirety; most of these characters have never been seen within their own games in such detail. 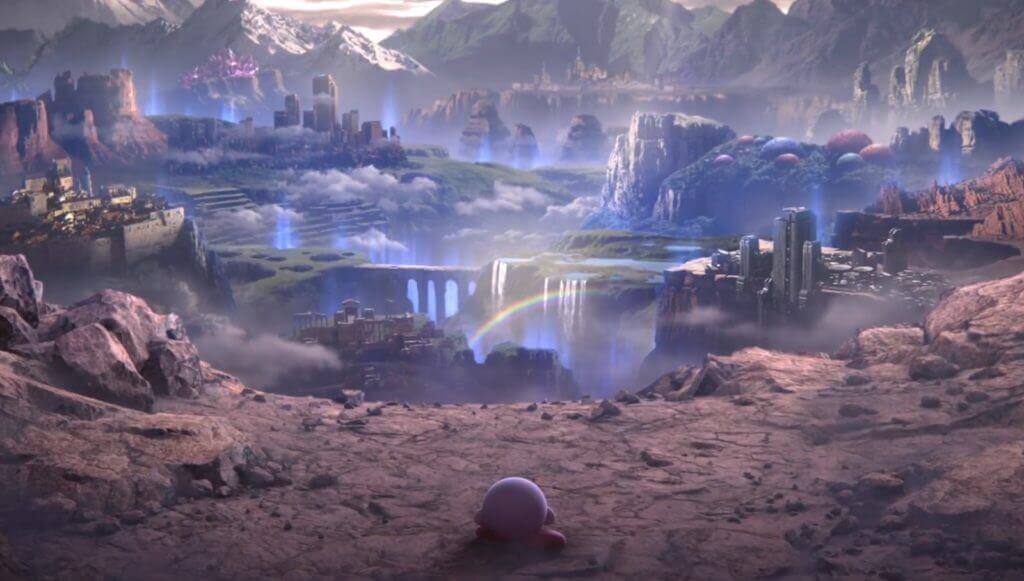 The game’s modes are varied, from the nostalgic Classic Mode and traditional multiplayer Smash Mode to the World of Light Adventure Mode. The usual modes that have remained a staple with each entry of the franchise return largely unchanged beyond increased customization and the ability to create multiple rule presets within the Smash Mode. Those are the modes that I have always spent the most time with and been most rewarded by. The largest disappointment for me in Super Smash Bros. Ultimate is the new Adventure Mode, World of Light. The premise for the loose story was initially really interesting to me, with all of the roster characters except for Kirby being captured in wispy tendrils of light and held captive as statues. The star warrior, Kirby, sets out to free the other characters on a game-board-esque overworld and must complete various challenges on his way towards the final boss. The challenges range from fights against giant fighters or hoard fights to something more complex such as fighting on a tiny stage with high winds blowing while your fighter is in a metal state and those winds are threatening to push you into the water from which you can’t escape. The game’s Spirit system adds further interest by introducing an almost role-playing aspect to the mode. Where I feel this mode fails is two-fold: firstly, it takes an insane amount of time to unlock all of the playable fighters via the World of Light mode, and while it absolutely should not be anyone’s preferred method of unlocking the fighters, it would have potentially been an enjoyable one regardless. But the gaps in between the fights to unlock the fighters are large and, for anyone who wants to prioritize completion of the roster, this is an immediate turn-off. The second issue is some of the challenges themselves. I consider myself a strong SSB player, as I’ve been playing since the series’ infancy, and therefore I love and appreciate a good challenge, but many of the challenges are flat-out not enjoyable.

Fans of Super Smash Bros. Brawl on the Wii and the Wii U’s own Super Smash Bros. were perpetually frustrated with Nintendo’s… unstable online play. Nintendo released their Switch Online paid service just in time for the tandem release of Super Smash Bros. Ultimate. The question is, can we truly tell? In short, not really. I have spent many hours playing online and, with a very strong internet connection (including a LAN adapter for my Switch) I have consistently experienced major lag spikes during matches and dropped connections from the servers. This needs to be priority numero uno for the Smash Team, as online play competency is something Nintendo can no longer ignore. It’s almost 2019 at the time of this article’s writing; it’s time to join the rest of the world, guys. Additionally, though less important to me, the ranking system for online players is a bit strange, and I feel a more traditional leveling system would benefit players more, and you could have had Spirits and the like unlocked upon reaching certain milestone levels, but that’s neither here nor there at this point. 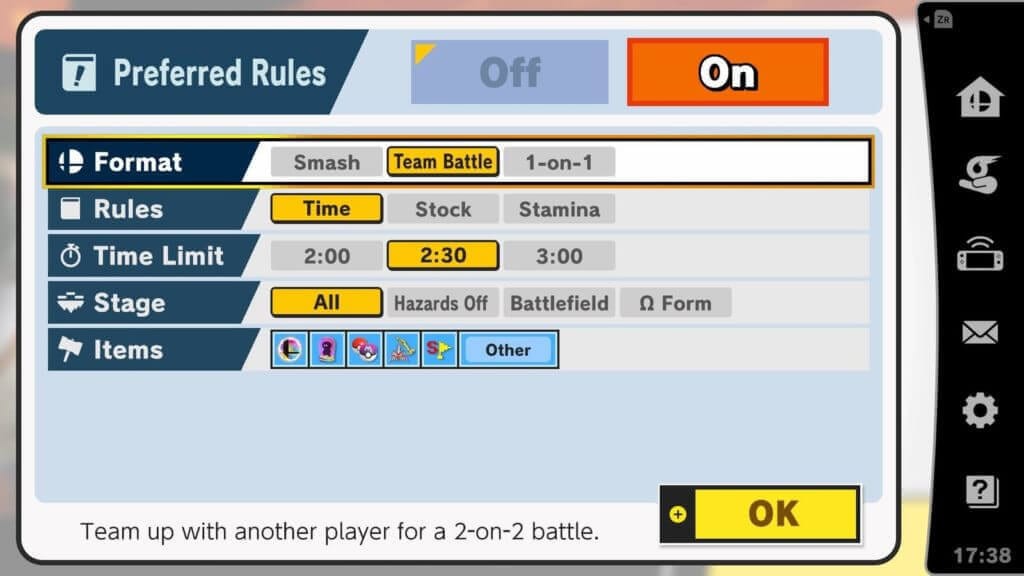 From an overall gameplay perspective, Super Smash Bros. Ultimate is a joy to play. Where it falls short, its strengths quickly pick it back up and carry it to the top of the Switch’s sales charts, as well as the lists of players’ favorite go-to party titles. The promise of more playable fighters and corresponding stages to go along with them in the coming months via the Fighter Pass is sure to have players guessing with fingers crossed who will join the already obelisk-sized roster. We already know who two new fighters will be: the Piranha Plant and Joker from Persona 5 (who I am particularly excited for, as that game is one of my favorite JRPG outings ever), and there’s no shortage of forums out there with fans theorizing at who might be the next big surprise. Super Smash Bros. Ultimate is a game that is deceptive in its complexity; it is easy to learn if you pace yourself, and difficult to master, but it is above all a game that is great fun for all ages.

Classic Smash Bros. gameplay with an unparalleled roster of fighters and a world's worth of stages make Ultimate the perfect party brawler for friends and family alike. If Nintendo can join the 21st century and get their online play straightened out, this game will ultimately be a Switch bestseller for the entirety of the Switch's lifecycle.