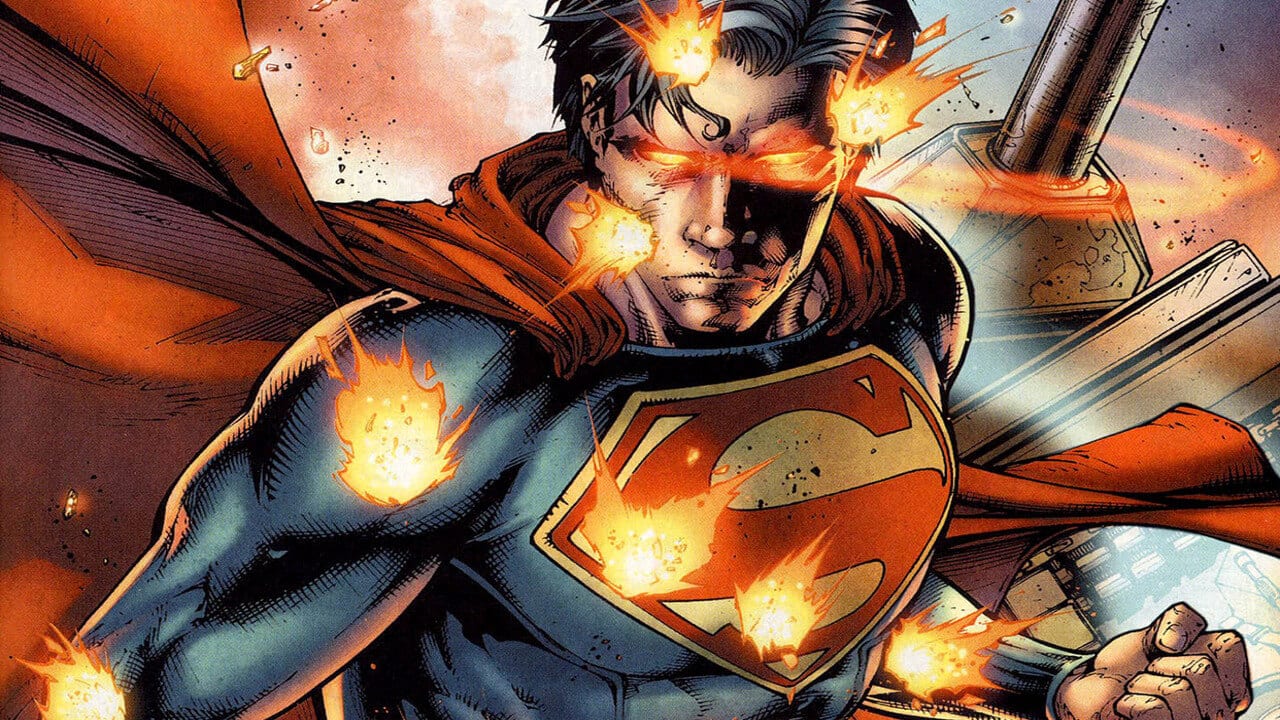 Superman: Earth One – Volume 2 is a book I had looked forward to for a long time. After the work that was done in the previous volume, the sky seemed to be the limit for where J. Michael Straczynski could take Superman next. 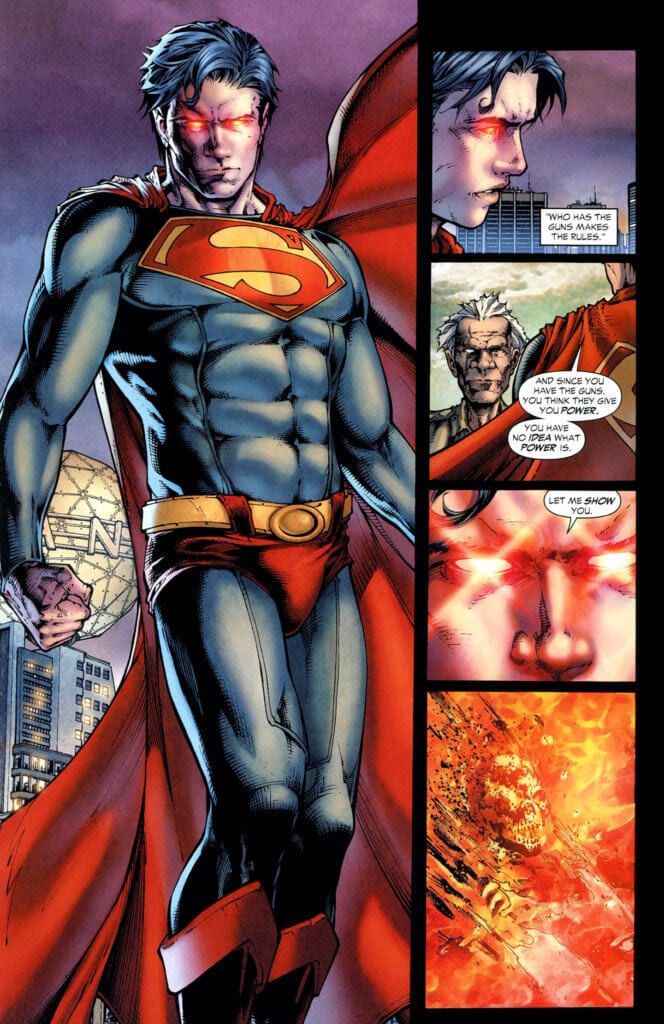 The story starts with a lot of promise, with Clark Kent having settled into his new life in Metropolis; at the same time, however, he doesn’t appear settled at all, still trying to reconcile himself with not only his two identities but also with his powers. All the while, a new villain is rising who is apparently supposed to test Superman, but it seems more like a stop-gap than a true obstacle for the Blue Boy Scout. This is compounded by the fact that the book reminds me of some of the best elements in Batman v. Superman utilized in all the worst ways, watering it down to its thinnest and most predictable version. There’s something in here that works, yet it’s executed in such a way that forces the story far afield from its premise, which to me seems to be thus: If the first volume was about Clark discovering what it means to be super, then Superman: Earth One – Volume 2 is about what it means to be human. Unfortunately, both of these ideas are depicted poorly here, particularly the latter. While I understand what Straczynski was attempting to do here, I don’t think it comes across very well. Yes, the idea of vulnerability is an essential concept for Clark to understand, but it just feels like a weak attempt to draw a parallel to Clark’s own struggle and be shocking for the sake of being shocking. The edict set out by the previous book was to create a modern Superman, and frankly, I just don’t see any of this as modern; it only devolves into being different for the sake of being different. While some of these things allow Clark to identify with the people, he’s protecting on a human level, the moments of inspiration we saw in the previous installment are few and far between. I wish that ingenuity were on display in Superman: Earth One – Volume 2. Its absence permeates the story and doesn’t bode well for the time that Clark spends in the suit.

I understand the need to depict Superman dealing with 21st-century issues, but it feels hollow here. It’s an important idea to cover with Superman, but going all the way back to the much-maligned Superman IV: The Quest for Peace (and depending on who you ask, Man of Steel), whenever there’s been an attempt to try to figure out what Superman should do in the real world, it tends to backfire, and that’s no less true of Superman: Earth One – Volume 2. When I read the scenes that gave way to this angle, I looked at it with a jaundiced eye and instantly felt it was the wrong call. This is one of the many instances of this story where I felt this plot angle was more or less a speed bump to the next chapter, thus leaving the story feeling less than fulfilling. This was equally true for the villain of the piece, Parasite. Aside from a nice vision of STAR Labs (which we would have gotten more of had Straczynski’s Flash: Earth One come to fruition), Parasite just seems to exist to give a particular character’s actions more credence in the third installment. Despite an attempt to give Parasite some depth, it seems to have more to do with the ramifications of his actions than the character himself. Those ramifications are twofold: the reactions of the world’s governments, particularly from General Lee, and Superman’s reactions as they relate to how Clark’s education of what his ship can do. This is an interesting take on the Fortress of Solitude and sets it apart from past iterations like Superman: The Movie and Smallville. I remember watching Kevin Smith talk about why Superman wouldn’t need guards in the Fortress of Solitude, and while I agree with him for the most part, I like how the ship’s computer serves as a sort of substitute for security. After all, short of another Kryptonian infiltrating the place, there’s really nothing anybody can do to upset this sanctuary. Despite being little more than a plot device in the book, I thought this was one of the few saving graces of this story. 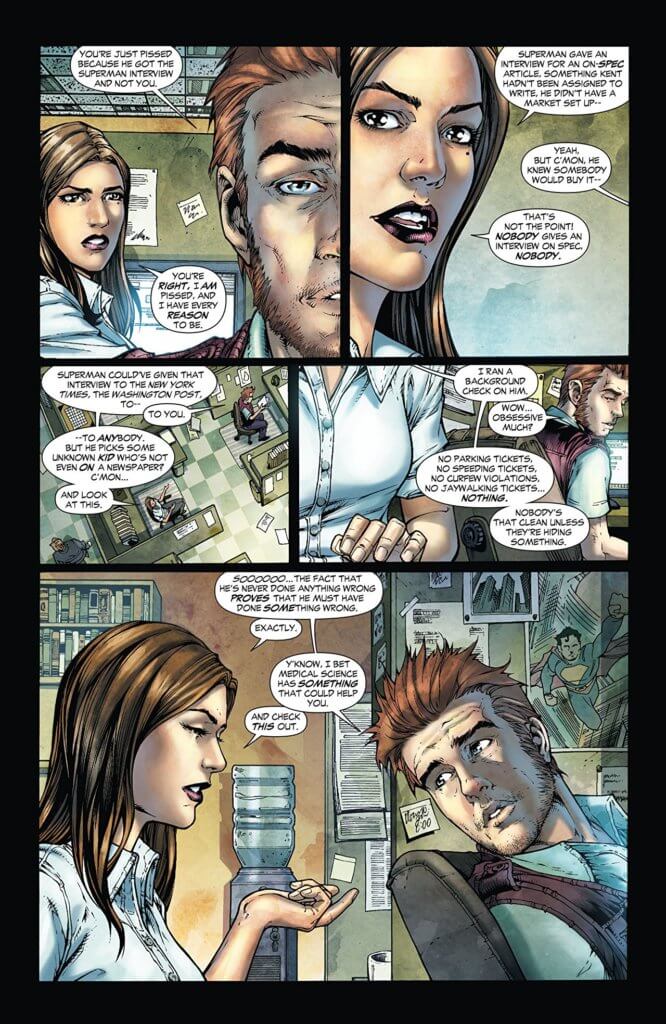 However, the biggest highlight in Superman: Earth One – Volume 2 has to be Lois Lane’s arc. While at first glance it is similar to her arc in Man of Steel, here it is much more in keeping with the Lois character and in many ways adds to the Clark established in the previous volume. Rather than telling us how great Lois is at her job, Straczynski shows us and actually makes us understand why she feels the way she does, even if we don’t necessarily agree with her. All too often, Lois is portrayed as little more than a love interest and someone Superman constantly saves, so I was glad to see that Lois was largely treated far better here and would frequently bring to mind the tenacity Erica Durance displayed when she inhabited the role on Smallville. I hope this arc continues during part 3, which appears to be set up in the final pages of the book.

Writer J. Michael Straczynski clearly has a vision for the Man of Steel, but can’t seem to find the balance between what Superman could do and what he should do. Superman books are supposed to be about hope, optimism, and above all, fun. Artist Shane Davis does a great job, but can’t elevate a subpar plot (albeit with some occasionally excellent dialogue) with his signature style.

Despite a great arc for Lois and some good use of the Fortress of Solitude, Superman: Earth One – Volume 2 can’t seem to rise above Straczynski’s poor villain and plot. While Davis’s art eases some problems, I really hope volume 3 is better because, while this Superman needs to learn how to be human, it’s equally important to hold on to what makes him super.

Despite a great arc for Lois and some good use of the Fortress of Solitude, Superman: Earth One Volume 2 can’t seem to rise above Straczynski’s poor villain and plot. While Davis’s art eases some problems, I really hope volume 3 is better because, while this Superman needs to learn how to be human, it’s equally important to hold on to what makes him super.