"It's time for you to save the world, Clark." 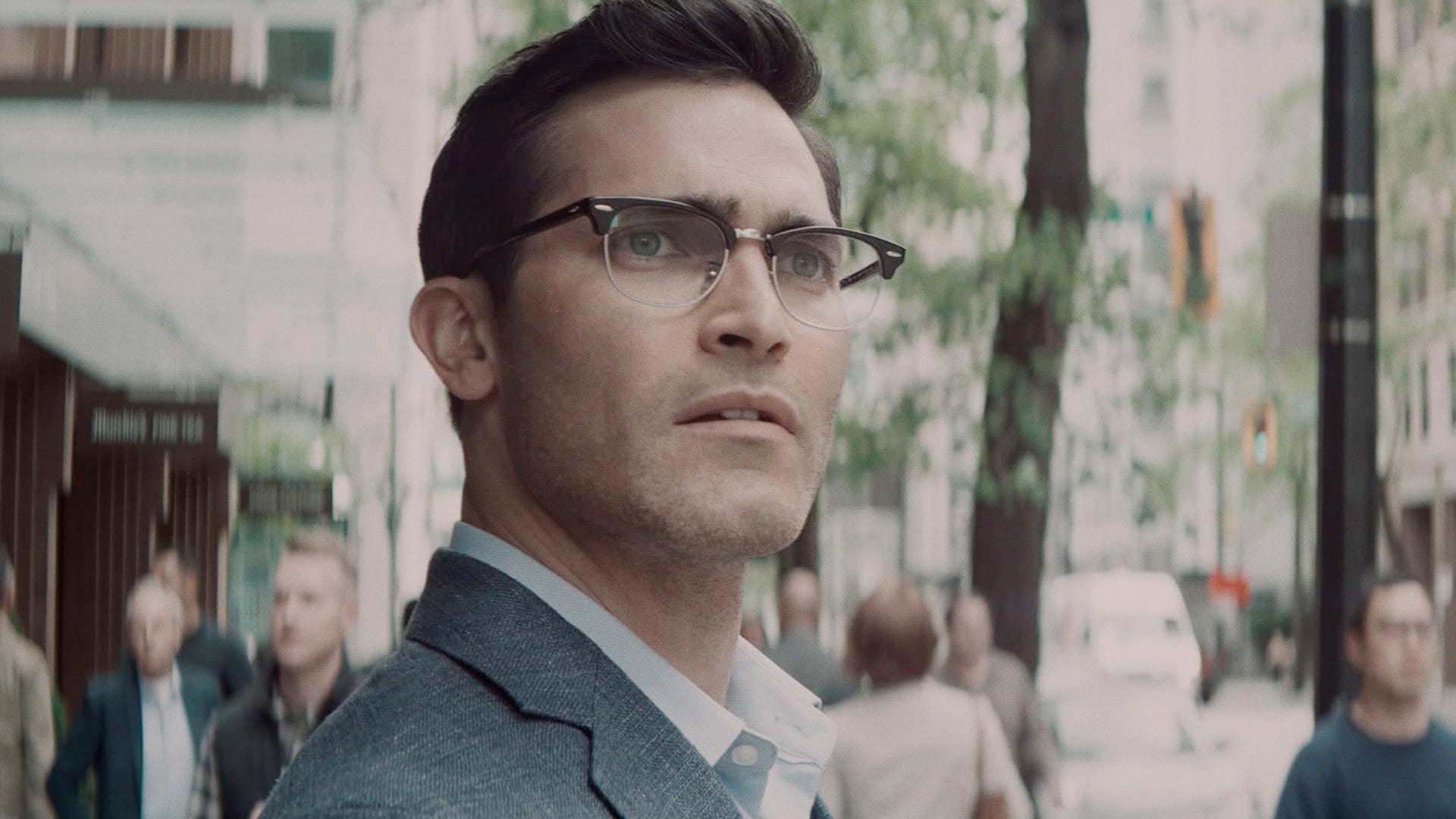 “A Brief Reminiscence In-Between Cataclysmic Events” is a mostly splendid episode that features some of the best Superman & Lois moments yet and points to an exciting final run of episodes to close out the first season. It also has a few elements that hint at a possible infection of the woke virus that destroyed the rest of the Arrowverse. So far, this show has resisted that as only Superman probably can, but the plague is still putting up a fight.

Flashbacks reveal Clark’s early life, from his discovery of the Fortress of Solitude to his move to Metropolis and his transformation into Superman. But is there a greater meaning to them than a simple trip down memory (Lois) lane?

The first ten or fifteen minutes of “A Brief Reminiscence In-Between Cataclysmic Events” are pure magic, invoking the many times we’ve seen Superman’s origin before, and a confirmation that it will never get old. Clark’s first meeting with Jor-El, discovering his heritage, and slowly learning the extent of his powers happen fairly quickly, but they feel like milestones all the same. Part of that is the filmmaking, which is stupendous. The formation of the Fortress of Solitude is majestic, with a sense of awe that’s all the more impressive when you realize you’re watching a CW show. That awe is imperative to these early scenes working as well as they do; otherwise, this would have felt like a waste of time. But Clark’s growth is palpable, partly because of the shifting from a young actor to Tyler Hoechlin and partly due to the look on Hoechlin’s face when he finally takes flight.

The flashbacks then shift to Smallville, where Clark returns to a world that, in some ways, he no longer recognizes, for he isn’t the only one who’s changed. (And, by the way, it’s hard not to instantly feel old when a “when we were young” flashback shows a movie theater advertising a Harry Potter double feature.) In a perfect piece of visual storytelling, Clark sees Lana, his high school girlfriend, and uses his microscopic vision to make out an engagement ring on her finger while she jumps into the arms of her future husband, Kyle. There’s no room for Clark to grow if he stays in Smallville, and Jor-El wants him to get in touch with humanity so that he may understand why he wants to protect it. So, when small-town life no longer fits a country boy, there’s nowhere for him to go but the big city – in this case, Metropolis. You can figure what comes next; finagling a job at the Daily Planet, meeting and falling in love with Lois Lane, and introducing a world that desperately needs a hero to the greatest of them all. This is where we understand why the name of the series is so important; it’s Lois who makes Clark understand why he cherishes mankind so much and why he’s driven to protect it. Her bestowing his name to him takes on even more resonance than it does elsewhere; she’s the one who made him Superman.

It’s also in Metropolis where “A Brief Reminiscence In-Between Cataclysmic Events” takes its first steps down a path we’ve all been hoping it would avoid. To be clear, the show hasn’t gone woke yet; but it is flirting with it, and with the state of the CW, Hollywood, and entertainment in general lately, it’s enough to twist your stomach in knots. First is the introduction of “systemic racism” as an evil for Superman to fight. It doesn’t quite name it, but Lois first mentions “systemic” problems, then jumps to a series of racist attacks, so putting two and two together isn’t hard. (That they call a lone nut with a flamethrower “systemic” indicates that the people currently throwing around that term don’t know what it means.) It would make more sense for the systemic problems Lois wants to expose were things like crooked politicians or – off the top of my head – a certain evil genius billionaire who shares her initials and is the embodiment of all things corrupt in the DC Universe. But, somehow, Supergirl seems to have won him in the raffle, so it’s crazy Nazi flamethrower guy. The next moment is finding a way around Superman saying he stands for “the American way,” because God forbid an American character show any kind of affinity for America. They manage to sidestep it without Superman pulling out a Little Red Book and singing “Back in the USSR,” and I did appreciate him declaring his love for baseball by calling it “the great American pastime,” but I don’t trust them, and eternal vigilance is the price of entertainment. 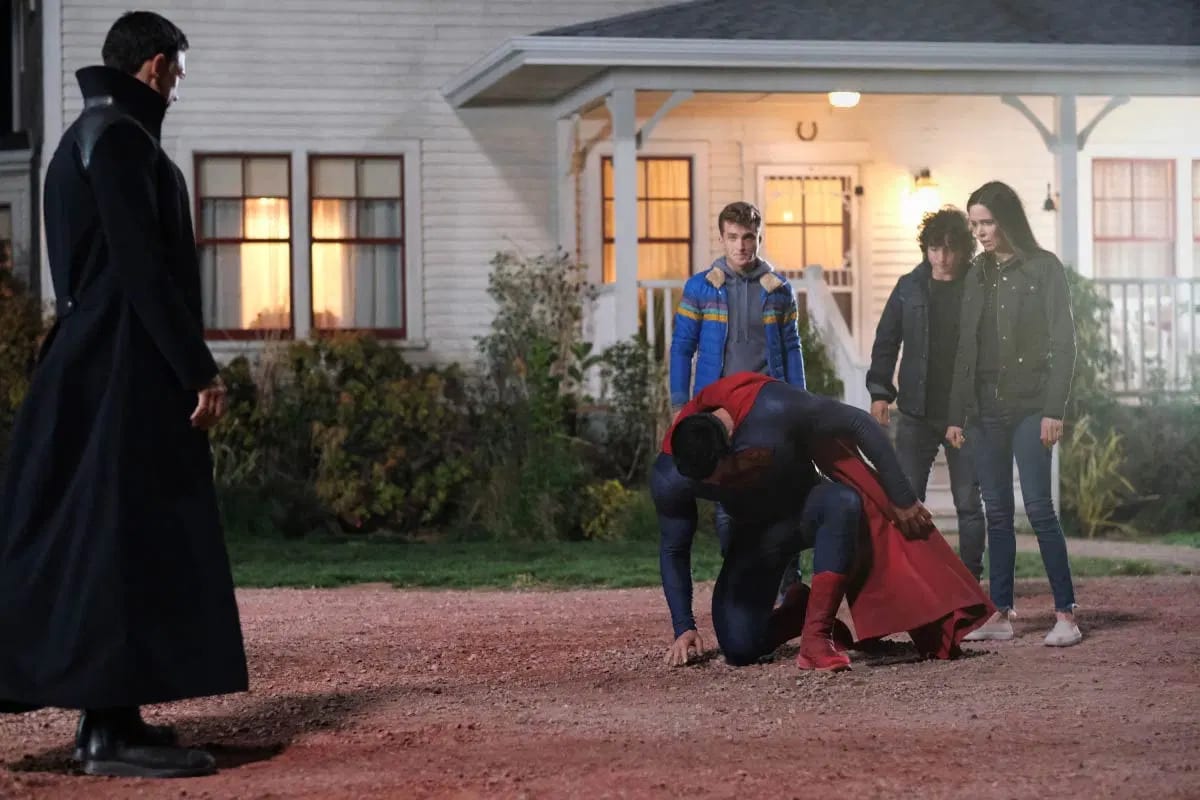 Luckily, those are small moments that don’t go as far as they could have. The real story of “A Brief Reminiscence In-Between Cataclysmic Events” emerges when Clark begins to find himself falling out of these memories, becoming a spectator to his life rather than a participant in it. He’s actually partaking in a mind-meld with Morgan Edge at the Fortress of Solitude, and now his enemy knows his secret identity – which means he knows who Clark’s family is. Once more, the series shows us how to make Superman vulnerable, and it does so through those he loves. What choice does Clark have when a godlike villain threatens to murder his wife and children while he’s been depleted of much of his power? He can lie down and die while watching his family be butchered, or he can serve Edge and become everything he hates. Now, a brainwashed Superman is Morgan Edge’s newest weapon, and Earth’s only hope is the man who traversed the multiverse to kill him. Things are getting really good.

In the background, there are some minor developments in “A Brief Reminiscence In-Between Cataclysmic Events.” Lana and Kyle are now fully on board with the Kent/Lanes, and Kyle swallows his pride and apologizes for his attitude towards them. It’s a small moment, but it’s excellent for his character, and it speaks highly of someone we were sure we would hate when the show began. Kyle’s arc is a good example of how to change someone’s mind. Rarely will simply telling them they’re wrong do the job; they’ve got to come to it themselves, to see things play out so they can see how wrong they’ve been. And Sarah is now officially dating Jordan, which was expected. Again, though, it’s Jonathan who paved the way for this, who saw what his brother needed and stepped up, knowing there was nothing in it for him other than helping his family. If Clark knew half of this, he’d be so proud of his son.

“A Brief Reminiscence In-Between Cataclysmic Events” is a joyous celebration of the Superman mythology, as well as an important piece in this premiere season’s story. A couple of moments toy with going woke, and that fear will linger for a good while now, but it’s mostly great fun and a respectful look at how Clark Kent became Superman.

“A Brief Reminiscence In-Between Cataclysmic Events” is a joyous celebration of the Superman mythology, as well as an important piece in this premiere season’s story. A couple of moments toy with going woke, and that fear will linger for a good while now, but it’s mostly great fun and a respectful look at how Clark Kent became Superman.