"It was another life." 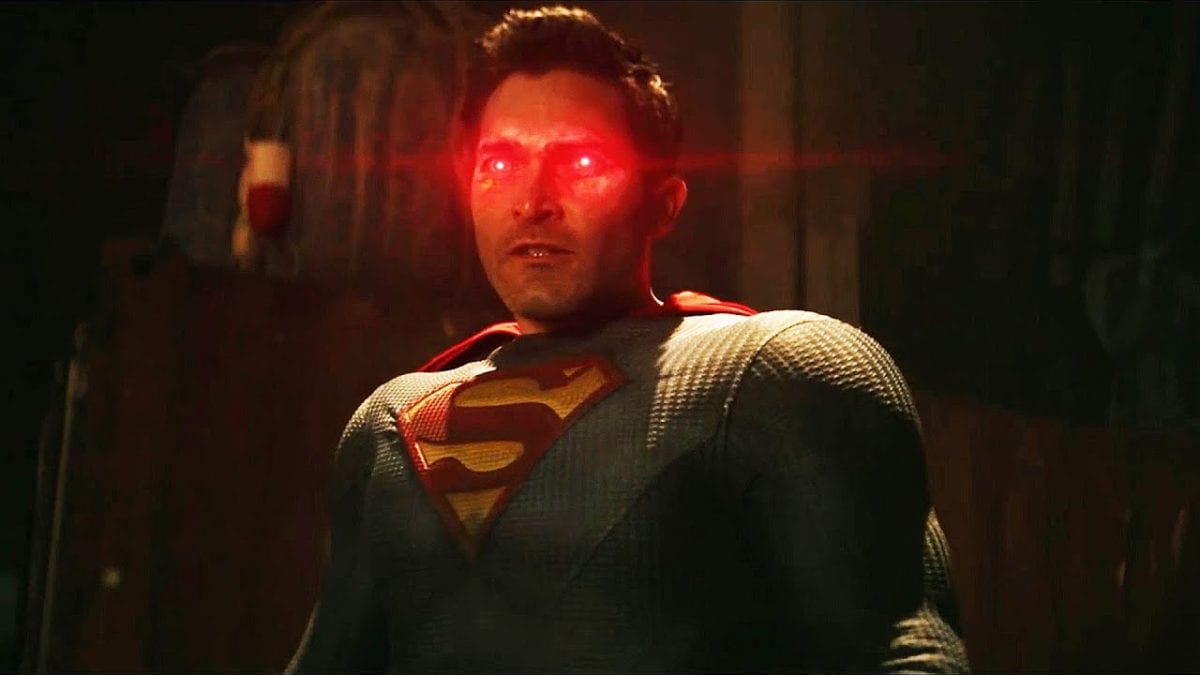 While “Broken Trust” focused mostly on the Kent family drama, “Man of Steel” kicks the season’s plot into high gear with a couple of big reveals that put a new perspective on Captain Luthor’s mission. Jon and Jordan aren’t sidelined completely, though, and Superman & Lois proves once again its adeptness not only at balancing both aspects of the series but merging them. And it’s directed by David Ramsey!

Clark helps Lois discover what secrets Captain Luthor is hiding from her. Jordan struggles with his super hearing. Jon covers for Jordan with Sarah. Morgan Edge tasks Lana with selecting candidates for a special program of his.

“Man of Steel” opens with Clark bringing Jordan to the Fortress of Solitude and seeking guidance from the Jor-El artificial intelligence. Sure enough, Jordan’s super hearing is manifesting, and like his father, it will take time for him to adapt to suddenly hearing a worldwide cacophony at all times. These early scenes showcase something Superman & Lois does exceptionally well: it makes Superman relatable. Many modern writers bemoan his powers and godlike stature, saying it’s nigh impossible to make him human. That’s the lament of the talentless or the lazy (or both), and this is just one example of how to make the average viewer or reader identify with Superman. In helping Jordan as he struggles with his powers, Clark becomes every dad who’s watched his son go through puberty and remembered how difficult it was for him. Many of the great superhero, sci-fi, or horror stories are about making the fantastical a metaphor for something in everyday life. Buffy the Vampire Slayer used monsters as a metaphor for the rigors of high school and the passage from adolescence into adulthood, for example, and The Chronicles of Narnia is a Christian allegory. Superman & Lois uses the Man of Steel as a stand-in for fathers finding that nothing – not even godlike powers – can prepare you for raising children.

However, as Jordan wrestles with his hearing, last week’s theme of Jonathan being his brother’s teacher resurfaces. Clark tries to show Jordan how to isolate an individual sound and shut out the rest using a dripping faucet, but it doesn’t work, and a frustrated Jordan gives up for the day. However, when he manages to lock into Jon’s conversation with Sarah, everything suddenly clicks into place. Just like with punching the log in “Broken Trust,” Jonathan gets Jordan to focus, and funnily enough, it’s through anger that Jonathan finds his concentration. While punching the log, Jon reminded Jordan of the punks from his old school who bullied him. This time, Jordan spies on Jon while he’s talking to Sarah and interprets a friendly conversation as a romantic intrusion on Jordan’s budding courtship. What this has to say about the different relationships a boy has with his father and his brother is fascinating. A dad is more likely to be loving, supportive, and a calming influence, gently showing his son how to do something. But brothers can be much more adversarial, and both times that Jon helps Jordan, it’s through something that makes Jordan angry. In one instance, that anger is directed at others with Jon cheering him on, but this time Jordan wants to straighten out his brother. That it’s a misunderstanding – Jon is interested in another girl – makes it even more realistic; he’s all too ready to believe the worst in the brother he’s spent most of his life envying. And Jon is still bitter about his broken arm, as well as the loss of his social status. (Sarah tells the former football star that the girl flirting with him is out of his league.) But when they find out their dad is in trouble, the love that binds a family trumps all else, and they team up to save the day. The complex nature of brotherhood is examined exceedingly well, and it’s just a subplot.

The main plot of “Man of Steel” is Lois and Clark discovering who Captain Luthor really is, and the answer is both a doozy and something that feels like we all should have seen it coming. Up till now, I accepted that he was some family member of Lex Luthor’s from another dimension, most likely a son. But “Man of Steel” fleshes out the Stranger even before revealing his identity. We already knew he was from a world where Superman went evil, but through his memories, we find that he was married to Lois Lane, and they had a daughter. This is a good twist because it didn’t have to exist, but it makes perfect sense and sheds light on some of his decisions. His asking Lois for help exposing Morgan Edge is logical because Lois was already suspicious of Edge, and she is the world’s best investigative reporter. (These things are measured, you know.) But being her husband on another Earth makes it even more understandable that he’d trust her implicitly and that he’d know just how good a reporter she is. Then comes the startling image of Superman killing Lois; again, coming from a world where an army of evil Supermen fried everyone to death would be enough to spur him into taking action against ours, but to have seen his wife die at Superman’s hand while he sat at home helpless – and no doubt further tormented in knowing that, even if he were with her, he wouldn’t have been able to do anything – makes his motivations that much stronger. Why wouldn’t he do everything he could to make sure he could fight and kill the psycho alien who murdered his wife?

But the real wallop is his true name. The Stranger, Captain Luthor, the guy in the suit, is actually John Henry Irons, whom comic fans will know as Steel. I mean, it’s right there in the title, isn’t it? But the clues were present in “Man of Steel” as well. He’s not evil, as one would expect a Luthor to be. When we see him with Lois and their daughter, no one calls him by name. He’s good with his hands, and he builds a suit capable of fighting Superman. The construction (or, more accurately, reconstruction – the suit once belonged to Lex Luthor, or some Luthor, and the AI wasn’t reprogrammed, which is why it refers to him with the surname of Superman’s archenemy) of the suit is a parallel to Clark and Jordan, and an inversion. Irons works on the suit with his daughter, meaning she is trying to help her dad become super like Clark is trying to help Jordan do the same. The parental role reversals mark Steel and Superman as different men from different worlds but cut from the same cloth. And then, they become more directly linked; Steel’s daughter’s work is allowing him to kill Superman, while Superman’s sons intervene to save him, each character’s children fulfilling the role of their father. I imagine we’ve got a ways to go on this front, and I’m eagerly anticipating watching these two current nemeses become allies and, with a little luck, friends. Maybe that will inspire a more comics-accurate costume for Steel down the road. (Also, having that suit originally belong to Lex Luthor makes a lot of sense from a design and functionality standpoint; it looks like something Lex would construct to even the physical odds with Superman, albeit a little less green than is his tradition.)

Elsewhere, “Man of Steel” sheds a little more light on Morgan Edge’s plan. He wants his army of Kryptonian-powered henchmen to take over the world, and if I’m being honest, that’s a little disappointing. It makes sense, and I guess it’s ambitious, but it feels a bit rote for a show that’s doing so many new and fascinating things. His manipulation of Lana is more interesting, and I like how he gets her to turn on her husband ever so slightly. This is now a card he holds should he ever need leverage on Lana; if Edge tells Kyle that he suggested giving him a job and Lana said no, I doubt it would do wonders for their already rocky marriage. But, ultimately, Lana likely saved Kyle’s life, inadvertent though it may have been. Her friend Emily may not be so lucky, though, and Lana may end up either facilitating her death or watching her become a monster. This nicely illustrates the corrupting influence of a man like Morgan Edge and how his rot will spread even to the loved ones of those caught in his web.

“Man of Steel” is a fantastic episode with big plot twists that are smart and compliment the story rather than propping it up, a strong subplot about the family dynamics that are the show’s backbone, and the promise of great things to come.

“Man of Steel” is a fantastic episode with big plot twists that are smart and compliment the story rather than propping it up, a strong subplot about the family dynamics that are the show’s backbone, and the promise of great things to come.

I have to do this for a class, so pardon the length.

This is a very well-balanced review. You acknowledge the different theories held by the fanbase, such as the Stranger’s identity. You also do a great job of noting the attitude awareness presented in the episode. The Stranger is trying to kill Superman, a beloved hero, husband, and father. However, that Stranger watched the Superman of his alternate universe destroy the world and murder his wife. This article does a great job of acknowledging the human dignity of both the super alien and the interdimensional traveler.

You truthfully represented the episode, providing all the necessary details for a review and even some insights I didn’t notice. Your take on Superman’s and Steel’s family dynamic is inspiring, and gives me hope that the two will work out their differences. The article is skillfully developed and easy to follow. I’m not a big fan of chunky paragraphs, but that’s just me. I could tell what you wrote was motivated by your experience, and as of such I was able to relate to it as well. I look forward to reading further reviews from you.

Thank you very much, I appreciate that.

If I may ask, what class are you taking and what was the assignment? I’m flattered you chose an article of mine.