"Why is it so hard to keep you safe? 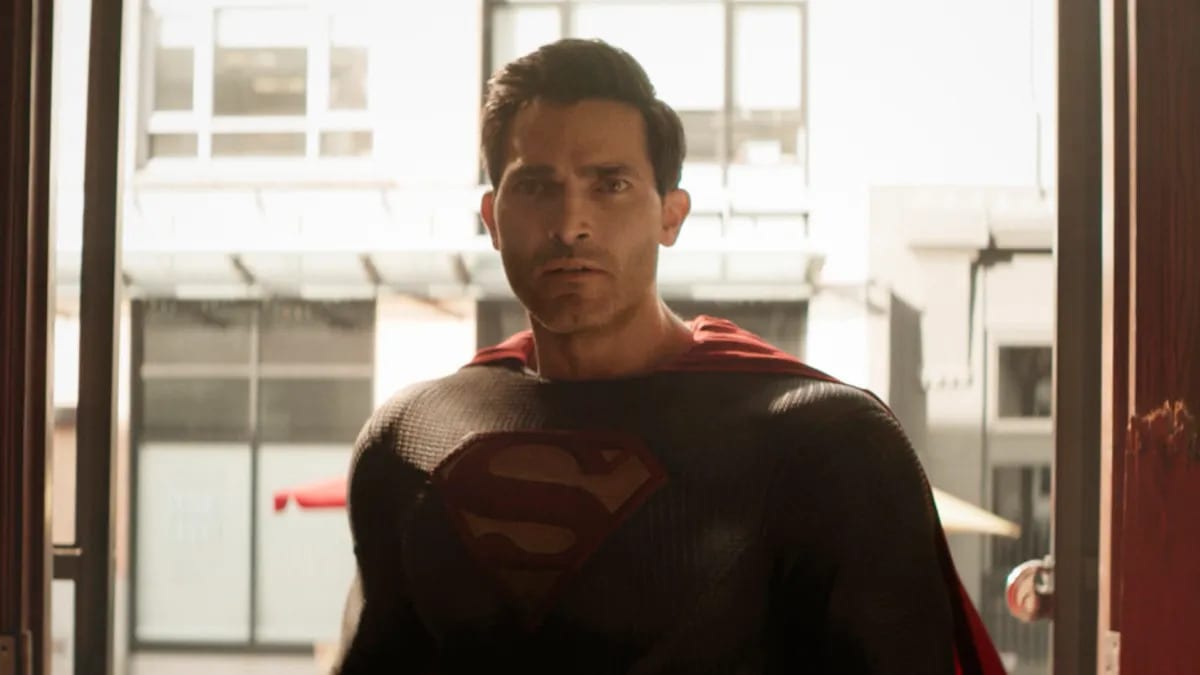 Well, then. Superman & Lois sure knows how to leave you wanting more, doesn’t it? “Loyal Subjekts” builds on last week’s theme – people feeling inadequate – and explores a new difficulty families face. It also ramps up the Morgan Edge plot considerably, with some big surprises that set up an epic confrontation when the season winds down.

Lois finds a surprising ally in her investigation into Morgan Edge. A routine rescue is more difficult for Superman than it should be. Jordan’s powers go haywire again, but not for the usual reasons. Jonathan struggles with being normal. The volunteers for Edge’s program are satisfied with the results.

“Loyal Subjekts” lulls you with its opening scenes, preparing you for a quieter episode that will move the plot along slightly without leaving much of an impression. Lois talks about what little progress she’s made with her probe into Edge’s company while Clark fixes the boys lunch and gently prods Jordan for insight into his feelings for Sarah. Jordan and Jon navigate teenage dating at school. Lois goes to work and examines what she already knows about Edge. It’s nothing spectacular, and that’s by design because something big is coming.

It starts right around the moment Clark hears a group of heavily armed thieves takes a bank hostage in Mexico. Superman flies in to save the day, and everything looks normal – until the bad guys shoot him, and the bullets hurt. Firing a gun at Superman is the equivalent of an infant throwing a tissue at us, but he’s suddenly being moved back and even knocked to the ground by these shots. When he arrives home, he’s full of bruises that shouldn’t be there. It’s obviously the after-effects of being exposed to that synthetic Kryptonite in “Holding the Wrench.” What isn’t obvious is that Clark is now a carrier of the synthetic Kryptonite and has passed it on to Jordan, whose body reacts by freezing all its fluids; when he sneezes, for example, the mucus turns to ice on his hand. Superman will be okay, but a teenager just discovering his powers is in mortal danger because the fluid in his lungs is frozen solid.

Jordan’s poisoning is what introduces the theme of “Loyal Subjekts,” and like the previous episode, it’s a theme that every featured character shares: the fear someone feels at their inability to protect their family. Even at his weakest, Superman can save the hostages in that bank from a bunch of criminals, but what does he do with his sick son? Seeing Jordan in danger brings back Lois’ terror at almost losing Jonathan a week ago. And while Clark feels responsible for making Jordan sick, Sam is the one who really did this to his grandson, and it was his desire to protect his family that made him develop the synthetic Kryptonite. In a way, Superman inadvertently caused it; Sam’s fear of a compromised Man of Steel led him to build a weapon capable of stopping him, and in doing so, he hurt his grandson. Last week, Sam was a stand-in for us and the trust and hope we put in Superman; this time, he’s the fear we’d probably feel if an all-powerful being were flying around, no matter how much we loved and trusted him. We tend to be the source of our own fear and pain, though we may ascribe it outside forces.

But, as adept as we are at getting ourselves into trouble, we’re the key to getting ourselves out of it as well, and for protecting the family we’re so afraid of failing. Instead of waiting around for a cure that may or may not come, Clark takes Jordan to the Fortress of Solitude and saves his son using one of the gifts his father left him, holding his hand the entire time to make sure Jordan knows his dad loves him. The weapon Sam developed that hurt Jordan allows him to save Lois and Jonathan from some artificial Kryptonians. (And anyone who watched the short-lived Brooklyn South will enjoy seeing Dylan Walsh kick a little punk ass again.) And, once Jordan is healed, Superman saves the rest of his family, the face of their salvation rather than the facilitator of his son’s almost-demise. Even Jon gets his moment; throughout “Loyal Subjekts,” he feels inadequate, and his lack of superpowers is the root cause. (Getting turned down by a girl isn’t the direct result of it, but it’s hard for Jon not to notice how much smoother Jordan is now that he’s got heat vision and super strength.) But his conversation with Sam reveals that his true power is in his heart, his devotion to his family, and his determination that it will never waver, even when seeing the horrors of which his father is capable. It’s a misstep that the episode doesn’t devote just a bit more time to Lois in this regard, but consider that, while she blames herself for Jonathan almost being killed, she was the one who saved him by calling for Superman instead of panicking.

The theme surfaces elsewhere in “Loyal Subjekts,” but the other denizens of Smallville don’t have the support the Kents/Lanes have for each other. Emily Phan, Lana’s friend, was so desperate to get into Morgan Edge’s testing program because she’s being crushed by a mountain of bills she can’t pay, and she fears for her family. Likewise, Kyle has been feeling the strain of unemployment for a while, and while Lana is taking care of him and Sarah, he still believes he’s failing in his duty as a husband and father. Both of these people sign up with Morgan Edge with the best of intentions, and they suffer the torture of the experiments (which are filmed particularly well; it looks like less of an MRI scan and more of a cremation, a symbol for the hell to which they’re being led) with their loved ones in mind. And, at first, they feel great. Emily is sharper, more confident, and able to deal with any crisis that pops up because of her treatment. Kyle is friendlier to the Kent boys, more attentive to Sarah, and able to support her the way he failed to last week. But the dark part of the deal is their effective enslavement by Edge, losing themselves completely at a moment’s notice when he sends out a signal that turns them into sleeper agents. While the Kents/Lanes talk to each other – Clark shows Lois his wounds; Jordan calls for his father immediately when his hands freeze; Jonathan has a heart-to-heart with Sam – Emily and Kyle keep their ordeal a secret and wind up with nobody to turn to when things go sour. Kyle has finally admitted his involvement with the program to Lana, who is now actively helping Lois expose Edge; maybe he has a chance of making it out alive.

This leads to the long-overdue development of Morgan Edge as the season’s main villain. He’s presented in “Loyal Subjekts” as the devil, the all-powerful entity who offers what you most desire, and all he asks in return is your soul. Lois can protest from the highest mountain she can find (or in a crowded board room, which is maybe the dumbest scene this show has had yet; someone as smart as Lois wouldn’t just barge into that meeting like an idiot and not only give herself away but make the people she’s trying to save think she’s a raving lunatic), but it’s hard to convince people that the guy ending their problems is evil. There are two major reveals in this episode, and neither of them is Kyle’s inclusion in the program. The first is that all the fake Kryptonians were once normal Smallville citizens, including his right-hand woman, Leslie Larr, a perfectly nice lady who made the mistake of signing up with Edge. She’s so far gone, so corrupted by the tempter, that she doesn’t even have her own name anymore. The second is obvious: Morgan Edge is a Kryptonian too, and Superman’s brother! (When he revealed his powers, I immediately guessed he was Zod; shows what I know.) He is what Sam Lane and John Henry Irons feared Superman would become, and he’s always been here, passing himself off as humanity’s savior, just like his heroic counterpart. Now, his desire for world conquest makes a lot more sense, and I can’t wait to see him try it.

“Loyal Subjekts” explores the fears of failing one’s family as it reveals some secrets about Morgan Edge and his ultimate plan. Background characters are fleshed out, everyone’s humanity comes out again, and we’re left with a better understanding of the season’s plot. We’re also left wanting more.

“Loyal Subjekts” explores the fears of failing one’s family as it reveals some secrets about Morgan Edge and his ultimate plan. Background characters are fleshed out, everyone’s humanity comes out again, and we’re left with a better understanding of the season’s plot. We’re also left wanting more.