REVIEW: Superman & Lois – Season 2, Episode 3 “The Thing in the Mines” 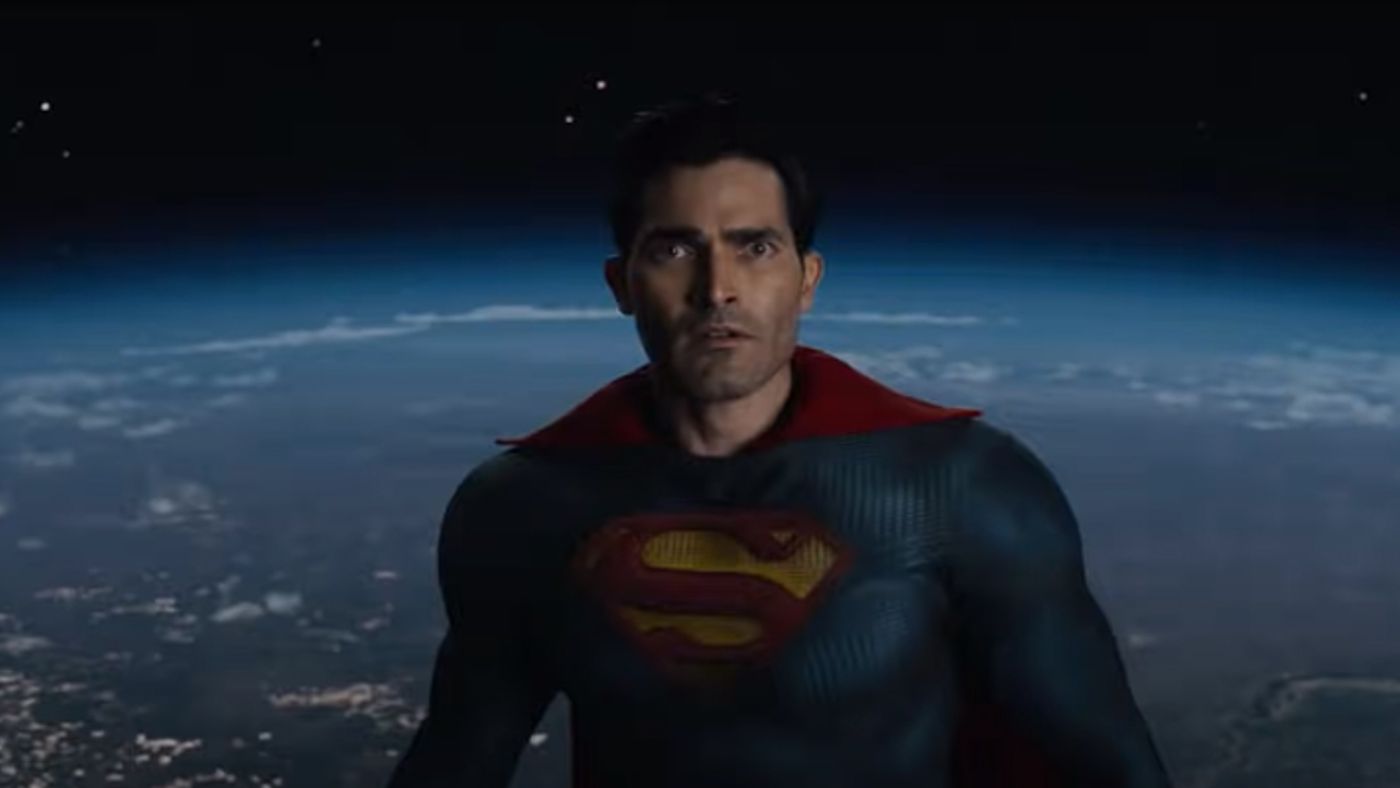 With “The Thing in the Mines,” Superman & Lois’ second season falters. The main story suggested in the title takes a back seat to the subplots, and as they play out, it’s becoming clear that none of them are nearly as interesting as the burgeoning threat. It doesn’t help that they take some frustrating turns that diminish – or continue to diminish, in one case – a few of the characters. But the twist is worth sifting through the chaff.

Clark’s visions take a heftier toll on him, putting his family in danger. Lois asks her father for help with Clark and the cult that brainwashed her sister. John Henry must choose between giving his daughter a normal life and helping those in need. Jordan struggles to rebuild his relationship with Sarah. Jonathan discovers the secret to his football rival’s sudden athletic improvement. Lana finds running for political office more difficult than she and Keith thought.

Superman begins “The Thing in the Mines” in a familiar scenario: floating in the heavens, listening to mankind’s every word until he hears people in trouble and decides this is a job for Superman. But as he flies to the rescue, he begins experiencing his visions again; this time, they’re so debilitating that they knock him out of the sky. They’ve been bad in the past two episodes, but now, they’re taking Superman out of action completely. This is a sign of things to come: Superman will not be himself this week, and people could get hurt because of it.

Both of these problems intensify quickly; when Jordan asks his dad about revealing his secret to Sarah, Clark’s logical argument against it turns into a laser-eyed demand to be obeyed. And later, when Jon gets into a fight on the football field, Clark’s rebuke again turns violent, this time with full-blown heat vision. Both of these scenes feature a reasonable reaction from a responsible father being affected by an outside influence until they become dangerous – think of a drunk dad swinging at his child or a bad day at work resulting in a heavier hand than normal. But Clark also demonstrates good judgment in both instances, first in asking Lois to take the kids to school in his place and then by directing the out-of-control heat vision at his own hands. The second is even more powerful, as a moment and an image; Clark taking on physical pain to protect his son is the epitome of a father’s sense of duty and sacrifice. Beyond the subtext, though, it’s clear that something is wrong with Superman.

It’s equally clear that what’s wrong with him is the very title of the episode. “The Thing in the Mines” is a physical and mental threat to Clark, and he’s got to confront it before he kills someone. He explains to Lois that he can feel the creature’s emotions, and when he gets violent, he’s almost a passenger in his own body while the thing takes over. And when the beast finally emerges, a fight reveals that it isn’t Doomsday, as we all thought it must be. No, Superman is up against Bizarro. Unfortunately, I can’t speak to the shock value of this twist, as I don’t watch these episodes live, and social media couldn’t wait to spoil it for everyone. However, I do appreciate the misdirection. We’ve seen versions of Doomsday before (for better or worse), but I don’t think there’s ever been a live-action appearance from Bizarro before this one. And Superman & Lois has captured the look and feel of the character stupendously; he’s got the inverted “S,” the tattered uniform, the scarred white face, the backwards speaking, and the childlike desire for love and acceptance. (I imagine Warner Bros. is thrilled at not having to pay another actor, too, as Tyler Hoechlin is portraying Superman’s decrepit doppelganger.) The buildup has been great, but I’m glad they revealed Bizarro this early because there’s a lot the show can do with him. 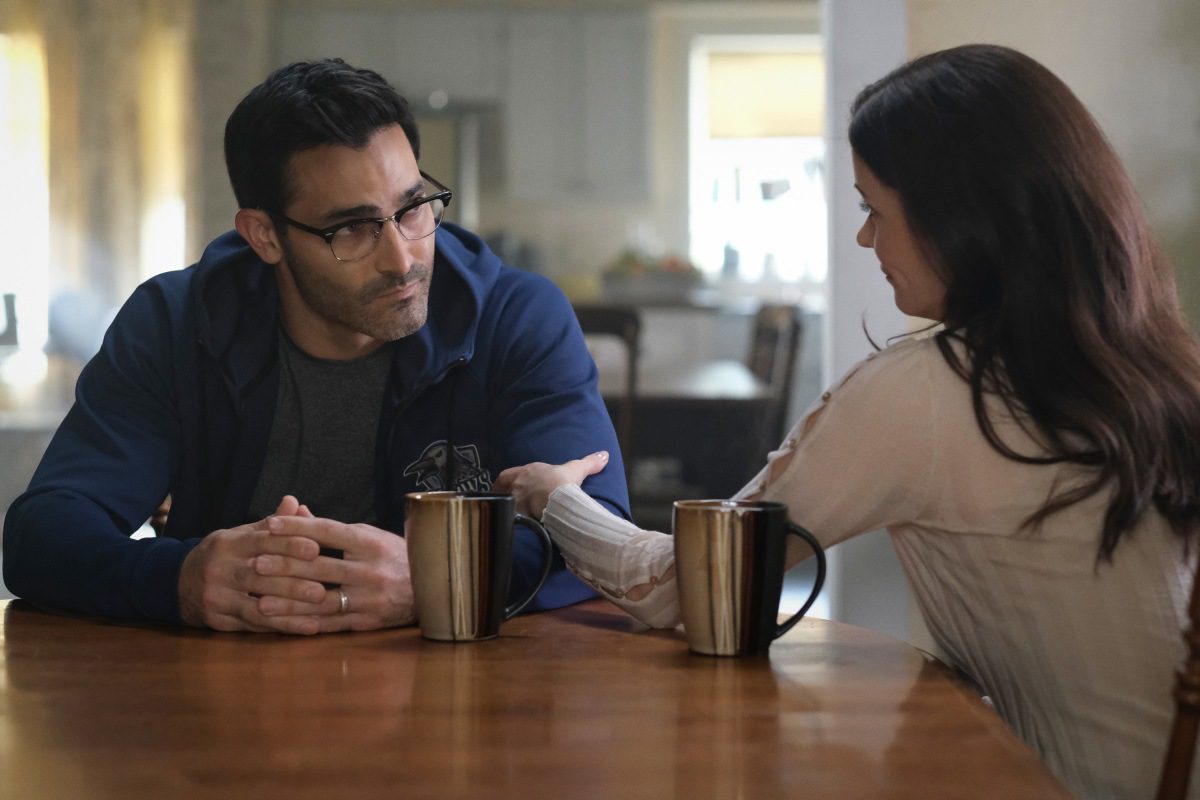 “The Thing in the Mines” features more of that buildup, and it’s used to great effect because it highlights two of Superman’s biggest admirers – one who’s been around and one who’s been absent. Lois calls in her father Sam from his fishing vacation (Sam Lane spending his retirement fishing by himself feels right) to use his military contacts to get her access to the mines so she can find out what’s messing with Clark’s head. But Sam points out that his daughter running around a controlled site like that will, to say the least, raise some eyebrows. But will John Henry Irons? John Henry steps up, despite protests about his promise to give Natalie a normal life on their new Earth. Sam and John Henry both tie into the theme of fathers doing what’s best for their children. While Clark had to sacrifice time with his sons and take the full force of his heat vision, Irons has to put himself in danger to teach his daughter the importance of helping others, even when it’s difficult, inconvenient, or dangerous. I’m very happy with how the Irons storyline is playing out; it isn’t just Superman who knows what it means to be a hero, and John Henry wants his daughter to learn that too.

Sam’s parental responsibilities are demonstrated through his strained relationship with his daughters, and it’s here that “The Thing in the Mines” begins to grate. The subplot itself is fine; after neglecting them in their youth, Sam is so scared of losing one of his girls that he ignores the danger posed to Lucy as she gets close to a cult, just like he did the first time. He now learns what he should have years ago: sometimes you have to risk your children’s anger to do what’s best for them. It’s a good message, it complements Clark and John Henry’s plots, and Dylan Walsh puts the perfect human face on a deeply flawed man struggling to do the right thing. The problem is Lois; I understand her anger, but it’s starting to seem like all she does is scream at people. What makes it worse is that her rants often make little sense and come off as overly emotional outbursts that a grown woman – especially one as savvy and intelligent as Lois Lane – should be above. If they were a little bit better written and delivered in a more rational-seeming tone, I think they’d work better. But I’ve had enough of them for a while, and I hope that once she starts looking into the cult, she’ll have more interesting things to do. 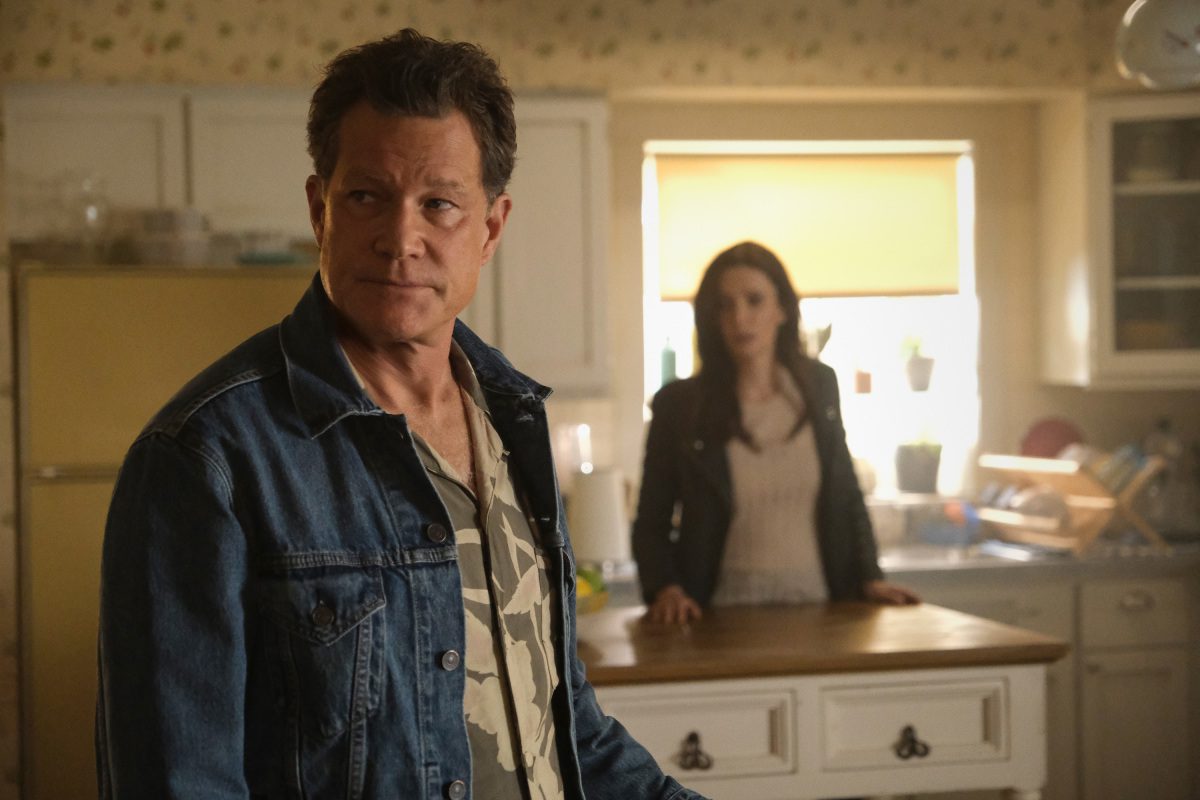 Even worse is everything involving the Cushing family. Lana is running for mayor, but she seems to think being a woman and throwing money at people should be enough to get her the win. (So does Keith, and some of the things he says are more bizarre than Bizarro; he actually suggests that Smallville will vote Lana into office because she’s a woman. This is why you need to hire an actual campaign manager.) But when someone asks her a few tough questions, she balks. And everything that guy brings up is reasonable; who wouldn’t want to know the consequences of taking a supposedly free check, especially from the government? And Lana’s response is to make one of those awful, cringe-inducing home videos politicians seem to love nowadays. (I can’t be the only person reminded of Elizabeth Warren’s “I’m gonna go get me a beer,” delivered like someone who assumes that’s how the little people talk.) If this were presented as a terrible idea, it might have worked, but Sarah keeps giving her mother a thumb up and nodding approvingly throughout the video, so I think we’re supposed to believe this is a good move. It sounds like the emphasis will be on how Lana is a woman and, therefore, owed the mayor’s office, and I already want this once-promising plotline to end.

But the worst has to be Sarah and Jordan’s tiff. Remember how Sarah kissed someone else while she was at summer camp? (Can we please get some kind of confirmation that she was a counselor? A fifteen-year-old going to summer camp is weird.) Well, somehow, Jordan is the bad guy because he’s having trouble reconciling himself to his girlfriend cheating on him. This bothers me, and not just because I suspect it would be a different story if the shoe were on the other foot. Why is Jordan obligated to be okay with this? It baffles me, but everyone around him seems to think he should be. Jonathan even says he’s a hypocrite because he hasn’t told Sarah he’s got superpowers yet. Secrecy is not the issue here; it’s cheating on someone, and Jordan isn’t using his super strength to kiss other girls. Lana’s little pep talk with Sarah is some of the worst parenting I’ve ever seen portrayed on TV; she’s actually telling her that Jordan doesn’t deserve her if he can’t get past her betraying him. This is the exact opposite of what Clark, Sam, and John Henry are doing for their kids, but it’s presented as a good thing. It’s hard to want Jordan and Sarah to make it after that. 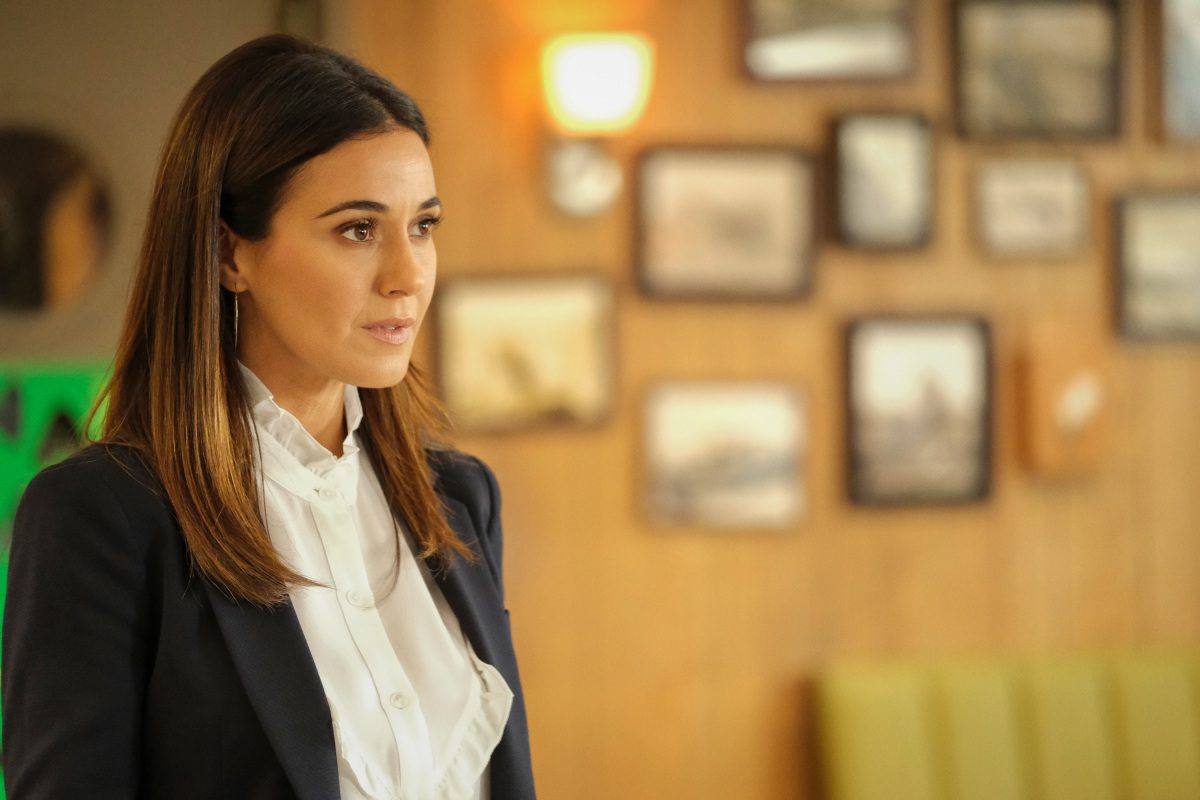 This nonsense also takes time away from Jonathan’s subplot. “The Thing in the Mines” confirms his suspicion that his teammate is taking performance-enhancing drugs to help him on the football field. The big surprise is that Candice, his girlfriend, is the one selling them. These aren’t steroids either; they’re some kind of crystal, which I imagine we’ll discover is a form of Kryptonite. And instead of getting on her case about it, Jon asks her to score him some crystal too. There’s potential here, but it isn’t being properly set up. Imagine if the stupid Jordan/Sarah drama didn’t exist and, instead, the show demonstrated that Jon was growing envious of Jordan’s powers and desperately wanted to feel like he had some of his own. Maybe they could have had a scene where he saw Jordan bonding with Clark over their powers and felt like the outsider looking in, lamenting a bond he could never have. I don’t really know what’s spurring him on right now because the show hasn’t given us anything to go on yet. It’s a shame, as are the rest of these subplots, and they bog down “The Thing in the Mines.”

Superman & Lois – "The Thing in the Mines"

"The Thing in the Mines" offers a great twist and a good theme about parenting and sacrifice, but the subplots involving Lois and the Cushings are annoying, dull, and in some cases immoral.