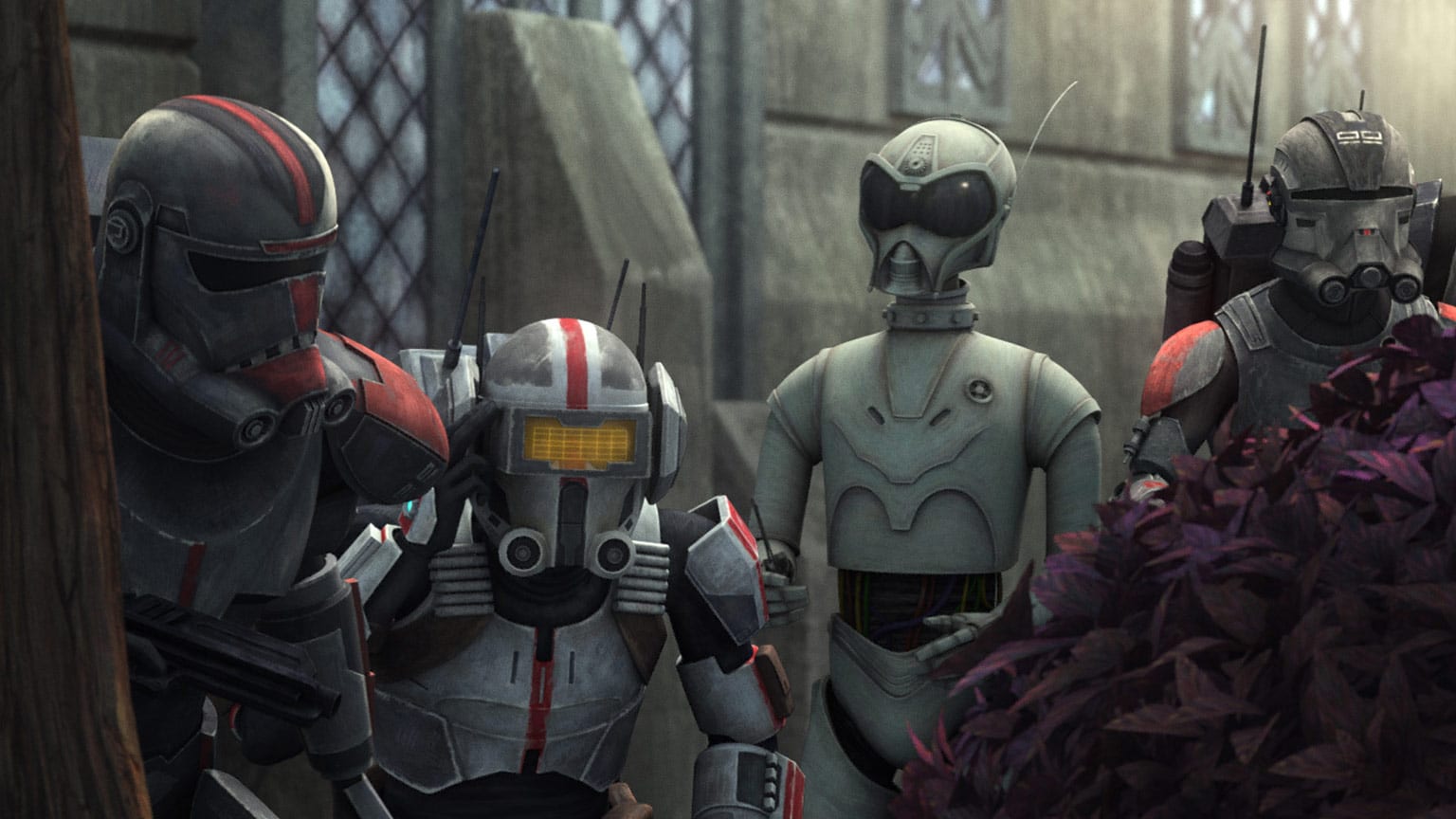 “Common Ground” opens on Raxus amid a rally. The formerly Separatist planet is being occupied by the Empire, but senator Avi Singh goes off-script at the rally and is arrested. Meanwhile, the Batch – and Hunter, specifically – decide their missions are just too unsafe for Omega.  At first, Hunter wants to lay low for a while, but Cid gives them a mission to break Singh out and pay her back. The Batch reluctantly accepts the job, but Hunter orders Omega to stay behind with Cid where she’ll be safe. Echo, in particular, isn’t thrilled about saving a Separatist senator, the very embodiment of the enemy he fought in the war. He even suspects a trap at first, but the clearance codes provided by the client are good. Once they arrive on Raxus, the guys quickly discover that their employer is a droid belonging to Senator Singh. Meanwhile, Omega impresses Cid with her skills in Dejarik, and they make a bargain. Back on Raxus, the guys bust Senator Singh out, but a new challenge presents itself: they have to trust the Intel of a Separatist to get him out of there safely. All goes surprisingly well, and they get Singh and his droid back to Cid, who informs Hunter that Omega earned enough to pay off the Batch’s debt to her. Hunter challenges Omega to one final game, and if she wins, she won’t be “grounded” anymore.

“Common Ground” represents an important step along the Batch’s journey as this is the first time their core beliefs have been challenged. Echo, especially, resists working for any Separatists under any circumstances, although Hunter makes a brief remark about not wanting to work for them either. Even once the clearance codes prove valid, he’s uneasy around both the Senator and his droid. I like how they’re exploring this idea that, while the war is over, the clones don’t know how to look at the big picture. They’re still worried about the Separatists and see them as a threat when none of that matters anymore. As the Empire grows ever more powerful, petty squabbles among powerless factions mean nothing. It makes sense that Echo would be the most stuck in this mindset since he was once a reg, unlike the rest of the Batch. And that’s to say nothing of what the Separatists did to him on Skako Minor, as we saw in season seven of The Clone Wars. I like that they’re focusing on the Batchers aside from Hunter, and I hope and assume that Wrecker will soon get his own moment in the spotlight.

“Common Ground” is also the first time I’ve been able to enjoy the character of Cid at all. Her whole street-smart tough guy routine wasn’t in the least funny or charming to me. This episode is the first time she shows any genuine emotion, in this case toward Omega, as she grows to respect her and maybe even care about her. I liked the moment early on in the episode when she tells Omega the others might not leave her behind if she wasn’t so helpless. The look Cid’s two patrons give her speaks volumes. She doesn’t know how to speak or act around kids, and it’s interesting to see The Bad Batch acknowledge a flaw like that with a side character like this. I enjoyed this subplot in general, even if it was a little slow/small in comparison to the Batch’s exploits. At the end, I was surprised to see Cid stick up for Omega when Hunter got onto her for drawing attention to herself. I also liked it early on when Hunter tried to give Omega directions for the mission, forgetting that he made her stay home. She has become an integral part of the team now. I’m sure Omega will win the Dejarik game and be allowed to go on missions in the future. I think it was wise to have Omega using her time with Cid to benefit the Batch; she’s adaptive and smart and wants to please them, especially Hunter. This seems in perfect keeping with that.

The animation continues to impress in “Common Ground.” The sweeping shot of the buildings on Raxus in the beginning took my breath away; this genuinely looks like a painting you would hang on your wall. There’s a good deal of subtle character animation I enjoyed in this episode, too, like the looks Echo gives the Senator once they get him out. They seem to be adopting elements of Rebels’ art style into the Clone Wars-reminiscent animation The Bad Batch uses. Bragg and some of the crowd on Raxus seemed like improved Rebels models: unlike Clone Wars characters, she has a long, thin face instead of a blocky, rounded one. Kevin Kiner’s music for the show is a highlight among highlights. Alexander Siddig (Star Trek: DS9, Game of Thrones) voices Senator Singh, and he’s pretty good. As usual, Dee Bradley Baker does most of the show’s heavy lifting as the Batch and all of the clones. Michelle Ang and Rhea Perlman have good chemistry as Omega and Cid, trading insults and, eventually, Dejarik advice.

Overall, I liked “Common Ground” well enough. I enjoyed Omega’s storyline this week, and I hope to see more of this side of Cid. I also enjoyed the heavier story on Raxus with the Batch. However, I wish they, and Echo, in particular, had more of an arc regarding coming to a new understanding of the Separatists. There’s a moment at the end where Echo agrees with Singh’s droid that he should escape to fight another day. This was a good moment, but I feel like the Batch should have had a bigger realization or change of perspective here. What “Common Ground” lacks in narrative punch, it makes up for in gorgeous animation, voice acting, and fun.

Overall, I liked "Common Ground" well enough. I enjoyed Omega's storyline this week, and I hope to see more of this side of Cid. I also enjoyed the heavier story on Raxus with the Batch. However, I wish they, and Echo, in particular, had more of an arc regarding coming to a new understanding of the Separatists. What "Common Ground" lacks in narrative punch, it makes up for in gorgeous animation, voice acting, and fun.