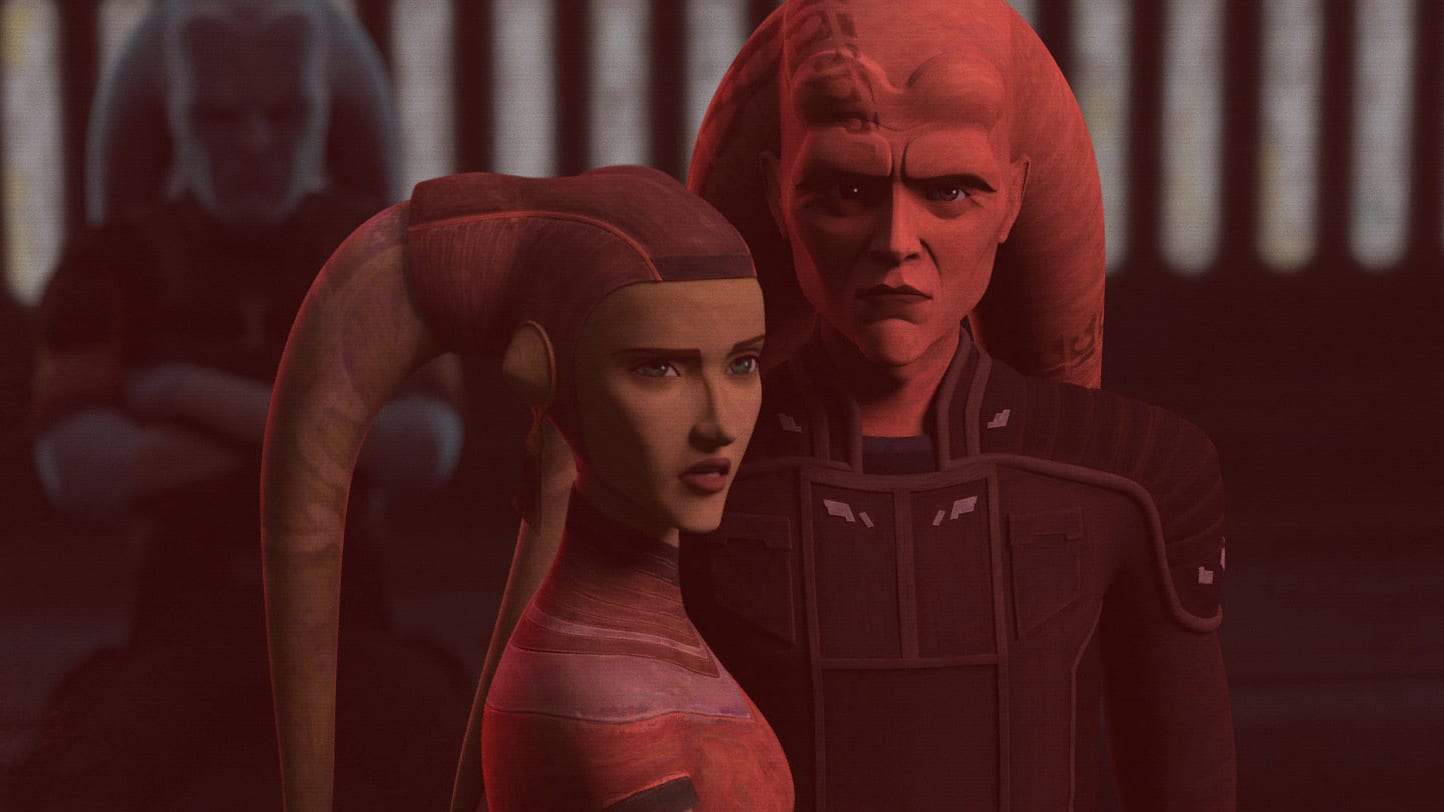 “Rescue on Ryloth” sees Admiral Rampart taunting the imprisoned Cham and Eleni Syndulla. He informs them that Hera will soon be recaptured, and Cham’s followers will be dealt with even more easily. Howzer doesn’t want to follow the Admiral’s orders to round up Cham’s people and capture Hera. He points out that Cham didn’t kill Senator Tar but relents when Admiral Rampart reminds him of his place. Meanwhile, Hera contacts Omega and begs for help freeing her parents. Hunter doesn’t want to get involved in yet another Imperial conflict, but Omega persuades him and the Batch to help. Howzer asks Cham for Hera’s position so he can protect her from Crosshairs’ squad, but Cham says he doesn’t trust him after what’s happened.

Crosshair warns Rampart about the Batch, but he tells him to worry about his mission to find the girl. Omega and Hera take out the Imperial refinery as the Batch releases the Syndullas and other prisoners. Howzer warns the escapees of a brigade of soldiers waiting for them at the exit. Cham trusts Howzer and tells him they will be back. They decide to use Senator Tar’s shuttle to escape. Howzer tries to rally the clones in opposition to the Ryloth occupation, and it works at first, but Crosshair has them arrested. Upon escape, the Syndullas offer the Batch their payment, but Hunter declines, remarking that they’ll need it more with the fight they’ve got ahead of them. The two parties part ways on good terms, particularly Omega and her new friend Hera. Admiral Rampart acknowledges that he underestimated the Batch and grants Crosshair permission to track them down.

I think Disney+ should have released “Devil’s Deal” and “Rescue on Ryloth” together as a two-parter. This is what Rebels did with special episodes like season premieres and finales, and I think it would have made sense here. This was one story, and I think the only purpose served in separating them is to keep Star Wars content releasing on their app every week for longer. I watched them back-to-back because my husband needed to catch up on last week’s show, and I think they create a better experience as a double feature. That’s not a slight on either episode; I just think that would have made more sense in scheduling terms.

As for the episode itself, I’m intrigued by the budding friendship between Hera and Omega. Hera never mentioned or encountered Omega in Rebels, but we should be used to Star Wars retconning itself by now. Hera implies at the end of “Rescue on Ryloth” that she expects to see Omega again, so I wonder if we will see the two together again at some point down the road. They could be featured in any of the Mandalorian-era shows Disney+ is developing, especially Ahsoka. Omega’s voice actress, Michelle Ang, looks close enough to an adult version of her character to play her if that happened. I liked Omega’s determination to help Hera’s family, telling Hunter, “I’d do the same for you.” The one thing that was really weird with Omega in this episode was when she told Hera the Batch are her brothers. I buy this with Echo, Tech, and Wrecker especially. Wrecker has this playful relationship with her and is himself the most child-like of the bunch (despite being the most destructive and violent). And, biologically, they are basically siblings, being altered clones of the same man. But Hunter strikes me more as an overprotective father figure than an older brother for Omega. It may be a weird thing to get hung up on, but that just isn’t the type of relationship Omega and Hunter have been shown to have. I don’t expect her to call him “dad” or anything, but this was just weird, whereas Ahsoka describing Anakin as an older brother felt perfectly natural.

The stuff with the other clones was great this week, especially Crosshair and Howzer. I wish Crosshair had more of a direct clash with his brothers, but I guess that’ll be the big season finale fight. It was a nice touch to have him warn Rampart of how much trouble they were going to be, only for him to underestimate them anyway. To Rampart or any other Imperial bureaucrat, the Batch seem like nothing more than a small squad of elite clones. But Crosshair knows his brothers better than that. I wonder if he’ll find them in the next episode or if they’ll draw it out more than that.

On the opposite end is Howzer, a clone whose inhibitor chip seemingly never kicked in. He seems to view the Syndullas as family and does whatever he can for them. In “Devil’s Deal,” he did so within the bounds of the law, for the most part – although he did return Hera to her parents without reporting her, which probably wouldn’t have been okay with Rampart or Crosshair. In “Rescue on Ryloth,” both his care for the people of Ryloth and his loyalty to the Empire are put to the test. He initially chooses the Empire, but I think we all knew he was going to come around. All his unsure glances and sorrowful obedience were leading up to this. I was surprised by how many clones wanted to go along with his rebellion, though; seriously, how many inhibitor chips didn’t work? How many clones are out there disobeying orders? Because, at a certain point, if so many were unaffected, order 66 simply wouldn’t have happened. Or at least a ton of Jedi would have made it out alive due to the actions of unaffected clones. Regardless, I was glad they were arrested instead of killed. The moment Howzer spoke up, I was afraid he was on the chopping block.

Overall, I really enjoyed “Rescue on Ryloth.” I liked it a little less than “Devil’s Deal,” but I think the two episodes work best as a back-to-back deal. I look forward to these last four episodes and the inevitable face-off with Crosshair.

The Bad Batch – "Rescue on Ryloth"

I really enjoyed “Rescue on Ryloth.” I liked it a little less than “Devil’s Deal,” but I think the two episodes work best as a back-to-back deal.