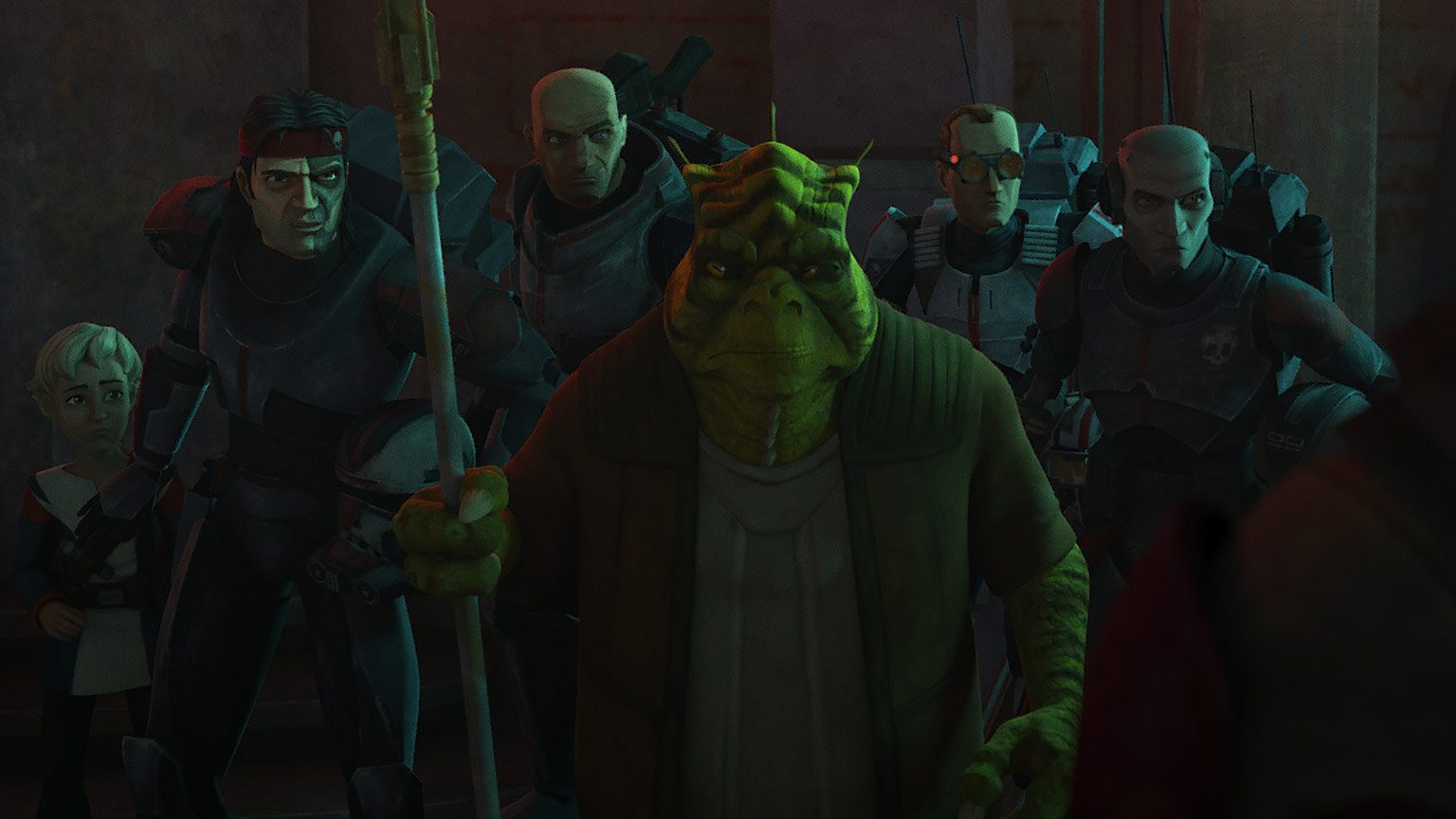 In “Infested,” the Batch returns to Ord Mantel to find Cid replaced by a newbie named Roland. The guys want to collect supplies and split, but Omega insists on finding and helping Cid. They find her waiting for them on their ship. Cid has a plan to steal a shipment of spice and sabotage Roland’s business relationship with the Pyke Syndicate. They infiltrate the transportation system and come face-to-face with large, insectoid creatures. In the scuffle, they drop the spice, but they escape in one piece. Roland leads the Pykes to Cid, and the guys are forced to leave Omega with them while they reclaim the spice. The spice is traded for Omega, and the Pykes are going to kill Roland, but Omega, who has spent the episode imprisoned with him, pleads for his life. Cid reminds them that Roland’s mother is a powerful crime boss, and killing him could cause a war. They cut his horn and leave as Cid takes her place back.

“Infested” continues to endear Cid to the Batch, especially Omega. We previously saw the two bonding in “Common Ground,” when Cid had to babysit Omega to keep her safe from the guys’ mission. I like Rhea Perlman fine in general, but Cid’s snarky, rough personality doesn’t impress me. From her first episode, “Rampage,” I found her annoying and dull until she started to care about Omega. She could be an interesting foil for Hunter; he wants to keep Omega safe first and foremost. While he isn’t ready to join the Rebellion, he clearly has an idea that the Empire is doing bad things. On the other hand, Cid doesn’t care about any of that, at least at first. She just wants to make a buck no matter what. She takes jobs with Confederate planets and Republic planets alike, with no regard to sides or morality. In a way, Cid is right, too. With the Empire in place, it makes no difference which side these planets were previously on. “Common Ground” and “Devil’s Deal” made it painfully clear how occupied worlds would be treated, regardless of their status during the war. I also wonder if Cid will continue to become more sympathetic as her fondness for Omega and the others develops.

The character of Roland Durand looks a lot like Cikatro Vizago, a crime boss who appears in Rebels. The resemblance is uncanny once his horn is severed by the Pykes, aside from differences in animation style. He doesn’t have Vizago’s accent, though, and I wonder if Dave Filoni and the story group would even want to tie in such a minor character. However, they’ve already gone to great lengths to set up characters and story elements from Rebels, so I don’t think it’s out of the question. Hera dropped her accent by the time she was an adult, and Kanan went by a pseudonym for most of his life. So, it may be reaching, but I’m not convinced this is a coincidence. Maybe Roland would even change his name to avoid being noticed by the Pykes; they told him outright that it would be unwise to cross paths with them again. I liked that Omega cut Roland some slack because Ruby, a weird-looking bird Cid sold him, took a liking to him. They say animals have good instincts about whether people are good or not, and I definitely judge people if my pets don’t like them. This wasn’t hugely impactful, but I thought it was a nice touch.

“Infested” does represent a step back for The Bad Batch, unfortunately, at least in my eyes. I really enjoyed “Devil’s Deal” and “Rescue on Ryloth” because, while they prominently featured Clone Wars and Rebels characters to the extent of retroactively setting Hera up for Rebels, they felt impactful. Even if Roland is Vizago or somebody else who will be important later, I don’t understand the value of “Infested” to the overall story. I guess it’s good that Omega convinced the guys to help Cid, but she seems to do that a lot. Omega cares about everybody and always wants to help, and Hunter is reluctant but easily won over by her pleas. It’s a tad repetitive at this point, and I’m not sure it serves either character well to constantly replay this exact scenario. It was also weird when Hunter asked Omega why she spoke up for Roland; this is completely in character for her. If anything, it’s weird (and counterproductive) for Cid to stand up for him after what he did to her.

Maybe the formula is just wearing thin or becoming too obvious because I actually didn’t mind the side-quest type episodes of The Mandalorian. I’m still enjoying The Bad Batch overall, but I think it started out strong and has become something of a mixed bag. Even with the introduction of new characters and growth (if you can call it that) for someone like Cid, “Infested” feels inconsequential in the grand scheme of The Bad Batch or Star Wars as a whole. It’s frustrating to get such a random side story after the last two episodes, which were interconnected and had such an open ending. They set up an encounter with Crosshair, which I’m sure is still coming, but it would be nice for that to have had some bearing on “Infested.” However, the animation, voice acting, and music by Kevin Kiner are still top-notch. I want to watch the episode again just to get a better look at the giant bugs the Batch contend with in the cave. This is an engaging action sequence which was welcome amid awkward exchanges and laborious character interactions. The artistic aspects of the show and its direction are always on point. It’s just a shame they have to carry the episodes in cases like this.

“Infested” might be my least favorite episode of The Bad Batch yet. It’s an especially disappointing venture following “Devil’s Deal” and “Rescue on Ryloth.” I had hoped for more connected episodes leading up to the season finale. “Infested” isn’t entirely without merit, but I don’t see myself revisiting this one on rewatches.

"Infested" might be my least favorite episode of The Bad Batch yet. It's an especially disappointing venture following "Devil's Deal" and "Rescue on Ryloth." I had hoped for more connected episodes leading up to the season finale. "Infested" isn't entirely without merit, but I don't see myself revisiting this one on rewatches.