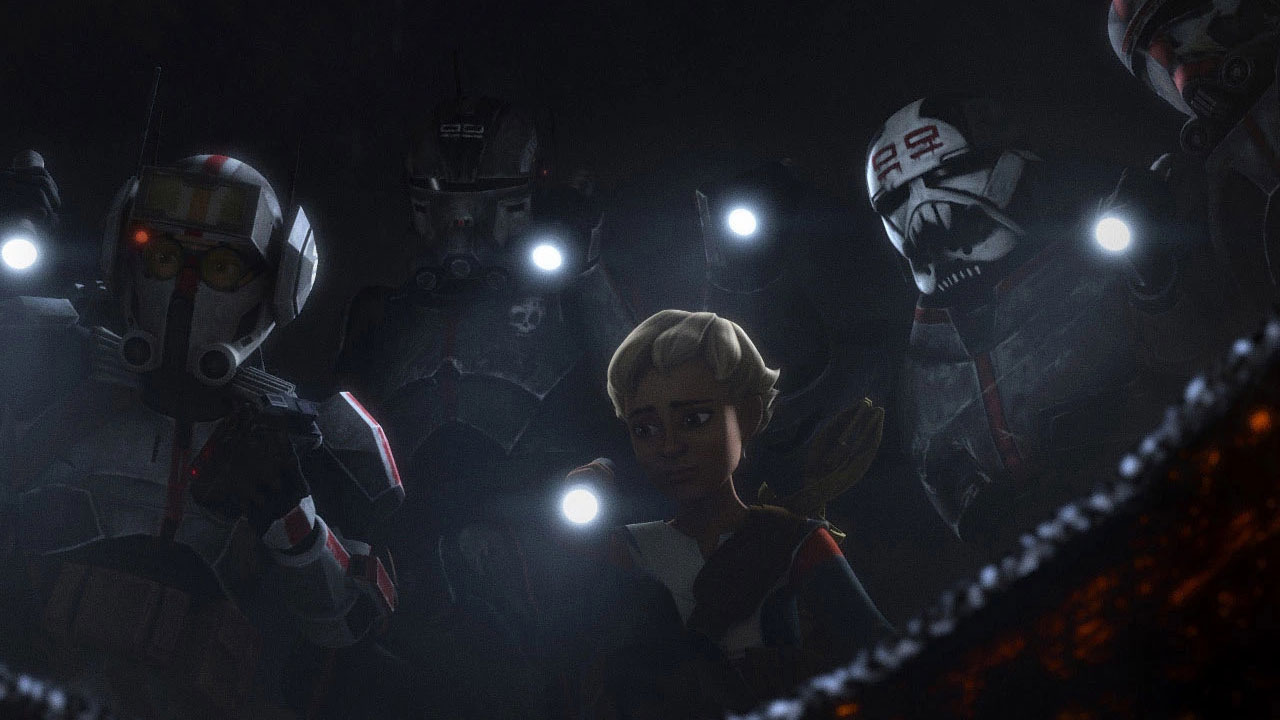 In “Kamino Lost,” Admiral Rampart looks on in indifference as his fleet rains fire on Kamino. Buildings are destroyed one by one, plummeting Omega and the Batch into darkness. Omega and Crosshair end up separated from the group in a flooding room. AZ wakes Omega in a panic, and she finds that Crosshair is stuck under the wreckage. She calls Hunter on comms, and before long, Wrecker is cutting his way through the barrier separating them. Crosshair is submerged as Omega struggles to free him with AZ’s help. After Crosshair is cut loose, Wrecker breaks through the door, reuniting the Batch. Hunter and the boys make a break for it, and he tells Crosshair he can go with them or stay and die if he wants.

Omega has an idea to use the underwater tube system to get back to the Marauder. Everyone else concurs, frustrating Crosshair, who doesn’t think Omega should make such big decisions. A sea monster attacks the tube, but AZ activates the power, shocking it and scaring it away. However, in doing so, he also depletes the system’s remaining power. The Batch makes it into Nala Se’s lab, and Tech reveals that Omega was there when the guys were created. Despite being a child, she’s technically older than the Batch. The guys end up trapped yet again, unable to reach the Marauder. Crosshair blames Omega’s leadership to Hunter’s reply that Omega has already done more for him than the Empire has or will. Crosshair goes off on his own, and Omega follows, telling him she knows how he feels about Nala Se’s lab. She expresses disappointment in discovering that this was his personality at work, not the chip all this time. The Batch all climb into protective pods, and AZ guides them to the surface of the water. Omega’s pod is overtaken by debris and sinks, but AZ cuts through it, sending her upwards. AZ’s battery dies, prompting Omega to go after him. Crosshair makes a perfect shot, sending a harpoon to AZ and Omega and pulling them to safety. Hunter and Omega each try to talk Crosshair into joining the Batch. He remains unmoved, waiting alone on a decimated planet. Meanwhile, Nala Se and her troops arrive at an Imperial facility.

As the final episode of season 1, “Kamino Lost” has a lot to prove. This season has been a trial run for characters we barely met in The Clone Wars, the relatively untouched post-war period of Imperial expansion, and the intuitive but naive Omega. As such, “Kamino Lost” needs to follow up on these threads in a way that satisfies the season’s various setups while still leaving the door open for the already-announced season 2. It mostly succeeds as an episode and a finale, but I have a couple of issues that are, unfortunately, kind of a big deal. For one thing, despite being full of perilous situations and taking place in a city in the process of being destroyed, “Kamino Lost” doesn’t have much tension. I was never in fear for any of the characters except AZ; I actually thought he would sacrifice himself to save Omega. That’s what he was attempting until Omega busted out of her pod, after all. But we all know getting captured in “War-Mantle” was as far as it would go for Hunter. I doubt anybody was genuinely worried for Omega or Crosshair, much less Wrecker, Tech, or Echo. The first three form the emotional crux of the show, and I’m not sure how much they could do without any of them going forward.

Meanwhile, Wrecker is too childlike and innocent for me to picture him dying, especially so early on. Tech and Echo have hardly been explored throughout this whole season, so it would seem a waste to kill either of them. It also wouldn’t be as emotional, especially if it was Tech. We learned a decent bit about Echo in The Clone Wars, but since he’s part of the principal cast in The Bad Batch, it would have been great to learn more about him. Aside from his physical deformity and righteous indignation at the idea of slavery, how did his captivity on Skako Minor change him? What does he think about his new brothers and being considered a “defective clone” (even if it’s not true)? This is where he belongs now, but does he miss being a reg with Rex and the others? Does he have nightmares about Skako Minor like Tup implied he did about Order 66? Tech and Echo have been sorely neglected this season, which is another problem I have. That’s more with the season as a whole, but “Kamino Lost” being the season finale magnifies the issue. I don’t think anybody needed to die to create tension, but the actual threat of harm would have helped. I actually think this would have worked a little better if they released “Return to Kamino” and “Kamino Lost” together. I said the same thing about the Ryloth episodes, but splitting them up just shuts down all momentum. I assumed they would escape at the end of “Return to Kamino,” so much of “Kamino Lost” just feels like filling time with meaningless obstacles and problems.

Despite all that, there’s a lot I enjoyed about “Kamino Lost.” Despite what I just said, Tech got one great moment in this episode where he explains to the others that Crosshair has always been this way. This comes after prodding from Omega and an outright confrontation with Wrecker, who calls Crosshair out for making no effort at reconciliation and says they would take him back even still. When Crosshair asks why he defended him, the always analytical Tech tells him that understanding doesn’t mean he agrees with him. The back-and-forth between Crosshair and his former family is great throughout “Kamino Lost,” and probably my favorite aspect of the episode. I’m actually happy with how things worked out, too, with the Batch being forced to leave Crosshair behind again, this time by his own choice. There’s an innate sadness in the dynamic of Crosshair and Hunter’s diverging beliefs. Seeing Crosshair standing alone on a barren planet reminded me of a scene in “Replacements” where he sat alone in the Imperial barracks. He’s created this situation for himself (unless he really still has his chip, which may be the case). However, it’s still depressing to see anyone so utterly lonely.

I hesitate to make this comparison, but I got Zuko vibes from Crosshair in this finale. I’ve been waiting for him to either die or rejoin his brothers. But in “Kamino Lost,” he refuses both, continuing an isolated existence in service to people who don’t care about him at all. Zuko from Avatar: The Last Airbender is one of my favorite fictional characters and experiences the best redemption character arc I’ve ever seen. At the end of Book 2: Earth, he stuns the audience (and the other characters). He continues on his path of violence and anger, all while insisting that he has indeed changed. Crosshair reminded me of this because, while he’s not as well developed (at least not yet), his choices are similar. He’s doing what he thinks is right, and much like Zuko, he’ll probably have to learn the hard way that his masters aren’t his friends. I also loved the scene where the Batch had to trudge through their old room, highlighting how sanitized and unrecognizable it is now.

Similarly, the scene where the clone trooper informs Admiral Rampart of the success of the Kamino attacks is genuinely sad. Dee Bradley Baker gets endless praise from me and others for his ability to craft distinct voices and personalities for innumerable clones, but he deserves it! This may be the only time we see/hear this clone, but I really felt for him. However ambivalent the clones may feel about Kamino, that’s the only home they ever had, and it’s gone now. Nothing lives there; nothing will grow there anymore. It’s just an eyesore pile of dirty water and smoldering ash, the breeding place of a senseless war with one winner and a galaxy full of losers. The animation and Kevin Kiner’s music again earn big props in “Kamino Lost.” Visually, the abandoned, creepy hallways of the Kamino facilities in “Return to Kamino” were the quiet before the storm of “Kamino Lost” and its explosions and plummeting buildings. This is beautifully highlighted in Kiner’s score, which appropriately bounces back and forth between fearful adrenaline and the melancholy of a long-expected farewell. 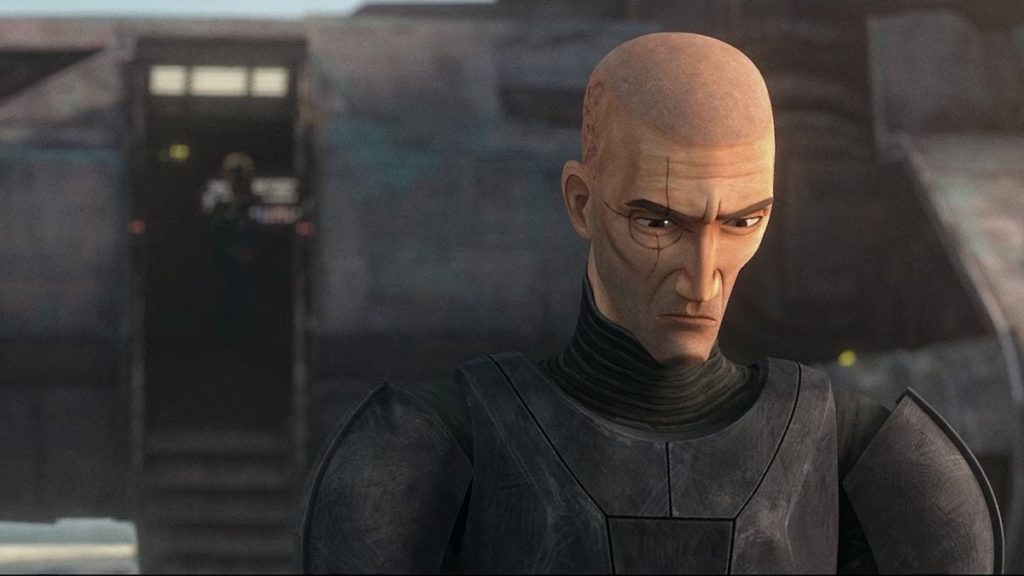 I enjoyed “Kamino Lost,” and overall, I liked season 1 of The Bad Batch quite a bit. This season has had its rough spots, but I think it works better than season 1 of The Clone Wars or Rebels and handles its child protagonist better than either of those shows did at first. I love Ahsoka and can appreciate Ezra, but even their biggest fans admit they started out grating. I would like to see more balance with Omega and the rest of the Batch in future seasons, but she isn’t infallible and struggles with her energy bow and strategic decisions. Hunter, Wrecker, and Crosshair have all been handled very well, and I hope we get more exploration of Echo and Tech in the future. The animation, voice work, and music in The Bad Batch are unbeaten within the realm of television animation. I’m just so glad more seasons are coming. I think improvements can be made as the show goes on, but many shows (even the best ones) struggle to come into their own when they first start. The Clone Wars peaked around season 3 and Rebels near the end of season 2, so I’m more than willing to be patient for a show with such a satisfactory first season. I liked it, I want to see more, and I eagerly await season 2.

"Kamino Lost" is visually beautiful and relentlessly sad. It needed more tension and to balance the characters better, but it's a good endcap to an above-average season.

Disney sucks but the ending was interesting in that they took Weirdo Long Neck Scientist Lady or Man or Bird or whatever it is to a lab planet place and told her they had a lot of work for her to do which makes me wonder if they ‘re going to have her try make Snoke or Palpatine clones or what. I agree the Sequel Trilogy sucks but I am still intrigued with imagining stories and connections despite Disney destroying everything. Oddly enough, I’m still watching this cartoon. The previous cartoon, the one after Rebels, I’ve stopped watching after only a few episodes.

I agree about the sequels but I’m ready to move on from them. I’m just glad the TV series have been good and want to forget about the sequels. I completely agree about Resistance, that was trash and I’m pleased The Bad Batch has been so much better. Thanks for reading and responding!

I have to say I wasn’t huge fan of Bad Batch. I was really disappointed. Granted, maybe because after The Clone Wars and The Mandolorian, I had very high expectations, but honestly, the show felt just like a bunch of boring side-quests. I loved the beginning of Order 66 and the return of Cad Bane, but other than that, the show really dissapointed me.