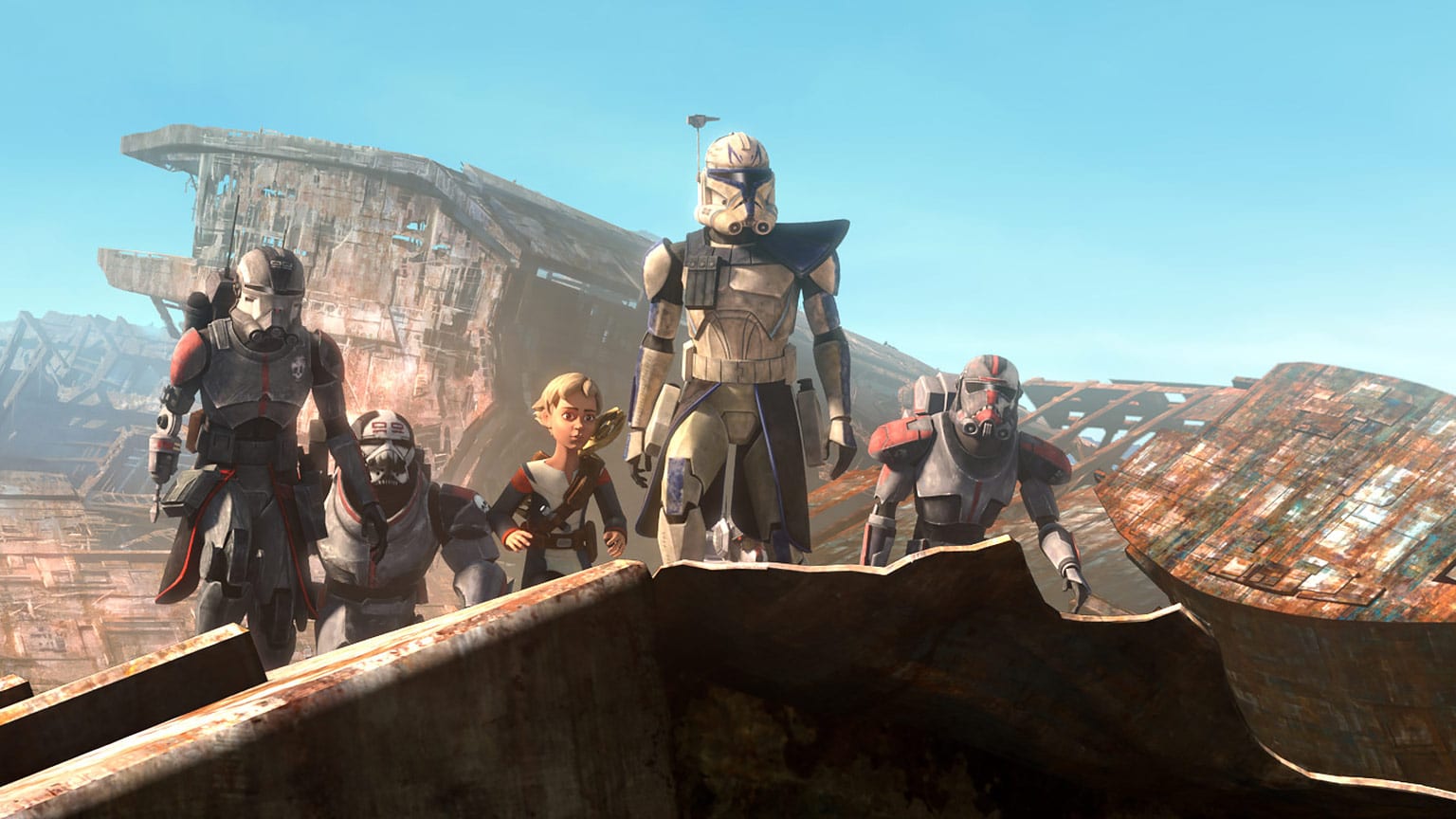 “Battle Scars” opens with the guys dodging a fleet of pirates, having stolen a lizard from them. Cid gives the Batch a hard time about losing the tactical droid, as well as all the charges they’re racking up around town. The episode then sees the glorious return of Captain Rex as a hooded figure reveals himself to the Batch. It’s a happy reunion at first, but Rex is troubled by Wrecker’s headaches, insisting the guys remove their inhibitor chips immediately. They all agree to rendezvous at an abandoned ship, seemingly the one Ahsoka and Rex crash-landed in after the Siege of Mandalore. Although the med bay is no longer sterile and fully functional, it’s their best bet to perform the surgery.

After some trouble getting into the facility, the guys get Wrecker on the table. But just as the machine prepares for the operation, Wrecker’s chip kicks in, and he goes into attack mode. He fights Tech and chokes Hunter until Omega lures him away. She tries to appeal to his better nature, but he can’t control the chip, and Rex has to stun him. Omega stays by Wrecker’s side until he awakens. When Wrecker ultimately wakes up, he apologizes to Omega, but she understands that he couldn’t override the chip. Omega simply offers Wrecker some of his favorite snack and declares the mission over. Rex tries to talk Hunter into joining the Rebellion but understands when he says he has to look out for Omega and the guys. They say goodbye, and each offers to help the other any time. Shadowy figures see the exchange and notify the Empire.

“Battle Scars” is the episode many of us have been waiting for. It answers the question of who the Martez sisters contacted in “Decommissioned,” and we finally see the return of fan-favorite clone Captain Rex. I was excited when they showed his iconic armor in the show’s trailer, but I didn’t expect to see Rex so soon. If anything, I thought the Martez sisters were in contact with Ahsoka, and we would see Rex in the season finale. Perhaps it will be the other way around, but that could also be my wishful thinking talking. I know some think characters like Ahsoka and Maul have become over-saturated within the franchise, and that’s certainly a valid point. But Ahsoka, in particular, is one of my favorite Star Wars characters, and I’m always happy to see her. I kind of assume we will be seeing her in The Bad Batch sooner or later, especially now that the show has featured Rex and the Martez sisters. “Battle Scars” also offers confirmation that Trace and Rafa were telling the truth about needing the intel for a good cause and also that the Batch only had that one copy. I think it’s unfortunate that the Batch gave up their big score entirely, missing out on the payoff and angering Cid in one fell swoop. However, that makes what Hunter did an even more impressive gesture to the Rebels. No wonder Rex wanted to recruit the boys for the cause. I think it’s a good narrative decision to show Rex resisting the Empire right out of the gate. He’s not the “wait and see” type. And now, Filoni has an interesting opportunity to explore what brings Rex from his position in the early Rebellion to where we find him in Rebels; old, complacent, and in hiding with his brothers.

I also think it’s wise to have Hunter decline the offer from Rex, especially so early. I could see the Batch joining or at least helping the Rebellion down the road, but we’ve had shows and movies about the Rebellion already. I like the shady world the Batch exists in, blurring the line between right and wrong to protect themselves and support Omega. I’m sure we’ll see Rex again this season, maybe in the finale. I doubt Hunter’s offer of help will go unaccepted for long. One thing I found strange was that Rex was surprised the Batch hadn’t removed their inhibitor chips yet. Most of the clones don’t know about them, and he saw his brothers go into attack mode on Ahsoka. It’s understandable for Rex to be more than a little shaken by his experiences, but I would think he would go in expecting them to need their chips removed.

Regarding the meat and potatoes of the episode, Wrecker’s chip activating was terrifying. I think this plot point took too long to set up, but they play it to perfection in “Battle Scars.” They take the most lovable, childlike member of the team and turn him into a killing machine. He turns on his brothers instantaneously and even attacks Omega. This works all the better since we’ve seen Wrecker and Omega bond. I’m glad that Omega’s pleas to Wrecker’s humanity don’t work; that would have been a little convenient. Even Rex couldn’t resist the chip for long with Ahsoka there, and he’s watched her grow up. On that note, I liked the moments where Rex would observe the guys interacting with Omega. I got the feeling he was remembering his time with Ahsoka in the glory days of the Republic. Rex is one of my favorite characters from these shows, and it was nice to see him again.

I’m really just glad we got a big plot episode after the recent run of filler. I don’t mind filler in small amounts, but The Bad Batch was beginning to test my patience on that front. If I have one big gripe with “Battle Scars,” it’s that I wish we got an update on Crosshair, Tarkin, and the Kaminoans.  I’ve really missed that whole storyline; it added tension to the Batch’s exploits, and it was genuinely interesting. We don’t know a lot about the Empire during this time or the breakdown in relations with Kamino, and I found that compelling. I also thought Crosshair would be a major villain in this show, granted they could always have more of him later on. Overall, I really enjoyed “Battle Scars,” and it’s an improvement over the last couple of episodes.

"Battle Scars" is an improvement over the last few episodes of The Bad Batch, advancing the season's plot after a few weeks of filler, though it leaves the Empire behind a bit too much.