"Hunter, we're soldiers. What other path is there?" 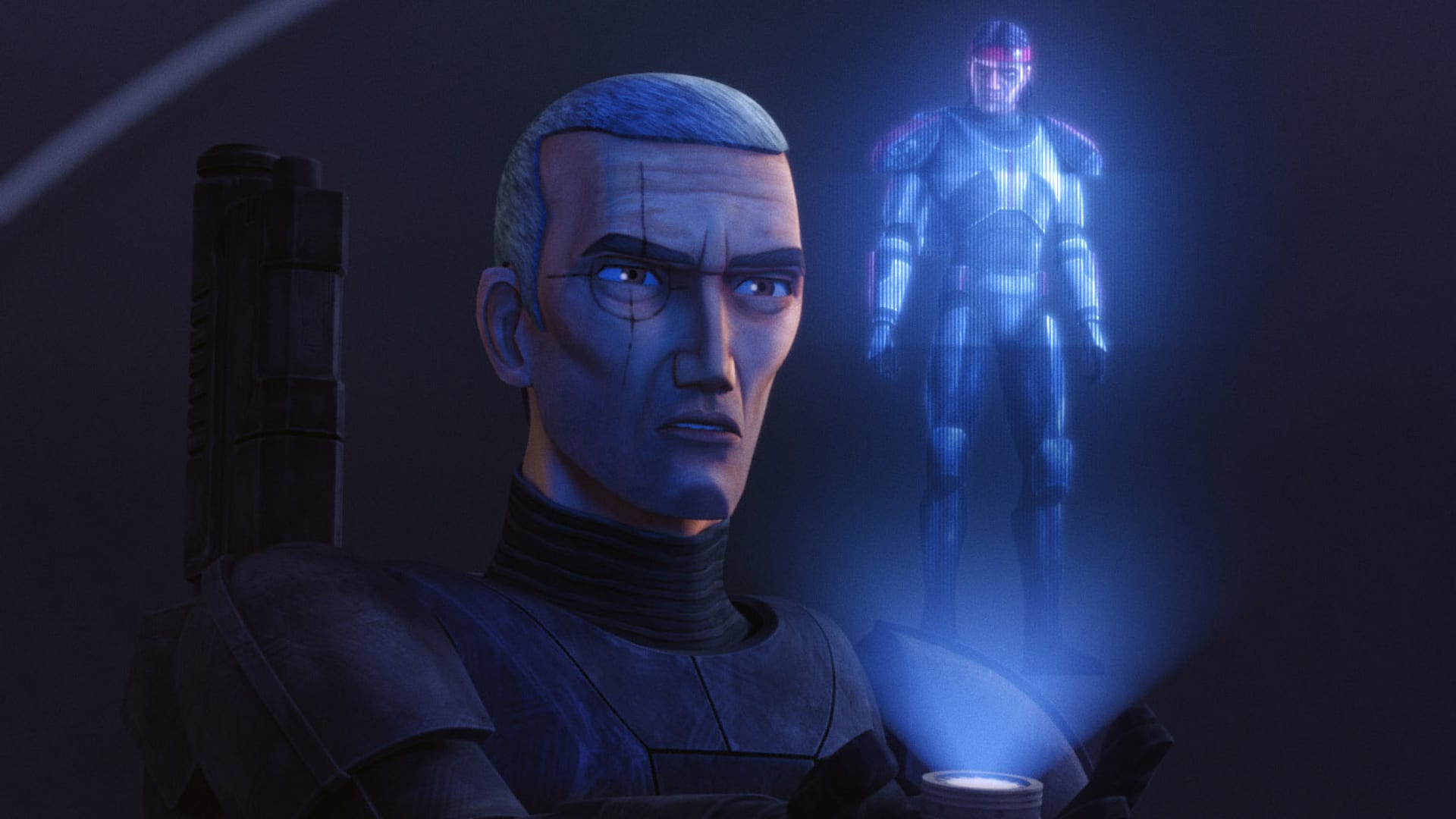 “Reunion” finds the Batch scavenging for parts and supplies to sell after Rex leaves them. Wrecker trains Omega to deactivate bombs, and she fails, but it proves to be a harmless smoke bomb. The Batch starts the ship’s engine, which attracts the attention of Crosshair and his troopers. Tech hacks into Crosshairs’ comm signal, and the Batch uses the Intel to avoid them at first. They try to escape through the engine, but Crosshair fires it up, and the Batch has to run. Crosshair isn’t their only problem, though: the bounty hunter Cad Bane shoots Hunter and takes Omega. When Hunter wakes up, the guys are there, and they all agree to find Omega.

We have another guest appearance in “Reunion,” following Rex’s return in “Battle Scars.” I wasn’t necessarily expecting to see Cad Bane again, and so soon, but I was hoping we would. I’d like to see the planned story where he would have gone up against Boba Fett in The Clone Wars. I think Filoni will probably use The Bad Batch to explore some of those narrative roads not taken. There were entire story arcs that got axed when Disney canceled the show. Tonally and stylistically, The Bad Batch feels like an extension of The Clone Wars in ways the other Star Wars animated series haven’t, so it makes a lot of sense to pick up with characters and stories that weren’t completed in that series. The brief shootout between Hunter and Cad Bane is framed similarly to the one that was planned for Bane and Fett. That’s a cool callback for people who saw the animatics for the unfinished Clone Wars episodes. I imagine they’re going to have Bane run into Boba Fett at some point, perhaps in The Bad Batch or even The Book of Boba Fett. Either way, Clone Wars fans are eating good for the foreseeable future. It’s entirely possible that Bane will return Omega to the Kaminoans, and that’s the last we’ll see of him for a while, and I’d be okay with that. But if the Batch caught up to him and they clashed again, that would be cool too. He’s a more than capable fighter, as we saw here and in The Clone Wars, but taking on the whole Batch would be more of a challenge. I think the way they did Bane’s cameo was just perfect, too; his voice is so distinctive that we know who is speaking before we even see his face. I hope Filoni and the crew have bigger plans for Cad Bane down the road. 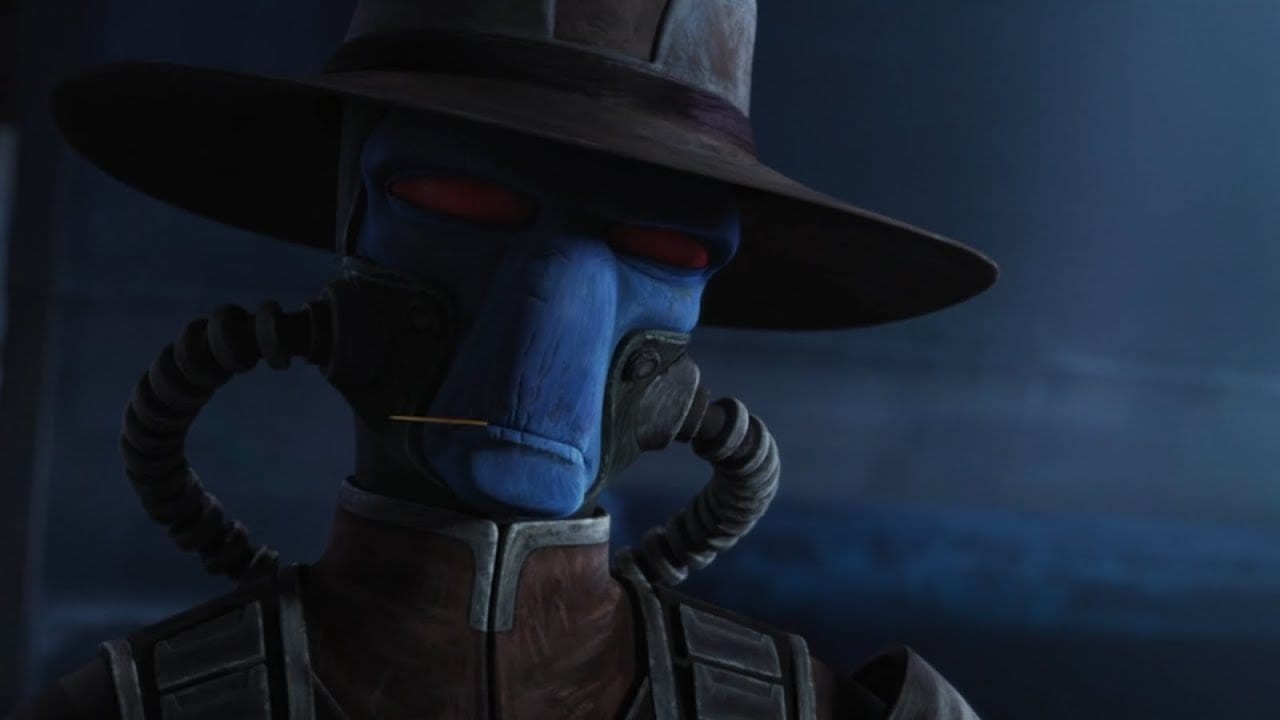 “Reunion” also confirms that the Kaminoans are indeed the ones with a bounty out on Omega. I doubt this will come as a surprise to anyone, but now we know for sure. I was glad to see the return of the Imperial/Kaminoan subplot in “Reunion.” I love Omega and the dynamics among the Batch, but Crosshair and the tension between Kamino and the Empire was the most exciting aspect of the show’s first few episodes. Crosshair is an excellent adversary in this episode; the utter disregard he shows for his brothers and the life of a little girl is chilling. At the end of the episode, before Hunter encounters Cad Bane, Crosshair is badly injured and seemingly burned on his face. It’ll be interesting to see how this plays out and if it affects his inhibitor chip at all. It seems like the trauma, or maybe even the heat he was exposed to, could potentially cause the chip to malfunction. I also liked that Crosshair anticipated Tech hacking into his signal and used it to his own advantage. Crosshair knows these guys intimately and seems smart in his own right, so it only makes sense for him to be a step ahead in this regard. The Batch as a group is seriously nerfed by Crosshairs’ absence, and this is a taste of his brand of critical thinking. In “Reunion,” we even see how Tech, while still very smart, is limited in his way of thinking. He answers Omega’s questions very literally, explaining the general mechanics of the war he took part in rather than telling her how it felt. This also ties back into “Rampage,” when he gave her a literal definition of slavery in contrast to Echo’s moral examination of the subject. In addition to being an excellent marksman, Crosshair was also the team’s strategist. They’re clearly still in need of his particular skills.

I must sound like a broken record, but I’m continually impressed by this show’s animation. The dimly lit scenes inside the ship on Bracca exude a foreboding atmosphere before we or the characters know Crosshair is there. The shootout at the end, while brief, is intense, and the foggy air somehow makes Cad Bane look even more intimidating. The voice work in “Reunion” is as strong as ever, with Dee Bradley Baker carrying the episode as usual. It never ceases to amaze me how many distinct clone voices he can do, and how he always keeps them separate in his head. Michelle Ang brings a believable innocence to Omega. Her chemistry with Hunter and Wrecker is really what makes the show work. She still needs some more interaction with Echo and Tech, which I imagine will come soon after she is rescued from Kamino or Bane. Kevin Kiner’s score is powerful in “Reunion.” I particularly liked it when the guys were inside the ship, and a dark, sad-sounding version of the show’s main theme played. It reminds me of how he would experiment with variations on themes from the original trilogy in The Clone Wars. Even if you don’t notice it, this can bring up memories and feelings to set up expectations for what’s to come or create dread. Kiner doesn’t get enough credit for his work on these shows.

Overall, I loved “Reunion.” It’s probably my favorite episode since the premiere. This episode continues to bring the main story back to the forefront after the wonderful “Battle Scars.” The return of Crosshair and the Kamino storyline also brings much of the tension I’ve missed the last few weeks. I loved seeing Cad Bane again, and his appearance was handled very well. I look forward to seeing how the Batch gets Omega back, what happens with Crosshair, and what Filoni has planned for Bane in the long run.

Overall, I loved "Reunion". The return of Crosshair and the Kamino storyline brings much of the tension I've missed the last few weeks. I loved seeing Cad Bane again and his appearance was handled very well.