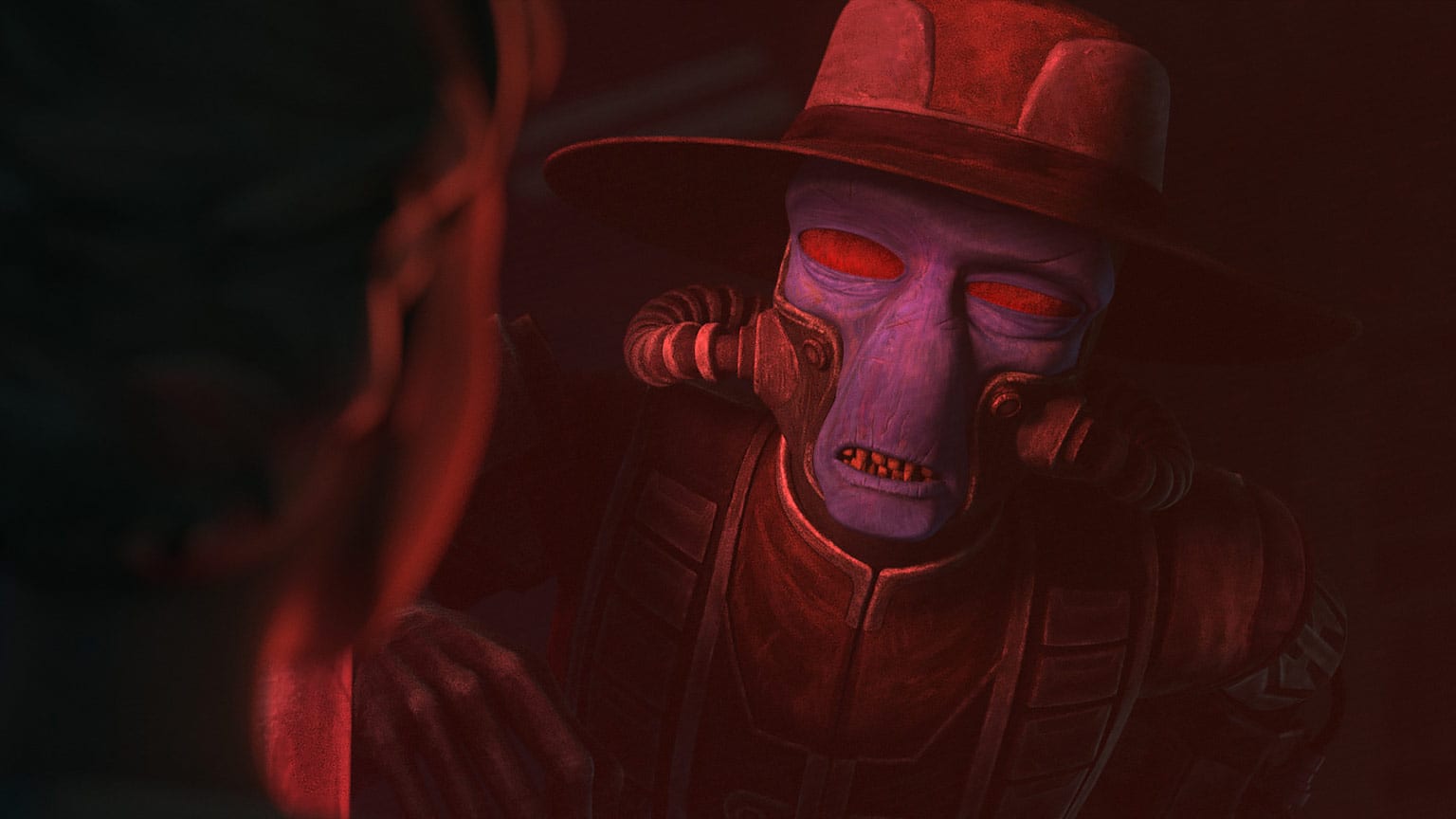 “Bounty Lost” finds the Batch searching for Omega and evading Crosshair and his troopers. Unable to detect Cad Bane’s ship, Hunter makes the difficult choice to jump to hyperspace and escape Crosshair. Meanwhile, Cad Bane and the Kaminoans agree to meet up and exchange Omega for the bounty. Nala Se volunteers to make the trade, but Lama Su chooses Taun We. He remarks that Nala Se’s personal involvement with Omega had jeopardized their plans enough. Back on Bane’s ship, Omega tricks his droid into releasing her and knocks him out. When the ship lands, she runs away and establishes communication with the Batch. However, Bane soon catches up to her and smashes her comm device/tracker. Taun We is killed before the exchange can be made, and Fennec Shand emerges with guns drawn. She suggests Bane trade her the girl for the money from Kamino, but Bane’s droid takes the money out of her hands. A shootout ensues as Omega finds a lab and sends her coordinates to the Batch. The Bounty Hunters find Omega again but remain distracted by each other. Omega finds an escape pod and shoots herself into the atmosphere. The Batch finds Omega, and Hunter explains that the Kaminoans are after her because she’s the most valuable clone due to her uniqueness. Nala Se contacts Shand, telling her not to pursue the Batch. She says as long as Lama Su doesn’t have Omega, all is well, and Shand will receive her payment.

“Bounty Lost” is absolutely riveting from start to finish. This was one of the most unpredictable TV episodes I’ve seen in a while, too. The shootout and competition between Cad Bane and Fennec Shand was pure adrenaline, and I genuinely couldn’t tell how it would turn out. Bane has the experience on his side and seems nigh-invincible; this guy stood up against the likes of Obi-Wan Kenobi in The Clone Wars! But Fennec Shand has proven to be more than capable both in The Mandalorian and here on The Bad Batch. The two consistently one-upped each other during this encounter, and I loved every minute of it. I still hope and expect we’ll see Bane come up against Boba Fett like Filoni originally planned for The Clone Wars, but this was really cool. These are not two characters I would have pictured fighting or even meeting. But, much like Maul and Ahsoka in season 7 of The Clone Wars, I’m glad Filoni did envision it.

One of my favorite things about “Bounty Lost” is the throughline of Nala Se and her concern for Omega. We’ve seen bits of this throughout the season, including in “Aftermath,” when she allowed the Batch to escape with Omega. I’m not sure what’s going on here; does she love Omega like her own kid? Does she have so much pride in this creation that she just doesn’t want her destroyed? Does she simply have her own purposes for Omega that clash with Lama Su’s desire to maintain ties with the new Empire? There are so many things they could do with these characters, and I can’t wait to see them. Early on in “Bounty Lost,” when Lama Su instructs Taun We to kill Omega after extracting her DNA, Nala Se looks noticeably distressed but says nothing. The reveal at the end of “Bounty Lost” that Fennec Shand has been working for Nala Se specifically and not Lama Su is absolute dynamite. This is such a satisfying payoff because it comes as a shock but makes perfect sense in retrospect. If Nala Se is so worried about Omega’s fate, of course, she would hire her own bounty hunter to protect her. Omega being brought back to Lama Su on Kamino would endanger her life and obviously Nala Se’s work and/or relationship with the girl.

I love how the mystery of Omega’s birth and greater purpose is panning out so far. This week, we didn’t get anything with Tarkin and Rampart on the Imperial side of things, but the story in “Bounty Lost” is so good I didn’t mind. Knowing that Fennec had a separate and contradictory mission to Bane’s adds complexity and excitement to an already complicated situation. This also explains why Shand allowed Omega to escape and focused solely on Bane. I thought this was the usual villain stupidity/distraction to let her get away. But knowing that Shand did this on purpose and only wanted to protect Omega shines a new light on things.  I still assume we’ll see Boba Fett vs. Cad Bane at some point, and I’m looking forward to that as well.

My one complaint is with the explanation that Omega is a perfect clone of Jango Fett, or however that was worded. If they come back to this topic, and I assume they probably will, it isn’t necessarily a flaw. It could be part of the setup for a bigger reveal. But I don’t see how Omega can be a true clone of Fett without alterations or additional DNA from someone else – firstly because she’s obviously female, unlike Jango and the regular clones, but also because of whatever special abilities she seems to have. It looks like she either has the Force or simply heightened senses, the latter of which I prefer and seems more likely. For the time being, this is more of a concern than a real flaw with the show. I’m willing to bet Filoni has more answers about Omega coming as the season continues to unfold.

Naturally, the animation in “Bounty Lost” is gorgeous and fluid, as always. The chase and fight scene with Omega, Cad Bane, and Fennec Shand is visually appealing and gives the episode a boost of energy.  Kevin Kiner’s musical score continues to compliment this show extremely well. And, of course, the voice acting in this show is top-notch every week. Ming Na-Wen as Fennec Shand and Corey Burton as Cad Bane play off of one another very well. Michelle Ang gives Omega more vulnerability than usual in “Bounty Lost,” particularly when she asks Hunter why the Kaminoans want her back so badly.

Overall, “Bounty Lost” is an excellent episode of The Bad Batch. It’s tense, visually interesting, and continues to build intrigue around Omega, Nala Se, Fennec Shand, and the overall story. This is one of my favorite episodes of The Bad Batch so far.

Overall, "Bounty Lost" is an excellent episode of The Bad Batch. It's tense, visually interesting, and continues to build intrigue around Omega, Nala Se, Fennec Shand, and the overall story. This is one of my favorite episodes of The Bad Batch so far.