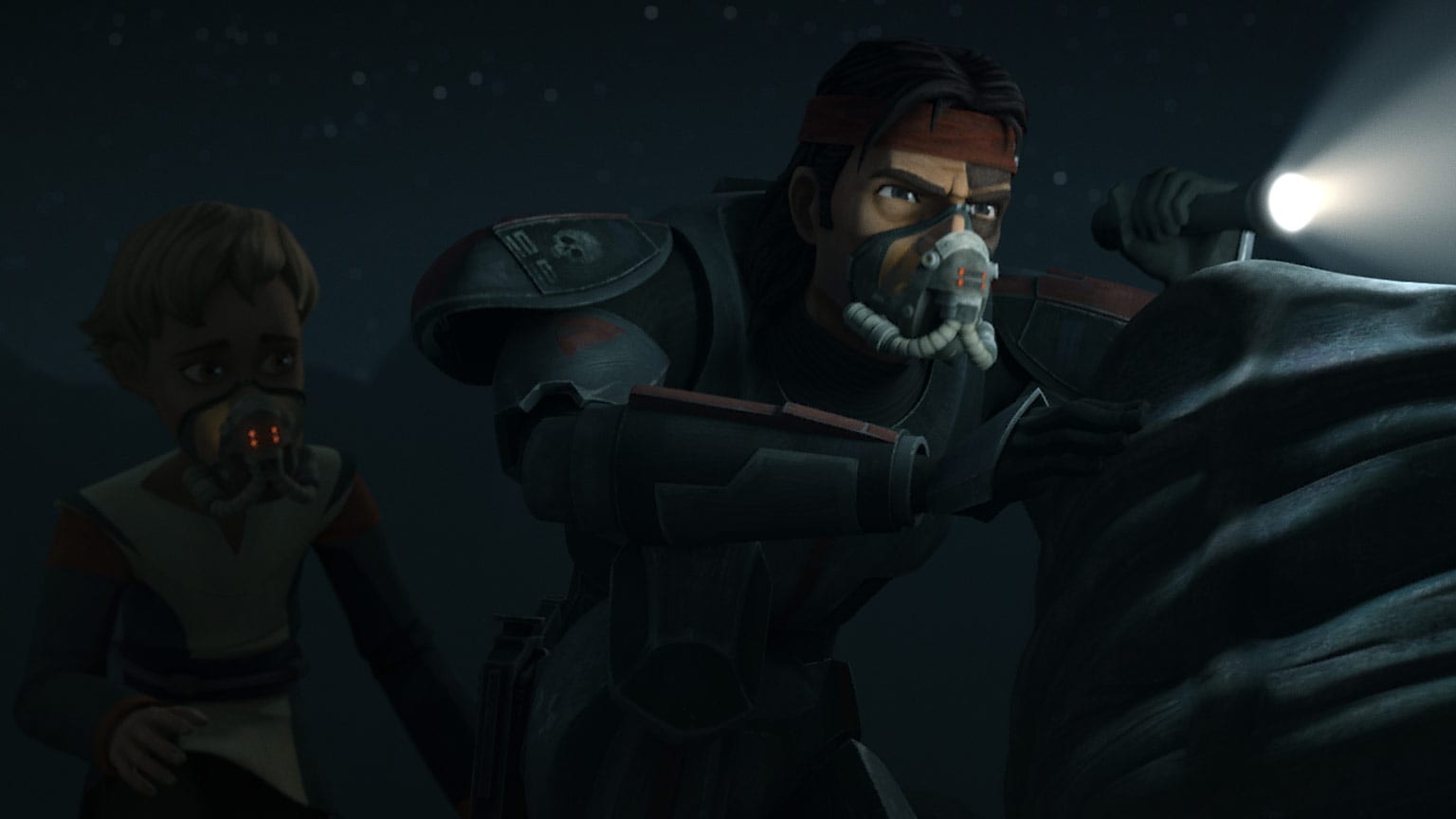 The Bad Batch is off to a great start with the episodes “Aftermath” and “Cut and Run.” With today’s third episode, “Replacements,” Omega takes a more active role within the Batch as Imperial progress marches ever forward. After last week’s slower, character-oriented episode, “Replacements” throws us right back into the action. The episode’s title is a clever double-entendre for the replacement part the ship needs and the new recruits being the clones’ replacements.

As everyone adjusts to having a kid around, Tech creates a device to test the functionality of the Batch’s inhibitor chips. Something goes out in the ship, causing it to crash land on a strange planet. Omega stumbles upon Crosshair’s weapon kit, prompting Wrecker to say he misses him. Tech mentions that Crosshair could have been influenced by his inhibitor chip when he turned on them. Meanwhile, on Kamino, Crosshair is conditioned yet again as Tarkin discusses a new project: recruiting soldiers to be trained by clones. Wrecker has headaches as a wild animal snatches the replacement part the Batch needs to repair the ship. Tarkin plans to send the new recruits and Crosshair to Onderon to dispatch Saw Gerrera’s band of Rebels. Omega encourages Hunter not to blame Crosshair for his actions under the chip’s influence. On the way to Onderon, one of Crosshair’s recruits questions his status as commander. Hunter and Omega find the replacement part and the creature that took it. When Hunter tries to take the part, he’s attacked by the animal and knocked unconscious when his oxygen mask falls off. On Onderon, Saw is nowhere to be found. One of the recruits pushes back on Crosshair killing the civilians, so Crosshair kills him too for noncompliance. Omega puts Hunter’s mask back on and finds the part. The creature feeds on energy, so she gives it her flashlight and takes the part back. Back on Kamino, Tarkin is pleased with Crosshair and his recruits’ performance. He leaves the project in the hands of Admiral Rampart, the mind behind the Imperial chain codes. Nala Se and Lama Su plan to develop a new line of clones to impress the Empire. Wrecker shows Omega her new room that he decorated himself.

I’m really loving Omega so far. I’m especially pleased with her given that before the show’s release, I didn’t see the need for another wide-eyed child character. The Clone Wars and Rebels showed us two periods in Star Wars history through the eyes of two inexperienced padawans already. And since the Batch are soldiers, I didn’t see how a kid could believably join them on their misadventures. Dave Filoni was ahead of the curve on both counts, giving Omega a personality totally unlike Ahsoka and Ezra. The Batch are also constantly reassessing Omega’s needs and whether they can meet them for her. Ahsoka was a rash, impatient kid eager to become a Jedi, and Ezra started out as a thief who only cared about himself. Omega is completely different; curious and resourceful, with a desire to belong to a group. I actually didn’t find Ahsoka and Ezra (mainly the former) as annoying as some. Their harsh, childish dispositions left lots of room for development. But it’s good to get such a different kid character after those two were somewhat similar, both impetuous future Jedi. I love the bond developing between Hunter and Omega. While the others care about her, Hunter is the one who consistently puts her needs first and tries to protect her. Omega brings heart to the show and facilitates depth and change in Hunter that I never expected. I also thought the scenes in “Replacements” involving Wrecker and Omega were sweet, and she’s having an effect on him too. We see Wrecker become a little more selfless as he goes from wanting to eat Omega’s dinner at the beginning (which, to be fair, she did offer) to making her a bedroom by the end. I wonder what’s going on with Wrecker’s headaches, though the obvious answer would have to do with his inhibitor chip. Echo and Tech don’t have much in the way of character development in “Replacements.” But Echo was in some Clone Wars arcs as a reg before the events of The Clone Wars episode “Counterattack” (season 3, episode 19), where he was presumed dead and captured by the Separatists. He was also at the heart of the Bad Batch arc of season 7. As for Tech, I assume they’ll delve further into him as the series goes along.

The storyline back on Kamino was quite interesting as well. Tarkin has been a hardass since 1977, but now we know he was aware that some of the people on Onderon were harmless civilians. Ordering the recruits to kill them all anyway is beyond messed up, and Saw Gerrera didn’t end up being there anyway. Of course, we know Gerrera has to survive this series since he appears later in both Rebels and Rogue One. “Replacements” gives us a good look at Admiral Rampart, the guy from the chain code hologram in “Cut and Run.” Tarkin is a hardened military man who believes the ends justify the means, but Rampart seems like an idealist. He passionately talks about his plans for the Imperial army and beams when Tarkin talks about his involvement with the chain codes. I’m not sure how big of a player Rampart will be, but it’s easy to imagine him discovering the reality of what the Empire is doing and becoming disillusioned. For whatever reason, what we’ve seen of Rampart thus far makes it seem like he truly believes in the Empire and that it’s making the galaxy better. Maybe he’s just a bit player and I’m reading too much into it. Still, there are many places they can go with a previously unknown Imperial character like this. They do a lot with Crosshair through simple visual language in “Replacements.” Even after everything that has transpired, it’s genuinely sad when he sits down in his old bed. None of his brothers are there, or ever will be again; all of their things are gone. He’s surrounded by strangers who don’t respect him and think he’s outmoded. Crosshair has done some awful things this season, like shooting down the civilians and his own subordinate. It’ll be interesting to see what happens if/when the Batch get him back and remove or disable his chip.

Overall, “Replacements” is a great episode. There’s lots of action and planetary exploration this week, but it never gets in the way of exciting story developments and characterization.

Overall, "Replacements" is a great episode. There's lots of action and planetary exploration this week, but it never gets in the way of exciting story developments and characterization.