REVIEW: The Book of Boba Fett – Season 1, Episode 1, “Stranger in a Strange Land”

Despite being a life-long Star Wars fan, I was never really on the Boba Fett hype train. Much like Darth Maul in the prequels, he was a potentially interesting character with a cool design who didn’t amount to much. This isn’t a criticism of the writing or direction of the original trilogy; he’s a tertiary villain character, so I don’t think it’s a huge failure to let him serve a purpose in the story and then write him out of it. But I never really understood the fanfare around this character that didn’t have much in the way of development or screentime. That did change a bit when he featured in The Mandalorian season 2, though. It was good to see Temeura Morrison in Star Wars again, with more of a chance to dig into a character this time. The action and music surrounding Boba Fett were also spectacular in The Mandalorian, and his dialogue and moral code really got me interested in the character. I wasn’t expecting Boba Fett to get his own dedicated series, but I wasn’t exactly shocked either after the focus he got in The Mandalorian. Episode 1, “Stranger in a Strange Land,” hit Disney+ today. Let’s take a look.

“Stranger in a Strange Land” finds Boba Fett in a bacta tank dreaming about his past following his tussle with the Sarlacc in Return of the Jedi. We learn that he blasted his way out of the belly of the beast, was robbed by Jawas, and eventually found himself in the custody of the Sand People. While present-day Boba works with his right-hand woman Fennec Shand to establish his rule over Mos Espa, we’re treated to flashbacks dispersed throughout the episode detailing what led him to this point. Some of Jabba’s former associates take the change in leadership better than others, and a mysterious band of fighters attacks Boba and Fennec in the street. The tide is turned by a pair of Gamorreans who formerly served as bodyguards to Jabba and then Bib Fortuna, now serving Boba since he showed them mercy rather than having them killed. 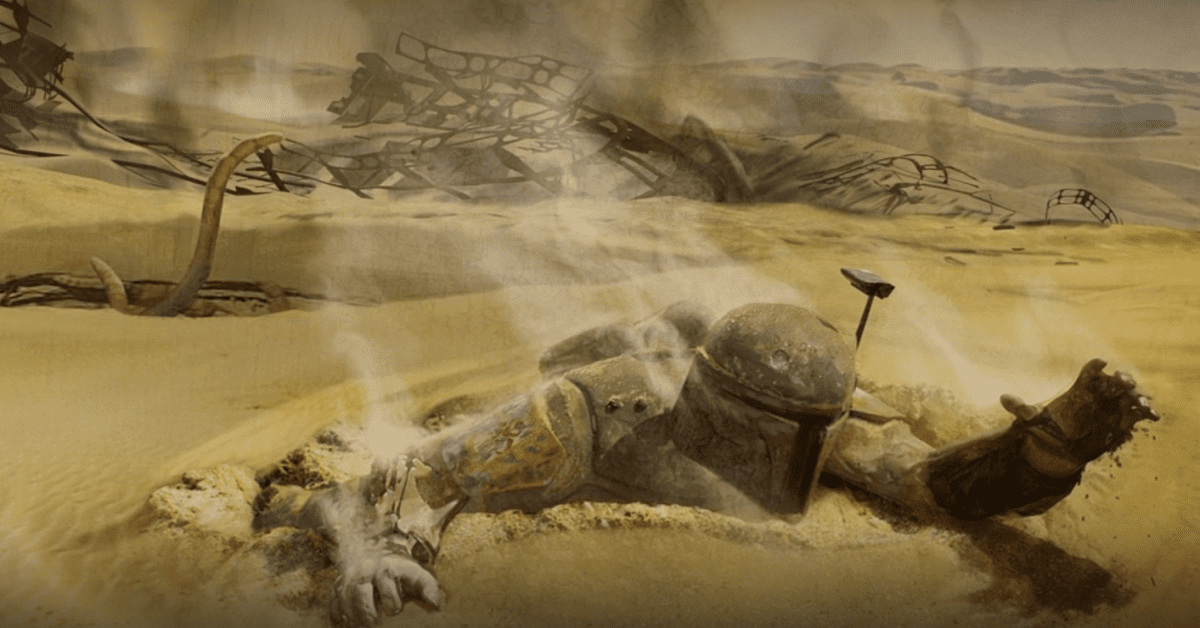 I want to say, right off the bat, I like the vibe of this show a lot. The music, atmosphere, and visuals do a lot to distinguish the look and feel of The Book of Boba Fett from that of The Mandalorian. I think giving this show to Robert Rodriguez, a director with a distinct and established style, was a great choice for this reason. His work on “The Tragedy” showed he had a unique take on this character and the world of Star Wars, and if “Stranger in a Strange Land” is any indication of what’s to come, I think Rodriguez has a real treat in store for us. Jon Favreau wrote this episode, and it’s good to see that he and Dave Filoni will continue to be involved with these spin-off properties in a meaningful way.

The Mandalorian’s composer, Ludwig Göransson, returns to work on The Book of Boba Fett, joined by Joseph Shirley in the music department. The show’s musical score is badass and really gets you hyped for what’s to come. One of my biggest praises here is that it never once made me feel like I was watching The Mandalorian; they did a great job reaching the middle ground of this show having its own feel while remaining connected to the larger narrative. The filmmaking is very classic Star Wars, with the benefit of Rodriguez’s sensibilities applied to the action scenes. I also like the way the flashbacks intertwine with the current plot to tell the story of Boba Fett, specifically the story we missed between the original trilogy and his appearance in The Mandalorian. We also get brief returns to his experiences on Kamino and Geonosis from the prequels. I like how interconnected everything feels as Boba reminisces on his exploits. I think using his resting in the bacta tank as a pretext for these dreams makes enough sense to justify the flashbacks. Temeura Morrison and Ming-Na Wen are as good here as they were in The Mandalorian. The story, at least in the present day, is pretty thin. That doesn’t bother me since this seems to be an action-oriented series with a bit of intrigue. And there’s plenty going on with this character; we catch up on his whereabouts during a crucial time period and see him laying claim to this part of Tattooine. I like that Boba and Fennec don’t always see eye to eye, him wanting to show mercy and garner favor with the locals while she prefers to tie up loose ends. Given that they themselves have both survived fatal incidents, her tendency towards violence is understandable. Unsurprisingly, though, Boba ends up being right to spare the Gammoreans as they save his butt. However, I could imagine this becoming a point of tension for the central duo. Fennec works for Boba and seems loyal to him, but I wonder if their differing approaches to laying down the law could drive her away. The mayor of Mos Espa is also established as a major player, demanding his own tribute rather than paying Boba. One is left to wonder if Boba’s attackers work for the mayor or if yet another faction lurks in the shadows. Could Crimson Dawn be involved? That would really be something. Of course, the Twi’lek bar owner played by Jennifer Beals could have hired them as well.

“Stranger in a Strange Land” isn’t the big opener that I think some fans were expecting, but it succeeds at what it sets out to do. The scene is set for Boba’s further adventures, and there appear to be plenty of enemies and other obstacles for him to overcome along the way. This is a fine episode with enough exposition and action to feel important. I expect the season to improve from here as things ramp up, so I’m happy with this premiere. I look forward to seeing where the story goes from here.

The Book of Boba Fett – "Stranger in a Strange Land"

“Stranger in a Strange Land” isn’t the big opener that I think some fans were expecting, but it succeeds at what it sets out to do. The scene is set for Boba’s further adventures, and there appear to be plenty of enemies and other obstacles for him to overcome along the way. This is a fine episode with enough exposition and action to feel important.