REVIEW: The Book of Boba Fett – Season 1, Episode 3, “The Streets of Mos Espa” 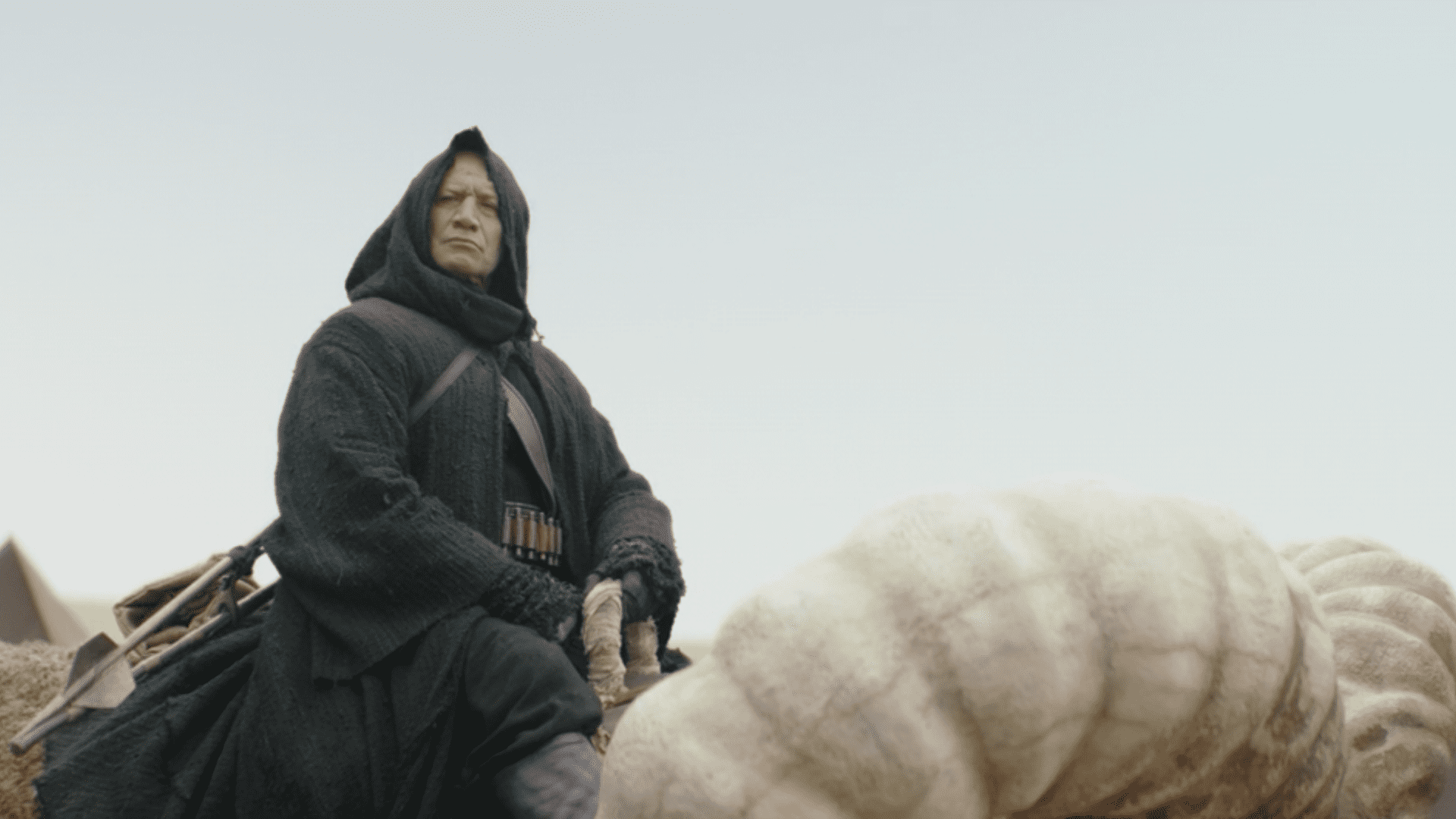 In “The Streets of Mos Espa,” Boba Fett hears of trouble in his territory as criminals steal water from a local farmer. All isn’t as it seems, though, as the trouble makers are unemployed and overcharged for necessities like water. Boba hires them into his entourage and orders the farmer to slash his rates. In flashbacks, Boba meets with the Pykes to discuss terms, and they tell him that they already pay duties to the bike gang Boba tussled with in “The Tribes of Tattooine.” He heads home to rally Tuskens but finds that the bikers have made short work of them while he was gone. In the present, the Twins send Black Krrsantan to kill Boba, and he’s stopped just in time by his new bodyguards. The Twins come in person to apologize, offering a baby rancor as a peace offering. Boba offers Krrantan back to them if they promise to vacate Tattooine and rescind their claim to Jabba’s land. They tell him that Mayor Mok Shaiz is the one he should really be worried about, and Krrsantan is set free to his own devices. The mayor is unavailable, but his majordomo tells Boba that he’s working with the Pyke Syndicate.

“The Streets of Mos Espa” seems most concerned with the mounting turf war on Tattooine, focusing on the growth of Boba’s ranks, as well as intensifying the odds he faces. The bit with the moisture farmer was a tad predictable, and the aesthetics of the cyborg crew Boba recruits clash a little with the show’s overall feel. This isn’t a huge deal, and if these characters become more likable and interesting, it may not be an issue at all in the end, but for now, I think it’s worth pointing out. Another thing I found strange was the fight scene with Black Krrsantan and the cyborgs. I think the scene itself was great and high-energy, though I wish they’d stop filming these things in such low light. I’d love to get a better look at what’s actually going on. This scene made me wonder where Fennec Shand and the Gamorrean guards were since the cyborgs were first to show up and defend Boba even though they should be least loyal. Fennec also continues to question every decision Boba makes, which prompts doubt on her intentions. Could she be considering betraying him for one of his numerous adversaries, or has she already done so? Where were the guards and why? Although Fennec owes Boba a life debt, her constant contradictions of his strategy do suggest that she sees him as weak. I look forward to seeing how this plays out, and even if she isn’t simply disloyal, I hope an explanation for her behavior lies ahead. 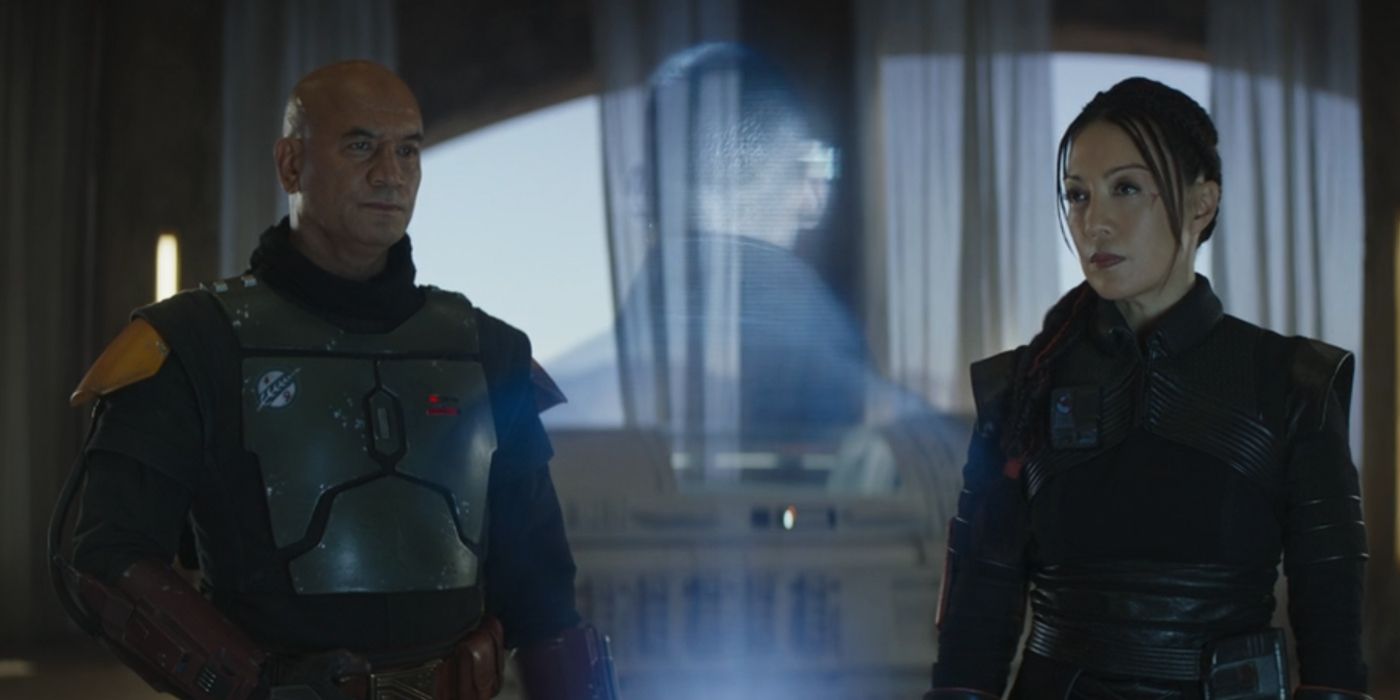 “The Streets of Mos Espa” is the first episode to mostly take place in the present, with only a couple of flashbacks. I think this transition is handled very well, and this was the right time for it. I’ve been interested in and entertained by the flashbacks, but “The Tribes of Tattooine” left me wondering when things would ramp up in the current timeline. “The Streets of Mos Espa” does a good job not only of integrating the flashbacks through the episode but in displaying how they connect to what’s happening now. This episode moves a lot of pieces into place for the brewing gang war, so it’s nice to learn more about relations with the Pykes and the mysterious biker gang in the flashbacks. “The Tribes of Tattooine” had my favorite flashbacks, but I really like how they implemented them here, giving context to current events rather than overshadowing them. This brings us to the inevitable but tragic conclusion of Boba’s time with the Sand People as the bikers wipe them out. No doubt, Boba feels not only grief for the loss of his family, but also guilt. He made the Sand People targets by stealing the bikes, and even more so when he laid claim to the Dune Sea on their behalf.

Speaking of the Sand People, I never thought I’d feel sorry for them. I think we all knew this was coming, but I still gasped when Boba found the destroyed village. This is a testament to the striking image of the burned huts and motionless bodies, but also the tremendous job the flashbacks have done. This scene is just lovely. Everything from the music to the scenery to Temeura Morrison’s facial expressions works together towards this gloomy atmosphere. “The Streets of Mos Espa” also has a couple of guest stars I wasn’t expecting in the form of Stephen Root as the moisture farmer and Danny Trejo as the rancor handler. They’re both good, and I guess I shouldn’t be surprised to see Danny Trejo in a Robert Rodriguez project.

This episode just aired today, but everything I’ve seen and heard has been overwhelmingly negative. I have some issues myself; like I mentioned, based on what we see in this episode, I think the cyborgs clash with the show’s look and feel. I also wish the episodes were a little longer, so the characters and story had more breathing room. However, I quite enjoyed “The Streets of Mos Espa” as a whole. I loved the segment with the rancor, although I think the Twins should have had more screen time, or at least involvement, before they pulled out of Mos Espa. They’re simply showing that rancors are more than evil beasts, which is exactly what they did with the Tuskens last week. I like that they’re showing the shades of gray we so rarely get in Star Wars. It makes sense for the rancor handler to be attached to it and care about it; did you see Return of the Jedi? I also find it difficult to judge an episode too harshly, knowing we may get additional context in the next couple of weeks. In this episode, we see that the Pykes and Mayor Mok Shaiz are going to be the major villains this season. That being said, we still don’t know everything. I feel like something big is coming, especially because most of what has happened so far has been flashbacks and exposition. I’m willing to wait and see, and I’m having a good time in the meantime. I actually like “The Tribes of Tattooine” the best so far; that episode was visually interesting, and the flashbacks were so good. They did a great job establishing Boba’s place of authority within the tribe. I still liked this episode, though, and I’m surprised to see so much blowback.

The Book of Boba Fett – "The Streets of Mos Espa"

"The Streets of Mos Espa" cuts back on the flashbacks and continues the graying of the Star Wars universe, furthering the brewing war between Boba and his nemeses. The visual aesthetic is a bit inconsistent and some of the action is difficult to see, but this is still an entertaining episode.