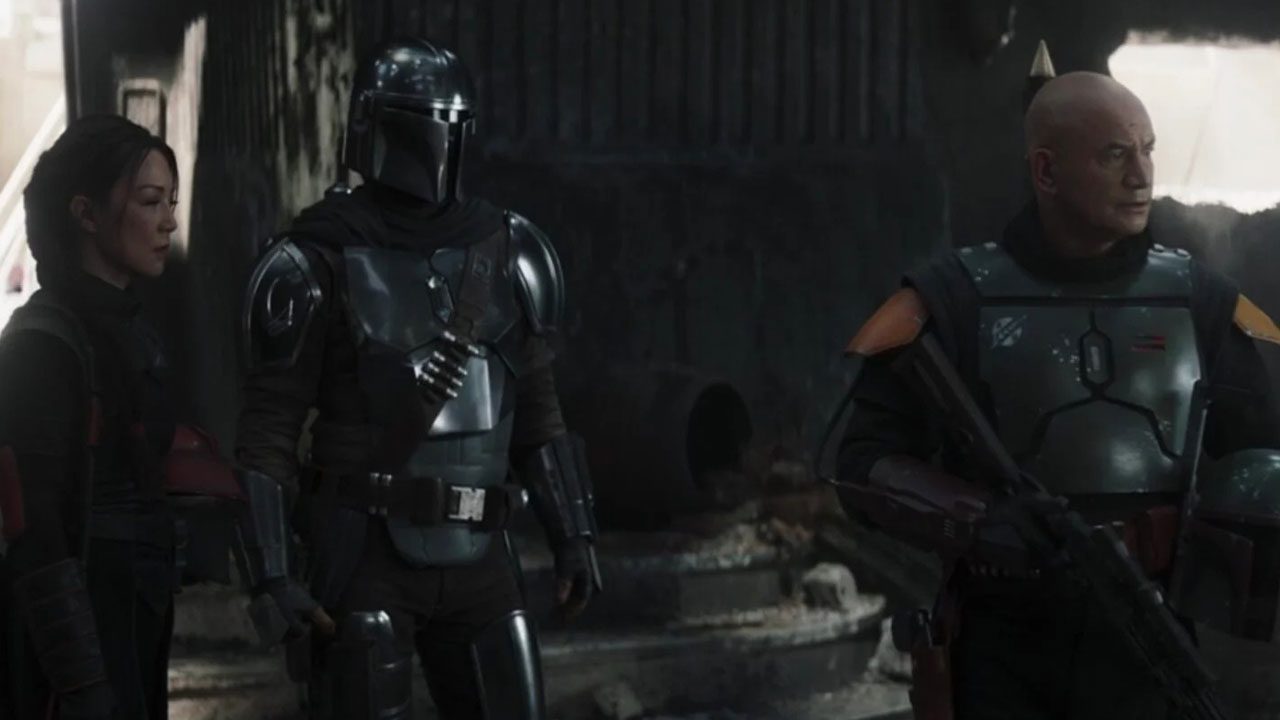 “In the Name of Honor” finds Boba Fett and Fennec Shand exploring the ruins of Garsa’s Sanctuary. They decide to hide there while they wait for reinforcements, unaware of the shoot-out in Freetown. Meanwhile, Cad Bane assures Mok Shaiz and the Pykes that he knows how to get Fett’s attention. Grogu arrives at Peli’s shop looking for Mando. Cad Bane faces Boba down and tells him that the Pykes killed the Tuskens raiders. Boba calls off negotiations, and Bane leaves. The families of Mos Espa turn on Boba’s enforcers. As the battle intensifies, the people of Freetown arrive, and Boba brings his rancor out. After the foot soldiers and droids are taken care of, Cad Bane directly challenges Boba Fett to a duel. Bane defeats Fett at blaster fire, but the latter takes his opponent down with his gaffi stick. Grogu returns to Mando, Boba is accepted as Daimyo, and all is well. In the palace, Cobb Vanth rests in the bacta tank, watched over by the mod artist who saved Fennec. 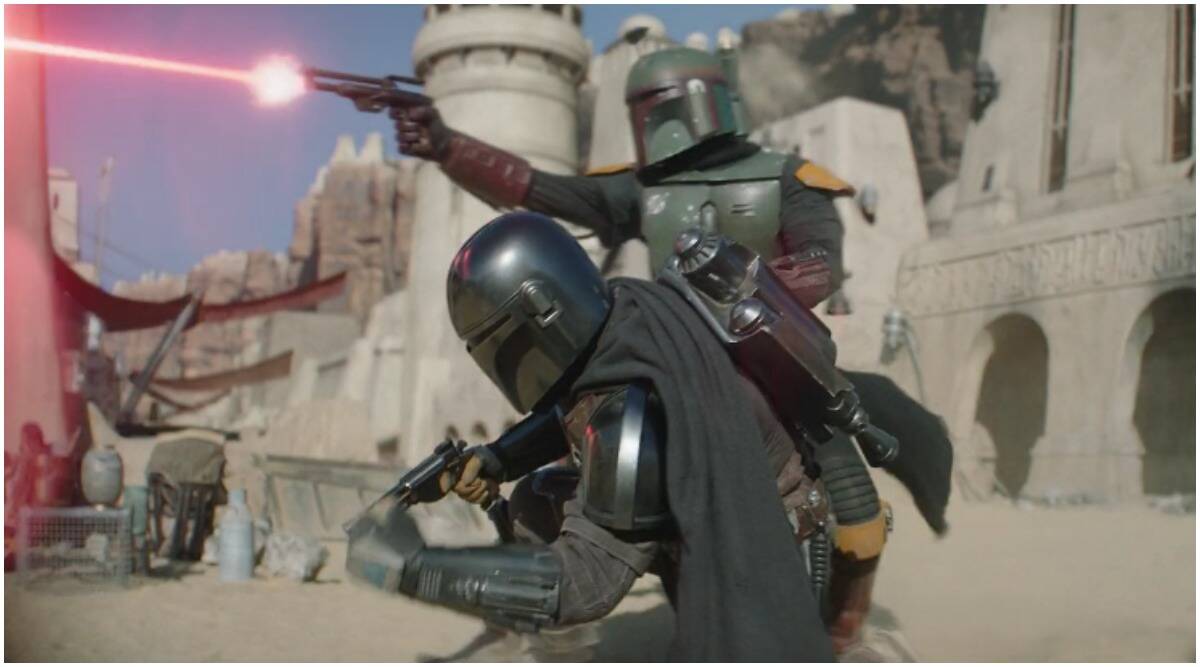 I’ve said this before, but I’ve enjoyed this season for the most part. It started slow, but I was willing to wait it out and see where the story threads went. The only reason I reiterate this is to point out that I’ve been very patient and forgiving with this series. Based on what I’ve seen and heard, I liked the first few episodes more than most fans. The only episode I’ve really been terribly disappointed in by itself is episode 4, “The Gathering Storm.” I say this because some of my problems with “In the Name of Honor” stem from earlier episodes. More specifically, this season is disjointed, and many early character introductions and setups never pay off.

For example, the Hutt twins were fascinating and kind of creepy. I wanted to know more about them. Introducing them just to write them out in favor of the “real” villains is simply baffling. They could have used them in a later season instead, or found a way to make them relevant to the larger story. Krrsantan and especially the mods working for Boba never got sufficient time to set up the parts they play here before the finale. Part of this is because they wasted time tying Krrsantan to the twins. His introduction should have been the scene in Garsa’s where he ripped off the trandoshan’s arm. The mods are a lot worse off, though. We know nothing about them! Their relationship with Boba is entirely undefined, and there’s no telling why they’re so fiercely loyal to him. Then you have Boba’s rancor, which is one of the season’s most egregious missed opportunities. When he is first introduced, the trainer (Danny Trejo, who we never see again!) says it would take a lot of time and training to ride him. Literally, the next time we see the rancor (not counting when he rattled the crime lords), Boba is already riding him. This is simply a terrible payoff because they didn’t build it up at all. They say Boba will need to invest time and effort, and we don’t get to see any of it. Furthermore, they waste an episode (my least favorite of the season) telling a backstory we already know. The Mandalorian season 2 already told us how Fennec and Boba met and teamed up; we didn’t need an entire episode showing as much. This time could (and should) have been used to better integrate the season’s disparate elements, like Cad Bane, the Tuskens, and the mods. As it stands, different episodes feel like completely different shows, and I don’t mean that as a compliment. In retrospect, I don’t understand the way time was used this season. Almost every episode was enjoyable in a vacuum, but it’s bizarre to spend so much time with characters and conflicts that ultimately won’t go anywhere. Many people have pointed to the two Mando-centric episodes as part of the problem, and initially, I agreed. They were my two favorite episodes this season, but “Return of the Mandalorian” doesn’t tie in with Boba’s story until the very end. But I don’t think these episodes were a waste of time because they were fun and developed the characters they did concern. This material would have better served the overall story as a subplot throughout the season. That way, we could keep these fun interactions with our favorite characters without the expense of Boba’s screen presence. It’s pretty wild to halt the main story for two (out of seven!) episodes for side quests. But as a secondary storyline running alongside Boba’s adventures, I think it would have worked well. Honestly, I would junk episode four except for the meeting of the families. I like this episode even less than when I first saw it; it just strikes me as filler. We know Boba’s armor isn’t in the Sarlacc, and we know how he recruited Fennec, so we don’t need to see any of this. Removing nonsense like this leaves a lot more room for the good stuff. With these adjustments, I don’t see any reason to remove the Mando material. I don’t mean to be too harsh; as I said, I liked this season more often than not. 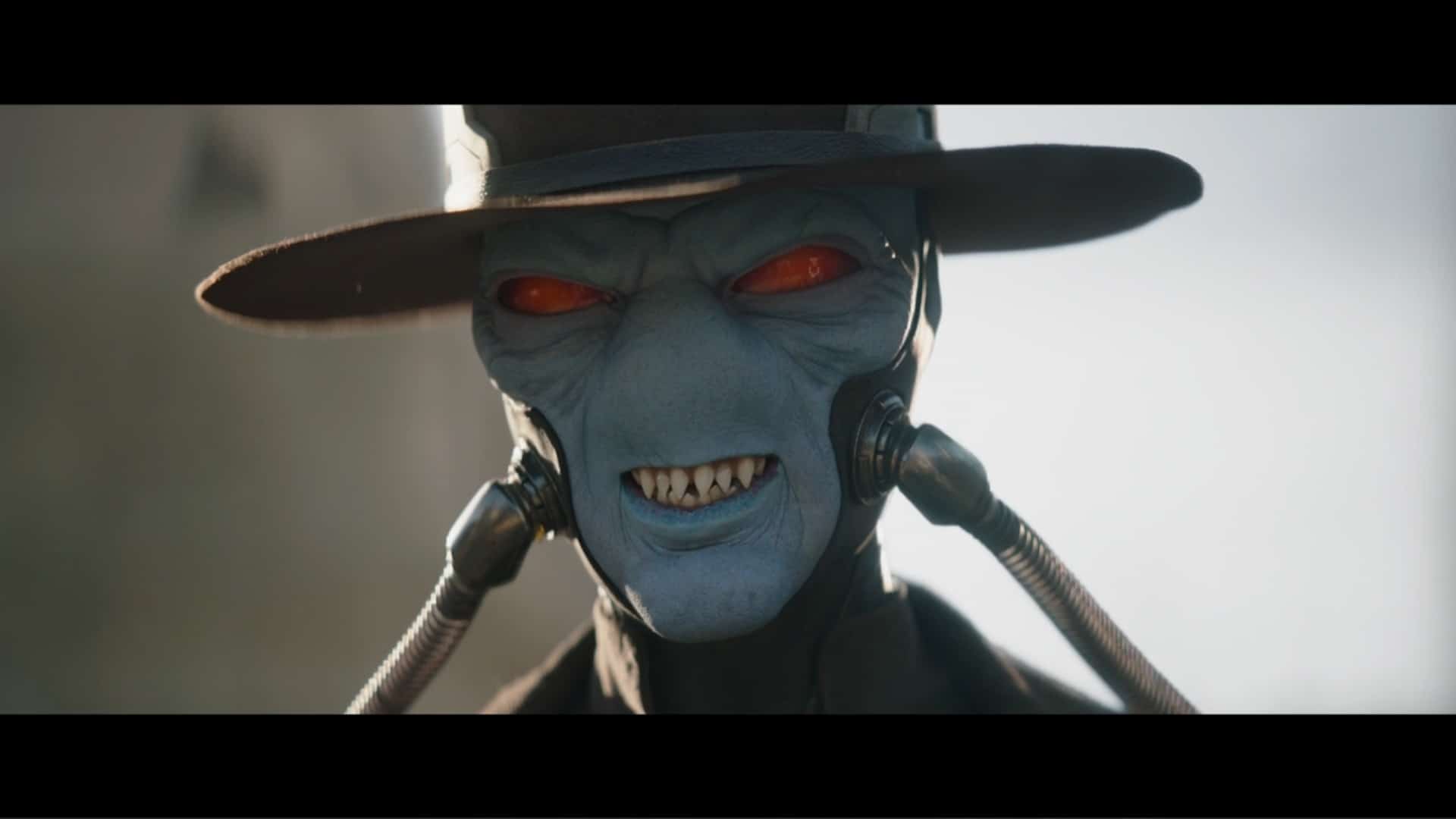 Within “In the Name of Honor” specifically, several payoffs are botched or played way too early. Two of these come in the deaths of the major villains. Firstly, why would you introduce Cad Bane into a new medium just to kill him one episode later? This bothers me even more because many things about this confrontation are good, especially on paper. Bane is older than dirt now, and Boba is absolutely the right person to kill him. Given Bane’s relationship to the Fetts and Boba, in particular, it just makes sense and smacks of the poetry George Lucas so famously likened the Star Wars franchise to. And Boba’s bounty hunting weapons fail him, leaving him to use the very symbol of his tribe, the thing that makes him different from Bane, because Boba Fett previously was very much like Cad Bane. In the previous episode, Bane was correct to call him a killer and reference his working with the Empire. These two could have been such great character foils if more work had been put into Boba’s character. And you know what? It feels silly to say that about a character whose name is in the title. I’m in favor of Bane appearing in this series and getting killed by Boba. Even the means of the attack is just priceless. But this needed more buildup. A lot of it. This could have been fixed with more time, i.e., making Bane a villain for more than one season. I would love this, especially since he was brought in so late to this season. The other option would have been to tie him in much earlier, like perhaps showing him instead of the twins in the first few episodes. I like the former option better. These characters are nemeses on paper, two sides of the same coin. Like Kenobi and Maul, this dichotomous duo represents an exercise in one man’s ability to learn and change and the other’s stubbornness and inflexibility. Their showdown was inevitable and had to end with the better man killing the very image of his former self. It’s just such a shame that what was set up so well in The Clone Wars and supplemental material was quickly squandered in one mere episode.

My other problem is with Fennec Shand’s take-down of the Mayor and Pyke leader. This should have been Boba’s kill! Are you kidding me? Yet again, I’m torn because the scene itself is tense and well-filmed, but I can’t believe such an obvious mistake was made here. In this episode, it’s revealed (and heavily focused on) that the Pykes are the ones who really killed Boba’s Tusken family. This means he took his vengeance out on the innocent while the true culprits slipped away scot-free. I feel no sympathy for the swoop gang; they were scum anyway, and nobody will miss them. But really, Boba feels no need to kill the leader of the Pyke Syndicate himself? Fennec is more motivated to end this drama, despite losing far less to these criminals than Boba? This is such a shockingly dumb choice that I can’t get my head around it. This episode also further illuminates the lack of buildup Boba’s allies got, as well as his enemies. Looking back, it feels like a lot of time was wasted in a season that was so short to begin with. I love Grogu and Mando. They’re well developed and easy to get invested in, which is more than I can say about any other live-action Star Wars characters since the original trilogy. But their reunion should have happened later, after more buildup, just like so much in The Book of Boba Fett. I want them together, and Grogu absolutely made the right choice. But as things are right now, The Mandalorian took two seasons to arrive at a point that has been undone in two episodes of a different series. These two needed more time apart for a more affecting reunion, just like Boba required time to learn to ride his rancor.

Overall, I can’t say I didn’t enjoy The Book of Boba Fett. Interesting backstory, unpredictable (and well-executed) cameos, and an ultimately crowd-pleasing finale have made this season worthwhile. I just find myself frustrated because this could have been a great Star Wars story, an exploration of a character shrouded in mystery and legend. I like a lot of what we got, but this was no Mandalorian.

The Book of Boba Fett Season 1, Episode 7, "In the Name of Honor"

Overall, I can't say I didn't enjoy The Book of Boba Fett. Interesting backstory, unpredictable(and well-executed) cameos, and an ultimately crowd-pleasing finale have made this season worthwhile. I just find myself frustrated because this could have been a great Star Wars story, an exploration of a character shrouded in mystery and legend. I like a lot of what we got, but this was no Mandalorian.