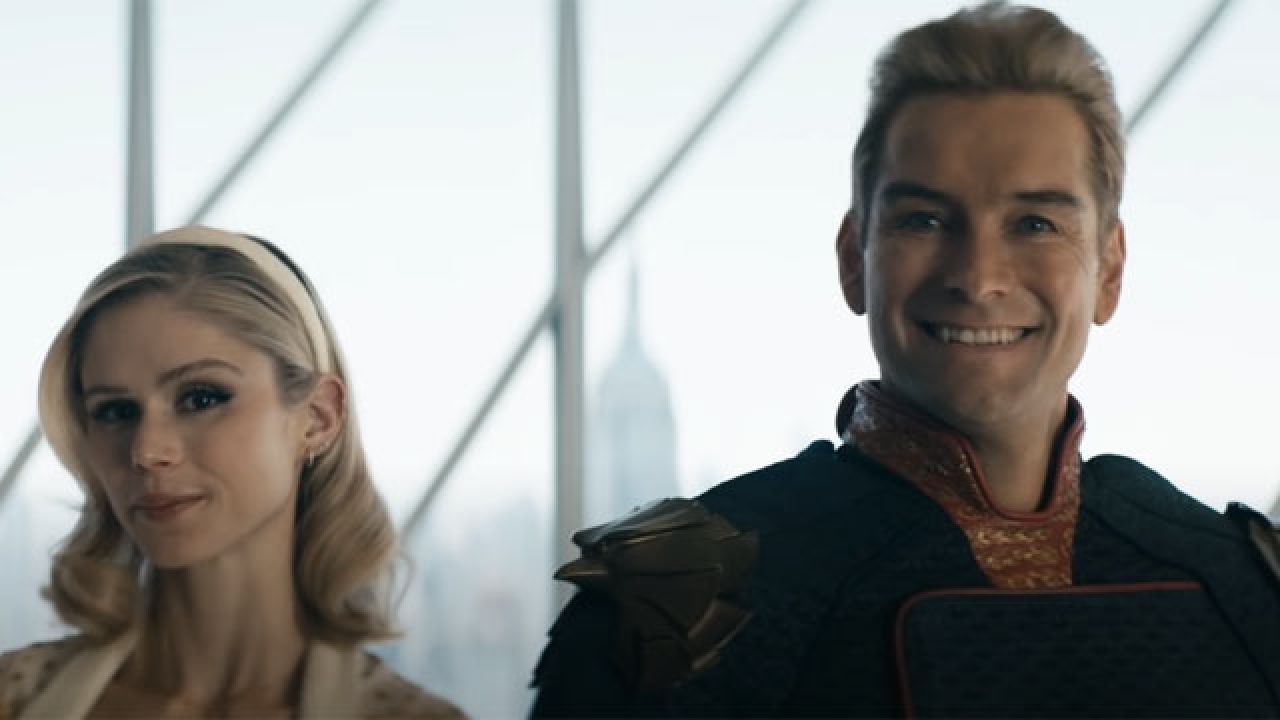 Finally, my personal favorite Amazon original series is back. Like many other film and TV series, The Boys had a long two-year wait between seasons thanks to covid. This season takes its cues from season 2, at least initially, showing the fallout of Stormfront’s outing as a Nazi and Congresswoman Neuman’s tenuous alliance with the Boys. Let’s dive in while the supe hunting is good.

“Payback” opens on the premiere of Dawn of the Seven, a Vought-produced movie explaining away the Stormfront debacle. After the movie, Butcher asks Hughie for permission to go after their latest target. Hugh only approves photos – no violence. Frenchie and Kimiko infiltrate a party hosted by a man who can shrink. He accidentally kills his lover, and the Boys use the situation by drugging and capturing him. Hughie lives his best life with Starlight and works faithfully for the bureau. A man arrives at headquarters asking for Nadia, who is really Congresswoman Neuman. Butcher visits Becca’s son Ryan and plays a board game with him. Homelander runs damage control, appearing on talk shows to talk about Stormfront. Marvin, AKA Mother’s Milk, is no longer with the Boys. He attends his daughter’s birthday party, and it’s revealed that her mother is remarried. Stan Edgar meets with the president to sell temporary Compound V to the military. Congresswoman Neuman tells Hughie they can no longer pursue Termite, the shrinking supe, thanks to Butcher using drugs on him. Butcher takes this about as well as to be expected. 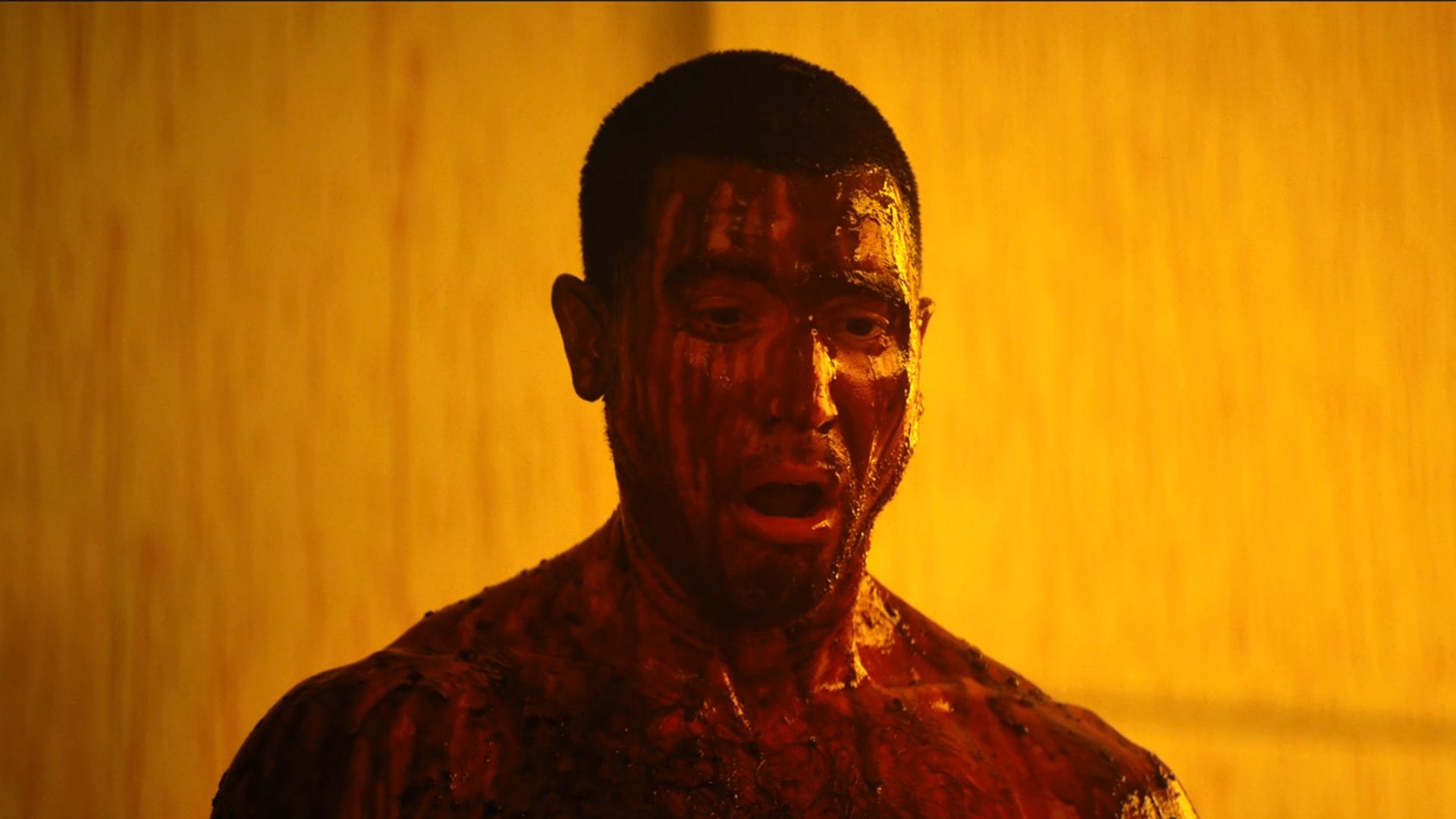 Edgar offers Starlight the role of co-captain of the Seven. Hughie shrugs this off and implies she wants to get back together with her ex. She accepts the position, to Homelander’s chagrin. Homelander visits Stormfront, who is alive but not well. Maeve is working as an informant for the Boys, having provided the tip on Termite. She gives Butcher some of the temporary V doses to go after Payback, another superhero group. Homelander comes to Butcher’s house asking where Ryan is. Eventually, he turns the topic to the dealings between the bureau and Vought. He suggests that one day, he and Butcher will fight to the death. The man approaches Neuman again. At first, they reminisce on their former friendship, but she ultimately kills him. 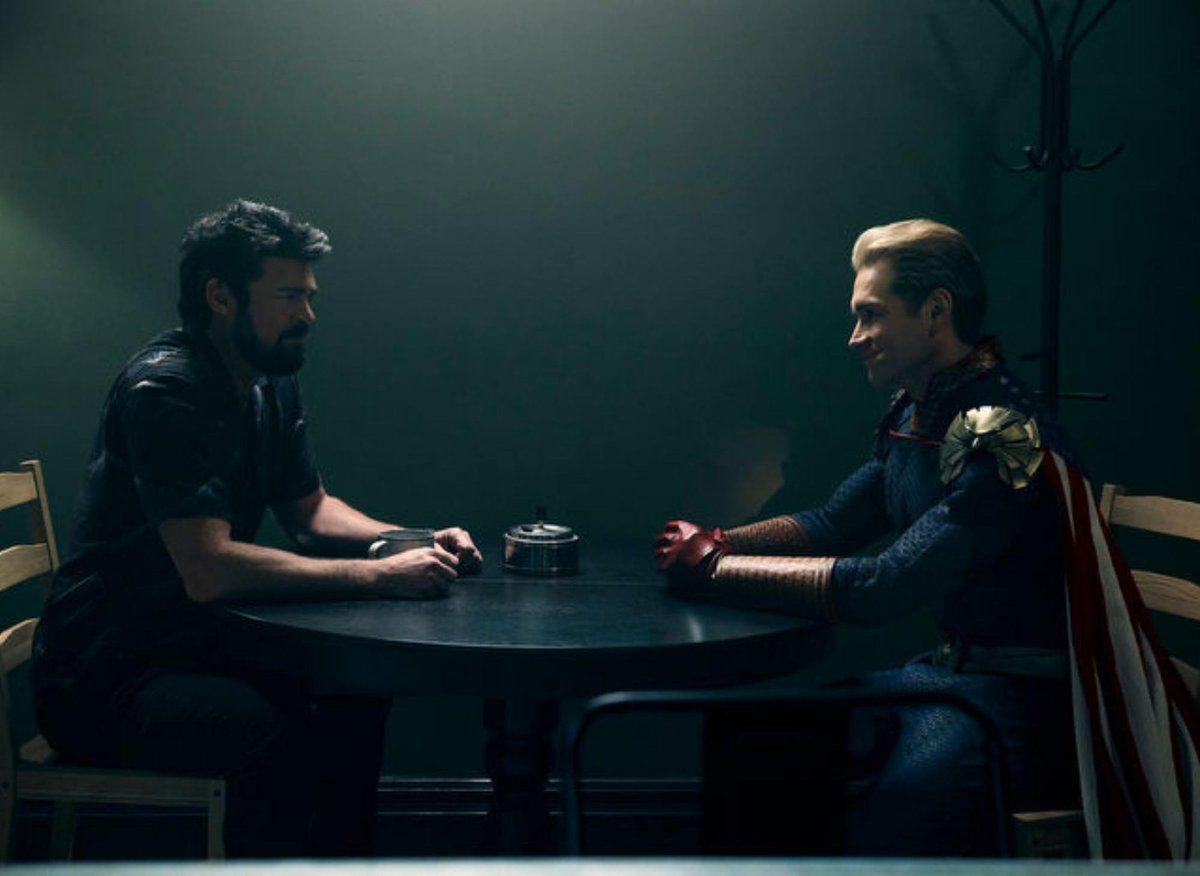 This episode is a lot of fun right from the beginning. Dawn of the Seven is an obvious riff on the DCEU back when it was a thing, in its bleak lighting, attempts at meaningful social messaging, and the “release the Bourke cut” campaign. The film’s director, Adam Bourke, is played by PJ Byrne, who played Bolin in Legend of Korra and Nicky “Rugrat” Koskoff in The Wolf of Wall Street. Here, we also see that he’s engaging in a sick, mutually destructive tryst with Vought PR specialist Ashley Barrett (Colby Minifie). She makes a funny joke that Tony Gilroy had to re-shoot Bourke’s work; this is a layered joke I appreciated. Of course, Justice League underwent extensive re-shoots, and Gilroy was involved with the Star Wars offshoot Rogue One, which suffered similar problems. There’s an immediate cameo in the form of Charlize Theron playing a fictionalized, Aryan version of Stormfront in the film. 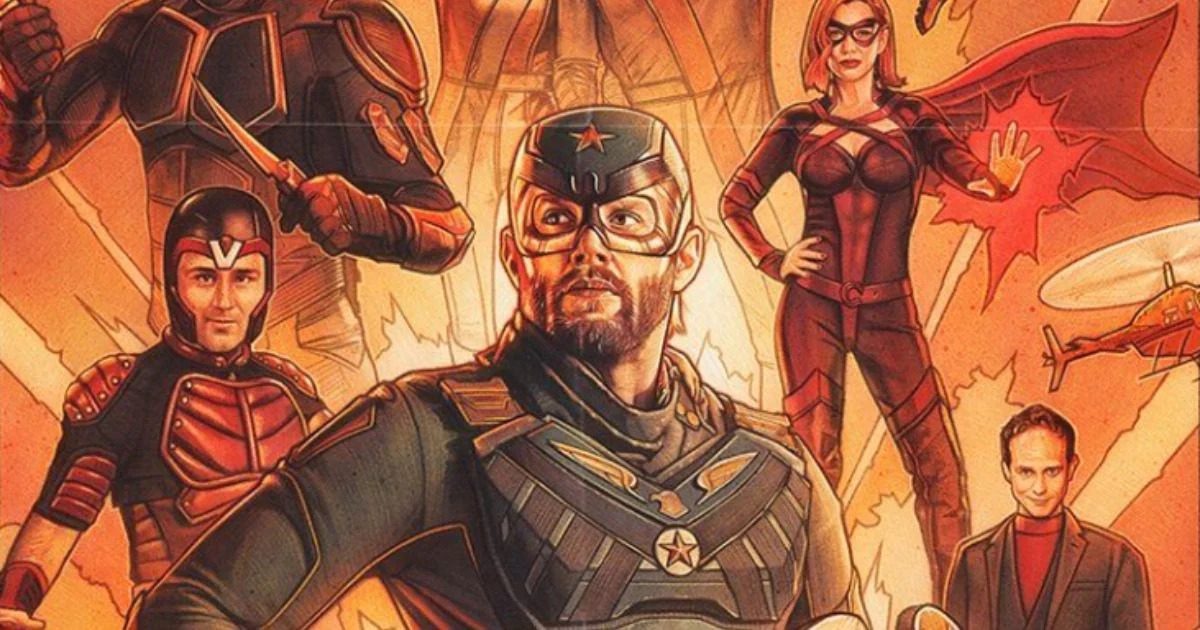 The festivities after the film’s screening are telling in their own ways. Hughie is noticeably uncomfortable attending the event with Starlight, particularly when it means standing near Homelander. This is understandable, of course; the other superheroes fear Homelander, so Hugh can’t be expected to stand up to him. We also see how Homelander writhes and struggles to come off looking good when questioned about Stormfront. His lies are even more despicable once we learn that Stormfront is alive within the Vought headquarters and that he regularly visits her to vent and receive sexual favors. If I have one big gripe with The Boys, it’s that Homelander and Billy Butcher are the only characters I care much about. Hughie and Starlight/Annie are seemingly the most moral and conscientious of the main cast, but they don’t excite me. I don’t return each week of every season to see them; I crave the depravity of Homelander and the dysfunction of Butcher and his team. Going by the end of “Payback,” I can only assume Hugh will be back with the Boys within an episode or two. I can’t fault this decision because, while it returns the status quo a little quickly and easily, Hughie works best as a foil to Butcher. Hugh is frustrating in “Payback,” especially when he learns about Annie’s ex and sexual history. The way he gets possessive and jealous over events from years ago is scummy. It’s also childish and paints him as immature and untrusting. One has to sympathize with her subsequent rejection of his sexual advances; dude, you basically called her a slut. Grow up or move on. I did like the use of the song “Uptown Girl” in the episode, continuing the use of Hughie’s favorite music to comedic effect. It’s one of my favorite songs, and the way it’s used, especially at the end, is both funny and sad.

I was right about the trailer for this season; Maeve is working with Butcher to subvert Homelander. I assume this was initiated after the big confrontation last season, in which Ryan accidentally killed his mother to bring Stormfront down. Speaking of that, I love that Butcher cares for the boy and checks in on him. This is a surprisingly wholesome turn for a show and a character that rarely are. Given what we learned about Butcher’s father in season 2, he and Ryan have a good bit in common. This could be an intentional parallel or just something for the two to bond over. At least Ryan had a good mom for a chunk of his childhood; it didn’t sound like Billy’s mother did a good job at protecting him, and in my eyes, that makes her complicit in the abuse and scum. 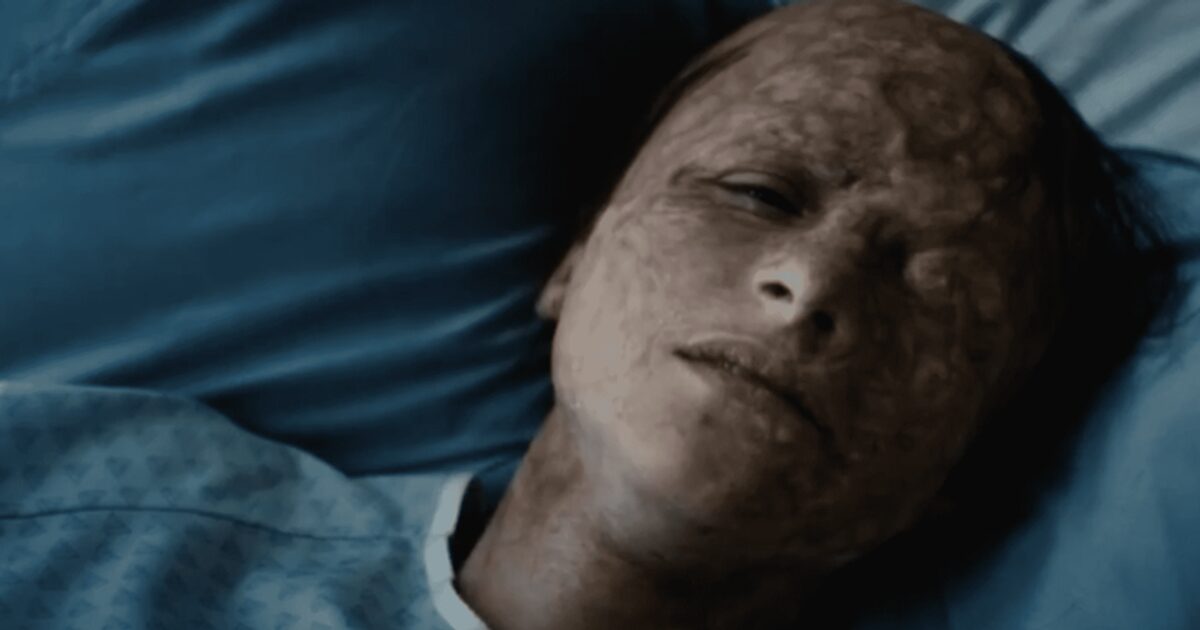 “Payback” is a decent start to The Boys season 3, and I look forward to what’s ahead. I imagine Butcher will be less than shocked to learn of Neuman’s true goals, especially after his chat with Homelander in this episode. This episode is funny and action-packed, but I hope to see more pathos in the next few episodes.

"Payback" is a decent start to The Boys season 3, and I look forward to what's ahead. This episode is funny and action-packed, but I hope to see more pathos in the next few episodes.