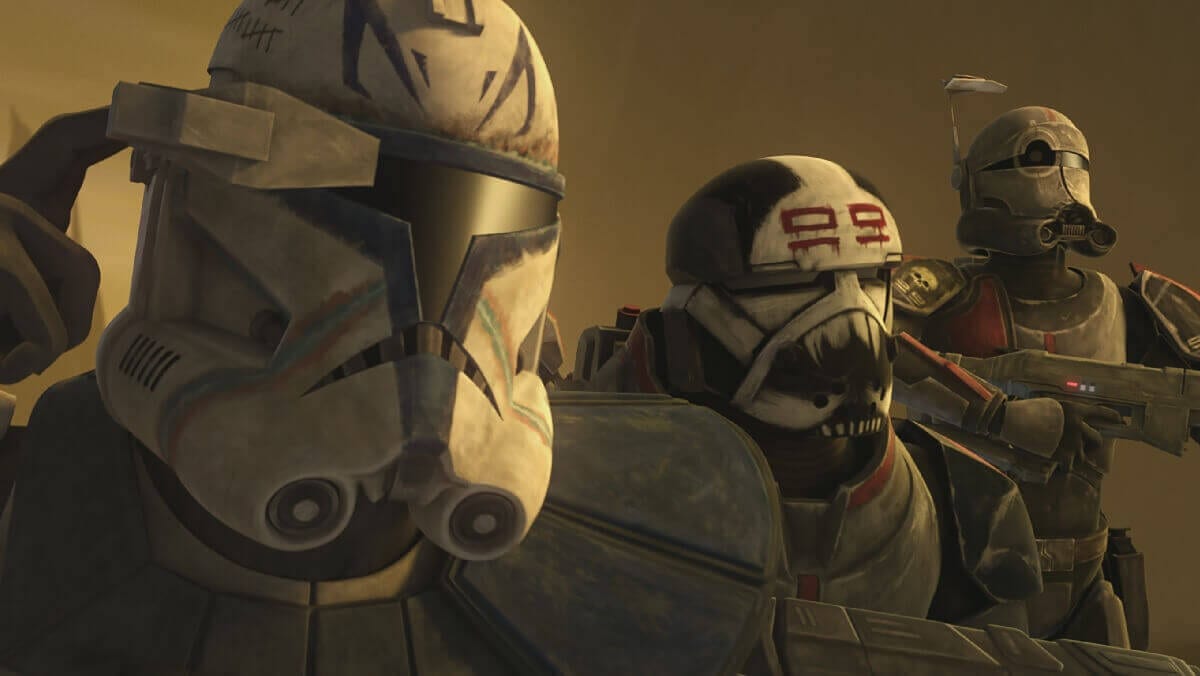 Since Dave Filoni announced #CloneWarsSaved at Comic-Con 2018, excitement for season 7 has been palpable. More often than not, it has felt as though excitement for The Mandalorian and this show was all that Star Wars had going for it. Most of the Disney Star Wars flicks have made money, and they all have their defenders, but a lot of fans have lost interest thanks to the sequel trilogy. Personally, for a while, I didn’t even want to hear the words “Star Wars.” It was so exhausting having a constant barrage of subpar content coming from one of my favorite series, not to mention all the arguing and name-calling. However, I absolutely love The Clone Wars, and Rebels and The Mandalorian both stand out as bright spots among the Disney Star Wars canon. As such, for a long time, this was the only Star Wars property I had any hope for. I was ultimately very pleasantly surprised by The Mandalorian, which I had been pretty much writing off as fanservice. Naturally, this only made me more excited for Clone Wars’ final season. I think it’s worth noting that, while the series originally got 6 seasons (which feel more like 5.5), it always felt like it could use at least one more. The absence of Ahsoka, choice of stories explored, and lack of closure in season 6 make “Sacrifice” seem like a very random, abrupt series finale. All this being said, after almost 2 years of hype from fans and creatives alike, can season 7 ever live up to everyone’s expectations, the incredible quality of previous seasons, AND satisfyingly tie up all loose ends? We can only watch and see. Let’s take a look at the long-awaited season opener, “The Bad Batch.”

In “The Bad Batch,” Republic forces led by Anakin Skywalker and Mace Windu fight for control of the planet Anaxes. Captain Rex believes that Separatist droids are learning his tactics and concocting specific counter attacks. The Jedi masters approve Rex’s plan to take Cody and a small team behind enemy lines to infiltrate a cybercenter that could be transmitting this information to the droids. The Troopers, and we as the audience, are introduced to Clone Force 99, a band of defective clones with “desirable mutations” who go by the affectionate nickname “the Bad Batch.” Tech, Crosshair, Hunter, and Wrecker each have specialized skills that make them especially helpful thanks to their mutations. As soon as the Clones make it behind enemy lines, their ship is fired upon by battle droids. They crash, and everyone makes it out safely except for Cody, crushed beneath the ship’s wreckage. Wrecker single-handedly lifts the ship off of him. The Bad Batch charge the oncoming droid army. Rex and his “regs” (what the mutated clones call regular clones) carry Cody to safety and all of the clones decide to make camp. Rex calls in an evacuation for Cody and states that he is in charge now. Some of the “batchers” fight this at first, and Wrecker starts choking Jesse, but Hunter reigns his men in and supports Rex’s leadership. The Troopers infiltrate a Separatist droid outpost and detect that there’s a droid battalion on the way. They leave and continue on their way to the cybercenter. Trench warns the droids about the troops, but it’s too late; they blast the droid taking the call before he can even ask when they’ll arrive. Tech starts working on the computer, and the other Batchers help the regs with the droids outside the cybercenter. Meanwhile, Tech finds that the enemy’s intel isn’t coming from an algorithm at all; it’s coming from a live feed, a living organism. He plays the audio for Rex and remarks that it almost sounds human. The audio identifies the organism as CT-21-0408, aka Clone Trooper Echo. The lead droid informs Trench that the clones made contact with the planet Echo is on. The other troopers question Rex on the significance of the number, and he tells them: Echo is alive. 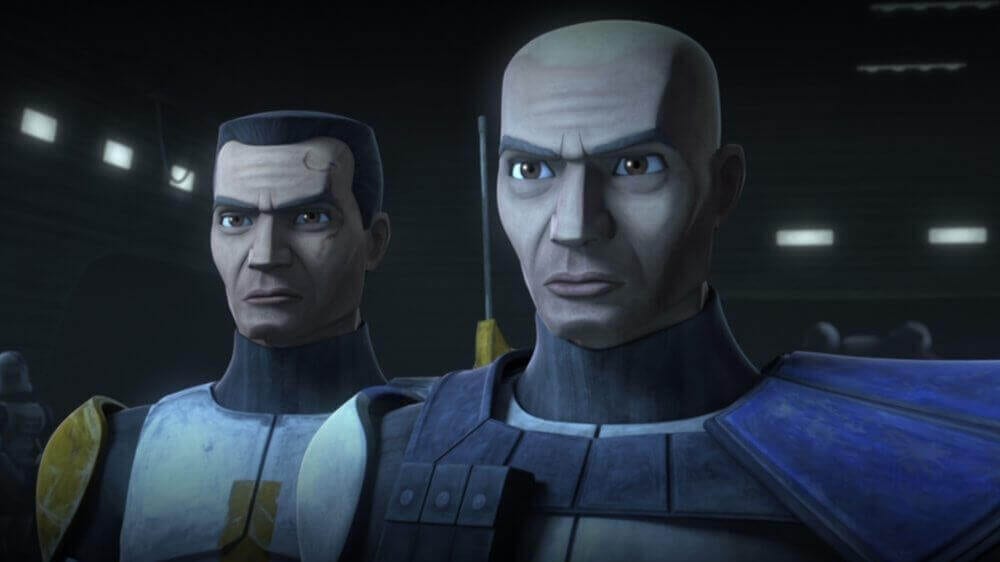 I have never sought out and watched the “Bad Batch” reels or any other unproduced Clone Wars material. So, while I was vaguely aware of them, this is my first time seeing this episode in any way, shape, or form. As such, my first impression of “The Bad Batch” is that the animation looks absolutely incredible. The Clone Wars always had pretty impressive animation for TV (making Resistance that much worse by comparison.) It was always improving its character models, textures, and movements. People have often observed that this series really grew and matured with its audience, and this applies to more than just the main characters. Especially with season 3, the show’s visuals got really creative, fluid, and just joyous to behold. So the fact that the animation has evolved and improved again is exciting and highlights that Disney is serious about this project and willing to invest in it, unlike something like Resistance. Anakin, Rex, and the other characters all look recognizable but significantly better than last we saw them. Based on the footage we’ve seen in the trailers so far, I even wonder if they’re working on the designs of characters like Anakin and Ahsoka to show a transition to their respective appearances in Rebels. In addition, the lighting in “The Bad Batch” looks very natural and just gorgeous. The landscapes and plants are beautiful and legitimately look good enough to display the still images.

It’s so good to see the Clone Troopers in action again. Knowing only the vague concept of this episode’s story, I was on the edge of my seat the entire time. I’m not sure how it would hold up for those of us that have seen the story reels, but on its own, “The Bad Batch” presents an exciting and unpredictable story. It also introduces intriguing ideas, with the Bad Batchers and Echo being alive with the Separatists. I had never imagined clones that were even more specialized than the troopers. It’s really interesting that they look even more distinguished than their fellow clones. Much like the “regs,” I was shocked and, at first, confused to see the Batchers with their relative lack of resemblance to Jango Fett. I also like their personalities, although one wonders if their irreverent nature will cause problems with Jedi commanders and the more traditional troopers alike. It’s a nice touch to name this squad after 99, the clone befriended by Hevy, Echo, and others back on Kamino. He was deformed and served as a janitor rather than a soldier, but was still seen by the others as a brother and died heroically. All this being said, the biggest surprise and most emotional story beat offered by “The Bad Batch” is the survival of Echo. Echo was previously presumed dead after a mission to The Citadel to rescue Jedi Master Even Piell (season 3, episode 19, “Counter Attack”). The look on Captain Rex’s face when he receives this information says it all. Even though he had his suspicions earlier in the episode, learning that the unthinkable is true shakes the experienced trooper to his core. I can’t wait to see how Echo survived, and I fully expect an emotional reunion with his brothers in arms. It’s also good to see Separatist Admiral Trench back in action. From his spidery appearance (with cybernetic replacements for limbs lost in S2 E16, “Cat and Mouse”) to his cold military strategies, Trench is easy to root against in any circumstances.

It’s wonderful to hear all of the actors in their old roles again. Matt Lanter is my Anakin Skywalker; as strange as it sounds, I can’t hear Hayden Christensen’s voice in my head anymore when I think of Anakin. This is true of many of the prequel characters who appear in The Clone Wars. It’s likely due to the sheer amount of Clone Wars content there is compared to the three prequel movies. On top of that, many of the series’ vocal performances are simply better than those provided in the prequel trilogy. Although this doesn’t apply to all characters, of course; I like Alec Guinness, Ewan McGregor, and James Arnold Taylor equally as Obi-Wan, and Ian McDiarmid IS Palpatine. Anyway, though, the star of “The Bad Batch” is far and away Dee Bradley Baker. He’s been one of my favorite voice actors for a while, appearing in some of my favorite series, such as Avatar: The Last Airbender, Phineas and Ferb, and Kipo and the Age of Wonderbeasts. However, at least based on what I’ve seen/heard, The Clone Wars is his magnum opus. Baker voices every single clone trooper in every episode of the sprawling series, including the bad Batchers we meet in this episode. He has a distinct voice for every trooper, and in some cases, such as with the Batchers, you can’t even tell it’s the same actor until the credits roll. It’s amazing, and whatever they’re paying this man, it’s not enough. He is the soul of Captain Rex, Cody, Fives, and every trooper in the show, be they main character or background extra. 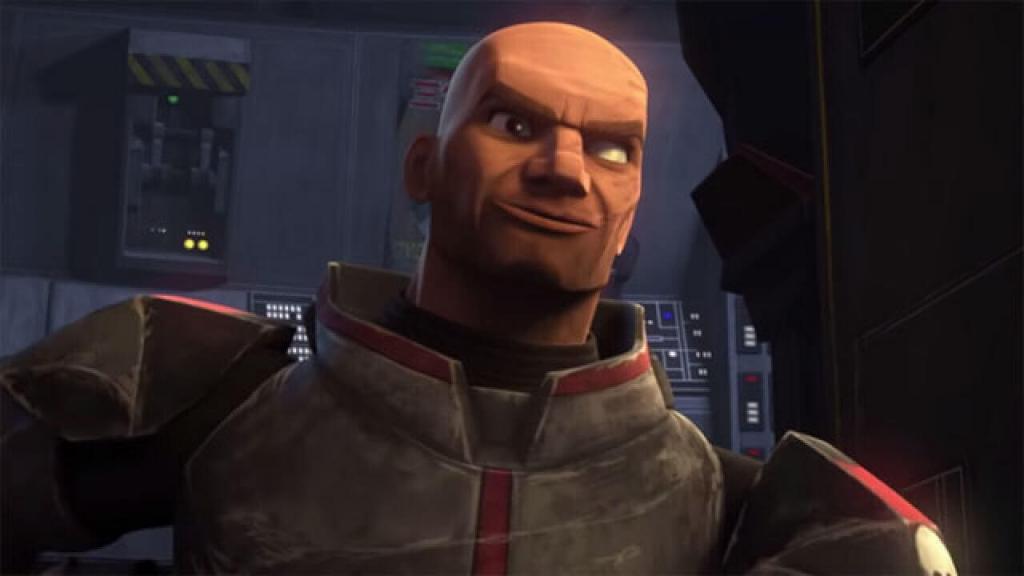 Overall, I would say that “The Bad Batch” is very good. It isn’t one of my favorite episodes of the series, but I’ve only seen it once, and I have no idea how this story arc will pan out in the next ~3 episodes. This is a good season premiere full of interesting character moments, emotional reveals, and shocking plot developments. I can’t wait to see how this story arc, and the season as a whole, pans out.

The Clone Wars – "The Bad Batch"

"The Bad Batch" brings The Clone Wars back with a bang. Gorgeous animation and music, great voice acting and an exciting story make this one a winner.

So I love all that you do. I’m quickly leaving a comment to say thank you for reviewing this and when I watch it I’ll leave my thoughts on it so commenting for later!!!

Thank you so much! Hope you enjoyed the episode.