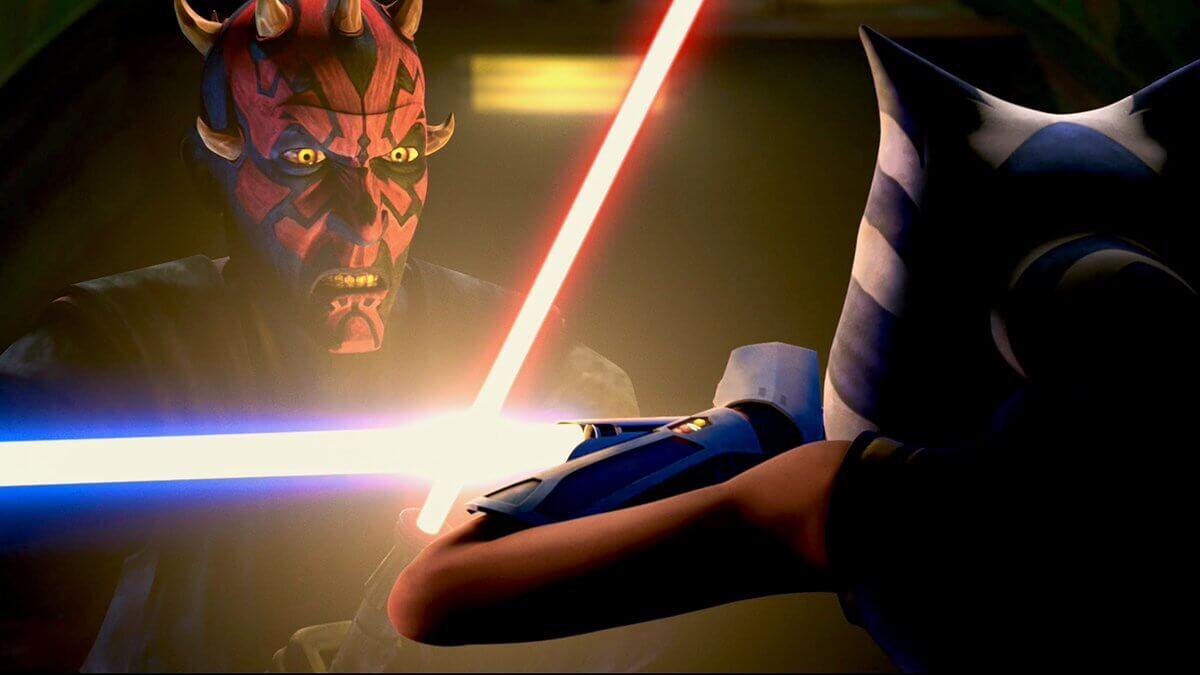 “The Phantom Apprentice” picks up right where “Old Friends Not Forgotten” left off, with Ahsoka and Maul in the Undercity. He reiterates that this set-up was intended to draw Obi-Wan out, to which Ahsoka replies that Master Kenobi had a more important mission. She sharply tells Maul to surrender so they can both go see Obi-Wan, but he sees no point in surrendering to the Republic when they won’t be in power much longer. This confuses Ahsoka, who asks if Maul is to be the new power in the Galaxy. He tells her about Darth Sidious and then escapes when Captain Rex comes with her reinforcements. Ahsoka and Bo-Katan regroup and speak with Obi-Wan over the holo and she asks him who Darth Sidious is. He tells the two women, along with Captain Rex, that the Jedi Council suspects Sidious to be the architect of the Clone Wars. He also laments Count Dooku’s death at Anakin’s hands, as they wanted to question him further about Sidious. When Ahsoka asks for reinforcements, Obi-Wan reveals to her in private that Anakin is on a secret mission to spy on Chancellor Palpatine. Ahsoka remarks that, given Anakin’s relationship with Chancellor Palpatine, he probably doesn’t like the post he’s been granted. Obi-Wan agrees and asks Ahsoka to talk to him, a request she doesn’t appreciate in light of her departure from the Jedi Order. However, their conversation is cut short when Rex comes back in. She goes with him and finds one of the clones, Sterling, dying. He tells her that Maul took Jesse.

Meanwhile, Maul questions Jesse, using the Force to gain information on Ahsoka. He tells Far Saxon to prevent Prime Minister Olmec from becoming an asset to the enemy. Ahsoka and Bo-Katan speak with Olmec, asking what Maul’s escape plan is. He tells them that Maul has no intention of escape, being consumed with dread of what’s to come. He also tells Ahsoka, just before he’s killed by Saxon, that Maul wanted Skywalker, too. Ahsoka, Rex, and Bo-Katan find Maul in the throne room and he returns Jesse to them. Ahsoka tells Rex to take Jesse away just as things escalate outside. Maul encourages Bo-Katan to “take care of it,” insisting that he and Ahsoka will be fine alone. He enlightens Ahsoka to the threat Sidious poses, and remarks that only the two of them together can stop him before it’s too late. Ahsoka says she will help him, but he has to tell her why he wants Anakin. Maul tells her that Skywalker has long been groomed as his Master’s new apprentice; while Ahsoka believes Anakin can bring balance to the Force, Maul believes he exists to destroy. The two duel, with Maul observing that Ahsoka has Kenobi’s arrogance. He pins her down, nearly stabbing her with his saber, but she kicks him off of her and out the window. Saxon calls Maul and asks him for reinforcements, but he leaves his former ally to die, saying that his ship is here for him. Ahsoka catches up and the two again engage in battle. This time, Maul disarms Ahsoka, but he offers her yet another chance: “join me, or die.” She declines and pulls her blades to her, slicing his in half and pushing him off the railing. However, she holds him up with the Force as he screams at her to let him go so he can die. Rex and his men arrive with their gunships, knocking Maul out and taking him in.

Although it doesn’t last very long, I like the exchange between Obi-Wan and Ahsoka a lot. In one brief conversation, we get a decent look at what’s going on outside Mandalore, which clues us in on where exactly we are on the timeline. We also get a friendlier, less awkward talk between the former colleagues as Obi-Wan asks Ahsoka to help him reach Anakin. However, we as the audience know it’s more than a little too late for that. Anakin killed an unarmed (literally) man for no reason other than because he wanted to, and the Chancellor encouraged him. Additionally, as we know, the Council has made a pretty dumb mistake in choosing Anakin to spy on the Chancellor. I also wonder what it was that Ahsoka wanted Obi-Wan to tell Anakin, especially since he evidently knows what it is. Perhaps that she misses him, or regrets that they didn’t have much time to talk. It’s also cool to see Ahsoka meet Maul in person for the first time, and learn the rumors of Darth Sidious. I wonder if we’ll similarly get to experience the revelation that it was the Chancellor from Ahsoka’s perspective, let alone that her former Master and best friend becomes the monster she faces in the Rebels two-part season 2 finale, “Twilight of the Apprentice.” I’m sure there’s a lot of intrigue and action to come, especially as we’re only halfway through this arc, and the Republic forces have already captured Maul.

As an aside, it’s kind of a bummer that Maul’s imprisonment by his former Master Sidious is only mentioned in this episode. I understand that this was a 12-episode season, and they had to be choosy, but I would have taken that over the Raffa and Trace arc. We learn that Rook Kast, the female Mandalorian we see following Maul around, released him from Stygeon Prime, thus allowing his freedom and rise to power among the crime syndicates, as well as Mandalore. She’s also voiced by Vanessa Marshall, who played Hera Syndulla in Rebels, and whose familiar voice and name in the credits may have prompted me to freak out a little. Regardless, it’s a bit frustrating to show season 5, episode 16, “The Lawless,” in which Darth Sidious kills Savage and takes Maul prisoner, and then just bring Maul back in two seasons later and explain it in a line of dialogue. I assume this was covered in the “Son of Dathomir” comic or elsewhere, but it’s not the same as showing the continuous flow of the story in the show. But I digress.

“The Phantom Apprentice” is every bit as good as “Old Friends Not Forgotten,” and in fact, I have a feeling the dialogue and action sequences from this episode may be remembered better. Maul delivers some grade-A monologues in “The Phantom Apprentice,” with Ahsoka and even Obi-Wan stating some hard truths. I also love Ahsoka’s passionate defense of Anakin in response to Maul’s visions of doom and gloom. It’s interesting because they’re both right; Anakin is an agent of destruction, but as we all know, he is nonetheless the chosen one and will ultimately bring balance to the Force. In-between Maul’s musings on the state of the Republic, the Jedi, and the imminent remaking of the Galaxy, “The Phantom Apprentice” has some of the best action in the series to date. We also get various different styles of combat, with the clone troopers on the ground, the Mandalorian warriors in the air, and Ahsoka and Maul all over the place. It’s worth noting that Ray Park, Darth Maul’s actor in The Phantom Menace, performed motion capture for the character’s swordplay choreography this season to ensure that they got his movements just right. When and if they bring Ahsoka to live-action, I hope they can display the same respect for Ashley Eckstein. I do have a couple of complaints, but one’s a nitpick, and the other isn’t even worthy of being mentioned. I found it odd how Bo-Katan complains about the Republic Forces and their occupation. She first remarks that the Mandalorian people won’t stand for it, then that she personally won’t. Mandalore is a fiercely independent system, but Bo-Katan literally asked Obi-Wan and Anakin to send help. Until the mission is complete, it seems a little ridiculous to tell them how much to help and how to do so. She seems like a difficult person to deal with in general, very much the opposite of her late pacifistic, diplomatic sister. So while this isn’t out of character exactly, it’s very frustrating from the viewer’s perspective as we see things more through the eyes of Ahsoka and Rex. Finally, I don’t like it when Ahsoka calls Bo-Katan “Bo.” This is extremely minor, personal, and not worth deducting points from an incredible episode. Still, I just wanted to throw it out there.

“The Phantom Apprentice” is a fantastic episode of The Clone Wars. It delivers the best the series has to offer in animation, dialogue, action, and characterization. There’s no way I’m not mentioning this week’s breathtaking musical score, courtesy of Kevin Kiner. Regardless of how we all felt about recycled episodes and seemingly pointless arcs this season, the Siege of Mandalore is shaping up to be one of the high points of an impressive series, if not its greatest story arc ever.

The Clone Wars – "The Phantom Apprentice"

“The Phantom Apprentice” is a fantastic episode of The Clone Wars. It delivers the best the series has to offer in animation, dialogue, action, and characterization.Regardless of how we all felt about recycled episodes and seemingly pointless arcs this season, the Siege of Mandalore is shaping up to be one of the high points of an impressive series, if not its greatest story arc ever.