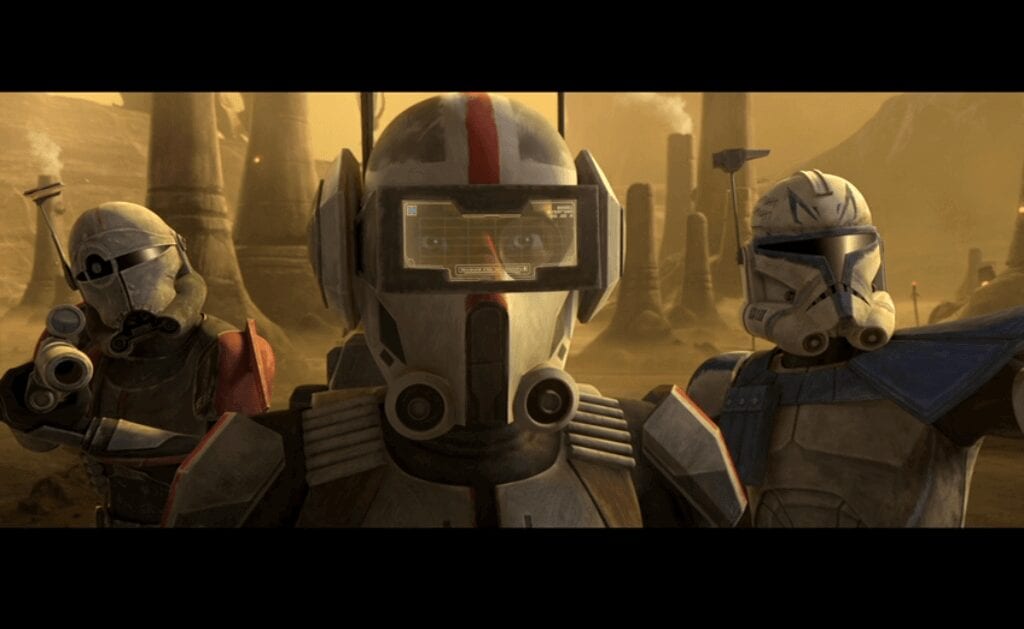 In “A Distant Echo,” Rex discusses the possibility that Echo is alive with Anakin and Hunter. Anakin cuts the conversation short so he can contact Padmé, with Rex guarding the door. Anakin confides in Padmé that he believes Rex is being guided too much by his emotions. She replies that Rex likely learned that from working alongside Anakin and that he should be by Rex’s side, as Rex has always been for him. This meeting also ends abruptly, as Rex gives the cue that Obi-Wan has arrived. Anakin’s old master tries to hinder the mission to Skako Minor, but Anakin has already made up his mind to follow Rex’s clue. Obi-Wan remarks that Anakin should have told Padmé he says hello, implying that he knows about their relationship. Once Anakin, Rex, and the Bad Batchers are on Skako Minor, the locals, called Poletecs, start landing on top of their ship. They ride on flying reptiles and capture Anakin, taking him back to their village. The Troopers follow him and Tech translates for the Poletecs. Their leader claims they only took Anakin because they don’t want the war to come to their planet. Rex replies through Tech’s translation that they’ve only come to rescue Echo. 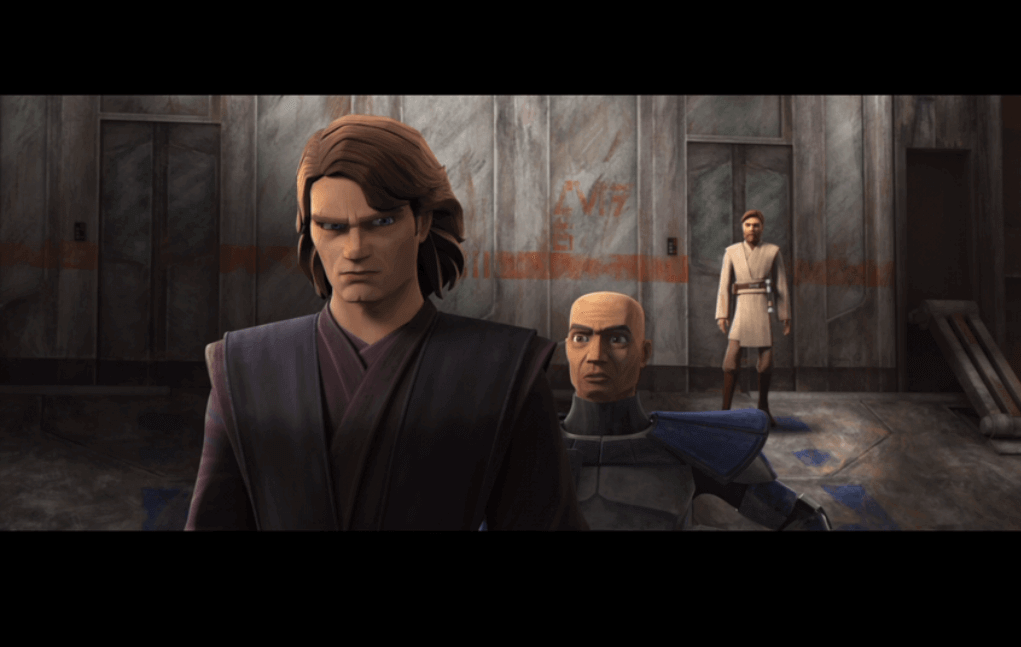 The leader offers to help them find Echo. Meanwhile, Minister Wat Tambor receives a transmission from Admiral Trench informing him that the troops are on their way. The leader Poletec guides the troops out of the village and points them toward the source of the signal. The Bad Batchers believe Echo is dead and that Rex is acting too much on emotion, and this causes a fight to break out. Anakin sends the Batchers to scout and tells Rex that he must prepare himself for the possibility that Echo really is dead. They continue on and, once inside the Separatist installation, they split up and begin searching every room. Minister Tambor appears to the clones via hologram and insists that he’s been using an algorithm for his strategies, not a prisoner of war. He sends battle droids in to fight the clones. Anakin and the troopers cut through the droids, and Tech opens the door to the control room for Rex. Once inside, they find a pod containing a lifeform. Rex does find Echo within, but he’s not quite like he remembers him. Nonetheless, he reassures him they’ve come to take him home. 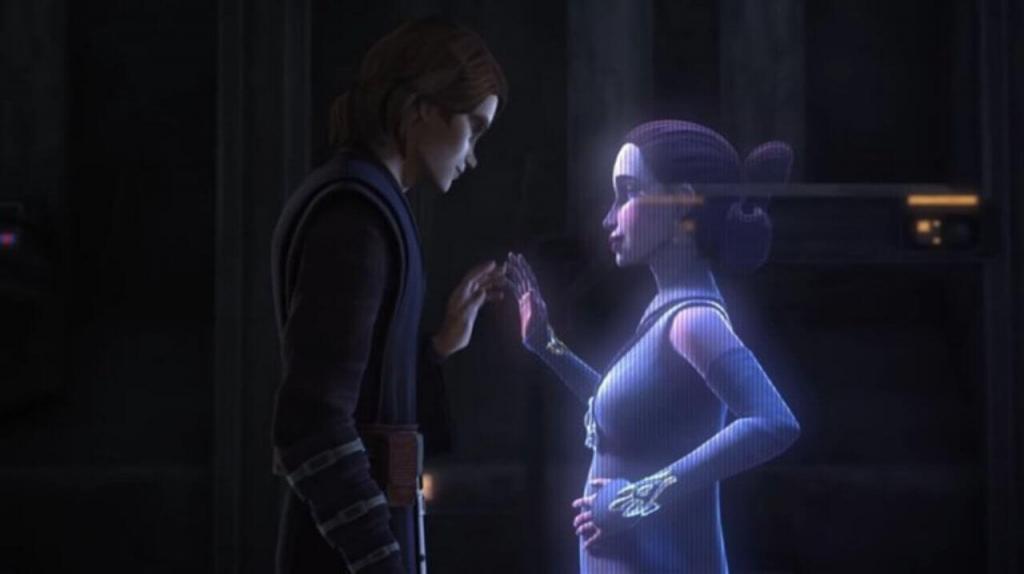 “A Distant Echo” is really gorgeous to look at, and we get an exotic new locale in Skako Minor, the planet that originated the signal Tech intercepted in “The Bad Batch.” The atmosphere and background are rich with detail and depth, and random objects like plants look great as well. I love how the characters look in this episode, too. Whenever Rex has his helmet off, you can see the pain and confusion in his eyes. Now that he’s found his lost brother, I can’t help wondering if Echo would have been better off dead after all. Anakin warned Rex to be prepared to accept Echo’s death, but now I question how everyone else will take him being alive and in this state. Obi-Wan looks like a smoother version of his design from earlier seasons, and it’s good to see his sass is still intact. Anakin looks incredible this season as well, like a cross between his earlier Clone Wars design and his appearance in Revenge of the Sith. This season is supposed to lead directly into that movie, so his design makes sense on top of looking great. Although it was short, I really liked the scene where he confers with Padmé and she advises him on the mission. I’ve mentioned this before, but this series excels at giving these two the kinds of interactions and conversations that were sorely lacking in the prequel trilogy. When they argue, it’s actually about something, and there’s a warmth there as well. The scene with Obi-Wan also highlights how this show digs into his dynamic with Anakin. The two essentially bicker throughout Attack of the Clones, and then they’re suddenly big pals and even equals in Revenge of the Sith. Well, okay, for the first half or so of Revenge of the Sith. One of the great things about The Clone Wars is that it’s had more time to explore the complexities of these relationships. After all, for me personally, it’s difficult to understand why anyone would stand by Anakin going just off of the movies. Even the most toxic personalities have to have some charm or other appealing traits. Otherwise, one would assume any potential friends or partners would steer clear. 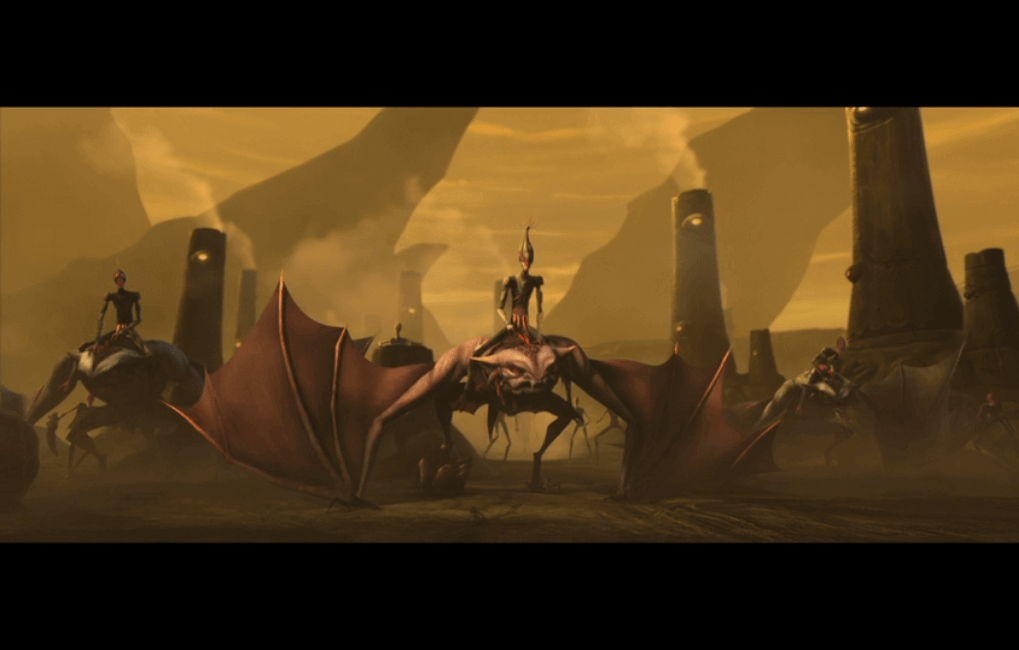 “A Distant Echo” is quick enough to get to the point in getting Anakin, Rex, and the Batchers to Skako Minor. I like the designs of the Poletecs, as well as their village and the reptilian mounts they ride. While they were initially belligerent towards their uninvited guests, they’re happy to help once it’s clear what everyone wants. They continue to re-introduce already established villains with Wat Tambor, which is probably for the best with only 12 episodes this season. While Admiral Trench was created for The Clone Wars, Minister Tambor was actually first seen in Attack of the Clones. He then later appeared in Revenge of the Sith, The Clone Wars, and various video games. Although you can only do so much even with a serialized TV show, I do kind of wish we knew more about Tambor as a character. He is shown time and again doing horrible things like occupying the Ryloth system, but it would be cool to know more about his motivation. Why is he willing to commit various atrocities, up to and including torturing and mutilating prisoners of war, without a second thought? This is really nitpicking, and he’s not that major of a character anyway, but maybe they could write a book about his early life down the road.

Usually, I’m opposed to “dead” characters being “revived” or not really dead at all, but this is a unique case with Echo. In season 3, episode 19, “Counter Attack,” Echo was presumed dead after an explosion on the mission to rescue Jedi Master Even Piell. However, all we ever see is what Rex sees: Echo’s tattered helmet rolling away from the site of the bombing. This is why Rex is so eager to believe Echo is alive in the first place; although the evidence was there, he didn’t see him die. Furthermore, a lot of characters die in this show. From the very first episode of the first season, Jedi and clone troopers die left and right all the time. This is a war, and The Clone Wars demonstrates better than the movies what the costs of war are. So the fact that one clone who was presumed dead made it doesn’t really seem that unlikely, given how many of them die regularly. It also makes sense that, if he survived the explosion, the Separatists would want any intel he may have. 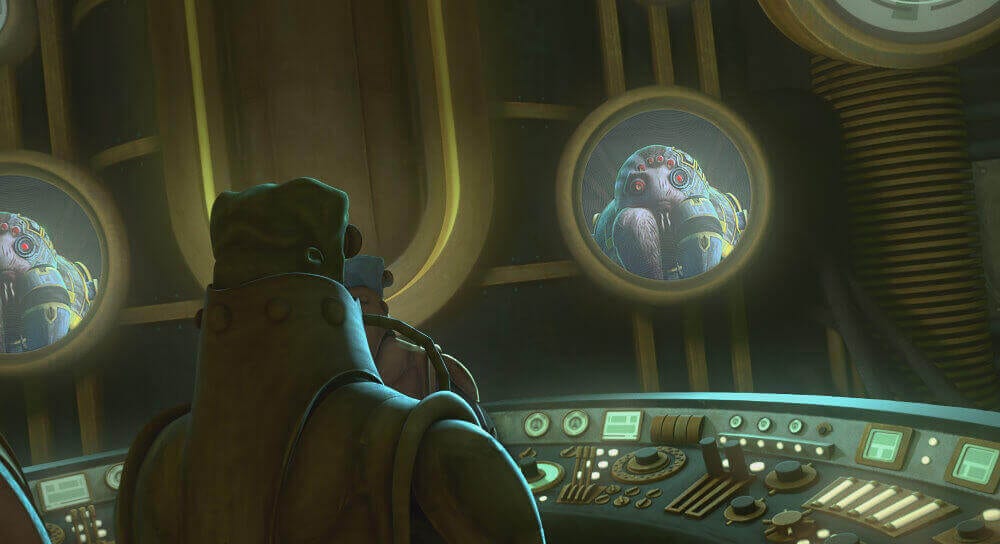 Along with the character of Ahsoka, the clones are one of the best things about this show. Although they were introduced in the movies, it’s The Clone Wars that makes the troopers feel like actual individuals, like real people. In the very first episode of season 1, “Ambush,” Yoda tells his clone squadron that he sees them all as individuals in the Force. Although they share DNA, each is a unique individual within the Living Force, and this is driven home time and again in the show. What really amazes me is the emotional connections between the clones and the way we connect with them as the audience. Never once did I feel anything when clones died in Attack of the Clones or Revenge of the Sith. However, when Echo is seemingly dead (or alive), it’s as shocking and emotional to see as it is for Rex. Even the named clones in the movies like Cody feel more significant after you see their exploits in The Clone Wars. 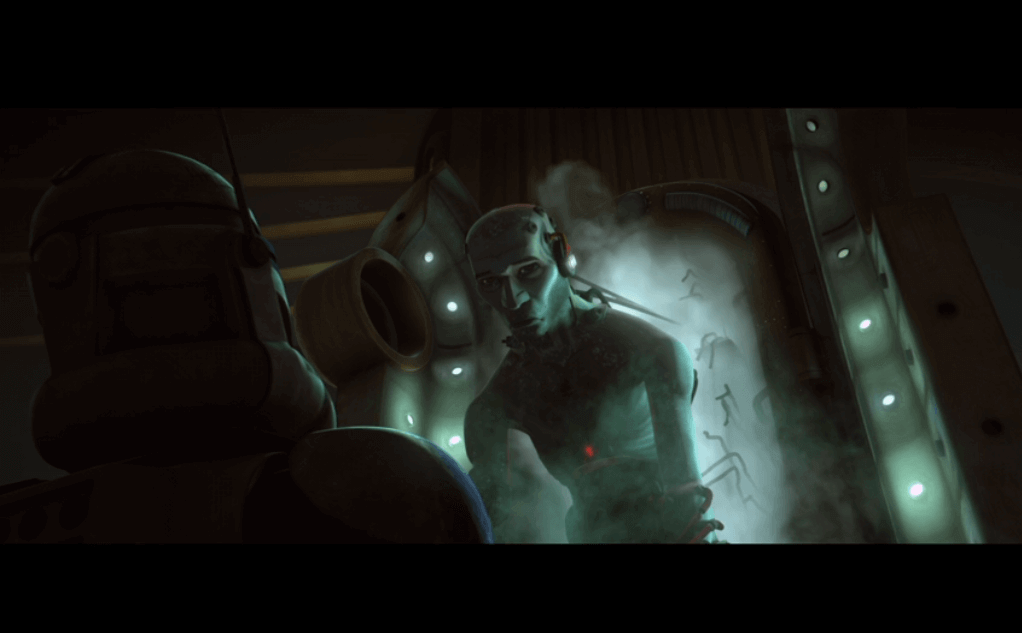 Overall, I really enjoyed “A Distant Echo.” I think the title of the episode is clever, the animation is gorgeous, and the interactions between the characters strike all the right emotional chords. Seeing Echo in this mutilated form is sad, and it’s quite a payoff to what “The Bad Batch” promised. I continue to like the Batchers, although their taunting of Rex regarding Echo comes off as morbid and hateful at times. Just as intended, they’re rough around the edges. I also loved smaller moments with Anakin and Padmé, as well as Obi-Wan, and I hope we get more scenes like this throughout the season. I’m excited to see what they do with Echo in the coming episodes, and just interested in seeing how the overall story develops from here.

The Clone Wars – "A Distant Echo"

"A Distant Echo" is an excellent of The Clone Wars and just great Star Wars in general. Characters come first and foremost in a story filled with action and intrigue.