REVIEW: The Clone Wars – Season 7, Episode 3, “On the Wings of Keeradaks” 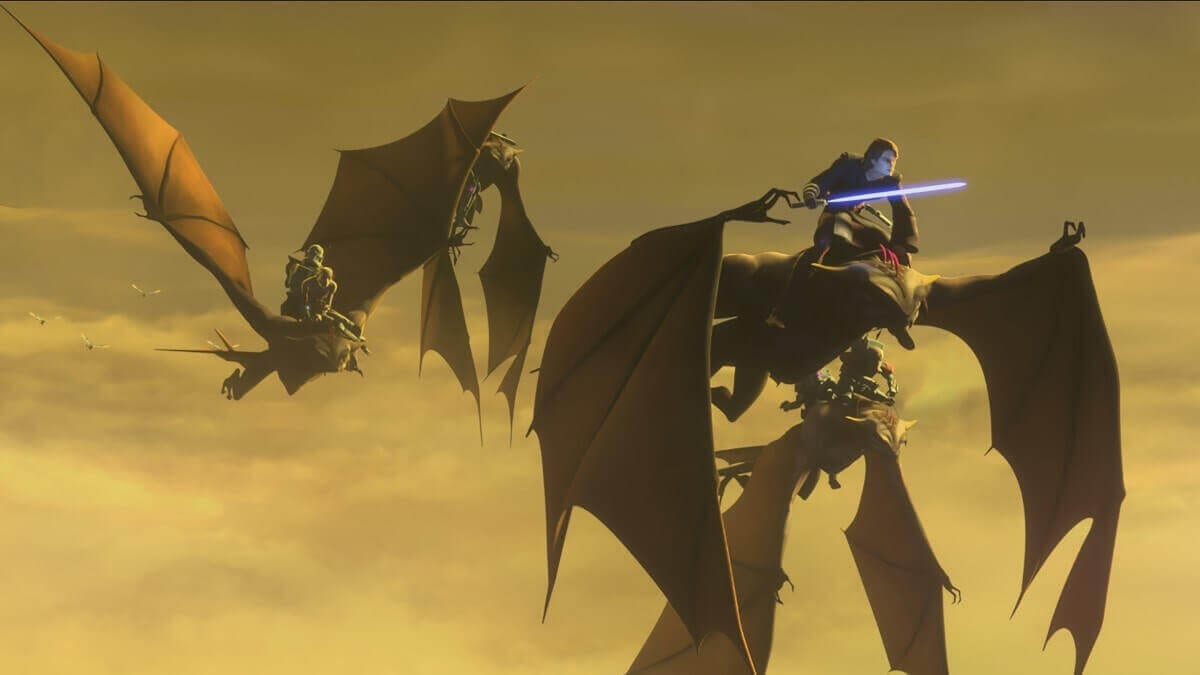 This week on The Clone Wars, Anakin, Rex, and the Batchers bust Echo out of Wat Tambor’s lab. Picking up right where “A Distant Echo” left off, the guys are surrounded by Tambor’s battle droids. Echo informs them of a ventilation shaft above the lab, and then of a way to escape the compound. However, the escape route leads them outside and across a very narrow bridge, and soon, they’re again surrounded by droids on all sides. Tech uses a recording of the giant flying reptiles (Keeradaks) to attract some for transportation. It works, and everyone jumps on the backs of the winged creatures. They fly back to the Poletec village, their arrival prompting the Chief to question why they returned. Tech translates Anakin and Rex’s apology for bringing the war to the village. However, they say, Wat Tambor isn’t really neutral and took Echo’s freedom, turning him into a machine for the Separatists. Flying droids catch up to the troops and the Poletecs fight alongside them, the Chief later saying that the Jedi will always have a friend among his people. Rex apologizes for what Echo went through and how long it took to find him. The two express hopes that things will be just like old times. 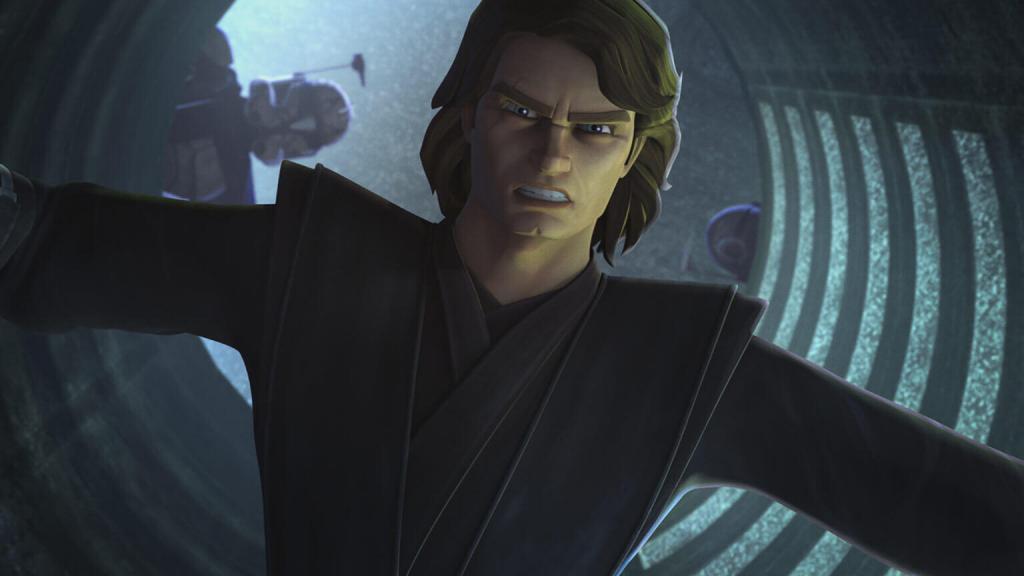 “On the Wings of Keeradaks” is only about 18.5 minutes long, which is very short for an episode of The Clone Wars. For reference, the previous two episodes each ran between 24 and 25 minutes. As I’ve said before, I didn’t watch the original animatics of the Bad Batch storyline. As such, I’m not sure how long this episode was in that form. I don’t want to moan and groan about this, and it’s not a huge deal, but it’s kind of a bummer to wait a week for an episode that’s about 25% shorter than usual, and I question why they did it this way. I almost wonder if they removed something from this episode, kind of like pulling the Padmé nose-art from “A Distant Echo.” However, in that case, they replaced a mid-tier gag with an excellent scene (Anakin contacting Padmé via hologram) that progressed the story and characters. “On the Wings of Keeradaks” is just noticeably shorter for whatever reason, and I wouldn’t complain if Dave Filoni or even Star Wars Download offerED some explanation. That being said, maybe of the four episodes in the arc, this one just covers the least story. I suppose only time will tell if there even is a reason. 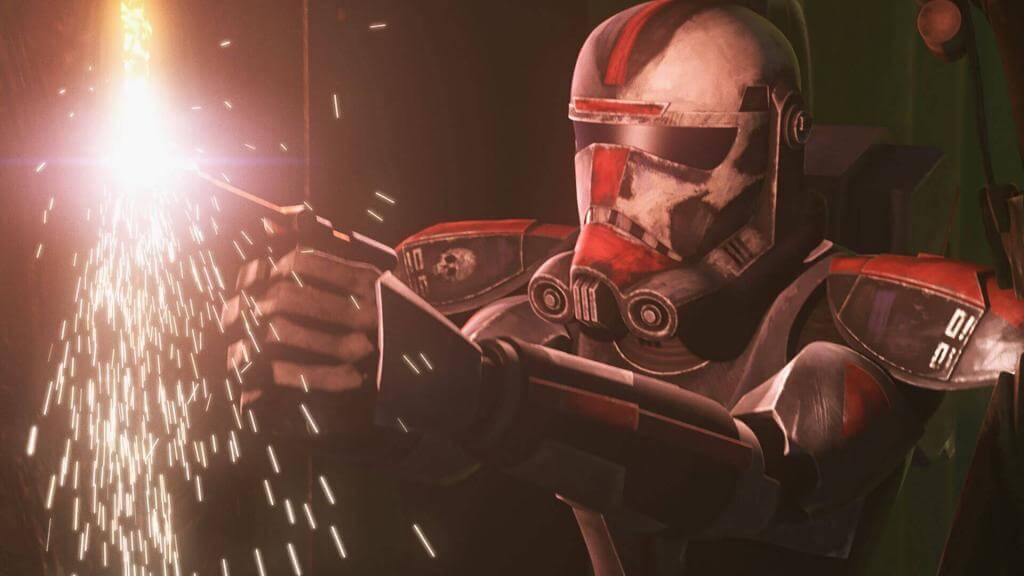 This being said, I enjoyed what we did get in “On the Wings of Keeradaks.” It is again really creepy and disturbing when Rex has to manually unhook Echo from the machine’s tentacles. It’s unnerving waiting for Tech to give him the go-ahead, having to disconnect Echo’s interface from the computer before he can be safely released. This episode is also packed to the gills with action. We’re treated to more of the gorgeous visuals this season has been delivering as well. The landscapes, plants, lighting, and the overall atmosphere is incredible to behold. Although this season is exclusive to a streaming service, I’m nevertheless in awe at this quality of CGI being produced for television. The dialogue is natural, and the actors deliver it quite well, even if there’s little new information revealed. Technically speaking, The Clone Wars is like a well-oiled machine, and I have no major issues with the quality of “On the Wings of Keeradaks.”

However, the shortened runtime ties into something that’s weighing on my mind. Ever since “The Bad Batch” premiered two weeks ago, and to a lesser extent, even before its release, people have been grumbling about this arc being re-released as new content. I didn’t feel the same way both because I hadn’t seen the animatics previously and because the first two episodes were particularly strong and emotional. Even still, it doesn’t bother me that the episodes were finished, improved in some ways, and released on Disney+. What gets me is that, if this really is our final 12 episodes (of a show that’s been canceled and revived twice, mine you), there definitely needs to be a sense of finality here. This is the third episode both in the Bad Batch arc and the season in general. So, this story is almost over while we have a ways to go in the season, of course. It just feels like very little actually happens in “On the Wings of Keeradaks,” both in terms of story and character development. The previous two chapters did a lot both for the plot and its players. Meanwhile, this week’s episode just felt like a bridge to the next. It’s sort of like the bridge Anakin and the clones fail to cross. This being said, as I mentioned earlier, this episode is technically very well done, and I enjoyed watching it. It just feels very light even compared to the ones directly preceding it, and for once, I feel like there isn’t a whole lot to discuss. With this show, in particular, that’s disappointing.

Regardless, I’m sure next week will be more eventful, and I personally doubt Echo will make it out of this arc alive. It may be morbid, and maybe I’ll be wrong, but something’s definitely off with him. Of course, he still has all of Tambor’s Techno Union wiring inside him. Additionally, the way he looks at Rex and replies that it will be just like old times is unsettling. In “On the Wings of Keeradaks,” Echo’s connection to Tambor’s system proves to be useful. He can remember blueprints for the lab and the surrounding building, and this may mean he can similarly tap into Separatist battle plans. This would be a great case of giving them a taste of their own medicine, being that he was being used to crack clone codes and battle strategies. But this leads me to speculate as to whether Tambor can somehow reconnect with his former prisoner to control or spy through him. Or, perhaps, Echo could even be too damaged or different to ever return to his former life.

“On the Wings of Keeradaks” is a solid episode of The Clone Wars, but not a great one. This episode covers ground that has to be tread, guiding the team out of Tambor’s lab and back to their own ship. But unlike “The Bad Batch” or especially “A Distant Echo,” “On the Wings of Keeradaks” has very few meaningful character moments and it doesn’t introduce any unknown or exciting information to the overall story. It’s an enjoyable-but-fleeting adventure with these characters. Personally, it just made me more eager for the next episode. The episode’s epigram, “Survival is one step on the path to living,” could serve as a metaphor for this episode itself, a necessary step on the way to better things.

On the Wings of Keeradaks

"On the Wings of Keeradaks" is excellent in every technical sense. However, the story is slight and the characters static, especially compared to the two preceding chapters.