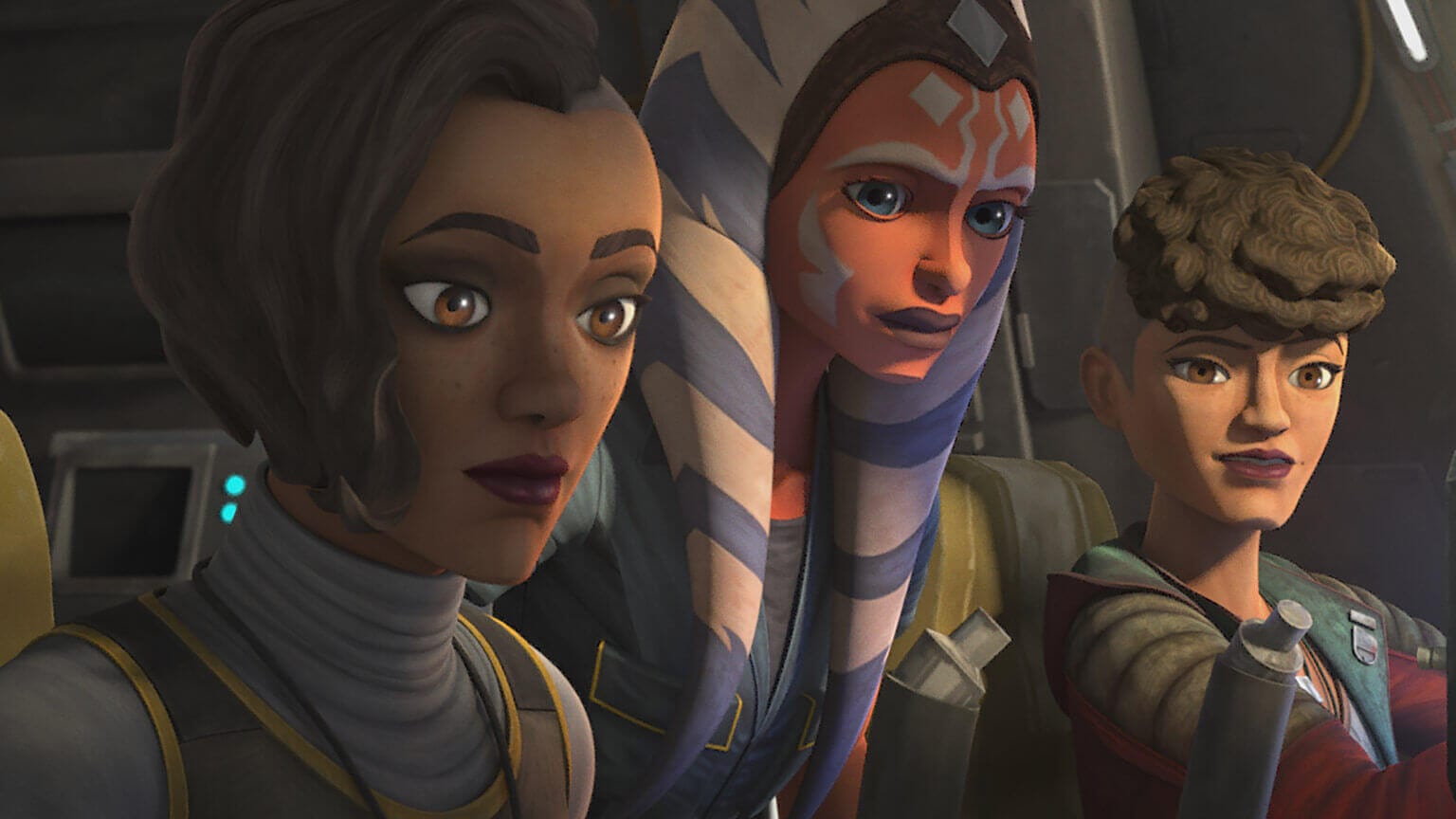 “Deal No Deal” begins with Trace and Ahsoka working on Trace’s starship, which she names The Silver Angel. Raffa comes in and asks Trace to be her pilot for an important mission, and Trace and Ahsoka reluctantly agree. The three take off and are soon hailed by Admiral Yularen, but Anakin senses Ahsoka onboard and assures him the ship is harmless. They arrive on Kessel and are greeted by an emissary of the King. Ahsoka asks him what purpose the cargo, Kessel spice, is intended for. He reiterates what Raffa stated earlier: the spice is to be refined into medicine. However, once the trio picks up the shipment from the spice mine, they head to deliver it to the Pyke Syndicate. Ahsoka tells Trace about the Pykes and Trace panics, dumping their cargo into hyperspace. For once, Ahsoka and Raffa agree, both insisting that this was a rash decision on Trace’s part. Once they arrive to meet with the Pyke leadership, Ahsoka uses the Jedi mind trick to get their payment and escape without the crates being checked. However, as they attempt to fly away, the Pykes trap their ship, aware that the containers are empty.

The forest we see on the way to Kessel is absolutely gorgeous, as is the nebulous space the trio flies through. I was actually quite surprised to see the lush forest and opulent meeting house of the royal Yaruba family of Kessel. We saw back in season four’s Zygerrian slaver arc that the slaves of Kessel were stolen and ruled over by the wealthy elite, including the Zygerrian Queen, which made perfect sense. Even then, though, we never saw this gorgeous landscape and architecture. It really puts things in perspective to see the slaves working like dogs in the hot, sandy mines while individuals like the King’s Major-domo feast in ornate, well-stocked housing. “Deal No Deal” is another episode that’s beautiful to look at from start to finish. The character animation on Ahsoka and the Martez sisters is excellent in displaying their thoughts and feelings. The original musical score by Kevin Kiner is impressive, as usual, and very understated. I like this awkward position they’re putting Ahsoka in; she doesn’t really agree with what Raffa is doing, but has no right to stop her or the power to leave. One of my favorite scenes in the season so far comes when the Silver Angel arrives on Kessel. Trace comments on the massive number of droids at work on the mine, to Ahsoka’s reply that those are people, not droids. Raffa tries to soften the blow by insisting that they can’t be slaves or the Republic would have shut down the mines by now. Ahsoka mutters, “Yeah, you’d think they would” in reply. Ahsoka became disillusioned with the Jedi and the Republic in season five, when she was disbarred from the Jedi Order and put on trial for murder and terrorism. I like how, so far, this “Coruscant underworld” arc is reinforcing her disappointment in her former heroes and allies by bringing her face-to-face with the very people they’ve been neglecting. Ahsoka likely feels a little more than the usual empathy for the slaves, having briefly been one herself back in season four. 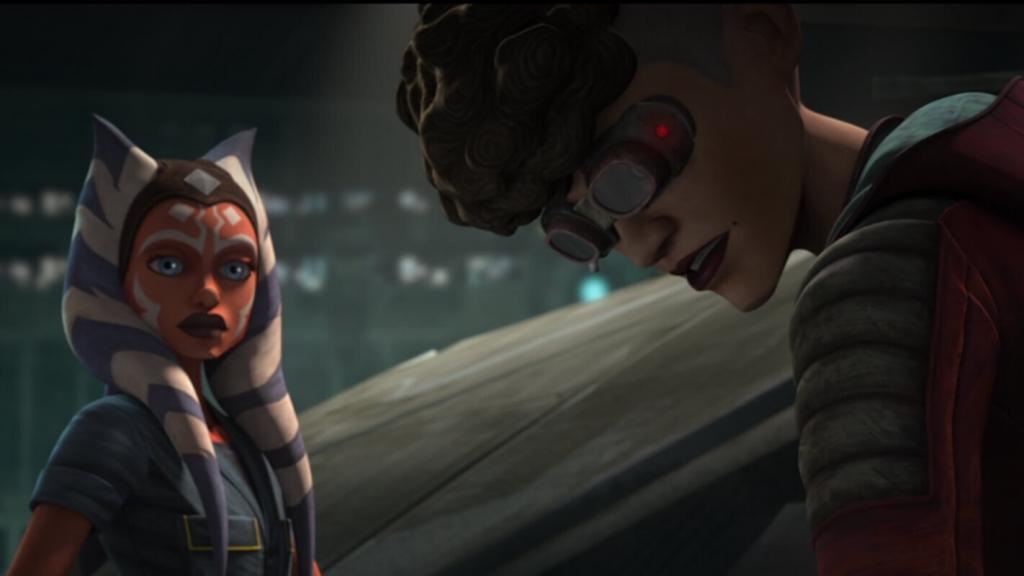 That being said, “Deal No Deal” also delves into just how naive Trace is when it comes to pretty much anything outside her home on Level 1313. “Gone With a Trace” established just how little the Jedi know of the ordinary people they should be working to help. Now, “Deal No Deal” further complicates the issue by showing how unaware these common people are of their surroundings. At one point, Raffa even asks Ahsoka how she knows so much about everything from starships to the military to the Pyke Syndicate. Ahsoka remarks that she observes her surroundings, of course, meant to imply that Trace is more than a little idealistic and unaware of the corruption around her. It seems as though Raffa does know exactly what’s going on and what she’s agreeing to do; she just doesn’t care as long as it doesn’t directly hurt her or Trace. Even then, I’m inclined to question how invested she is in Trace’s well-being. Raffa has no business asking her little sister to run this spice for gangsters. Even then, she never bothers to impress on her the dangers and importance of getting every step right. At one point, Raffa remarks to Ahsoka that everyone plays an angle, and she doesn’t mind, as long as it doesn’t involve Trace. This is really ironic; Ahsoka has done nothing but help Trace and protect her from Raffa’s enemies, while the latter has caused most of her problems. She tells Ahsoka she might be the trouble Trace needs to avoid just as she talks Trace into running a dangerous, valuable substance across the galaxy so gangsters can make drugs out of it. The hypocrisy on this one is tangible. I’m thinking she’ll eventually be revealed as an antagonist, and Trace will be forced to choose her new best friend or her sister.

They also draw an interesting parallel between the Martez sisters and the Pykes when Raffa asks the Pyke leader, Mar Krim, “You don’t trust me? You hired me!” and he answers that he trusts no one outside the Pykes. This is awfully similar to Raffa’s mantra: “We can’t count on anyone, so we count on ourselves.” She’s also frequently insisting that she looks out for Trace and finds her work when it seems very much to be the opposite: she uses her sister to meet her own ends and pay off her personal debts. In this particular case, it backfires, as Trace dumps the spice out into space so she can keep her ship and neither Ahsoka nor Raffa get their way. Of course, this is entirely counterintuitive, as dumping the product they were transporting is the number one way to lose her ship. Trace is naive and maybe a little impulsive, but this was a bit hard for me to accept. Sure, she’s young and not as experienced as Ahsoka and Raffa. However, I can’t believe she thought the best solution to her current situation was to ignore both of them and drop 30,000 credits’ worth of cargo. It was clear to see that she was panicking, but they were already on their way to the Pykes, and they already had a deal with them. Why would anyone’s first thought be to dump it all out?

I’ve already seen a lot of people compare this episode to Solo: A Star Wars Story or say they would make a good double feature. Honestly, I’m at a loss. Both stories see their leads visit Kessel and both involve Crime Syndicates, but The Clone Wars has involved the Syndicates before. The prequels even delved into the criminal underworld, albeit briefly and to no significant effect. Furthermore, I thought Solo was a disjointed mess with unlikeable characters, a frenetic plot that jumped around too much, and a forced Darth Maul cameo. “Deal No Deal” isn’t my favorite episode of The Clone Wars, but I’ve already watched it twice, and I never intend to see Solo again.

“Deal No Deal” is a very effective episode of The Clone Wars. It builds on the ideas and characters introduced in “Gone With a Trace” very well while bringing a much more serious threat into the fold. The animation is gorgeous as ever, and we’re treated to a very different side of the Kessel system we haven’t seen before. I don’t like how Trace just dumps her cargo at the first sign of trouble; I feel like there were other ways for her to mess up than to actively make such a bad decision. Regardless, I liked the episode, and I look forward to more.

The Clone Wars – "Deal No Deal"

“Deal No Deal” is a very effective episode of The Clone Wars. It builds on the ideas and characters introduced in “Gone With a Trace” very well while bringing a much more serious threat into the fold.