REVIEW: The Falcon and the Winter Soldier – Episode 2 “The Star-Spangled Man”

"Just because you carry that shield, it doesn't make you Captain America." 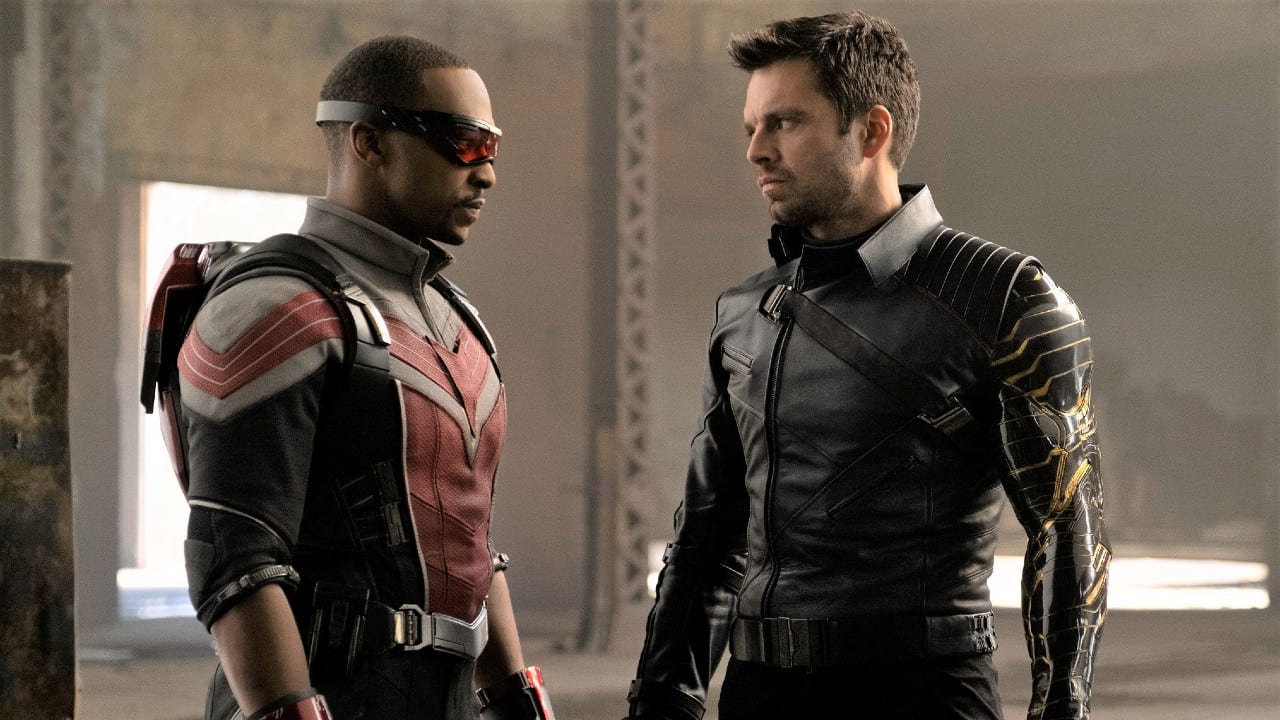 With “The Star-Spangled Man,” The Falcon and the Winter Soldier moves forward in some areas, but steps backward in others, with a net result of running in place. It’s certainly not as boring as “New World Order,” and it takes a surprising early route with a controversial new character, but it rushes its development and gets bogged down in hit-and-miss humor and heavy-handed race talk that feels forced into the narrative. It also proves, in finally getting its leads together, that these guys aren’t ready for prime time.

John Walker assumes Captain America’s mantle. Bucky finds Sam, and the two go after the Flag Smashers. Bucky shows Sam a secret he discovered while he was the Winter Soldier. Banter – and stilted arguing that the writers think is banter – occurs. 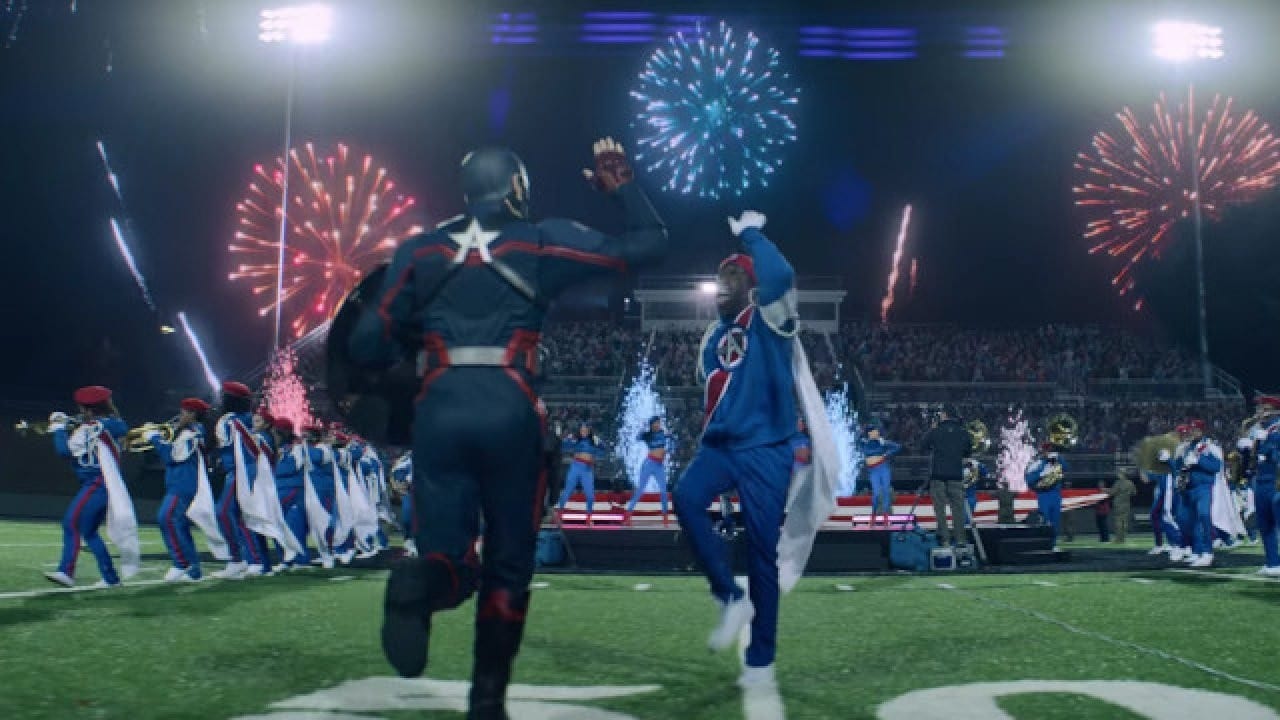 “The Star-Spangled Man” begins with a genuinely surprising scene: John Walker sits in a locker room before the announcement that he will be the new Captain America, feeling the weight of the responsibility the government is about to bestow on him. His wife and his best friend show up to congratulate him, and he confesses his fears and doubts to them. In-between their arrivals, he practices speaking with a voice worthy of the symbol he must now embody. He makes humble talk show appearances, fires up the crowd at a football game, and strives to be the man the country wants him to be. This is just what the character and the show needed because when he showed up in full costume last week, everyone instinctually hated him. Now, Walker is humanized, shown not as some smug interloper seeking power and adoration but as a genuinely good guy who wants to help. It’s a smart way to take the story; maybe there are no bad guys in this situation, and Walker will rise to the occasion, even if it shouldn’t be him holding the shield.

But it doesn’t last long, and while I like the trajectory Walker’s arc is taking, “The Star-Spangled Man” speeds it along too quickly. The idea is that Walker begins to enjoy being the symbol a little too much, and he grows arrogant and entitled the more comfortable he gets. But it’s fast-tracked so much that, by the end of the episode, it’s already clear he’s bad news.  For a show that took its time to a sleep-inducing degree in the premiere, it’s brushing past something that should have been a gradual turn. I’d have liked to see Walker slowly be corrupted by his position, to explore how even someone with the best of intentions can be consumed by power, especially after that great setup in the beginning. And it would have meshed perfectly with Sam refusing the role; what Steve saw in Sam wasn’t just a decent guy with good intentions, but someone who would endure the temptations that come with being given power. 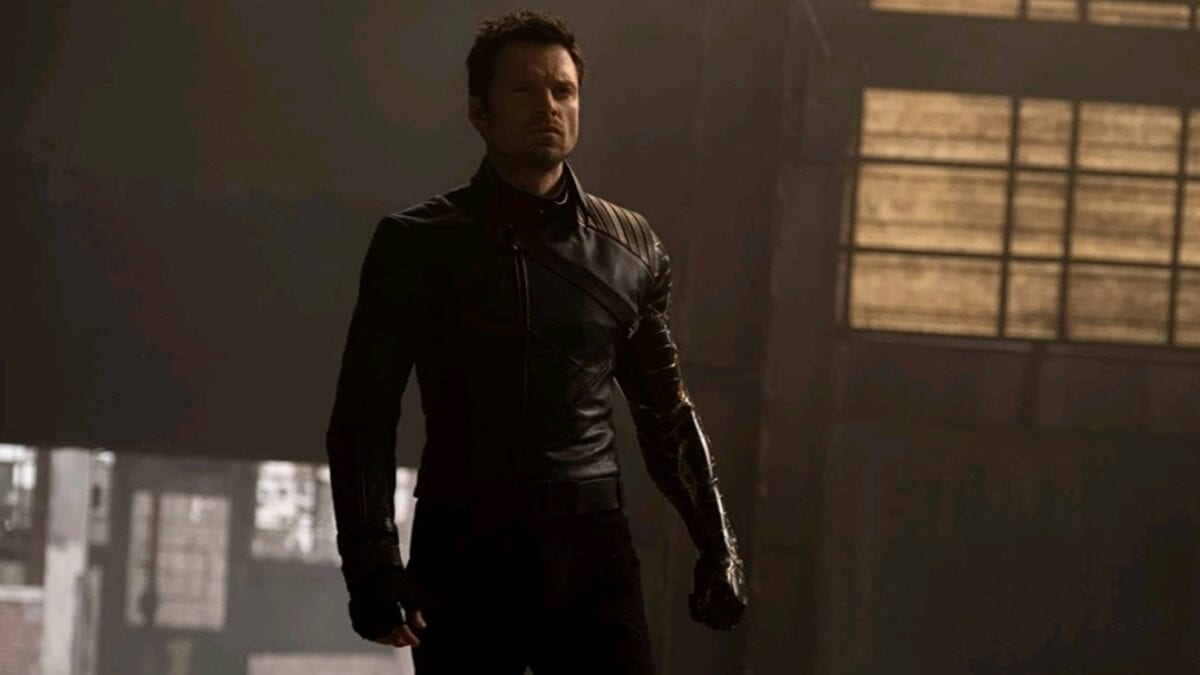 Or, in Bucky’s terms, Sam is a guy who understands what it means to jump on a grenade. “The Star-Spangled Man” makes it clear what Bucky thinks of Sam’s relinquishing the shield, and their disagreement becomes a new source of strife between the two frenemies. Once again, they’re loyal to Steve in different ways; Sam worries that he can’t live up to Steve, and Bucky knows he can’t, but believes Sam can. This is another good turn the series takes; the easy way of putting them into conflict would have been for Bucky to be jealous that Steve chose Sam over him, but it’s more interesting than that. Bucky fears that Sam may have made the correct decision, and if Steve was wrong about Sam, maybe he was also wrong about Bucky’s potential to be more than just an assassin. It turns out that Bucky and Sam are more alike than either knows: they’re both afraid of letting their best friend down.

Their fears are complimented nicely by a superb action sequence midway through “The Star-Spangled Man.” Sam and Bucky have found a shipment of stolen vaccines the anarchist group called the Flag Smashers is transporting via trucks. They hit the small convoy (do two trucks count as a convoy?) and quickly have their hash settled by the anarchists. The Flag Smashers are super soldiers, and they’re capable of putting up a fight with the erstwhile Winter Soldier, meaning the good guys are outnumbered. They fail in trying to carry out Cap’s work, and the main reason they fail is an error in judgment – namely the misidentification of a girl sitting in one of the trucks as a hostage instead of one of the Flag Smashers. They misjudged her like they’re afraid Steve misjudged them. And, while John Walker and his buddy Battlestar fail too, they fare better than Bucky and Sam, which must sting despite their insistence that Walker is wrong for the job. 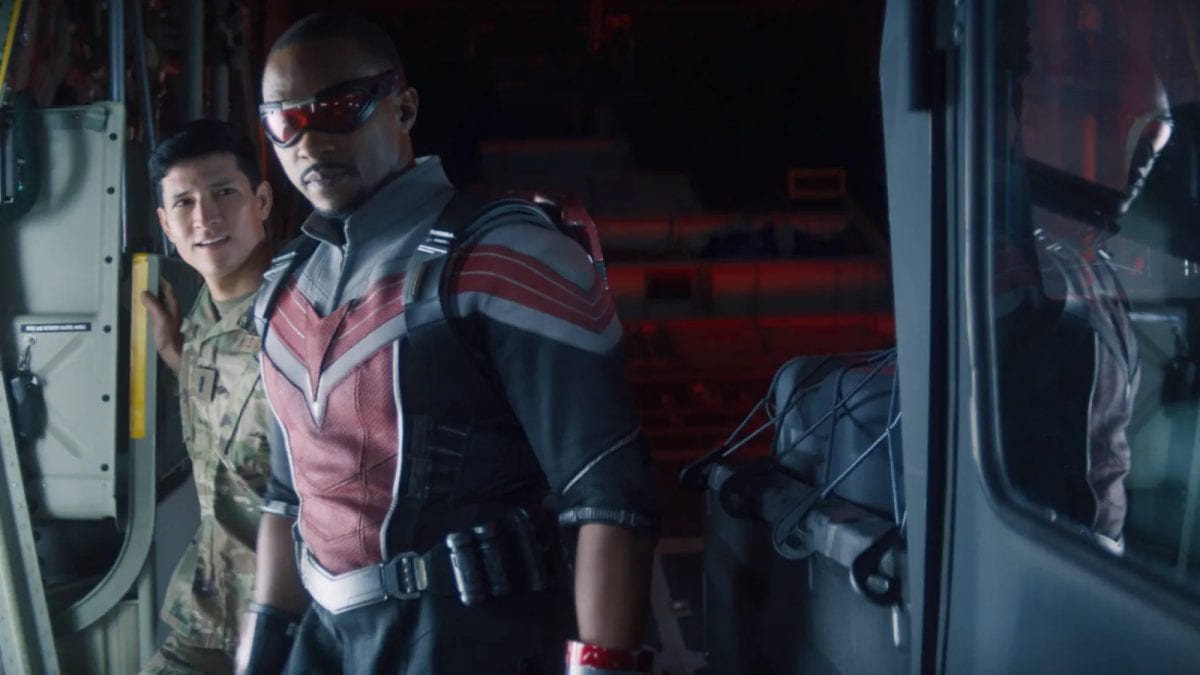 Unfortunately, some of the weight of this conflict is lost because “The Star-Spangled Man” makes it clear that Sam and Bucky are not meant to be lead characters. I wondered if I’d think differently about them once they began sharing the screen and the workload of carrying the show, but I don’t. They still feel like sidekicks, and the writing doesn’t help them by trying too hard to make them buddy cops. Some of their lines are genuinely funny, but others fall flat, and the relentlessness of their sniping at each other becomes overbearing. For example, when they’re in the warehouse watching the anarchists load the trucks, their back-and-forth gets so ridiculous that they start to look like idiots. In Civil War, they traded insults, but not to the detriment of their mission. You could argue that this is the point and that it’s more evidence to them that they don’t measure up to Steve, but that doesn’t make for a compelling story.

Another apprehension of mine that “The Star-Spangled Man” confirmed is that the series will get bogged down in race. When it first comes up as a joke between Sam and a kid on the street, I thought that was a smart way to handle it, dismissing the notion of reducing someone to their skin color as ridiculous. Then, the show immediately took it back by introducing Isaiah Bradley (played by the excellent Carl Lumbly), who was a super soldier in the years following Captain America’s disappearance. He fought for his country, even tangling with the Winter Soldier, before being jailed and experimented on by the government. Nobody says why that happened or how he’s free now, but the important thing to take away from his story, according to Sam, is that there was a black super soldier. And as soon as he says this, a cop car pulls over and asks him for his ID while assuming he’s attacking Bucky. There are subtler Power Rangers episodes than this. Of course, as soon as the race angle is brought up, it’s dropped, and the duo set their sights on Zemo (a much more compelling villain than these waste-of-space Flag Smashers); it feels like the producers know that nobody really wants the race stuff, so they’re trying to have their cake and eat it too. 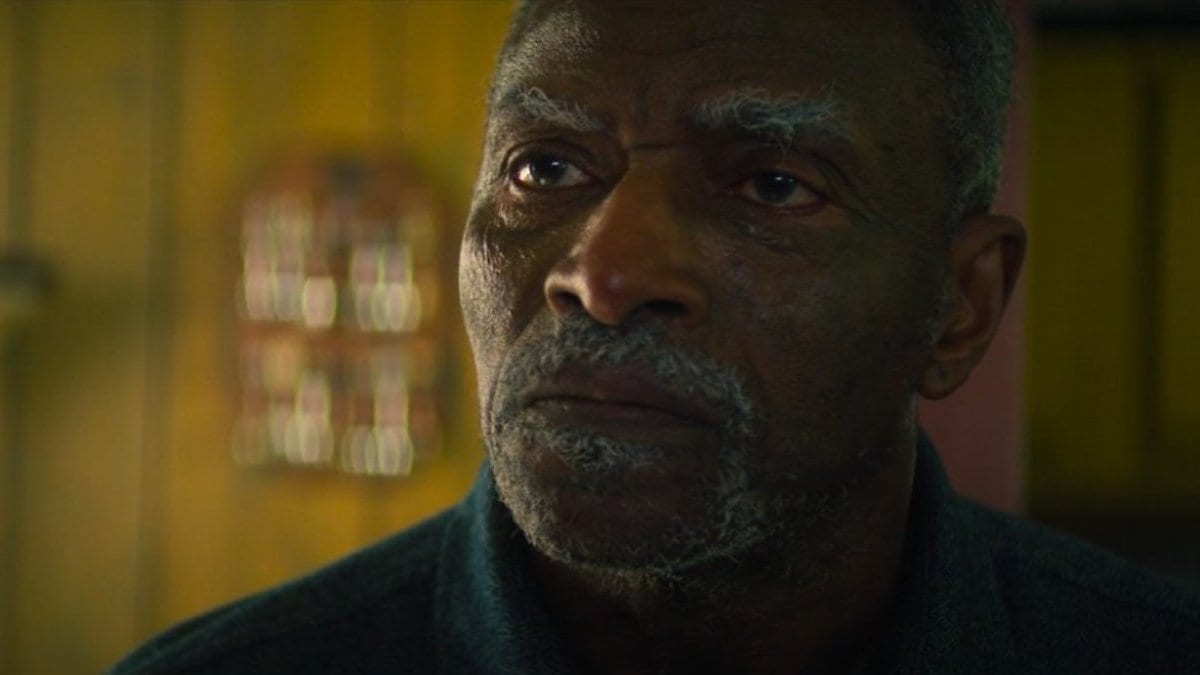 “The Star-Spangled Man” presents some interesting character development and has an exciting action sequence, but it rushes John Walker’s arc and muddles its racial themes while making it more obvious that the lead characters aren’t meant to be leads. This is another so-so episode from a show that’s shaping up to be a disappointment.

The Falcon and the Winter Soldier – "The Star-Spangled Man"

“The Star-Spangled Man” presents some interesting character development and has an exciting action sequence, but it rushes John Walker’s arc and muddles its racial themes while making it more obvious that the lead characters aren’t meant to be leads. This is another so-so episode from a show that’s shaping up to be a disappointment.

Your too kind it’s going into a black hole fast

I tried to be optimistic, but it doesn’t look good. They’re going to need a lot of spectacular action to make up for all the show’s shortcomings, and I don’t see that happening.

I liked it. I felt like the race thing was actually done really well, and Isiah’s story is actually completely believable. Remember, the government (or at least shield’) was ran by literal nazis. It managed to touch up on the issue without being too preachy

I like this, I do a podcast on it, even though it’s different from yours, but I strongly respect your opinion

I gave the “Isiah Bradley” subplot the benefit of the doubt. But, I now feel like they could have pulled it off, without the racial overtones. For example, Bradley, sometime after his confrontation with Barnes, A.K.A. “The Winter Soldier,” would’ve been wrongfully implicated in an incident, which led to the deaths of fellow officers in the U.S. Army, during “The Korean War,” and sentenced to the 30 years that he spent in prison. Decades later, it would be reveled via the HYDRA secure files, which “Black Widow” released to the public, that the U.S. ARMY scientists, who experimented on Bradley, were HYDRA agents taking part in the organization’s plot to have him imprisoned for a war crime that he never committed, in order to duplicate the “Super Soldier Serum,” by stealing samples of his blood, against his will. But, when their attempts to do so end in failure, they would leave him to suffer, and rot, for the remainder of his prison sentence.