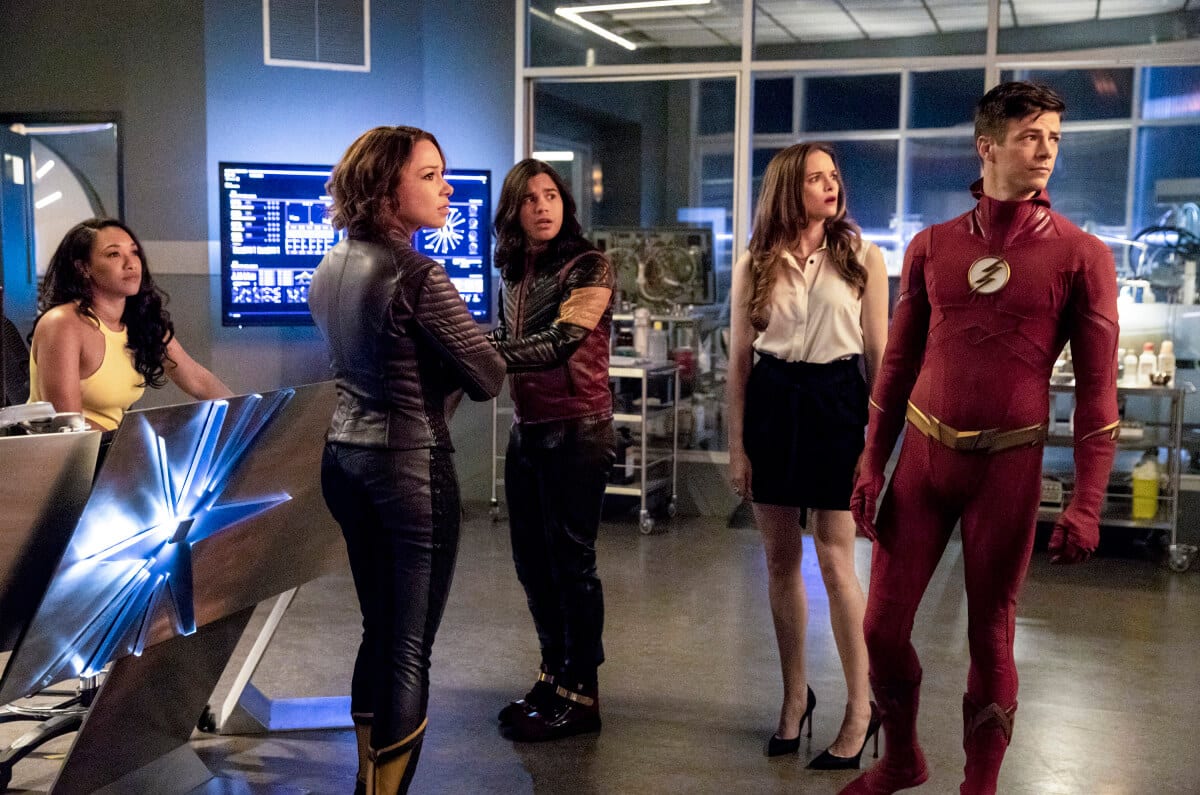 Taking the baton from the season premiere, “Blocked” begins with Nora and Barry revealing to the rest of the team the real reason for Nora staying in the present and not wanting to leave yet. The revelation that Barry will go missing sometime in the future and not return even after 25 years hits everyone, including Iris, despite her attempt to save face, noting they’ve changed the future a number of times already. (Cisco’s line, “We’re pretty good at handing the future its own ass,” is particularly funny.) This episode continues the setup of the season premiere by showing us more of the (as of right now) presumed season villain who had murdered and, presumably, absorbed the power from Gridlock at the end of the aforementioned kickoff. “Blocked” is aptly named for its villain-of-the-day, Vanessa Jansen, whose metahuman powers gift her the ability to manipulate the density of the molecules around her. She’s able to use this power to multifaceted effect, including generating an impenetrable shield around her to deflect gunfire and anything else that threatens her, trap her enemies within a cube of the highly-dense molecules (one that admittedly makes them look like they’re stuck inside a piece of candy), or, more sinisterly – crush the individual trapped within into a block of human ground beef. Big Belly Burger, anyone…?

Barry is learning the struggles of having a child who’s already a young woman in “Blocked.” After determining that having his and Iris’ daughter from the future stay in the present to receive some much-needed training, Barry soon gets a taste of just how difficult raising a child can be! Nora invites herself to tag along with Barry when he investigates the crime scene where they find Vanessa Jansen’s first victim. Nora tells Singh that she’s Barry’s CSI intern, hired on as a result of all of the case files that piled up while Barry was “on leave.” In Nora’s mind, she’s already a competent CSI, having come from a future where crime scene investigation methods and resources are demonstrably more advanced. However, that proves not so much to be the case as she underestimates just how much those scientific advances don’t apply in this decade. Iris, meanwhile, is struggling to find her place in all of this, now knowing the real reason why her daughter wants to spend all of her time at her father’s side and not with Iris. Feeling useless in all things Flash-related, and with the S.T.A.R. Labs satellite still out of commission, she sets out across Central City to investigate what had happened to the armored caravan that was supposed to escort Gridlock to Iron Heights. Returning to what she knows she’s good at, Iris does some investigative journalism by tracking down the guards who were injured when Gridlock was killed and is able to deduce from their stories that it was a targeted attack on the meta. 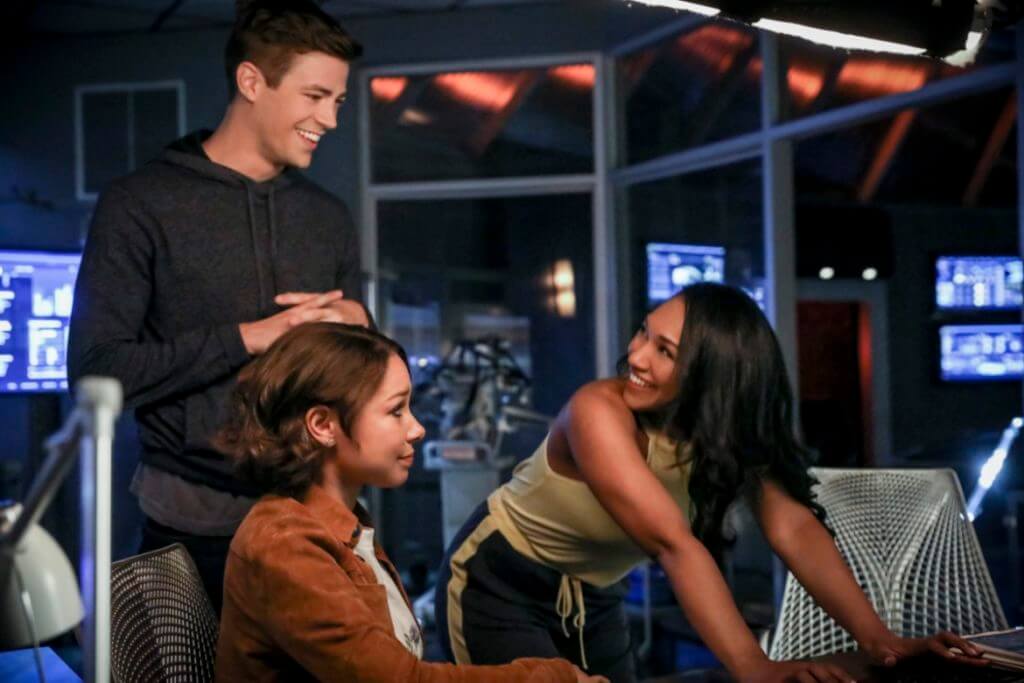 While the West-Allens are dealing with the unexpected early addition to their family in “Blocked,” the rest of Team Flash must face struggles of their own. Caitlin Snow decides to put her search for her father on hold in order to help Cisco get over his breakup with Gypsy and, by side-effect, regain control over his vibe powers. To do this, she comedically teams up with Ralph, who entreaties Cisco to mend his broken heart by following his “27 Steps to Getting Over the Love of Your Life.” This side story offers no shortage of laughs, as one could imagine with Ralph being involved, and the three team members show a synergy in their interactions that we had yet to see until now. Seeing Cisco as empty and emotionally detached as he is in “Blocked” is an entirely new place for the character to be in. Joe and Cecile have their own journey to go through as, upon coming to grips with the fact that she truly is losing her ESP powers, the new mother begins to become frantic with the uncertainty that not having a perfect mental link to their newborn will bring, and Joe tries to reassure his anxiety-filled wife that it’ll be alright and they’ll figure it out as they go. This ties in well with Barry’s own paternal struggles with Nora after she messes up a number of crucial times throughout “Blocked,” and he comes to Joe for advice. Joe gives a wonderfully love-filled, fatherly monologue on the merits of allowing children to grow through their own mistakes. Cecile’s listening in on this father-son heart-to-heart helps the frantic mother be at peace with no longer having an ESP connection with their child, and she resolves to trust in her maternal instincts, along with the help of her husband, who has already proven himself to be a wonderful father.

The climax of “Blocked” brings with it the revelation of the new villain, Cicada, who proves to be too much for our meta-powered heroes to handle. They receive a thorough handing of their own posteriors as the masked baddie uses his lightning-bolt-shaped dagger to negate all of Team Flash’s powers, rendering them helpless against the serial killer. Only when Nora arrives back on the scene after taking a critically injured Jenson to the hospital and shouts to her father as Cicada moves to stab him through the heart does the madman pause and quickly leave the premises. What about Nora’s calling out to Barry would cause Cicada to stop short of killing the Scarlet Speedster is a mystery, and mysteries seem to keep piling up, with Caitlin learning through Cisco’s vibe of her father’s falsified death certificate that her own mother was the one to sign it. With their newest foe – whom Nora reveals from her Flash Museum knowledge to have been one of the most horrific serial killers in history, already giving Team Flash a run for their money – Ms. Snow’s own familial conundrum, and Barry’s future fate of disappearing in the coming crisis (I’m still holding out hope that they’re going to do Crisis on Infinite Earths, which, based on the “red skies” line in the future article, I’m probably going to be right about), the S.T.A.R. Labs heroes have their work cut out for them. There was a lot more lightheartedness to this episode despite its build-up to the serial killer revelation, but that lighter tone was something that the series needed to get back to (especially with Arrow returning to its own darker roots this season). The hook is still there for this season of The Flash, and with any measure of fortune, it will stay that way, but we’ll just have to stay tuned for next week!

With a blend of lighthearted plot points and serious season-building, "Blocked" continues The Flash's strong Season 5 start. Things bode well for the show if it continues this trend of characters feeling more naturally placed and utilized, and I look forward to what's going to happen next more so than the last couple of seasons. The show just needs to step it up in the VFX department.