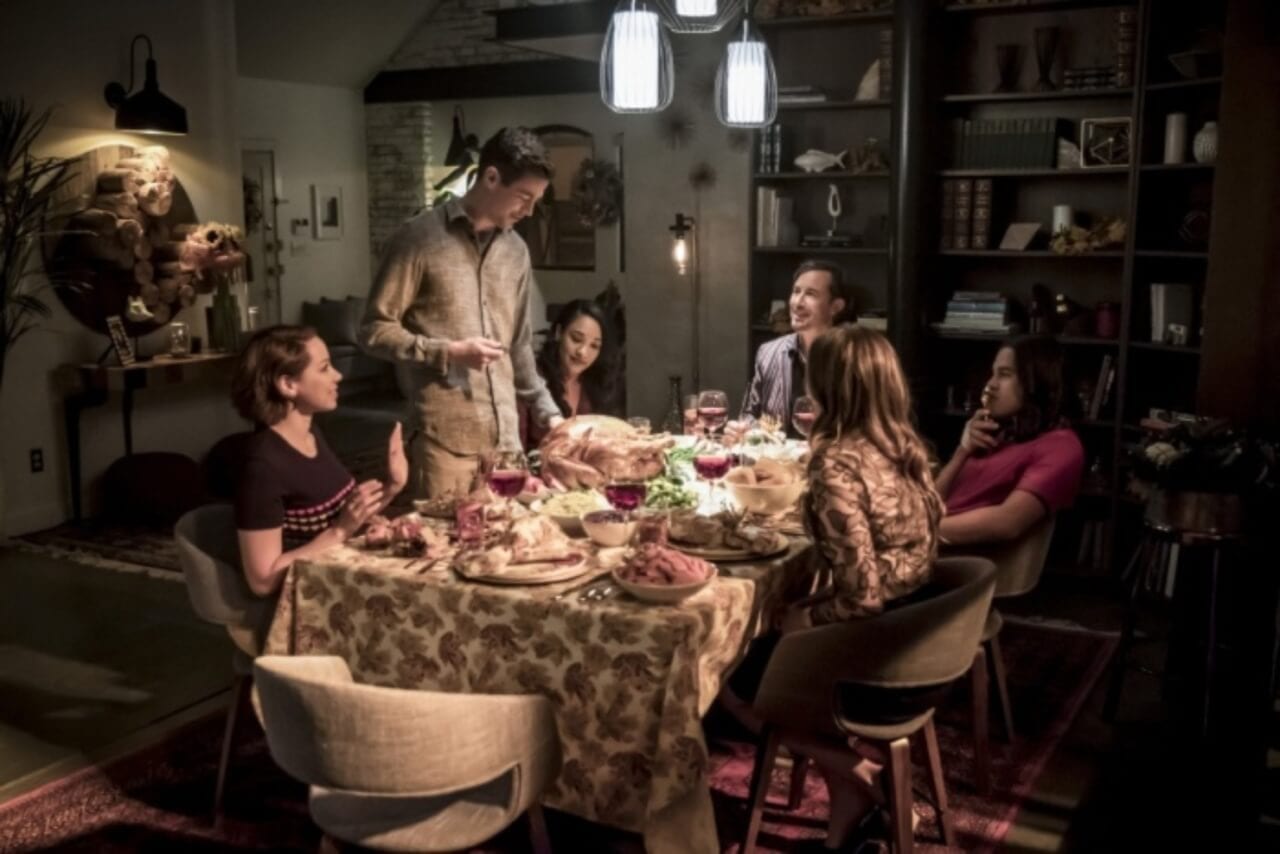 Holiday episodes are part and parcel of syndicated television. It seems that no matter what genre the show in question may be, eventually we get a holiday episode or two. This week brings Thanksgiving to the set of The Flash with “O Come, All Ye Thankful,” an episode whose plot focuses heavily on paternal relationships with their children, more specifically that of Barry and Nora, and Orlin (aka Cicada) with his adoptive daughter Grace. The central theme for Team Flash centers primarily on Nora’s newfound fear of losing her father in the line of duty. This anxiety manifests itself as frustration with both Barry and Iris in what Nora perceives as their willingness to constantly put Barry’s life in danger. The other parental tale is one that tells of how Grace came under the guardianship of Orlin after her parents were killed. At first, Orlin showed no desire to hold status as next-of-kin and take care of the young girl; in fact, he makes the opposite quite clear. But over time and a few flashbacks, we see him hum a different tune, and the presence of Grace softens his heart and leads him to make an honest effort to turn his life around. This all comes to a head, however, on the night of the Enlightenment when DeVoe’s satellite rains upon Central City. The shard of the satellite that would eventually serve as his lightning bolt-shaped dagger by which he murders metahumans is what caused the grave injury to his chest while Grace suffered hemorrhaging in her head and caused her to enter a comatose state. I’ll admit that I feel that the “tragic villain” is incredibly overused in stories today, and I feel no exception with Orlin here, but seeing him carry Grace into a crowded hospital while the shrapnel was still sticking out of his chest in “O Come All Ye Thankful” was quite the sight.

The villain of “O Come, All Ye Thankful” is the daughter of season 1 villain Mark Mardon (aka Weather Wizard), Joss Mardon. The Weather Witch is none too happy about her dad running off on her and her mother (with whom she also lacks a good relationship), and she uses her lightning rod witch’s staff to channel immense electrical power in an effort to kill her estranged father. The rainy days keep coming for families as Nora learns even more about how many close calls Barry has had with death, discovering the truth about Season 1’s singularity event, as well as his Speed Force imprisonment at the end of Season 3. Not wanting to lose her father again after having finally been given the chance to bond with him, Nora pleads with Barry to stop being the Flash and leave the life-risking to other heroes. It isn’t until the episode’s climax, when Nora witnesses her father hesitate in a potentially life-threatening scenario, and the effects of that, that she comes to an acceptance and understanding of why Barry is so willing to throw himself into danger – it’s for the sake of not only Central City’s citizens, but the safety and well being of his family and loved ones. 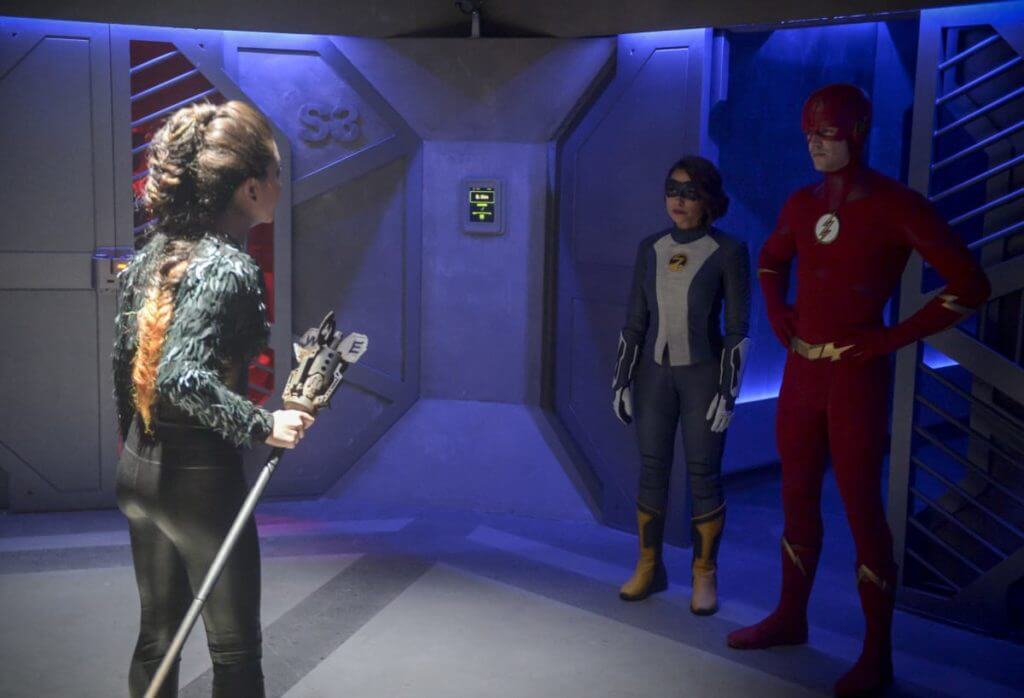 There are a lot of things that work in “O Come, All Ye Thankful” – for a holiday episode anyway – and a few that (for me at least) do not. We’ll tackle the good stuff first. At the start, Nora and Iris are at last on the same page – though of course, this hits a temporary speed bump with the whole “I don’t want you to be the Flash anymore, dad” bit. And this is refreshing because I, for one, can only take the teenage angst for so long. In “O Come, All Ye Thankful” we also see more, albeit little, of Barry and Iris on the same page and encouraging one another, as a married couple should. The interactions within Team Flash feel fluid and natural, and Cisco and Caitlin’s efforts to bring some holiday spirit to Sherloque Wells are lighthearted and enjoyable as well. The highlight of this little bit is when Caitlin goes frosty, and her cooler persona gives both Sherloque and Cisco a scolding (no joke, it was some real freezer burn). The main external conflict against the Weather Witch, Joss Mardon, brings with it some of the cooler-looking visual effects of the season; the way she blasts into Iron Heights (more like Porcelain Heights at this point, honestly) with the lightning generated by her meta tech staff and then flies away gives new meaning to the phrase “ride the lightning.” Additionally, when Barry squares off against Mardon at the end, the effects of him running against her lightning tornado in an effort to pull away the electrical energy and render her far less dangerous are pretty stellar as well.

The not-so-great certainly doesn’t ruin what is otherwise an enjoyable viewing experience; however, they do conduct away some of the episode’s good vibes. I mentioned earlier that I had a good laugh at Caitlin’s/Killer Frost’s remarks towards the drunken pair of Cisco and Sherloque Wells in “O Come, All Ye Thankful;” well, that whole sequence is nearly ruined by an entirely unnecessary (for me at least) griping about Thanksgiving as a holiday and its history. Furthermore, there is little to no weight behind Nora’s reaction to every time Barry is in danger. Sure, the characters aren’t exactly breaking the fourth wall here and, therefore, don’t know what the audience knows, and what we know is that Barry isn’t going anywhere yet (honestly, it’s been heavily overplayed, to the point where I worry that if the showrunners truly are attempting to build towards a “Crisis on Infinite Earths” scenario, its gravity will be lessened because of that very overreliance on Barry disappearing). But this feels like they aren’t even trying. I also touched on how I’m a little over the “let’s make the audience feel sad for the villain” bit, and at this point Cicada is certainly no exception. For one thing, he’s murdering people illogically in a serial killer manner, which, that right there kind of shuts off my sympathy meter, regardless of how touching it may have been seeing him bond with Gracie for 30 seconds. And, secondly, I’m sorry, the guy is a classic example of “remove the mask, ruin the villain.” I’m honestly not sold on the guy at all at this point. He’s not intimidating in the slightest, and his lines fall flat. When he still had the mask on and we hadn’t yet learned his identity, he was borderline creepy, if a bit derivative and a Diet Bane/Darth Vader Lite. Now? Now I’m wondering how they’re going to make me interested in the villain again. I’m still very much enjoying the show from a character perspective, with the deepening relationships and overall growth (still Team Iris, yay!), but I’m not feeling anything reminiscent of a looming threat just over the horizon, and that is beginning to worry me.

While the interactions between the rest of the main cast are enjoyable, Season 5's big bad is looking less like a serial killer and more like a tried and tired tragic villain. The last few episodes have already deviated away from him as a focal point and this week did nothing to reconcile that and make him a threatening presence again.