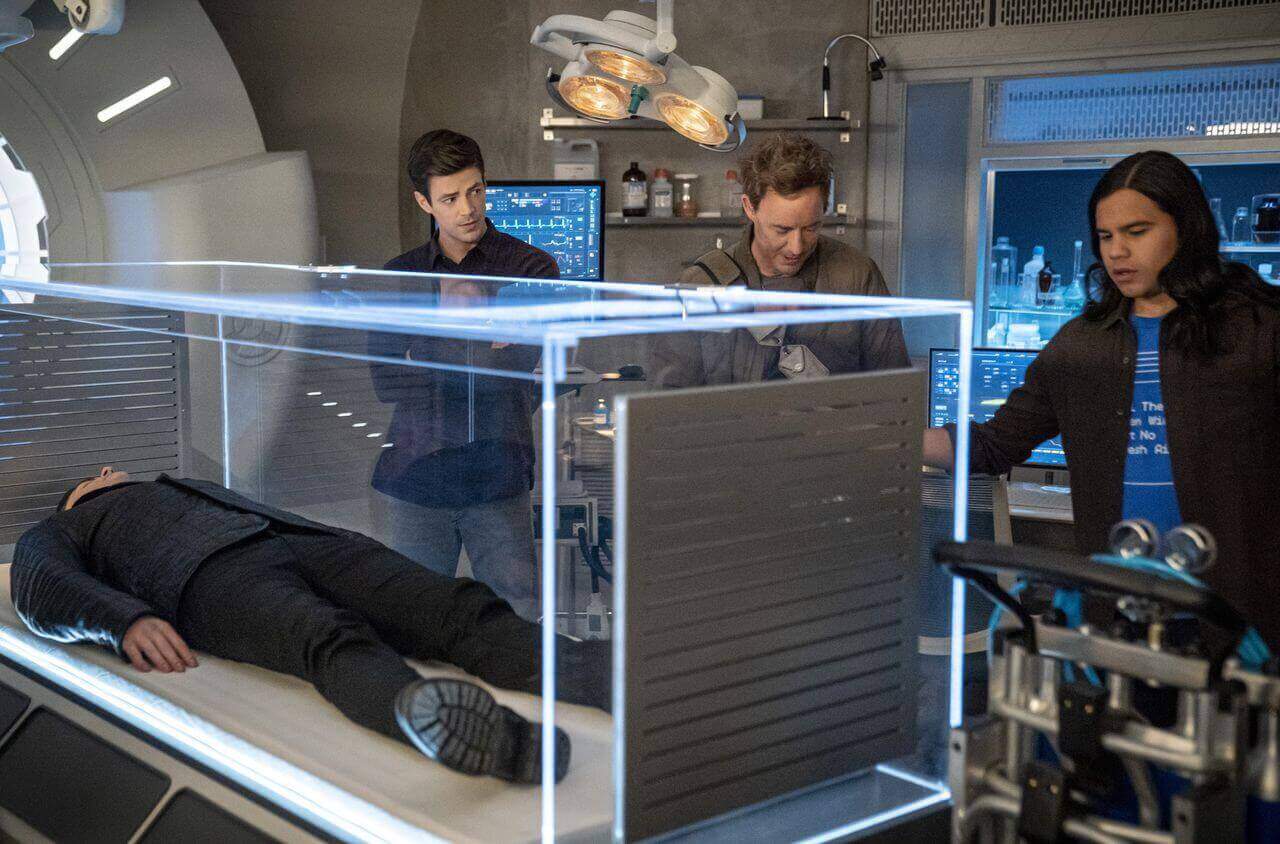 After “Liberation” got things moving, “Pay the Piper” slows The Flash’s momentum down considerably, centering on a subplot introduced early in the season and then mostly forgotten till now. The main plot is on everyone’s minds, but the focus is on a pair of lesser villains while the heroes try to find their determination to save their loved ones. In other words, it’s mostly filler.

Godspeed resurfaces, demanding the Flash’s speed in exchange for letting Central City live another day. Cisco discovers the key to defeating Godspeed in an old enemy. Barry questions whether he’ll be able to save Iris. Cisco loses hope in seeing Kamilla again. Ralph encourages Frost to seek help for her deterioration from Caitlin’s mother.

The opening scene of “Pay the Piper” is far and away my favorite. I had thought Joe going into witness protection was a way to write him out of the rest of the season (and effectively replace him, once more, with… Cecile…), and while that may largely be the case, I’m glad he was Barry’s first stop after his encounter with Iris’ mirror double. While Barry knows Iris is alive, seeing her double disintegrate shook him; he effectively had to watch his wife die, and now he’s faced with having to see it happen again. Barry’s powers are fading and could disappear at any moment, and all that “Your real superpower is your heart” gobbledygook isn’t going to do her much good with the fantastical forces at work. But Joe does what Joe does: he comforts Barry, and he lets him know that his dad will always believe in him. There isn’t a doubt in his mind that Barry will save Iris, and as worried as he assuredly is, he has faith in his son. This is a beautiful moment, and it should have been the final word on Barry’s doubts.

Unfortunately, “Pay the Piper” is all about people doubting themselves and their abilities to save the ones they love, and it takes the entire episode to get them back on the main path. That requires seeking the assistance of Hartley Rathaway, the erstwhile Pied Piper, whose sonic gloves are the key to helping Barry stop Godspeed, who’s shown up like a bad penny. Securing Rathaway’s help is a tall order, though, because, in their last encounter (which Barry doesn’t remember due to Crisis), the Flash accidentally put Hartley’s second in command in a state of… something. Basically, he’s fading out of existence, and only being held in some container can keep him alive. It turns out the henchman was actually his boyfriend – to the shock of no one – and while Rathaway is angry at the Flash, he also blames himself for putting a weapon in the guy’s hands. So now there’s Barry, Cisco, and Rathaway all blaming or doubting themselves over a loved one’s distress.

The subplots in “Pay the Piper” carry this theme too, although they’re so insignificant that they barely register. In the mirror universe, Iris finds Kamilla and, after one of those rote “prove you’re the real version of my friend and not the fake by telling me something only you would know” scenes, Kamilla melts into hopelessness, believing they’ll never get home. Iris is much stronger than that, though, and following a quick pep talk, they resolve to find Singh and escape. Elsewhere, Ralph visits Frost, who wants to just wallow in her misery rather than confront Caitlin’s mother, but Ralph gets her to buck up and do it anyway. Despite its relative meaninglessness, I understand why the mirror universe scene is there; we need to keep up with these characters, even if just briefly. But Frost/Caitlin is so far removed from any of the main plots that her inclusion is simply to have her in the episode. Did we really need this extra step in her journey to fixing herself? I love Caitlin, and I’d miss Danielle Panabaker if she was gone for too long, but spending time with her while giving her nothing to do is a waste.

But that’s pretty much what “Pay the Piper” amounts to: a waste of time. Barry and Cisco need to believe in themselves, and it takes a whole episode for them to get their heads on straight. Since I don’t think Rathaway will have much of an impact on the rest of the season (and don’t care for him as a character in the first place), his predicament with his boyfriend falls flat. We’re reminded that there is strife between Nash and Allegra, and in one of the excruciatingly many scenes where somebody tries to cheer up Barry, he relates his loss of her doppelganger to Barry’s of Iris. I think Nash has a lot of potential as part of the team, but they aren’t using him to great effect yet. This whole thing with Allegra is similar to Harry’s determination to save his daughter in season 2, only not nearly as interesting. Since he brings it up, I’d have preferred if they’d focused on his guilt over his actions during Crisis and how so much of what happened to the universe is his fault. What would that do to a man dedicated to exploration, whose life often hinges on trusting the instincts that failed him and destroyed so many innocent people? Or how about how a man of science and a debunker of myths would be affected by seeing cosmic forces of almost religious scope demolishing entire worlds? Can we do this instead of another father/child arc?

Something about “Pay the Piper” that works much better, though, is Godspeed. I know the “Not another speedster villain!” refrain by heart now, but they do tend to be the better ones. I like Godspeed’s look, and he feels like a threat to Barry. He’s being revealed in bits and pieces, and we still haven’t seen his true face yet. It seems like they’re setting him up to be the next main bad guy, and I’m perfectly fine with that. Or maybe he’ll be integral to developing the new Speed Force, which makes sense considering he’s the only other speedster around who isn’t Reverse-Flash, and his blood appears to be powerful. There’s also that Atlantis tease at the end, but something tells me nothing particularly cool will come of that.

“Pay the Piper” is a filler episode in disguise, with plenty of lip service paid to the season’s main plot, but no real progress made. The lessons about conquering doubt are tedious, the subplots are meaningless, and it’s difficult to care about the Pied Piper’s predicament. Godspeed is pretty cool, though, and hopefully, he’ll be used to better effect down the line.

The Flash – "Pay the Piper"

“Pay the Piper” is a filler episode in disguise, with plenty of lip service paid to the season’s main plot, but no real progress made. The lessons about conquering doubt are tedious, the subplots are meaningless, and it’s difficult to care about the Pied Piper’s predicament. Godspeed is pretty cool, though, and hopefully, he’ll be used to better effect down the line.