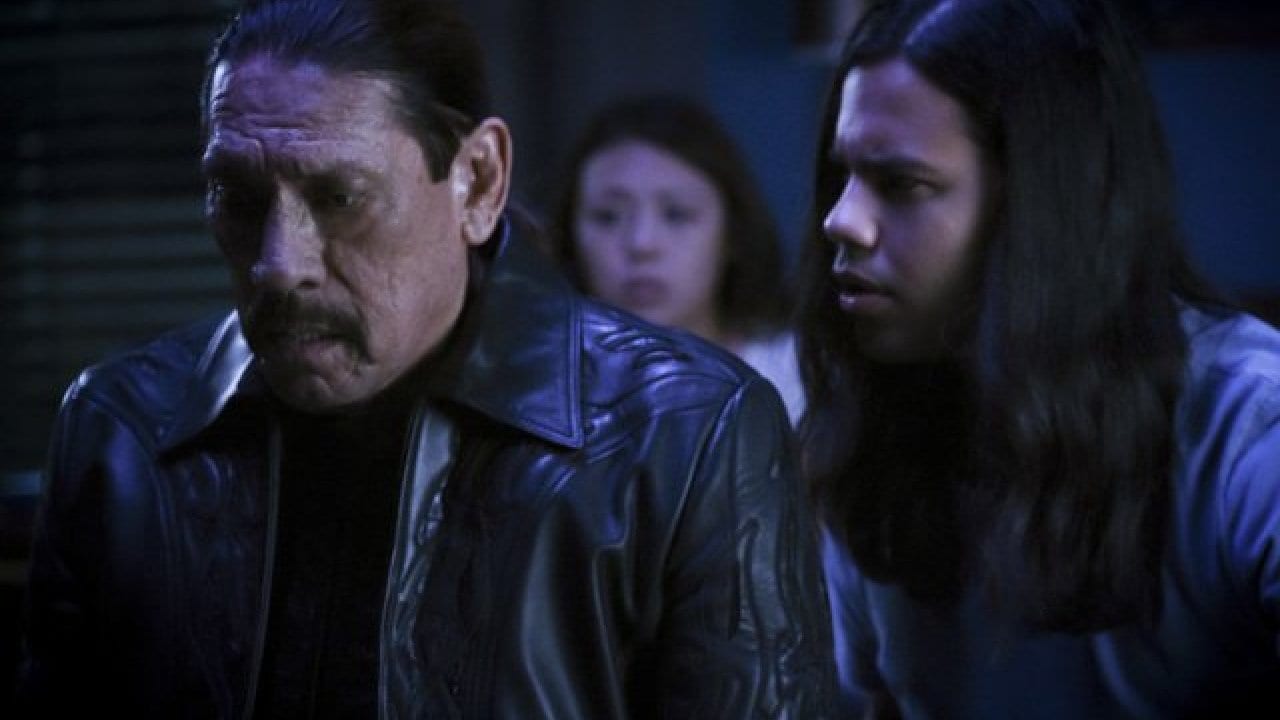 With the 22-episode season inevitably comes some chuffa here and there, and while “Kiss Kiss Breach Breach” isn’t exactly filler – it does tie into the overarching plot and even has a nice, mouth-watering tease courtesy of new Harrison Wells doppelganger Nash – it’s still The Flash spinning its wheels.

Barry and Iris go on vacation, leaving Cisco in charge of Team Flash. As Cisco worries about moving forward with Kamila, a ghost from the past seeks his help. Frost hunts down Ramsey. Joe and Nash find themselves trapped together.

In the face of certain death, Barry decides he and Iris need to get away to enjoy life while they can, so he books them a trip to Tahiti. This leaves Cisco the opportunity to have a trial run at being in charge. However, he’s still got training wheels on in the form of BARI – the Barry Allen Replicated Intelligence, an AI that thinks just like Barry and tells him what he should do in any given situation. One of the problems with “Kiss Kiss Breach Breach” is that you can tell exactly where this is going from the moment BARI is introduced, so you can’t help but spend the episode waiting for Cisco to get on that page. The opening scene is entertaining, with some very funny pop culture references and the revelation of Barry’s favorite movie (which is as much a surprise to him as it is to us), but it’s also one of the bigger thematic road flares in the series’ history. Then an old friend (of sorts) shows up and gives Cisco a gut punch.

Just as Cisco chickens out of telling Kamila that he loves her, Breacher (an always welcome Danny Trejo) returns to Earth-1 and informs him that Gypsy is dead and that he needs Cisco’s help to solve her murder. This puts a damper on “Kiss Kiss Breach Breach” as well; Gypsy was a great character, and she and Cisco made for a fun couple. The confident, closed-off, sexy Gypsy clashed with the nerdy, emotional Cisco, and it allowed for both of them to grow. In contrast, Kamila is dull; she isn’t anywhere near as fun or cool as Gypsy, and whenever she’s around, she feels like a plot device at best, to the point where I actually had to look up her name as I was writing this. Part of “Kiss Kiss Breach Breach” is about Cisco letting go of Gypsy – literally, since she died – and moving on with Kamila. But it falls flat because I don’t believe he’s in love with Kamila. He and Gypsy felt like, as different as they were, they were the only two people who got each other, at least on a romantic level. He and Kamila have nothing approaching that, so it’s difficult to care where they go.

The other main point of “Kiss Kiss Breach Breach” is Cisco learning to trust himself as opposed to relying on Barry (or BARI). “Faith” is the buzzword that gets repeated ad nauseam, and for Cisco, that translates to having faith in himself. When the evidence shows that Cisco murdered Gypsy (in a scene reminiscent of Minority Report), he’s quick to believe the worst in himself and surrender to Breacher and his fellow breach cops. But Kamila gets him to question the evidence, and he discovers that he was framed by a doppelganger. Cisco’s showdown with the real killer – Gypsy’s arch-nemesis Echo – allows him to trust himself even more, and he captures Echo not through physical fighting, but by outsmarting him. Instead of chasing Barry, Cisco needs to be the best Cisco he can be to lead the team, and now he can confidently take Barry’s place after Crisis (which I doubt will happen, or at least not for long). The final affirmation that Gypsy sent herself and Echo to Earth-1 because she trusted Cisco to find her killer doesn’t have the impact they clearly want it to, though, because Echo had just said he brought them to Earth-1 specifically to frame Cisco and trade places with him (which… what?). “Kiss Kiss Breach Breach” feels slapped together, an afterthought with some progression for Cisco forced into it.

The faith theme is evident in Joe and Nash’s subplot, as well. Joe enters “Kiss Kiss Breach Breach” as he enters the underground tunnel to which Nash followed the Monitor last week. Things don’t work out particularly well for the interdimensional relic hunter, though, and soon he and Joe are trapped under a cave-in, left to suffocate if they can’t find a way out in an hour. Nash, who believes in no one but himself, works fruitlessly to get them out, but Joe simply sits and waits, confident that someone will save them. Joe has faith in Barry and his friends, and in one of the episode’s best moments, he tells Nash that he clings to faith because, now that he knows he’s about to lose his son, it’s all he’s got left. What sells the scene is that Joe is unsure of himself, especially when he says he has faith that Barry’s death will be for the greater good; no parent would ever believe that, no matter the result, and Joe is once again the soul of The Flash. But Joe’s faith is rewarded in the immediate situation when Ralph finds them and gets them out in Elongated Man fashion. And the stinger at the end reveals that Joe’s faith may well pay off in the long term as well: Nash claims he knows how to save Barry. “Kiss Kiss Breach Breach” isn’t a particularly good episode, but that tease is irresistible. 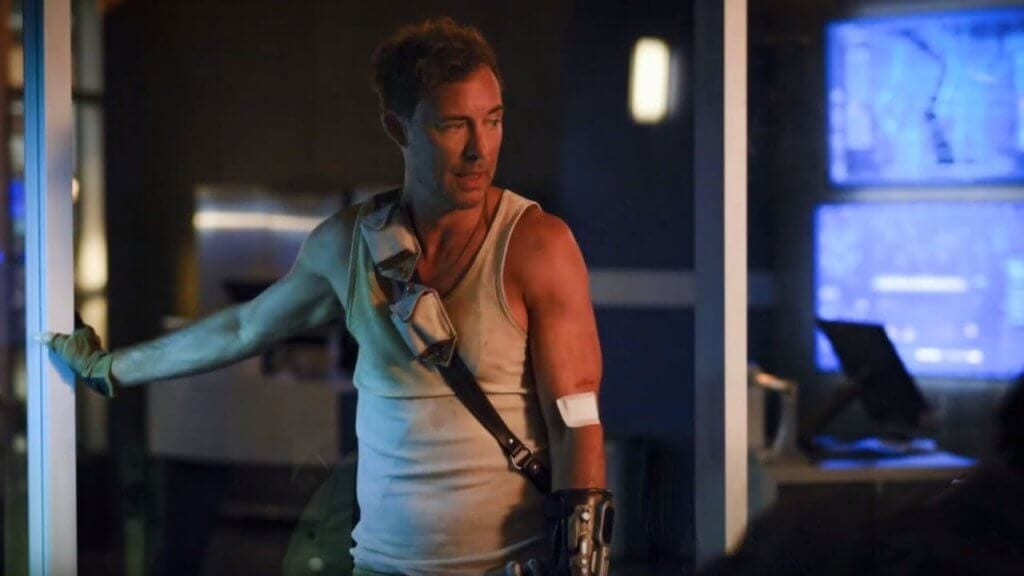 Frost’s subplot with Ramsey tries to tie itself into “Kiss Kiss Breach Breach’s” faith theme, but it doesn’t really gel. She becomes Caitlin again because Ramsey has faith in the girl he thought of as his sister, but he’s… I don’t know, too far gone for faith, I guess. It isn’t clear exactly what they’re trying to say. They just couldn’t find anything for Caitlin/Frost to do and wanted to remind everyone that Ramsey still exists and is a bad guy. He’s now back to saying that he wants to cure the world of death, which makes his jump into full-fledged villainy last week even more frustrating; he should still be at the altruistic part of his arc, but because they showed him become a murderous psychopath, he’s now ping-ponging back and forth as the story needs. As far as him considering Caitlin to be his sister, I’m not buying it. If they’re so close, how come we’ve never heard of him before this season? If he just said they were friends in school, that would be fine, but this is laying it on too thick. I’d have preferred if Frost were a part of Joe and Nash’s story and Ramsey were left out of “Kiss Kiss Breach Breach.” Instead, nothing is furthered or gained by their one scene together.

There isn’t really much to “Kiss Kiss Breach Breach.” Cisco develops in a mediocre plotline, but Ramsey’s arc reverses and stalls, Frost doesn’t learn or progress, and a great character is dispatched off-screen. Joe has a sweet moment of strength through pain, and there are some funny gags, but this is a lackluster episode all around.

There isn’t really much to “Kiss Kiss Breach Breach.” Cisco develops in a mediocre plotline, but Ramsey’s arc reverses and stalls, Frost doesn’t learn or progress, and a great character is dispatched off-screen. Joe has a sweet moment of strength through pain, and there are some funny gags, but this is a lackluster episode all around.