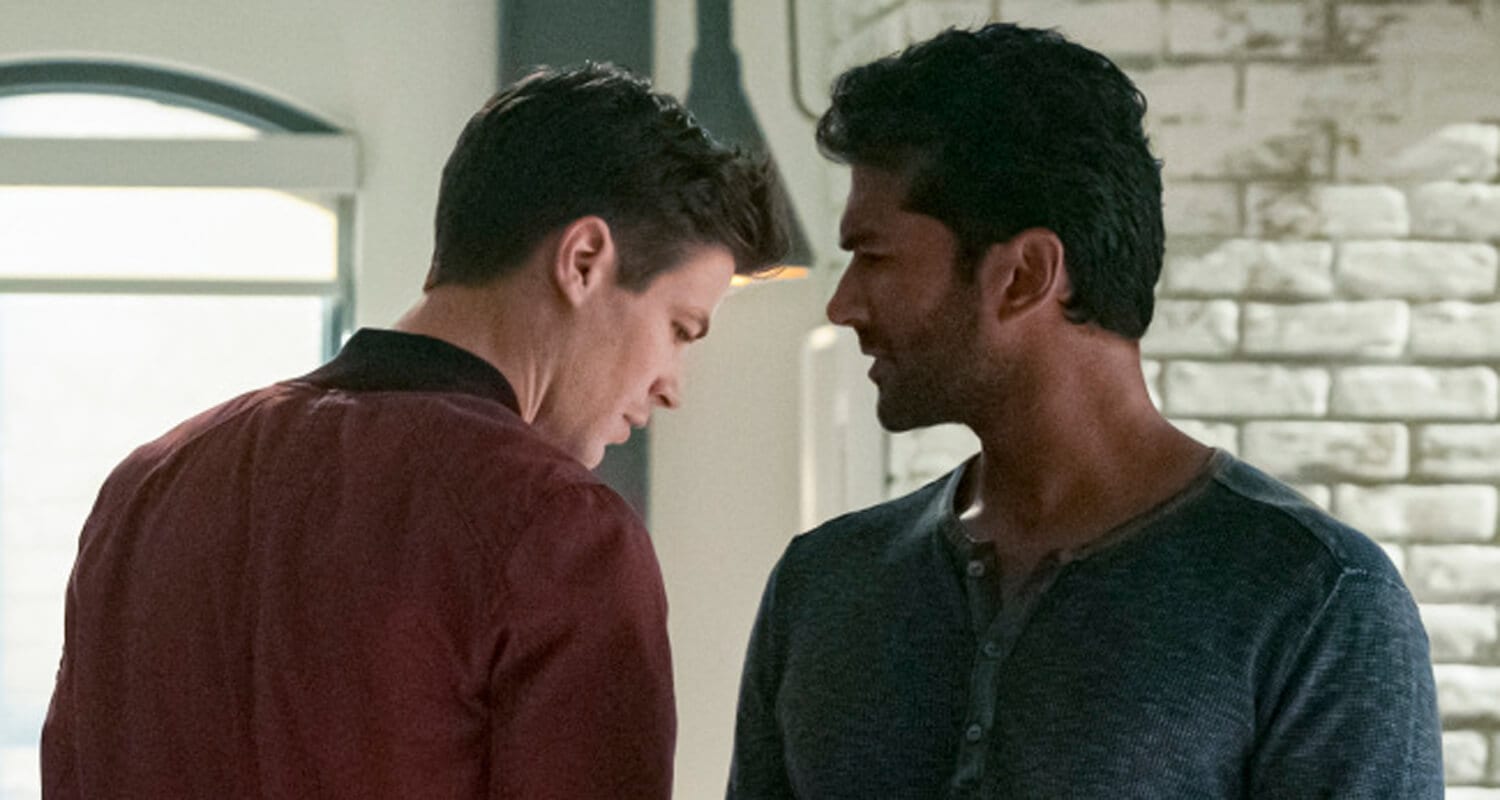 The Flash jumped the gun with the Ramsey Rosso storyline over the past few episodes, but “The Last Temptation of Barry Allen, Part 1” performs some much-needed repairs on season 6’s main arc. It merges the themes of both Ramsey and the Crisis, and it makes Barry even more human in the face of his death.

Ramsey infects Ralph with his Dark-Matter-infused blood; Barry saves him, but the rescue isn’t as clean as he first thinks. Iris gets a lead on the people who created Ultraviolet, but Allegra is more interested in a different story. Frost and Caitlin have to reexamine their deal.

“The Last Temptation of Barry Allen, Part 1” opens with the fight teased last week. Ramsey’s super blood now allows him to stretch his body in the same way Ralph can, so their battle involves lots of rubbery dodging and punching. This is cool in theory, but the execution highlights the episode’s biggest fault: its special effects. Remember how fake and goofy a lot of CGI looked in the late 90s and early 2000s? That was Infinity War compared to Elongated Man vs. Bloodwork. The illusion shatters before they even hit the ground; not for one second do you believe that two people are on the screen fighting each other. Ramsey’s blood, which always looked a little funky, here resembles dark-colored jello more than anything else. The Flash – as well as the other Arrowverse shows – has had some questionable effects over the years, but it can usually be forgiven when considering the limited budgets. Not this time, though; it’s that egregious. Fortunately, pretty much everything else is much better.

“The Last Temptation of Barry Allen, Part 1” is about just that. After using his blood to save Ralph from Ramsey’s little parting gift, Barry becomes infected himself. This was Ramsey’s ultimate goal: to attach himself to the Flash so he could eventually control his nemesis. But Barry is stronger than Ramsey’s usual victims, so it takes more than just Ramsey’s will to enslave him; it takes Barry’s. This results in a battle for Barry’s soul between Ramsey and the Speed Force, which manifests once again as Barry’s mother Nora to keep him on the straight and narrow. The hero being counseled by God and tempted by the Devil is pretty standard fare, but two things elevate it. The first is that Ramsey, as he did at the beginning of the season and hadn’t for the past few episodes, makes a logical and compelling argument. His Dark Matter blood can allow Barry to both save the Multiverse and stay alive, finally allowing him a win without a gut-wrenching sacrifice. Why not at least try? In addition to not losing his own life, how many more people will the Flash save if he makes it through Crisis, especially with blood that can fight death itself? The counter to that is the Speed Force telling Barry that accepting Ramsey’s blood will destroy him, turning him into an unfeeling monster that doesn’t have the heart and soul that make Barry a hero. Would he really want to live as something else, something less? Look what’s become of Ramsey, once a brilliant and dedicated scientist and now a demonic killer spreading death wherever he goes; some clever imagery makes clear that Barry is heading down the path of becoming what he’s spent his life fighting. Both directions have a cost, but which one is too high?

The second is the acting, which is impeccable. Grant Gustin is a marvel in “The Last Temptation of Barry Allen, Part 1,” laying bare Barry’s fear, pain, and, ultimately, anger at being a puppet for cosmic forces that see him as little more than a sacrificial pawn. Barry has succumbed to the toll his heroism has taken on him in the past, but here he is completely broken, admitting that he’s at least as scared as his friends, and outraged that there is a way to save his life that the embodiment of good is telling him to ignore. We know he’s wrong, that only damnation lies with Ramsey, but we still root for Barry as he rails against his duty and his destiny, and it’s all thanks to Gustin and the humanity he gives Barry. Sendhil Ramamurthy is also perfect as Ramsey, walking the tightrope of making the villain arrogant but not annoying. What has made Ramsey so fascinating since he first showed up has been his conviction. He believes he’s the good guy as he tries to sway Barry to his side, and while he understands that he’s committing evil, it’s in service of the greater good. As such, he’s diametrically opposed to Barry, who believes in the immediate good at all times; Barry’s turning is even more powerful for this, and Ramamurthy makes you believe he could convince Barry to abandon his beliefs. And while she’s never mentioned much, Michelle Harrison deserves praise for her portrayal of the Speed Force. When she cries for Barry, she makes you wonder if it’s just an act, part of her embodiment of Nora, or if the unfeeling entity really does care for Barry Allen. I hope this is explored later, and I have no doubt Harrison is up to the challenge. 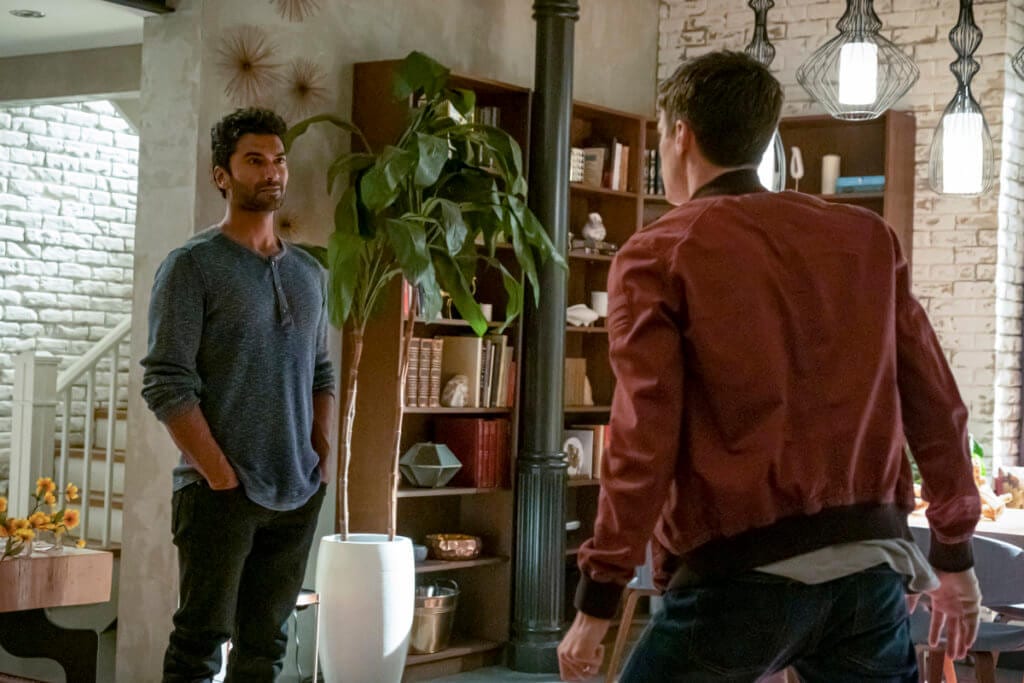 The rest of “The Last Temptation of Barry Allen, Part 1” is lightweight in comparison to the A-plot. Iris realizing she has to face Barry’s death is sad, and Candice Patton is excellent, resisting overplaying Iris’ sorrow and fear (which makes her a great counterpoint to Gustin, who goes for the gusto). I also like that she’s getting her own subplot that revolves around her reporting. However, this particular investigation isn’t very interesting; Ultraviolet is one of those recurring characters you forget exists until she shows up, so the people who made her don’t elicit a lot of excitement. I also don’t much care that Allegra knows Barry is the Flash, or that Kamilla is now on Iris’ team. Conversely, I’m very interested in the continuing conflict between Caitlin and Frost, and wish it had gotten more attention. The divvying up of personalities was always going to be a bumpy road, and I like seeing them have to continue to figure it out as circumstances arise. Frost looks less than thrilled at realizing there are some situations at which she’ll never be as good as Caitlin, and I’m sure this will be picked up later. Nash is around for maybe a minute, but he’s a step closer to finding the Monitor. (It still irks me that no one seems to remember him saying he knows how to save Barry, especially as that was supposed to be the cliffhanger ending for that episode.) But the short shrift some of these get is okay; this is a necessarily focused episode, and an excellent one.

“The Last Temptation of Barry Allen, Part 1” is a sad, emotionally resonant episode that brings back the moral quagmire at the heart of the Ramsey arc and ties it to Crisis. The acting is superb, and despite some awful CGI and undercooked subplots, it’s a strong chapter of The Flash’s sixth season.

The Flash – "The Last Temptation of Barry Allen, Part 1"

“The Last Temptation of Barry Allen, Part 1” is a sad, emotionally resonant episode that brings back the moral quagmire at the heart of the Ramsey arc and ties it to Crisis. The acting is superb, and despite some awful CGI and undercooked subplots, it’s a strong chapter of The Flash’s sixth season.