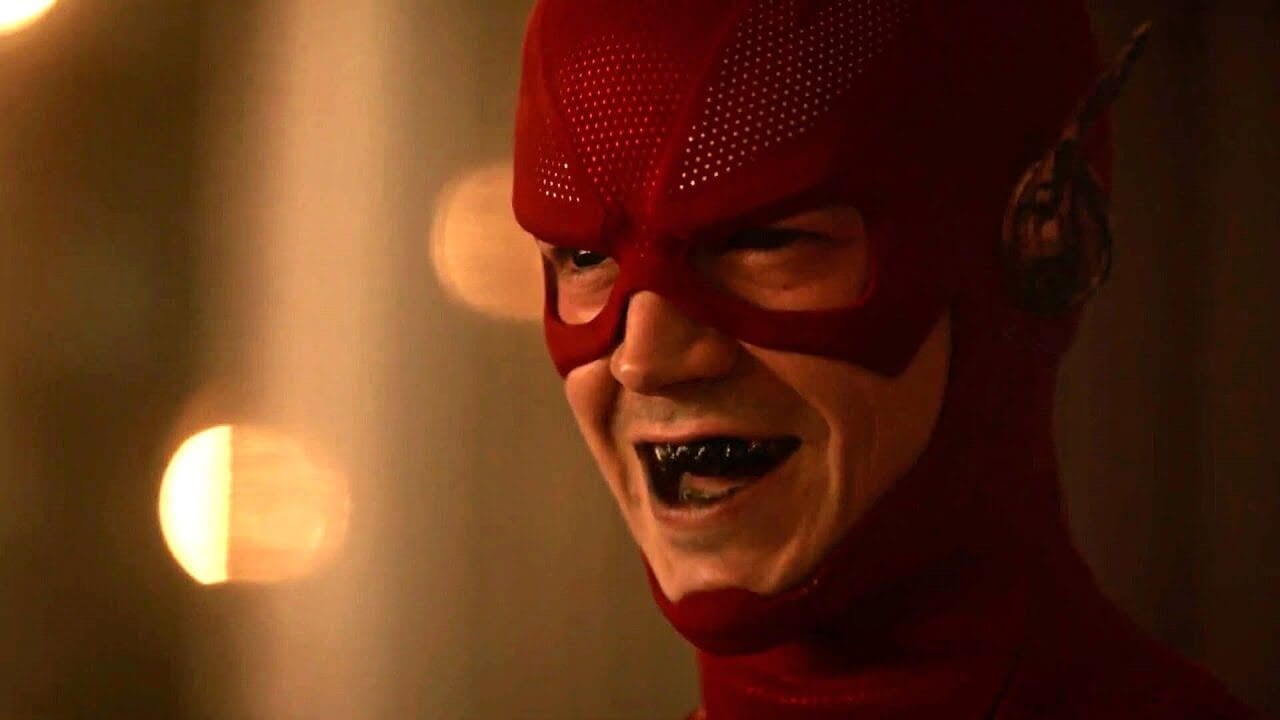 “The Last Temptation of Barry Allen, Part 2” is a bit of a fumble, erasing what was a fascinating plot development from last week and bringing a disappointing end to the first half of the season. It isn’t bad, and there are some good moments and fine pieces of acting, but it could have been much more than it is.

With the Flash under his thrall, Ramsey Rosso – now proudly calling himself Bloodwork – initiates his plot to “cure” everyone in Central City. While Joe and Frost attempt to contain those infected, Cisco and Iris try to bring Barry back and stop Rosso, but they disagree about which is the priority. Nash seeks entry to the Monitor’s realm. Cecile and Kamilla are also present and do stuff, or something.

“The Last Temptation of Barry Allen, Part 2” had an excellent setup. With Barry having been turned, Ramsey is essentially unbeatable. Worse, this is a choice Barry made, finally giving in to his fear and anger, and losing his soul as a result. Now, Ramsey is turning everyone he comes across into one of his zombie-like minions, and the Flashless Team Flash can’t keep up with him. The best part about this is that, even without Barry, his philosophy is still embedded in his friends. They refuse to kill a single one of Ramsey’s army because of their innocence, but the result is that they’re quickly overwhelmed. Ramsey, on the other hand, has no such qualms. He’s the scariest kind of monster: one who believes he’s right, and that he’s the savior of mankind. If he has to kill a few people to conquer death itself, he’ll do it, and call himself a hero while he does.  How does one stand against a force that driven without the Flash?

It turns out they don’t have to because they had the Flash on their side all along! See, Barry never had that moment of weakness that further humanized him and made the Arrowverse’s most relatable character even more relatable. He knew what Ramsey was up to the whole time and allowed himself to be consumed by Bloodwork so he could pull the old switcheroo on Ramsey and defeat him from inside the hive mind. That also means that the Speed Force we saw acting human in the guise of Barry’s mother was just an illusion created by Ramsey to manipulate Barry, and it didn’t work because Barry is now Batman and was onto that silly billy from the beginning. Remember being conflicted over Barry’s rage when told he could survive the Crisis, but the universe’s force for good wanted him to die anyway? Remember how you almost wanted Barry to tell his godlike mentor to pound sand because he’s lost so much and is now being asked to give up everything? Remember how wrenching it was to see the Speed Force actually cry for Barry because it indicated that the Speed Force was beginning to see him as a son? Remember the outstanding performances from Grant Gustin, Sendhil Ramamurthy, and Michelle Harrison? Yeah, none of that matters anymore. Hope you weren’t too emotionally invested or anything.

On top of that, the Ramsey storyline is over now. “The Last Temptation of Barry Allen, Part 2” sees his defeat and incarceration at ARGUS, and the way is paved for “Crisis on Infinite Earths.” The rushed nature of this plot makes it clear that Ramsey was never intended to be anything other than a means to get Barry ready for his sacrifice in the Crisis. That’s a shame because this premise was rich enough to cover an entire season. They sped past the ethical dilemmas and went straight to making Ramsey a traditional supervillain because he was just there to serve the crossover. And even as a supervillain, Ramsey isn’t well-realized. He mostly just stands around while his drones do all the work. He gets zapped by that doohickey of Cisco’s, but semi-kinda-not-really-evil Barry bails him out. Then he’s incapacitated by some random STAR Labs ray gun (which makes you wonder why they didn’t just do that in the first place) before escaping (because of course nobody was keeping an eye on the insanely powerful blood demon) and literally turning into a giant monster, because I guess the metaphor was too difficult to follow without having it spelled out for us with questionable CGI. Barry showing Ramsey his mother is a nice parallel to the previous episode, but she ends up just being a distraction so Barry can grab him and lock him up. Perhaps the worst part of this, though, is that Cicada got a whole season to himself while Ramsey is done in eight episodes. 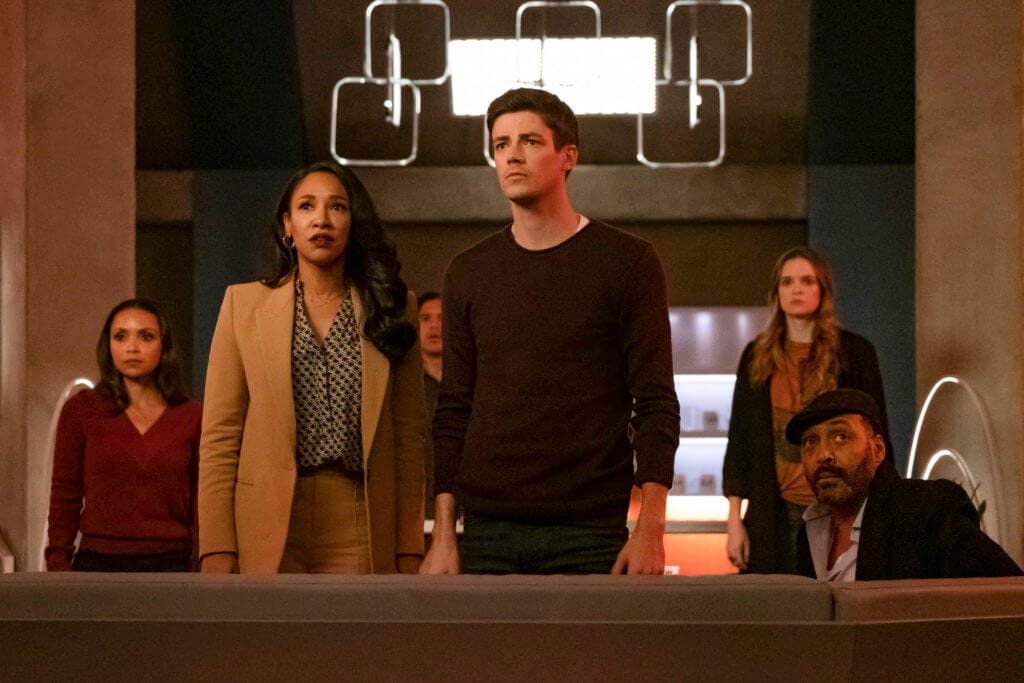 The subplots – with one exception – have more success than the final battle against evil, which is good because they give “The Last Temptation of Barry Allen, Part 2” enticing plot and character work when it desperately needs some. Iris and Cisco are at odds with how to handle Barry’s turn to evil (such as it is), and their disagreement is a microcosm of the greater good vs. the immediate good conflict that fuels the show. Cisco believes it’s necessary to sacrifice Barry – or, at least, to accept his death – to save the world from Ramsey, something they’ve all been preparing to do anyway. Iris, of course, won’t give up on her husband, even when every rational argument demands that she let him go. I know the Arrowverse shows get a lot of flak for their CW relationship drama, but when it’s as strong as that of Barry and Iris (usually), it makes the superhero action even better. I buy that Iris would defy logic because she believes in Barry, and while the payoff for that ruins the previous episode’s conflict, it means the world to these two people. Cisco’s devotion to Barry is as real as Iris’, but it takes the form of honoring the man who wants Cisco to succeed him. Frost and Caitlin develop further, with Caitlin pushing Frost to be better, not to give up and tag in Caitlin when things look bad, and Frost recognizing that Caitlin needs to be with Barry on what may be his last night on Earth. Whatever happens in the second half of the season, I’m glad this duality has room to grow. I’m also looking forward to seeing what happened to Nash. Does he somehow become the Anti-Monitor? That would be a neat twist; in his zeal to stop the evil threatening the Multiverse, he becomes the threat. But it could be something else entirely. Cecile and Kamilla hiding from Ramsey’s zombies like they’re in a horror movie might have been fun if either of these two were interesting. Same goes for Allegra using her powers to stop Ramsey’s blood; it’s a fine plot point, but she’s such a flat character that it doesn’t mean much beyond that.

“The Last Temptation of Barry Allen, Part 2” is a disappointing end to a once-promising half of a season. Some of the subplots are intriguing, but the main storyline is a copout that ruins a terrific setup from last week, and Ramsey Rosso never lives up to his villainous potential. Next week, we’ve got “Crisis on Infinite Earths” to look forward to; then, we can hope that the rest of the season is more satisfying.

The Flash – "The Last Temptation of Barry Allen, Part 2"

“The Last Temptation of Barry Allen, Part 2” is a disappointing end to a once-promising half of a season. Some of the subplots are intriguing, but the main storyline is a copout that ruins a terrific setup from last week, and Ramsey Rosso never lives up to his villainous potential.