“You are a good man, Cisco Ramon.” 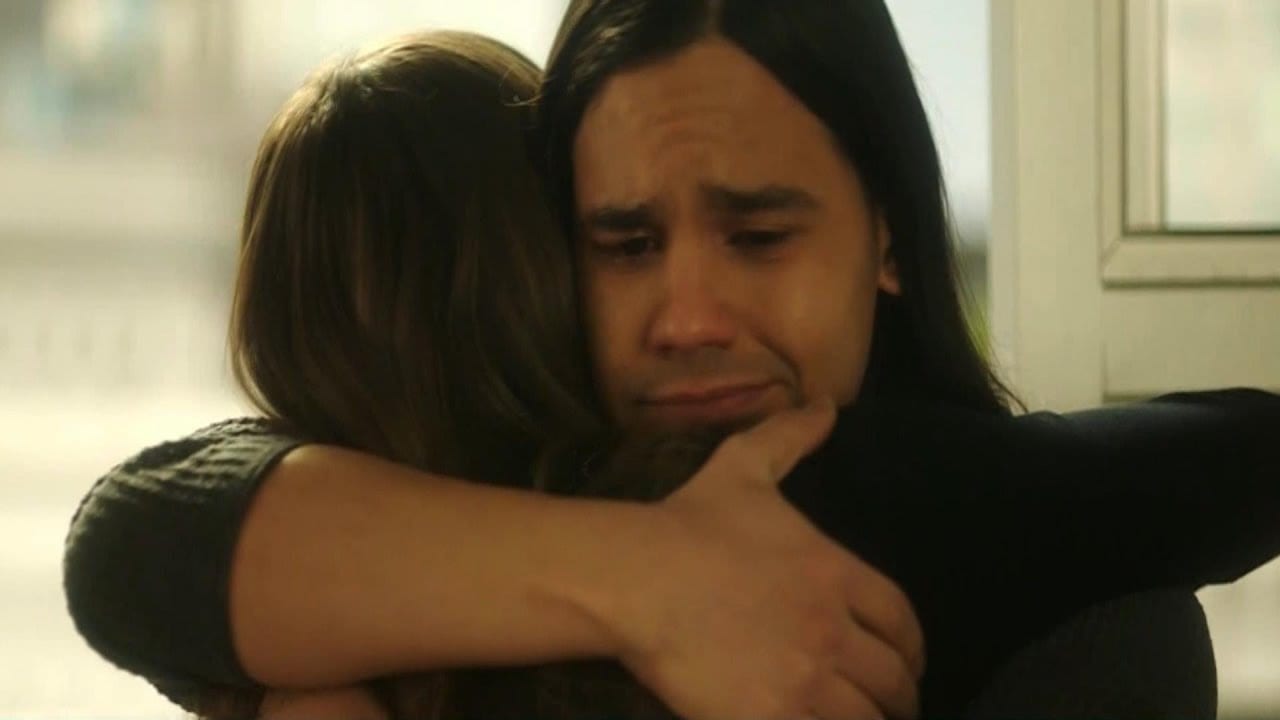 Why does The Flash insist on sending off its departing stars with lackluster episodes? Harrison Wells got the dull, weightless “All’s Wells That Ends Wells,” and now Cisco is stuck with “Good-Bye Vibrations” (because he used to be Vibe, hardy-har-har). While the final moments are fitting for Cisco’s last night in Central City, the rest of the tedious hour features another in a long line of lame-o villains, tired clichés about farewells – the “twists” of which anyone would see coming a mile away – and humor so broad it falls flat in a show that was never exactly dry in its wit.

Cisco and Kamilla announce that they’re leaving Central City but feel slighted by their friends’ response. A newer version of Rainbow Raider uses the color spectrum to assist in her robberies but elicits a different emotion than her predecessor. Iris and her Citizen team have the barest minimum of a subplot so that we can pretend that Kamilla is an important character who needs a proper send-off as badly as Cisco.

“Good-Bye Vibrations” cuts right to the chase – as much as you can call it that when everyone watching has known Carlos Valdes was leaving for at least a month now – and opens with Cisco and Kamilla telling Barry, Caitlin, and Iris that they’re moving away from Central City. This occurs in the same location as when Barry, Allegra, and Chester ruminated on Wells’ death, and that’s appropriate because this scene is pretty underwhelming too. Partly, that’s the point; Cisco’s friends react by having no reaction, treating his exit from their lives as just another thing that happened that morning. If you think you know where this is going, you’re almost surely right.

Cisco thinks his friends don’t care about him and maybe even want to see him go, but they’re really just putting on a brave face for his sake. “Good-Bye Vibrations” has no surprises in that department, although it feels like the writers want you to believe that Barry and Caitlin don’t care about losing their best friend until it’s all revealed to be a wacky mix-up. I have to wonder if they finished writing the scenes where Caitlin asks for Cisco’s passwords or Barry suggests he use his coming position at ARGUS to help them beef up their lab tech and said, “We got ‘em.” We know what’s going on because we know these characters, we’ve seen any TV show ever, and we’re smarter than a peach pit, so watching this rote plot play out is duller than getting socks for Christmas.

Or maybe they did know how ineffectual all this was, because “Good-Bye Vibrations” features a villain who makes people super happy. The new Rainbow Raider – a woman named Carrie Bates – uses the full spectrum rather than just red, and the result is a sense of euphoria that leaves her victims open to suggestion. This allows her to convince them to let her rob banks. No points for guessing whether she uses this on the heroes at some point. Sure enough, first Cisco and then Barry are zapped by her color beam, and they act over-the-top zany, and it’s really not funny. Cisco is even more animated than usual, meaning he essentially becomes Chester (Is this a commentary on Chester becoming the new Cisco? Does that make the drawn-out speech and hand-waving body exaggerations any less annoying?), and he does stupid things like projecting images of cats onto Barry’s view screen while he’s rushing into action. Then, when Barry gets zapped, he… breakdances. The only good thing about this nonsense is that it’s over quickly. 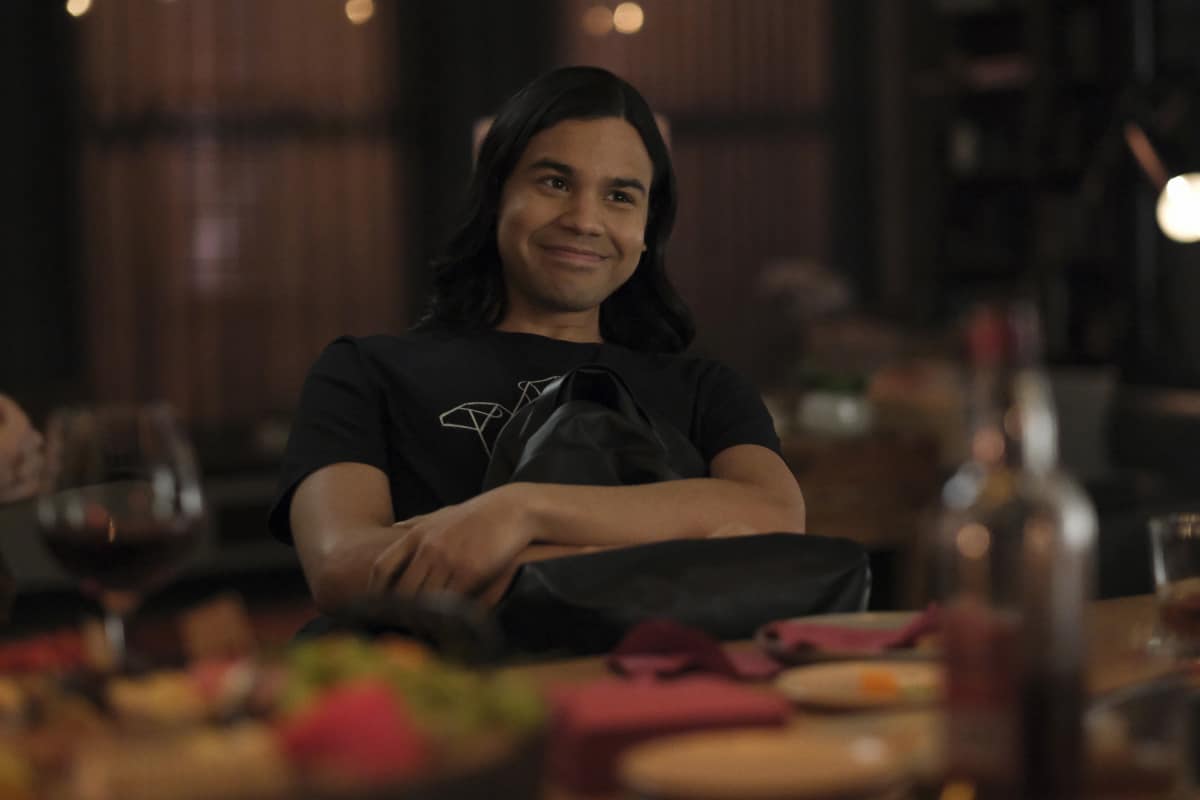 Perhaps the worst part about the Rainbow Raider plot is that it could have been good. As with seemingly every villain on The Flash of late, she turns out not to be evil, but a Good Samaritan who uses her stolen money to help people in dire financial straits. When Barry finally catches up to her, she tells him that she’s who saves people once he leaves the scene of a crime, picking up the pieces for the victims of “the system.” This is an excellent opportunity to challenge Barry’s morality, to make him wonder if putting a stop to Rainbow Raider would hurt more people than it helped, and if maybe he needed to expand the scope of his heroics. Instead, he instantly comes up with the idea of getting the mayor to put her on an economics task force because city governments often hire bank robbers with no experience or knowledge of economics to work on an expensive committee. This reminds me of a plot point in an episode of Lois & Clark (which I discuss here), where Superman convinces a bank to hire a would-be robber. The difference is, the man from Lois & Clark has not yet committed a crime and has a history of security work, so it isn’t as hard a sell as the woman who almost crashed a blimp into a football game in front of a million witnesses.

That’s right; the climax of “Good-Bye Vibrations” goes full Black Sunday because they need to give Cisco something heroic to do in his final episode but stuck him with a villain who isn’t really a villain because The Flash is all about hugging out your differences now. So Cisco has to figure out how to steer the blimp – which Rainbow Raider is using to drop her loot over the city because helping people one-by-one is, like, so way hard and stuff – away from the football game and pray Thomas Harris doesn’t sue them. And he does, with some “Mecha-Vibe” technology because he gave up his powers, but the show wants to have its cake and eat it too. Remember when Angel sent off lovable sidekick Doyle with the incredible “Hero”? The villains were an army of demon Nazis called the Scourge (it isn’t as stupid as it sounds), and Doyle went out not only saving a bunch of innocent people but his best friend and the woman he’d just begun to love. I’m not saying Cisco needed the leave in the exact same way – Lord knows I don’t want him to die – but there’s got to be something between that and this goofy mess. 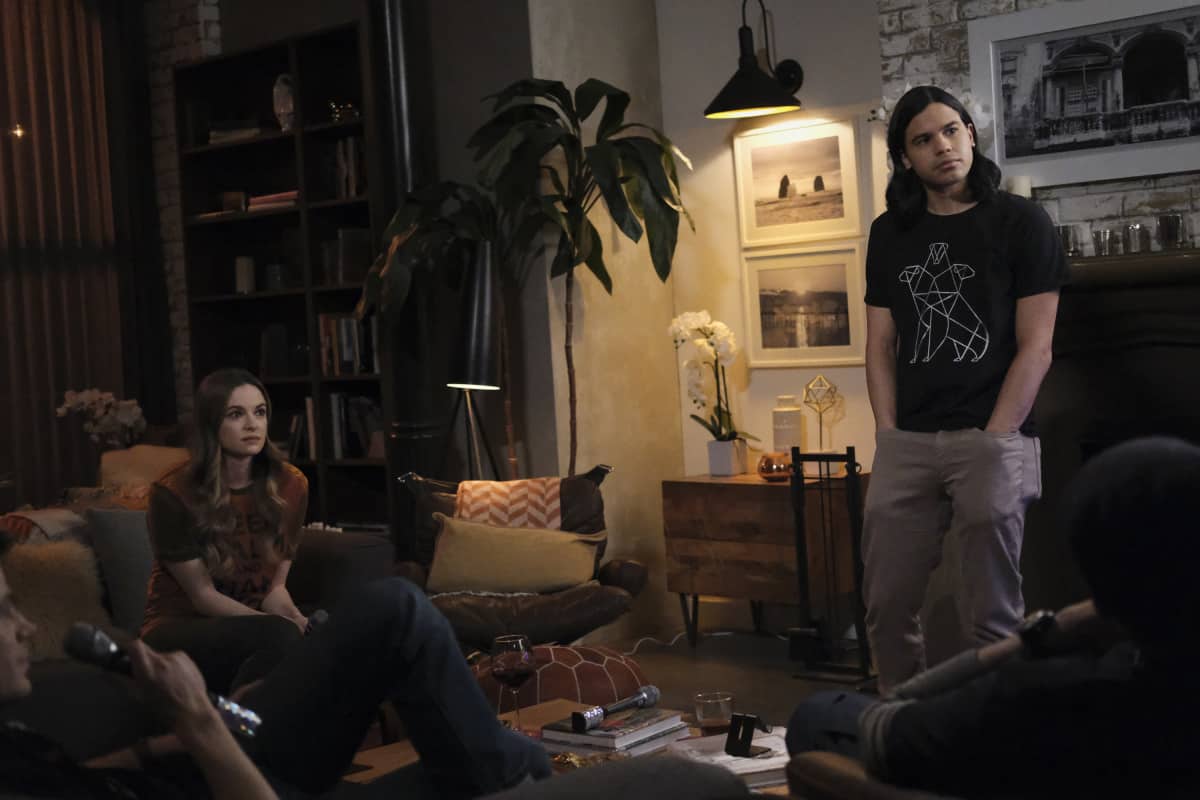 However, I did thoroughly enjoy the going-away party that ends “Good-Bye Vibrations.” Joe finally shows up (we get tons of Chester but next to none of someone who’s spent years becoming Cisco’s friend) and raises the emotional highs the way only he can, Cisco gives everyone a novelty t-shirt, and they end the night singing “Poker Face” together on a karaoke machine. It feels right, it feels in character, it’s a nice callback to the pilot, and it’s much funnier than anything that happened while Cisco and Barry were hypnotized with happiness. I’m also glad it was just these characters; it would have been nice if Iris were there, but she’s busy throwing Kamilla a party of her own because Kamilla apparently had no friends until she met Cisco. (And Cecile takes a group selfie with herself in the foreground and Kamilla pushed to the side; God, I hate Cecile.) There’s also a stinger at the end where Cecile talks to a face in a mirror that looks like a cross between Iron Man and the Predator – or maybe an armored version of the Blank from Dick Tracy – that threatens to make her a major part of the season’s final arc. Presumably, this “villain” will be a guy who rescues puppies and kittens and just needs a hug from the Flash.

“Good-Bye Vibrations” is a boring, silly, disappointing send-off for a beloved character. The villain is a lightweight, the threat feels artificial, the humor sinks like a rock in a pond, and the response to Cisco’s departure is not the surprise they think it is. I hope Carlos Valdes feels slighted by this because he deserved much better.

“Good-Bye Vibrations” is a boring, silly, disappointing send-off for a beloved character. The villain is a lightweight, the threat feels artificial, the humor sinks like a rock in a pond, and the response to Cisco’s departure is not the surprise they think it is. I hope Carlos Valdes feels slighted by this because he deserved much better.